Electric field can be considered as an electric property associated with each point in the space where a charge is present in any form. An electric field is also described as the electric force per unit charge.

The formula of electric field is given as;

E is the electric field.
F is a force.
Q is the charge.

What is Electric Field?

The electric field is defined mathematically as a vector field that can be associated with each point in space, the force per unit charge exerted on a positive test charge at rest at that point.

r1,0 is the unit vector in the direction from point x1 to point x0

Electric field can be found easily by using Gauss law which states that the total electric flux out of a closed surface is equal to the charge enclosed divided by the permittivity.

Or total flux linked with a surface is 1/ ε0 times the charge enclosed by the closed surface.

The electric field can also be calculated by coulomb’s law but the Gauss law method is easier. Besides, Gauss law is just a replica of the coulomb’s law. If we apply Gauss theorem to a point charge enclosed by a sphere, we will get to coulomb’s law.

These include a few steps.

Let, a point charge Q be placed in a vacuum. Then if we introduce another point charge q (test charge) at a distance r from the charge Q.

Then the electric field at point p due to the point charge Q is given by,

Then our definition for electric field modifies to,

According to this definition,

The electric field at point P due to point charge Q is,

Electric Field Due to Line Charge

A line charge is in the form of a thin charged rod with linear charge density λ. 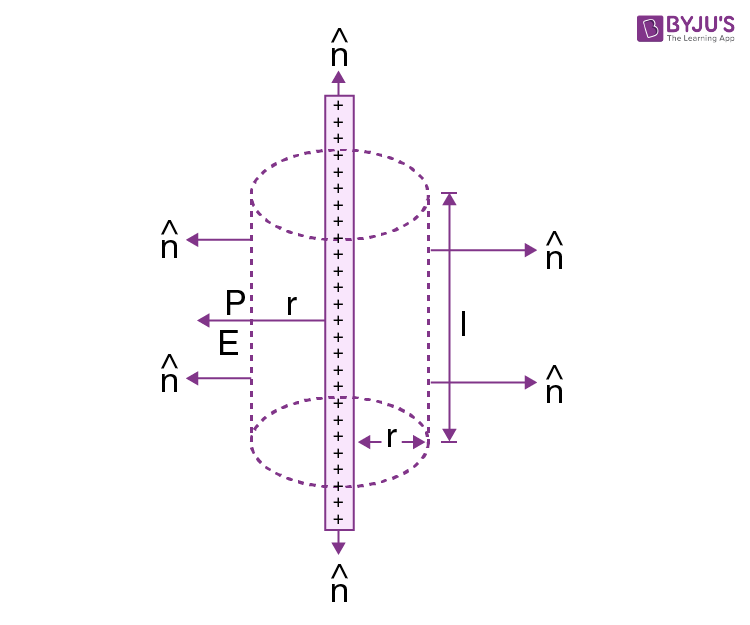 To find the electric intensity at point P at a perpendicular distance r from the rod, For that, let us consider a right circular closed cylinder of radius r and length l with an infinitely long line of charge as its axis.

The magnitude of the electric field intensity at every point on the curved surface of the Gaussian surface (cylinder) is the same since all points are at the same distance from line charge.

Therefore, the contribution of the curved surface of the cylinder towards electric flux,

2 Π rl is the curved surface area of the cylinder.

Electric Field Due to Ring

We want to find the electric field at an axial point P due to a uniformly charged ring as shown in the figure,

The centre of the ring is at point O.

The circumference of the circle makes an angle θ with line OP drawn from the centre of the ring to the point P.

Now consider a small element from the ring as dq, Now calculate the field at point P due to this charge element,

We know that the electric field at point P is,

The direction of the field is along AP. So by resolving it, we get one along the positive x-direction and another along negative y-direction as shown above figure.

The x component of the electric field due to charge element dq is,

The y component of the electric field due to charged element dq is,

To calculate the total electric field at point P due to charge ring we need to integrate dE over the ring,

The direction of the field is along OP.

Here we need to consider that the charges are distributed continuously over a length or a surface or a volume.

If the total charge carried by an area element is equal to Δ Q, then the charge density of the element is,

Similarly, in the case of charge distribution along the line segment of length Δl, the linear charge density is,

Similarly, in case of charge distributed along with a volume element Δv, the volume density can be given by,

Now let us consider a case of the continuous charge distribution we will calculate the electric field due to this charge at point P. Here we need to divide the body into different elements and then consider one element of volume Δv whose charge density is ρ. Then let the distance of the volume element from point P is given as r. Then charge in the volume element is ρ Δv. Then the electric field is,

Electric Field due to a Uniformly Charged Sphere

Let σ be the uniform surface charge density of sphere of radius R.

Let us find out electric field intensity at a point P outside or inside the shell.

Field Outside the Shell

We have to find the electric field intensity at a point P outside the spherical shell such that, OP=r.

Here we take gaussian surface as a sphere of radius r.

Then the electric field intensity is the same at every point of gaussian surface directed radially outwards,

So, according to Gauss’s theorem 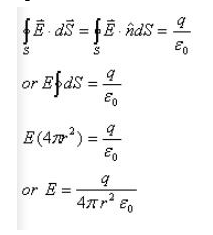 So it is clear that electric intensity at any point outside the spherical shell is such as if the entire charge is concentrated at the centre of the shell.

Field at the Surface of the Shell

If σ C/m2 is the charge density on the shell,

Field Inside the Shell

If the point P lies inside the spherical shell then the gaussian surface is a surface of a sphere of radius r.

As there is no charge inside the spherical shell, the Gaussian surface encloses no charge. That is q = 0.

Hence the field inside the spherical shell is always zero.