English is an interesting subject and a language that connects the globe. It is a crucial subject to study and practise. Hence, students need to study the subject right from the beginning of the academic year. Our subject matter experts have prepared the answers in an elaborate manner with the aim of helping students to come out with flying colours in the exams. These solutions help students to understand the method of answering the questions in an effective manner.

Chapter 7 Topsy-turvy Land and Gulliver’s Travels has detailed answers which clears the confusion of the students instantly. Practising the textbook questions on a daily basis helps students to fetch more marks in the exams. 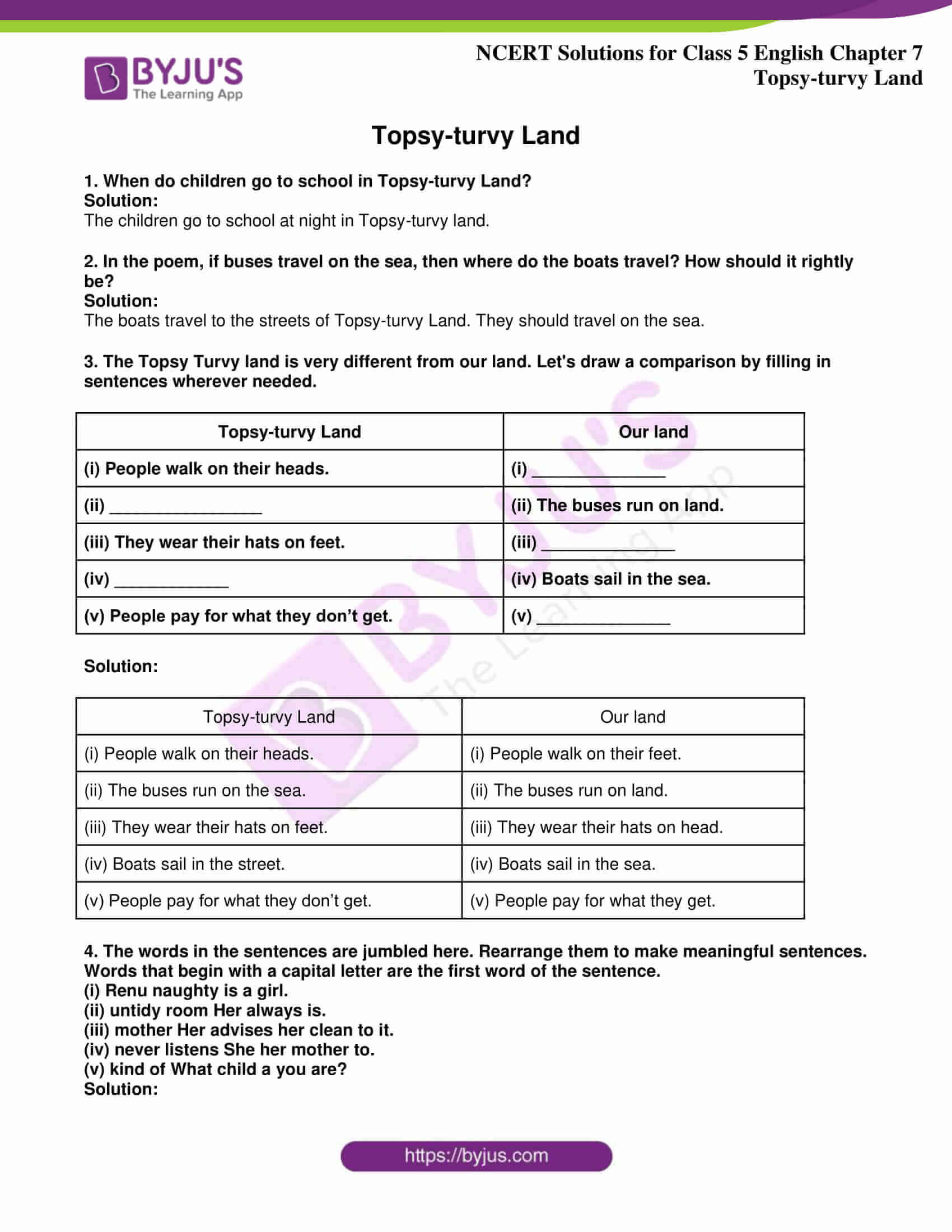 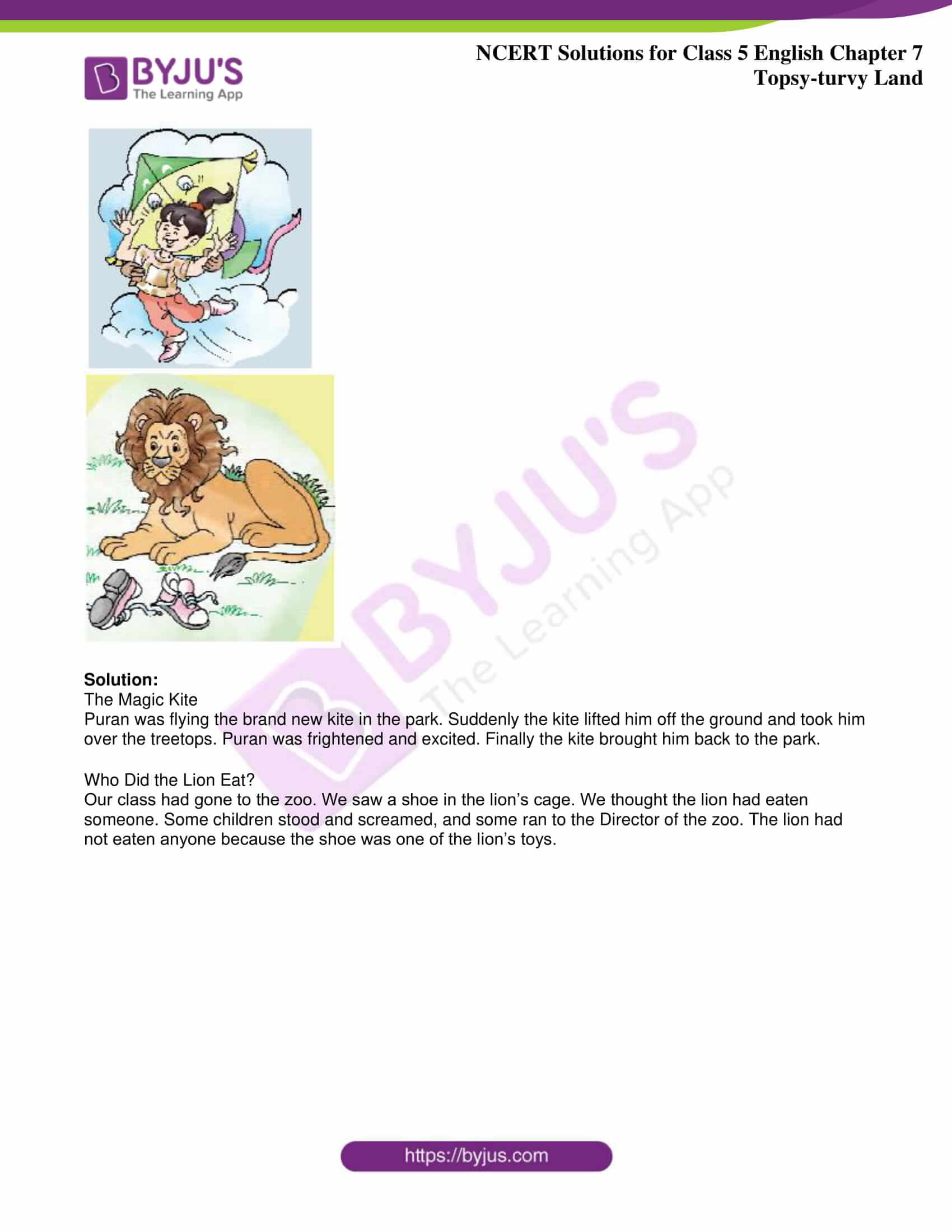 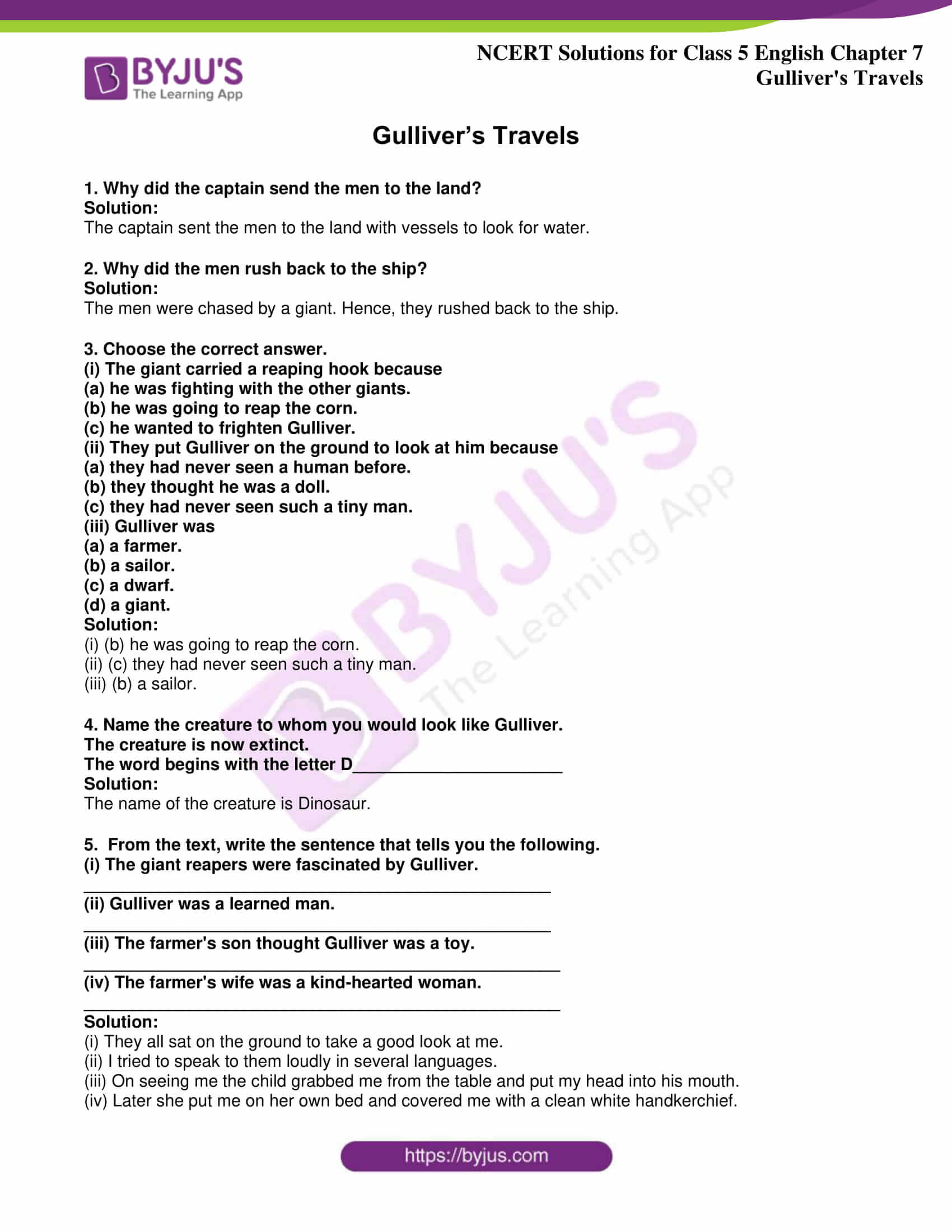 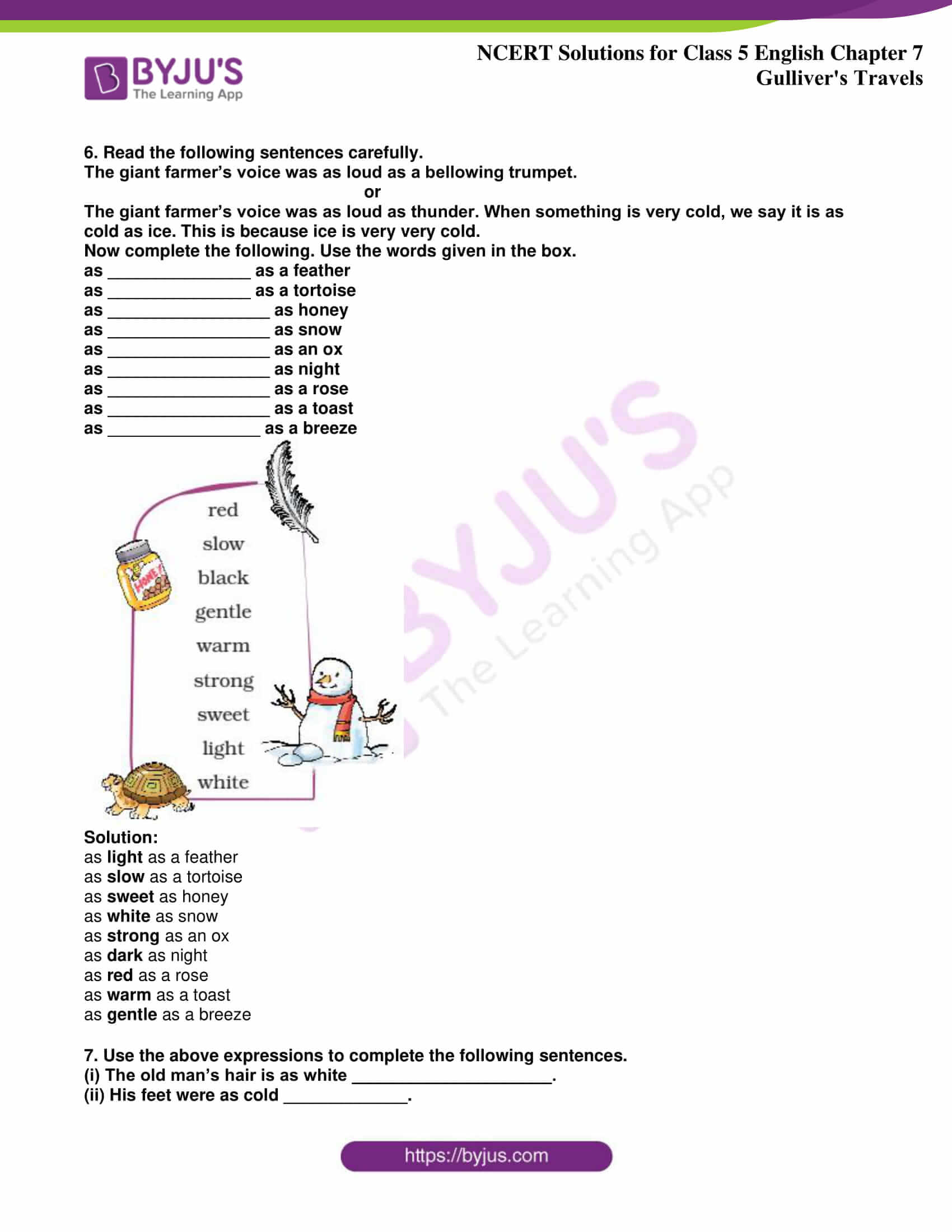 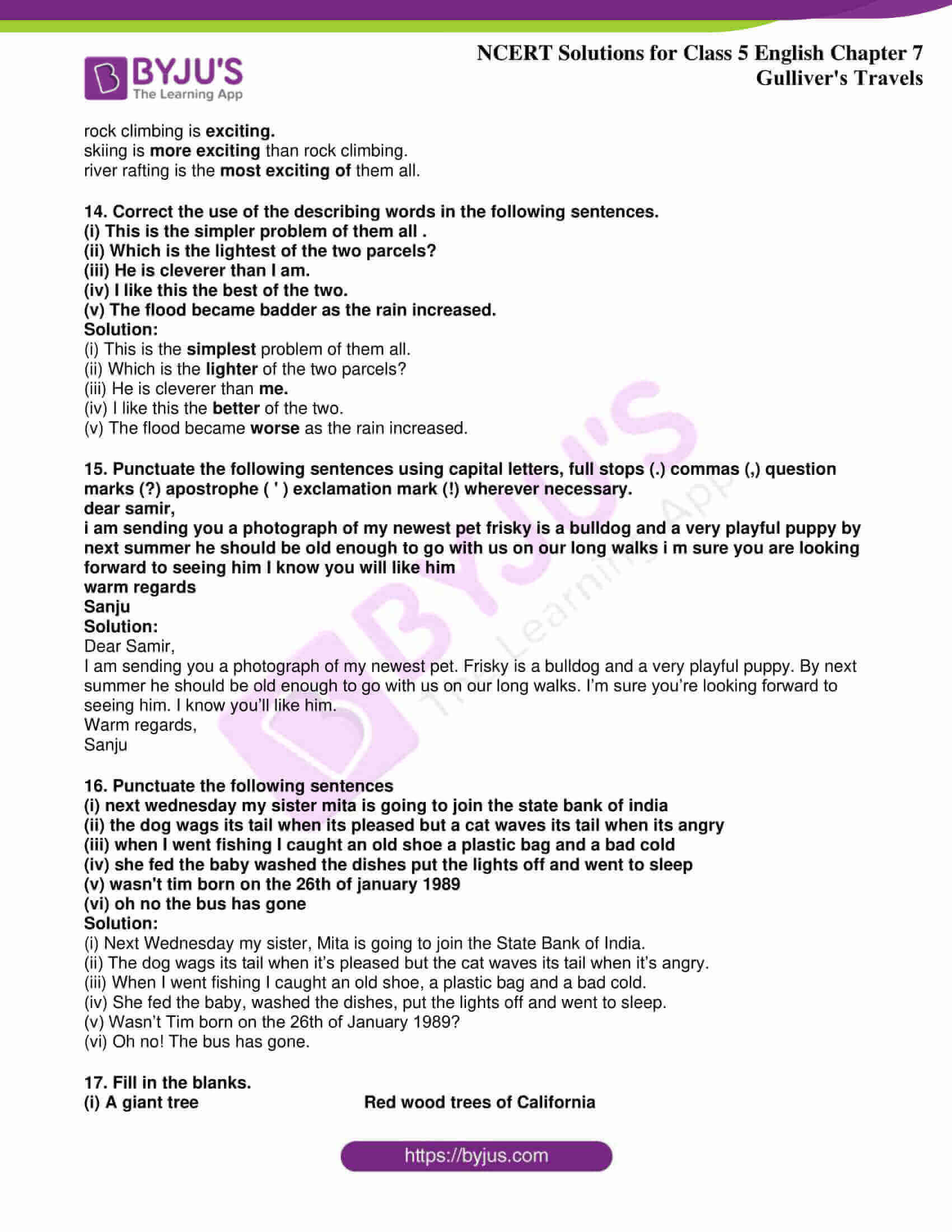 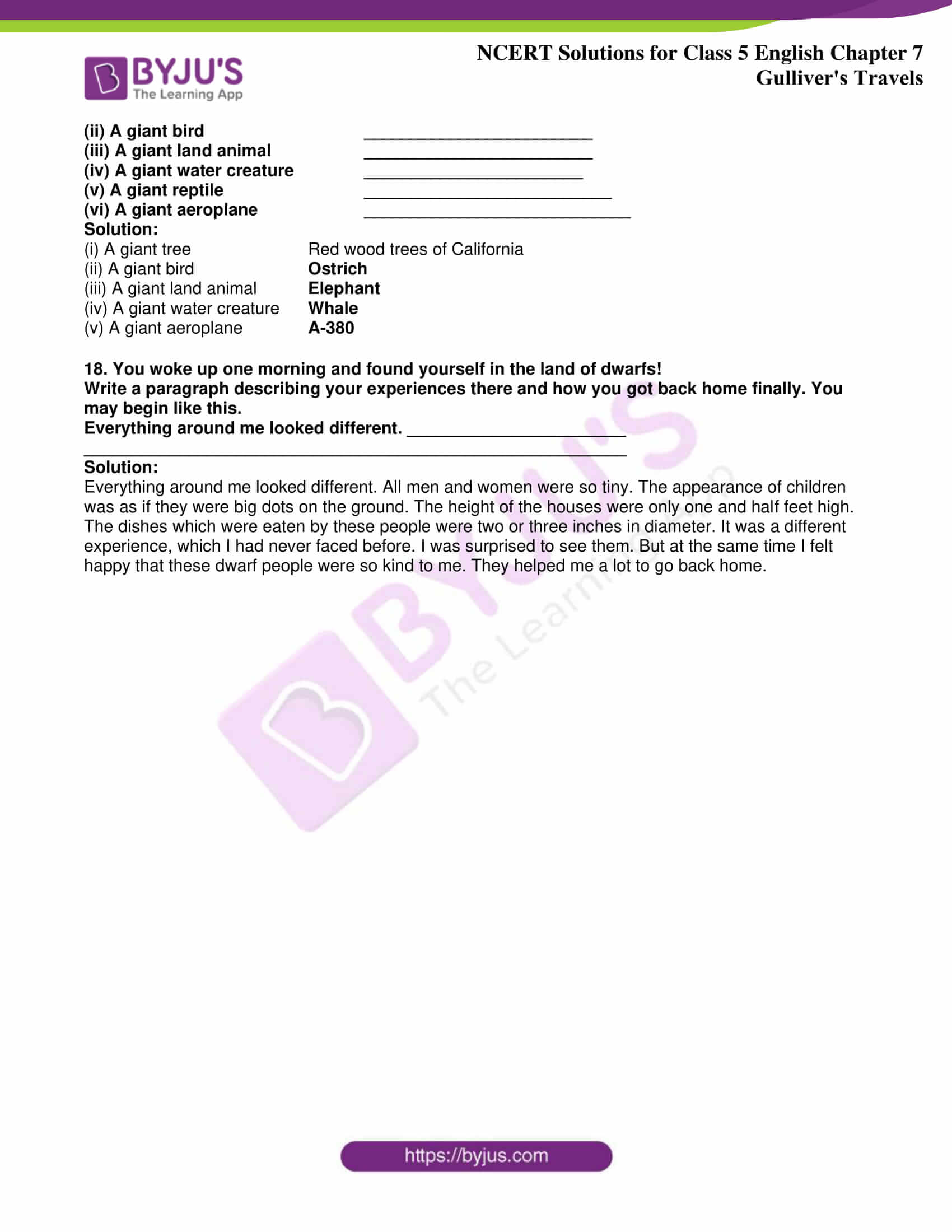 1. When do children go to school in Topsy-turvy Land?

The children go to school at night in Topsy-turvy land.

2. In the poem, if buses travel on the sea, then where do the boats travel? How should it rightly be?

The boats travel to the streets of Topsy-turvy Land. They should travel on the sea.

3. The Topsy Turvy land is very different from our land. Let’s draw a comparison by filling in sentences wherever needed.

4. The words in the sentences are jumbled here. Rearrange them to make meaningful sentences. Words that begin with a capital letter are the first word of the sentence.

(i) Renu naughty is a girl.

(ii) untidy room Her always is.

(iii) mother Her advises her clean to it.

(iv) never listens She her mother to.

(i) Renu is a naughty girl.

(ii) Her room is always untidy.

(iii) Her mother advises her to clean it.

(iv) She never listens to her mother.

5. 1. Write five things that you do at home to make your home look neat and clean.

(i) I sweep the floor twice a day.

(iii) I arrange the things in their suitable places to make the room tidy.

(iv) I clean the utensils in the kitchen immediately.

(v) I vacuum the entire house regularly to get rid of dust.

6. Two stories got mixed up. Sort them out and write them in the appropriate boxes.

Who Did the Lion Eat? 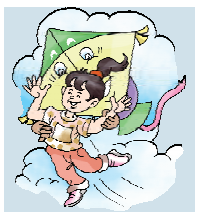 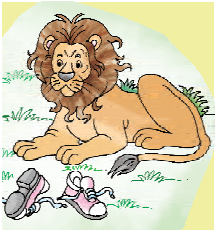 Puran was flying the brand new kite in the park. Suddenly the kite lifted him off the ground and took him over the treetops. Puran was frightened and excited. Finally the kite brought him back to the park.

Who Did the Lion Eat?

Our class had gone to the zoo. We saw a shoe in the lion’s cage. We thought the lion had eaten someone. Some children stood and screamed, and some ran to the Director of the zoo. The lion had not eaten anyone because the shoe was one of the lion’s toys.

1. Why did the captain send the men to the land?

The captain sent the men to the land with vessels to look for water.

2. Why did the men rush back to the ship?

The men were chased by a giant. Hence, they rushed back to the ship.

(i) The giant carried a reaping hook because

(a) he was fighting with the other giants.

(b) he was going to reap the corn.

(c) he wanted to frighten Gulliver.

(a) they had never seen a human before.

(b) they thought he was a doll.

(c) they had never seen such a tiny man.

4. Name the creature to whom you would look like Gulliver.

The creature is now extinct.

The name of the creature is Dinosaur.

5.  From the text, write the sentence that tells you the following.

(ii) Gulliver was a learned man.

(iii) The farmer’s son thought Gulliver was a toy.

(iv) The farmer’s wife was a kind-hearted woman.

(i) They all sat on the ground to take a good look at me.

(ii) I tried to speak to them loudly in several languages.

(iii) On seeing me the child grabbed me from the table and put my head into his mouth.

(iv) Later she put me on her own bed and covered me with a clean white handkerchief.

The giant farmer’s voice was as loud as a bellowing trumpet.

The giant farmer’s voice was as loud as thunder. When something is very cold, we say it is as cold as ice. This is because ice is very very cold.

Now complete the following. Use the words given in the box. 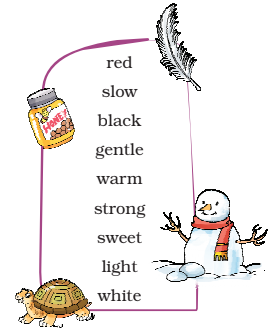 as light as a feather

as slow as a tortoise

as sweet as honey

as white as snow

as strong as an ox

as dark as night

as red as a rose

as warm as a toast

as gentle as a breeze

7. Use the above expressions to complete the following sentences.

(ii) His feet were as cold as ice.

(iii) The newspaper boy was as slow as a tortoise in delivering the papers.

(iv) I felt as light as a feather after exercising

8. Create your own comparisons for the following. Work in pairs

as tall as the Qutub Minar

as fast as a Cheetah

as high as the Mount Everest

as angry as a bull

as tiny as an ant

as brave as a soldier

9. Now look at the pictures and discuss in groups why the following events happened. You may find more than one reason for each of them. 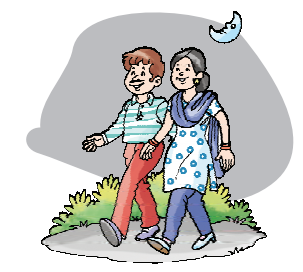 1. One of the leading actors met with an accident. Hence, the play got cancelled.

2. The Principal of the school had got a severe heart attack. Therefore, the play got cancelled.

1. They are walking because the destination place was nearby to them.

2. Walking in the moonlit night after dinner is good for their health. Hence, they are walking.

10. Match the following and write complete sentences in the lines below.

(iii) *When I met Arun, he was looking for his dog.

*Please note that sometimes the order of the sentences changes.

(i) I was writing a letter when my pen ran out.

(ii) Paul was looking out of the window when he noticed a lovely butterfly.

(iii) When I met Arun, he was looking for his dog.

(iv) I was just completing the last answer when ma’am said, “Stop writing”.

(v) The man was painting the wall when he fell off the ladder.

(vi) Amit was doing his homework when the lights went out.

(vii) When the bell rang, my mother was cooking dinner.

(i) I was sitting in a taxi yesterday when I saw an old gentleman calling me.

(ii) He was cleaning out his cupboard when he came across old photographs in his dairy.

(iii) I was walking fast when a dog ran out onto the road.

(iv) Students were gossiping loudly when the teacher walked into the room.

12. Now complete the following in the same way using the words easy or strong.

(i) Skipping is easy.

Jumping is easier than skipping.

Walking is the easiest of all.

The horse is stronger than the dog.

The elephant is the strongest of them all.

13. Now complete the following in the same way using the words juicy or exciting . The order may vary according to your choice.

orange is juicier than apple.

sugarcane is the juiciest of them all.

river rafting is the most exciting of them all.

14. Correct the use of the describing words in the following sentences.

(i) This is the simpler problem of them all .

(ii) Which is the lightest of the two parcels?

(iii) He is cleverer than I am.

(iv) I like this the best of the two.

(v) The flood became badder as the rain increased.

(i) This is the simplest problem of them all.

(ii) Which is the lighter of the two parcels?

(iii) He is cleverer than me.

(iv) I like this the better of the two.

(v) The flood became worse as the rain increased.

I am sending you a photograph of my newest pet. Frisky is a bulldog and a very playful puppy. By next summer he should be old enough to go with us on our long walks. I’m sure you’re looking forward to seeing him. I know you’ll like him.

(vi) oh no the bus has gone

(i) Next Wednesday my sister, Mita is going to join the State Bank of India.

(iii) When I went fishing I caught an old shoe, a plastic bag and a bad cold.

(iv) She fed the baby, washed the dishes, put the lights off and went to sleep.

(i) A giant tree Red wood trees of California

(i) A giant tree Red wood trees of California

18. You woke up one morning and found yourself in the land of dwarfs!

Write a paragraph describing your experiences there and how you got back home finally. You may begin like this.

Everything around me looked different. All men and women were so tiny. The appearance of children was as if they were big dots on the ground. The height of the houses were only one and half feet high. The dishes which were eaten by these people were two or three inches in diameter. It was a different experience, which I had never faced before. I was surprised to see them. But at the same time I felt happy that these dwarf people were so kind to me. They helped me a lot to go back home.

This poem tells us about the Topsy-turvy Land where people walk upon their heads, wear hats on their feet, children go to school by night, buses travel on the sea and people pay for what they don’t get. In order to give the most standard solutions to students, our teachers who hold vast experience have prepared the solutions in a precise manner. These solutions help students to obtain an idea of framing the answers effectively to secure high marks when they appear for their examinations.

This chapter is the story of Gulliver, a sailor who was caught in the land of Giants. He described his experience when a farmer took him to his house and placed him on a dining table which was thirty feet high from the ground. The farmer’s son grabbed him to eat. He shouted so loudly that the farmer’s son dropped him down. Gulliver would have broken his neck, if the farmer’s wife would not have held her apron under him. Students can make use of the solutions formulated by the teachers of high experience to grasp the concepts in-depth. These solutions help students to obtain an in-depth knowledge of key concepts covered in the chapter.

What are the advantages of NCERT Solutions in CBSE Examinations?

The solutions are provided in a systematic manner to help students ace the exams. Students can access the NCERT Solutions in a PDF format for better understanding of the concepts while solving textbook questions. The detailed answers to all the questions makes learning an easy process among the students. Students learn to frame the answers in a creative way by practising NCERT Solutions on a daily basis.

How do people walk in the Topsy-turvy Land in Chapter 7 of NCERT Solutions for Class 5 English?

According to the poet, people walk upon their heads in Topsy-turvy Land. The precise answers prepared by our experts improve grammatical skills among the students. Regular practice of NCERT Solutions enables students to answer the questions more effectively in exams. Following these solutions not only clear doubts immediately but also enhance skills, which are required for better performance among students.

How do you come to know that the farmer’s wife was kind towards Gulliver in Chapter 7 of NCERT Solutions for Class 5 English?

The farmer’s son grabbed Gulliver from the table to eat. He shouted so loudly that the farmer’s son dropped him down on the ground. Then the child’s mother put her apron under Gulliver and put him on her bed by covering him with a clean white handkerchief. The accurate answers by our experts improve logical and analytical skills, which are essential for securing high marks in the exams. Diligent practice of these solutions help students to analyse the type of important questions which would appear in the board exams.