NCERT Solutions for Class 6 English Unit 10 – The Banyan Tree can be downloaded easily at BYJU’S. Our solutions cater to the needs of Class 6 students as they prepare for the English paper and refer these to score well in the exams. The NCERT Solutions of Class 6 English have been designed by our expert teachers to provide the most accurate solutions for Class 6 students.

The story, “The Banyan Tree” mentions a young boy, who views the classic fight between the cobra and the mongoose while he was sitting in an old banyan tree during his stay at his grandfather’s house. To learn more about the story, NCERT Solutions can be referred by the students. 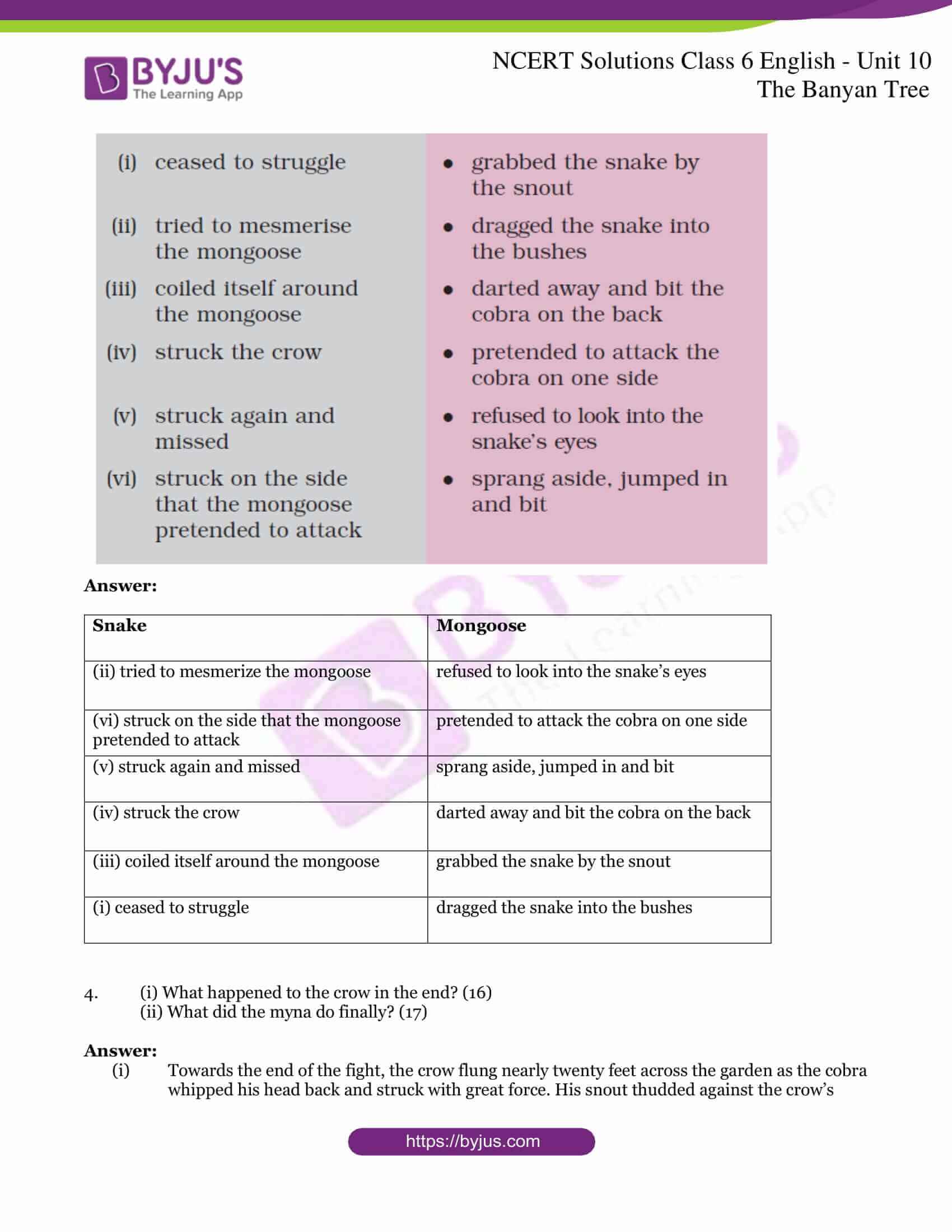 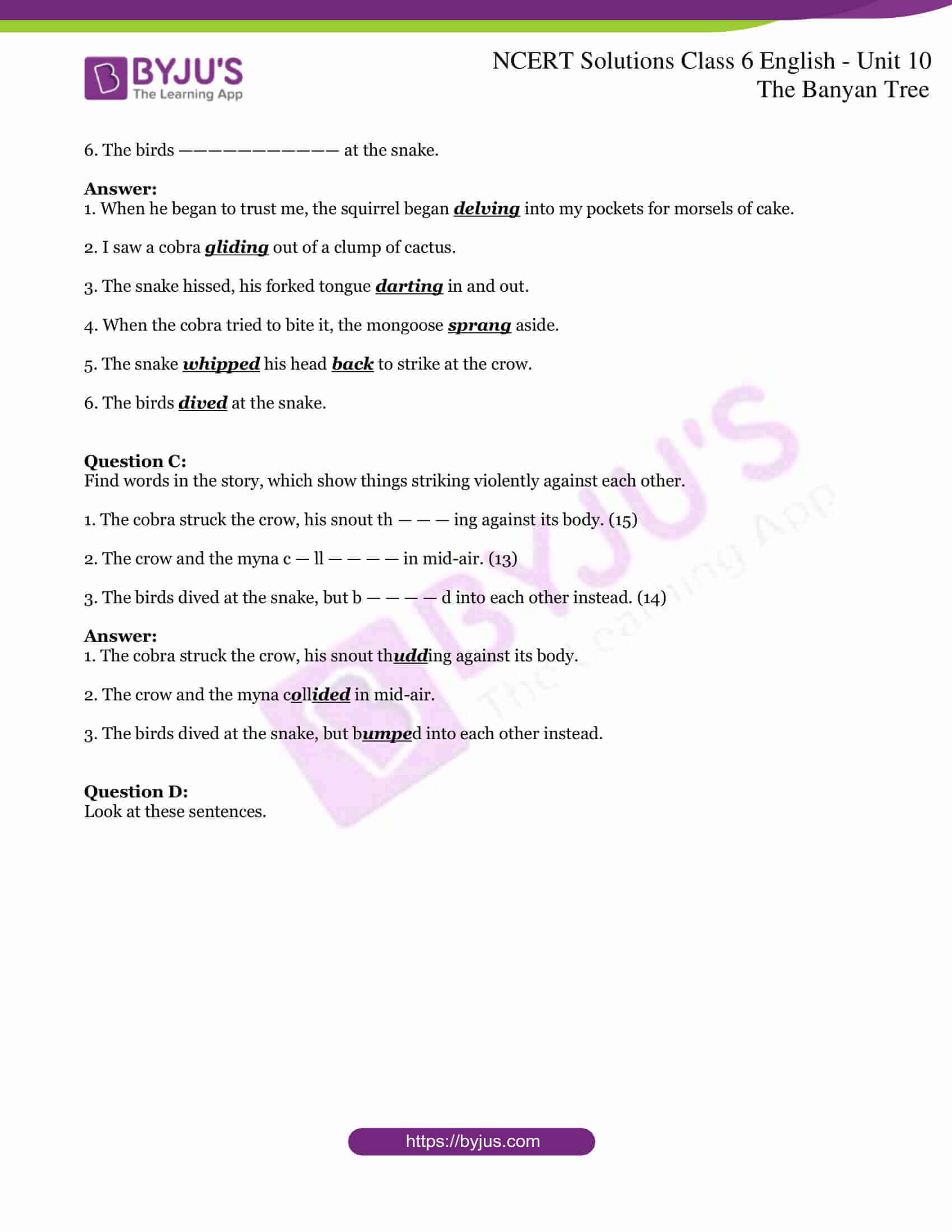 1. The old banyan tree “did not belong” to grandfather, but only to the boy, because

1. The old banyan tree “did not belong” to grandfather, but only to the boy, because his grandfather was sixty-five years old, who could no longer climb it.

2. The small gray squirrel became friendly when he found that the boy did not arm himself with catapult or air gun.

3. When the boy started to bring him pieces of cake and biscuit, the squirrel grew quite bold and was soon taking morsels from his hand.

4. In the spring, the banyan tree was full of small red figs, and birds of all kinds would come there.

5. The banyan tree served the boy as a library where he had made a crude platform to sit and read books.

6. The young boy spent his afternoons in the tree when it was not too hot, leaning against it and reading story books.

(i) What qualities did the two champions have? Pick out words and phrases from the paragraph above this line in the text and write them down.

(ii) What did the cobra and the mongoose do, to show their readiness for the fight?

(ii) To show the readiness for their fight, the cobra hissed defiance with his forked tongue darting in and out, he raised three of his six feet off the ground and spread his broad, spectacled hood. On the other hand, the mongoose bushed his tail and the long hair on his spine stood up.

The other two spectators were a myna and a jungle crow. They settled on the cactus to watch the outcome. They were not content only to watch the fight, they took part in the proceedings and hurled themselves at the cobra.

3. Read the descriptions below of what the snake did and what the mongoose did. Arrange their actions in the proper order. (11, 16) 1. The word ‘round’ usually means a kind of shape. What is its meaning in the story?

The word ‘round’ in the story denotes the different courses of the fight that took place between the snake and the mongoose.

2. Find five words in the following paragraph, which are generally associated with trees. But here, they have been used differently. Underline the words.

Hari leaves for work at nine every morning. He works in the local branch of the firm of which his uncle is the owner. Hari’s success is really the fruit of his own labour. He is happy, but he has a small problem. The root cause of his problem is a stray dog near his office. The dog welcomes Hari with a loud bark every day.

Hari leaves for work at nine every morning. He works in the local branch of the firm of which his uncle is the owner. Hari’s success is really the fruit of his own labour. He is happy, but he has a small problem. The root cause of his problem is a stray dog near his office. The dog welcomes Hari with a loud bark every day.

The words in the box are all words that describe movement. Use them to fill in the blanks in the sentences below.

1. When he began to trust me, the squirrel began delving into my pockets for morsels of cake.

2. I saw a cobra gliding out of a clump of cactus.

3. The snake hissed, his forked tongue darting in and out.

4. When the cobra tried to bite it, the mongoose sprang aside.

5. The snake whipped his head back to strike at the crow.

6. The birds dived at the snake.

Find words in the story, which show things striking violently against each other.

1. The cobra struck the crow, his snout thudding against its body.

2. The crow and the myna collided in mid-air.

3. The birds dived at the snake, but bumped into each other instead.

Look at these sentences. Choose would and could to replace the italicised words in the following sentences.

Grandfather says, in the old days,

1. elephants were able to fly in the sky, like clouds. They were also able to change their shapes. They used to fly behind clouds and frighten them. People used to look up at the sky in wonder.

3. like the owl, he was able to see quite well in the dark. He was able to tell who was coming by listening to their footsteps.

1. elephants could fly in the sky, like clouds. They could also change their shapes. They would fly behind clouds and frighten them. People would look up at the sky in wonder.

3. like the owl, he could see quite well in the dark. He could tell who was coming by listening to their footsteps.

Look at these sentences.

How old was the tree? Can you guess?

Suppose Dehra Dun is 300 years old. How old is the tree?

When two things are the same in some way, we use as…as.

Here is another set of examples.

Use the words in the box to speak about the people and the things below, using as…as or -er than

(Notice that in the word ‘hot’, the letter ‘t’ is doubled when -er is added.) 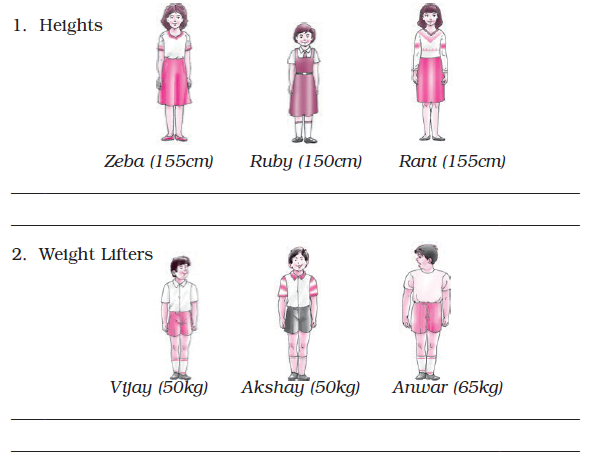 (ii) Zeba is taller than Ruby.

(iii) Rani is taller than Ruby.

(iv) Ruby is shorter than Rani as well as Zeba.

(ii) Anwar is stronger than Akshay as well as Vijay.

(iii) Neither Akshay nor Vijay is as strong as Anwar.

(ii) Srinagar is colder than Shimla and Gangtok.

(iii) Neither Gangtok nor Shimla is as cold as Srinagar.

(iii) Neither Romi’s pencil or Raja’s pencil is as long as Mona’s pencil.

(ii) Chennai is not as hot as Delhi or Nagpur.

(iii) Delhi is hotter than Chennai.

(iv) Nagpur is hotter than Chennai.

Read again the paragraphs of the story in which the author describes the banyan tree, and what he used to do there. Is there a place in your house, or in your grandparents’ or uncles’ or aunts’ houses, that you specially like? Write a short paragraph about it, saying

• what you do there

You may instead write about a place you dislike, or are afraid of.

My favourite place in my house is the balcony that is attached to my bedroom. There is a huge window in my room that overlooks the garden outside. I usually stand in the balcony and enjoy the beautiful view of the garden. Every morning sunshine peeps through my window and lightens up my room. Sometimes, a cool breeze blows inside my room making it airy. I have a desk next to my window and I sit and do my homework and lessons there. I simply love my room, from where I can enjoy the beauty of nature every single day.

(Note: For the second part of the question, students can write about their personal experience).

Why should I refer to the NCERT Solutions for Class 6 English Chapter 10?

1. The NCERT Solutions are created by considering the chapterwise marks distribution as per the CBSE blueprint.
2. Elaborated solutions enable students to understand the concepts efficiently.
3. Step by step explanations are provided for the numericals present in this chapter.
4. Simplified and logical language is used in order to boost the confidence among students.

Does the NCERT Solutions for Class 6 English Chapter 10 follow the CBSE guidelines?

The NCERT Solutions for Class 6 English Chapter 10 prepared by the faculty at BYJU’S strictly adheres to the CBSE guidelines. Each and every solution is created with utmost care with the aim of helping students to perform well in the board exam. By using the NCERT Solutions, students will be able to grasp the chapter and clarify the doubts instantly. The interactive explanation provided for each answer enables problem solving skills among students, which are necessary to score well in the Class 6 exam.

How are NCERT Solutions for Class 6 English Chapter 10 helpful for CBSE Board Exams?

NCERT Solutions for Class 6 English Chapter 10 provides a large number of questions to exercise regularly. This makes it easier to attempt all the questions in exams on time. The short answer type of questions and multiple-choice questions keep them busy solving problems throughout their whole academic year.