According to the story of the chapter ‘How the Dog Found Himself a New Master!’, dogs were not tamed animals in the beginning. They were once free and masters of their own will. What was it that changed dogs from wild to tamed animals? Read this interesting story and find out. For solutions to the questions given in the chapter, follow the link below.

You can also download these NCERT Solutions for Class 6 English in PDF format, through the link provided below and enjoy learning anywhere, anytime!

Download PDF of NCERT Solutions for Class 6 English Unit 2 How the Dog Found Himself a New Master! 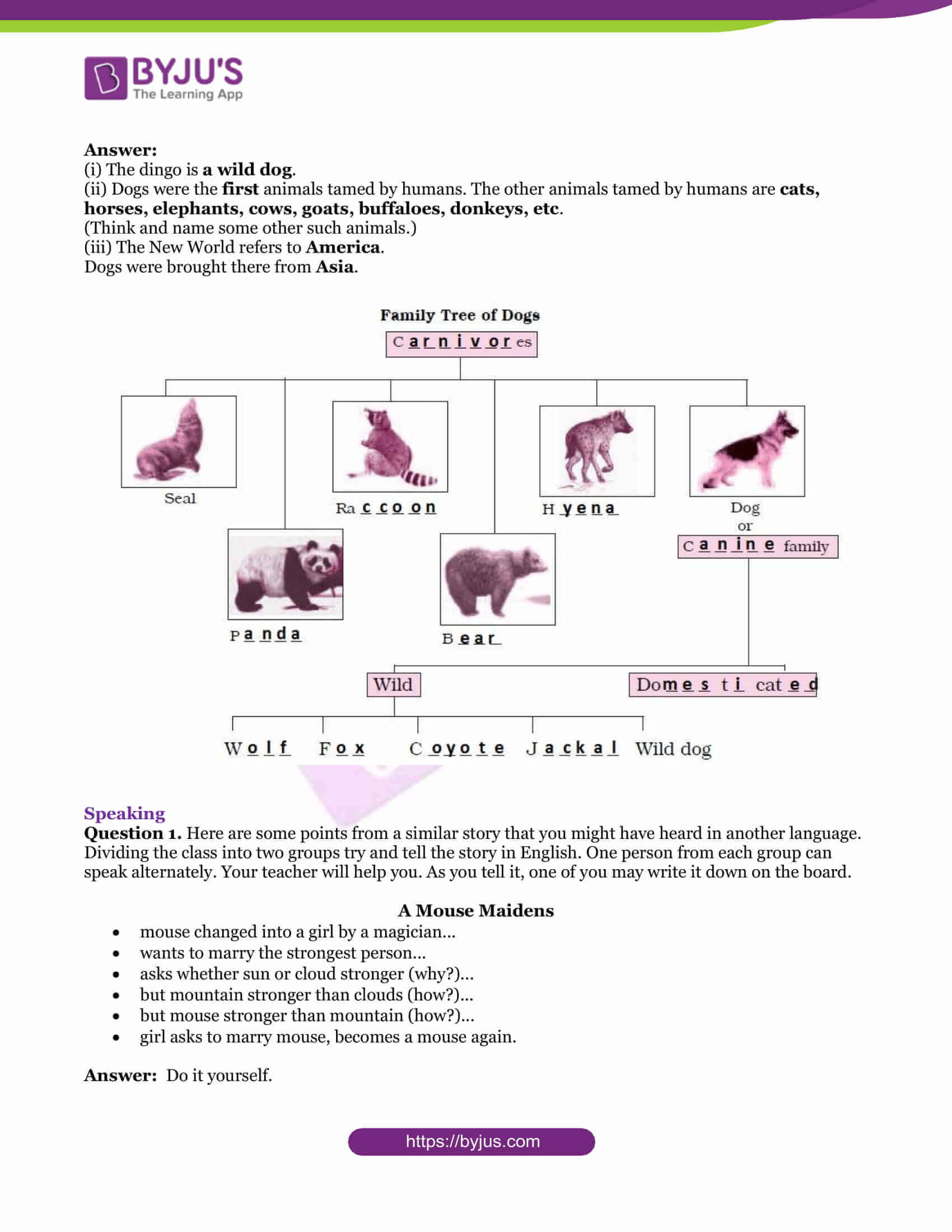 Access Answers to NCERT Solutions for Class 6 English Unit 2 How the Dog Found Himself a New Master!

HOW THE DOG FOUND HIMSELF A NEW MASTER!

How the Dog Found Himself a New Master!

A. Discuss these questions in pairs before you write the answers.

Answer: The dog felt a need for a master because he was tired of wandering about all by himself and being scared of those who were stronger than him. So, he decided to have a master who was stronger than anyone on the entire earth.

Question 2. Who did he first choose as his master? Why did he leave that master? (3)

Answer: He chose the bear as his master.

Answer: He served the lion for a long time because he had no complaints. He was safe as the lion was the strongest beast and no one dared to touch the dog.

Answer: He finally chose man as his master. This is because even the lion, who was the fiercest beast, was scared of humans. This convinced the dog that man was the strongest of all.

B. A summary of the story is given below. Fill in the blanks to complete it taking appropriate phrases from the box.

a dog, stronger than anyone else, the strongest of all, a wolf, the bear, afraid of man, his own master, a lion

Answer: This is the story of a dog, who used to be his own master. He decided to find a master stronger than anyone else. First he found a wolf, but the wolf was afraid of the bear. The dog thought that the bear was the strongest of all. After some time the dog met a lion, who seemed the strongest.

He stayed with the lion for a long time. One day he realized that the lion was afraid of man. To this day, the dog remains man’s best friend.

A. Each word in the box given below indicates a large number of…

For example, ‘a herd of cows’ refers to many cows.

Complete each of the following phrases with a suitable word from the box.

B. Make nouns from the words given below by adding –ness or –ity. (For some words we need to add just –ty, or –y.)

• There are twelve words hidden in this table.

• Six can be found horizontally and the remaining six vertically.

• All of them are describing words like ‘good’, ‘happy’, etc.

• The first letters of the words are given below: 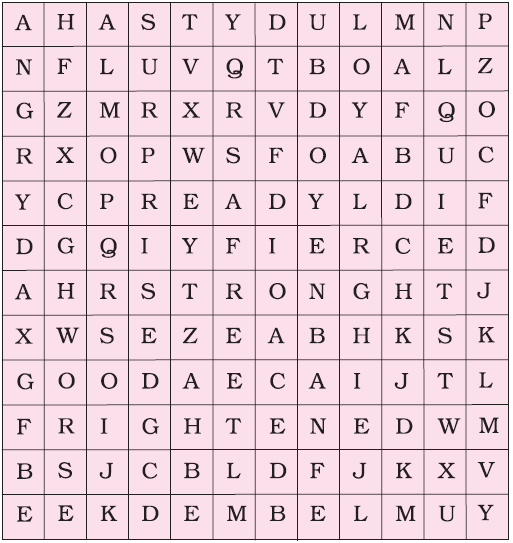 D. Read the following passage and do the exercises that follow. Then complete the family tree of dogs given on the facing page.

The dog family is one of the 11 families that make up the Carnivores, a large group of intelligent, flesh-eating, backboned animals. In this group are such varied animals as bears, pandas, raccoons, cats, hyenas, and even seal. The dog or canine family has many wild\ species like wolves, foxes, coyotes, jackals, and wild dogs.

The dog is the only domesticated member of the canine family though now and then someone tames a wolf, fox or coyote as a pet.

All members of the dog family are descendants of a wolf-like animal which lived about 15 million years ago. From this distant ancestor, the true dogs gradually developed. But nobody knows the exact ancestor of the modern domestic dog.

Several wild dogs look and behave like domestic dogs. The dingo or wild dog of Australia is one of these. It is possible that the dingo was a tamed dog brought to Australia long ago which then ran wild.

Dogs were the first animals tamed by humans — perhaps 20,000 years ago. Tamed dogs were brought from Asia to the New World 5,000 or more years ago. Dogs were first used for hunting.

1. Find the opposites of these words in the text above.

(Think and name some other such animals.) (Think and name some other such animals.)

Dogs were brought there from Asia. Question 1. Here are some points from a similar story that you might have heard in another language. Dividing the class into two groups try and tell the story in English. One person from each group can speak alternately. Your teacher will help you. As you tell it, one of you may write it down on the board.