Looking out for reliable NCERT Solutions for Class 6 English Unit 4 An Indian – American Woman in Space: Kalpana Chawla? Here we are with answers to all the questions of the English textbook Honeysuckle. These NCERT Solutions for Class 6 will help students in their preparation for the examination. These have been crafted by our subject-matter experts, as per the CBSE standards.

A girl born in Karnal, Haryana was the first Indian-origin American woman who made her way to space. We are talking about none other than Kalpana Chawla. Read this chapter to know about her challenging journey and how she made it all possible. Also, learn about Columbia and what went wrong that it crashed and Kalpana could never come back. Students can access NCERT Solutions to learn more about the unit.

You can download these NCERT Solutions for Class 6 English in PDF format through the link provided below and enjoy learning anywhere, anytime! 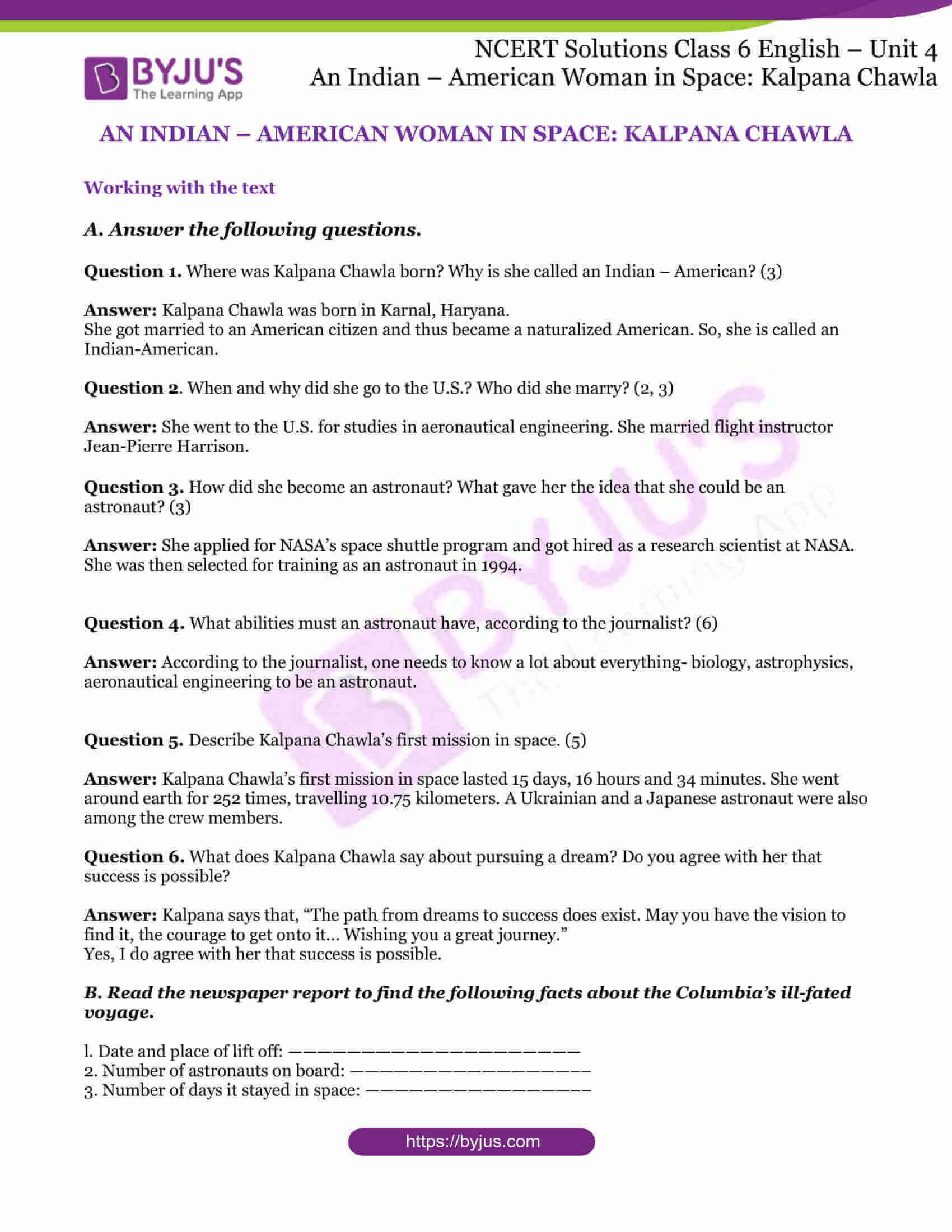 A. Answer the following questions.

Question 1. Where was Kalpana Chawla born? Why is she called an Indian – American? (3)

She got married to an American citizen and thus became a naturalized American. So, she is called an Indian-American.

Answer: She went to the U.S. for studies in aeronautical engineering. She married flight instructor Jean-Pierre Harrison.

Answer: She applied for NASA’s space shuttle program and got hired as a research scientist at NASA. She was then selected for training as an astronaut in 1994.

Question 4. What abilities must an astronaut have, according to the journalist? (6)

Answer: According to the journalist, one needs to know a lot about everything- biology, astrophysics, aeronautical engineering to be an astronaut.

Answer: Kalpana Chawla’s first mission in space lasted 15 days, 16 hours and 34 minutes. She went around earth for 252 times, travelling 10.75 kilometers. A Ukrainian and a Japanese astronaut were also among the crew members.

Question 6. What does Kalpana Chawla say about pursuing a dream? Do you agree with her that success is possible?

Answer: Kalpana says that, “The path from dreams to success does exist. May you have the vision to find it, the courage to get onto it… Wishing you a great journey.”

Yes, I do agree with her that with vision and courage, success is possible.

B. Read the newspaper report to find the following facts about the Columbia’s ill-fated voyage.

2. Number of astronauts on board: Seven

4. Number of experiments done by scientists: 80

A. Match the following:

B. Use these phrases in sentences of your own, after finding out their meanings.

4. lifted off: The helicopter made a lot of noise when it lifted off from the helipad.

5. blast off: The airplane blasted off at midnight.

6. went on: The meeting went on the whole evening.

9. carry on: She was convinced to carry on her career in singing.

Add ‘un’– to the words below to make their opposites. Then look up the meanings of the words you have formed in the dictionary.

Question 1. In her message to students of her college, Kalpana Chawla said, “May you have the vision to find the path from dreams to success… Wishing you a great journey.”

Form pairs. Use “May you…” and “I wish you/Wishing you” to wish your partner good luck and success in

(ii) a quiz or a competition, and

(iii) a test or examination.

Be sure to thank your partner when she/he wishes you in turn. You may also look up a telephone directory, or go to a post office, and get a list in English and Hindi of standard phrases that can be sent in greeting telegrams anywhere in India. Discuss which of these you might use, and when. Compare the English and Hindi phrases for expressing good wishes. Do you know such phrases in any other language?

(i) May you win the sports event.

(ii) I wish you perform your best in the quiz competition.

(iii) Wishing you all the best for your examination.

A. Do you have a ‘dream’, or something you very much wish to do?

Write a paragraph saying what you want or wish to do. Then say (in another paragraph) how you think you can make your dream come true.

Answer: My dream is to become a scientist and invent something useful for the society and generations to come.

I think I can make my dream come true by studying strategically. I will have to make and follow a proper time table for the same.

B. Given below are some words that are spelt differently in British and American English. Fill in the blanks accordingly.