The Squirrel is a short poem by Mildred Bowers Armstrong. Although the poem has merely 6 lines, it talks all about a squirrel’s appearance, its basic nature i.e. being playful and active. The poem is quite crisp and self-explanatory.

You can download these NCERT Solutions for Class 7 English in PDF format for free, through the link provided below: 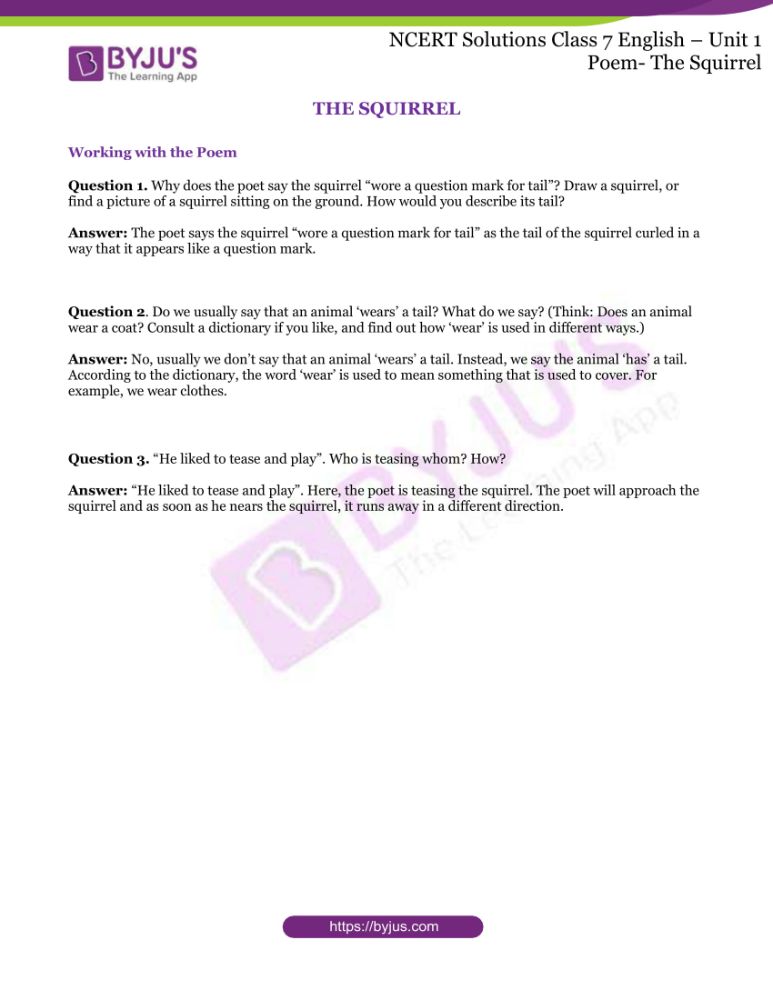 Question 1. Why does the poet say the squirrel “wore a question mark for tail”? Draw a squirrel, or find a picture of a squirrel sitting on the ground. How would you describe its tail?

Question 2. Do we usually say that an animal ‘wears’ a tail? What do we say? (Think: Does an animal wear a coat? Consult a dictionary if you like, and find out how ‘wear’ is used in different ways.)

Answer: No, usually we don’t say that an animal ‘wears’ a tail. Instead, we say the animal ‘has’ a tail.

According to the dictionary, the word ‘wear’ is used to mean something that is used to cover. For example, we wear clothes.

Question 3. “He liked to tease and play”. Who is teasing whom? How?

Answer: “He liked to tease and play”. Here, the poet is teasing the squirrel. The poet will approach the squirrel and as soon as he nears the squirrel, it runs away in a different direction.

Who is the poet of Unit 1 Poem of NCERT Solutions for Class 7 English?

Mildred Bowers Armstrong is the poet of the short poem – The Squirrel. The poem has 6 lines and it talked all about the squirrel’s appearance and its basic nature.

Describe the physical appearance of the squirrel in Unit 1 Poem of NCERT Solutions for Class 7 English.

The squirrel had a slender body, a bushy tail that looked like a question mark and large eyes. Its fur is short, soft and silky. The colour of its fur appeared like it wore an overcoat of grey.

What did the poet notice when one ran around the squirrel’s tree as in Unit 1 Poem of NCERT Solutions for Class 7 English?

When one ran around the squirrel’s tree or if approached, the squirrel tries to escape by running away in other directions.