NCERT Solutions for Class 8 English Unit 2 – The Tsunami is available here at BYJU’S for Class 8 students. Presenting the NCERT Solutions for Class 8 English link below, which is solved by our subject-matter experts, in accordance with the latest CBSE guidelines. This unit has a story “The Tsunami” which talks about how a natural calamity causes disruption and massive loss and destruction to life and property. Besides, it also mentions how some courageous souls come forward to save lives and overcome obstacles, while teaching a lesson of survival and resilience to all.

Class 8 students can check the English textbook NCERT Solutions, which are answered as per the CBSE English curriculum. The download link is given below. Besides, you can also explore the different subjects of NCERT Solutions of Class 8 in PDF format here and watch your child enjoy an interesting learning experience. 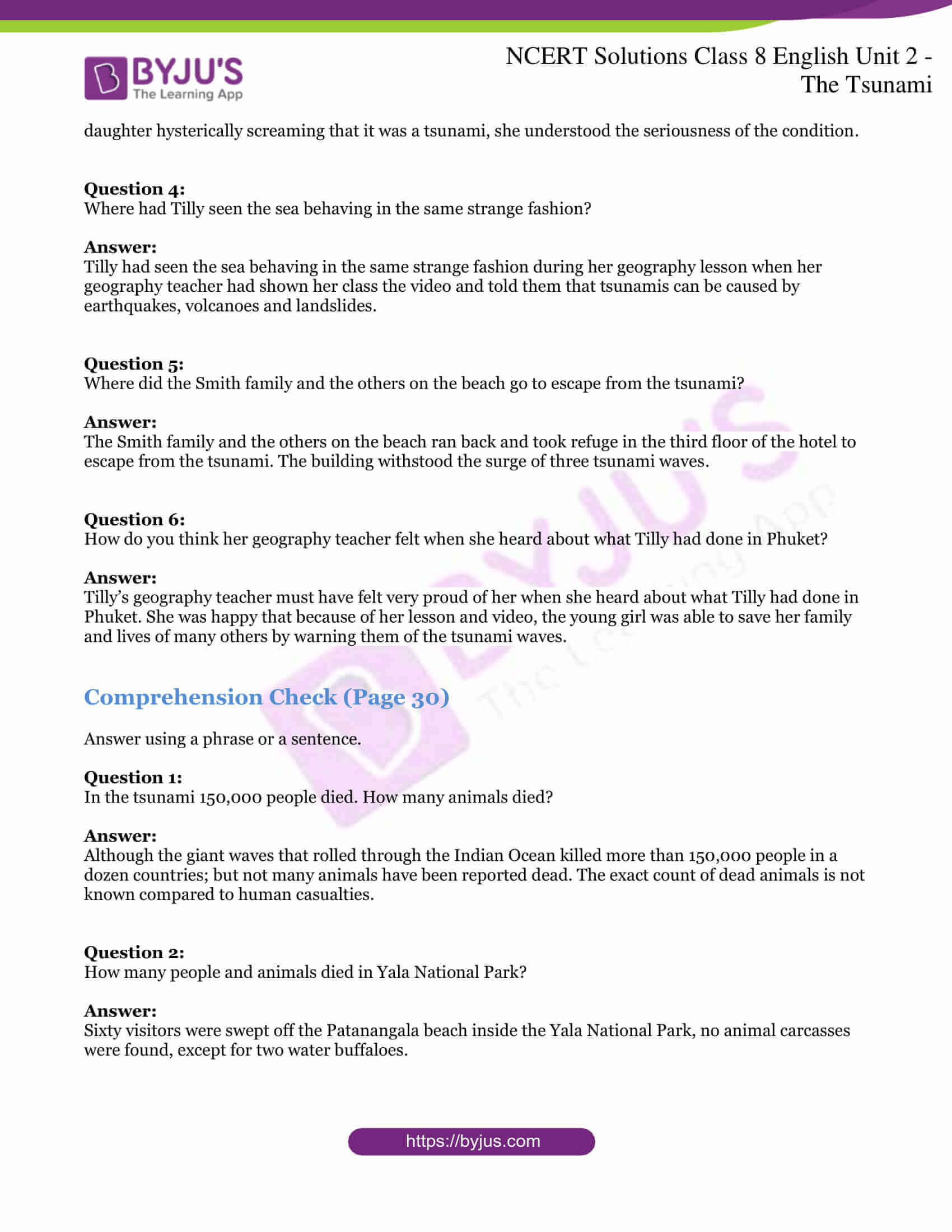 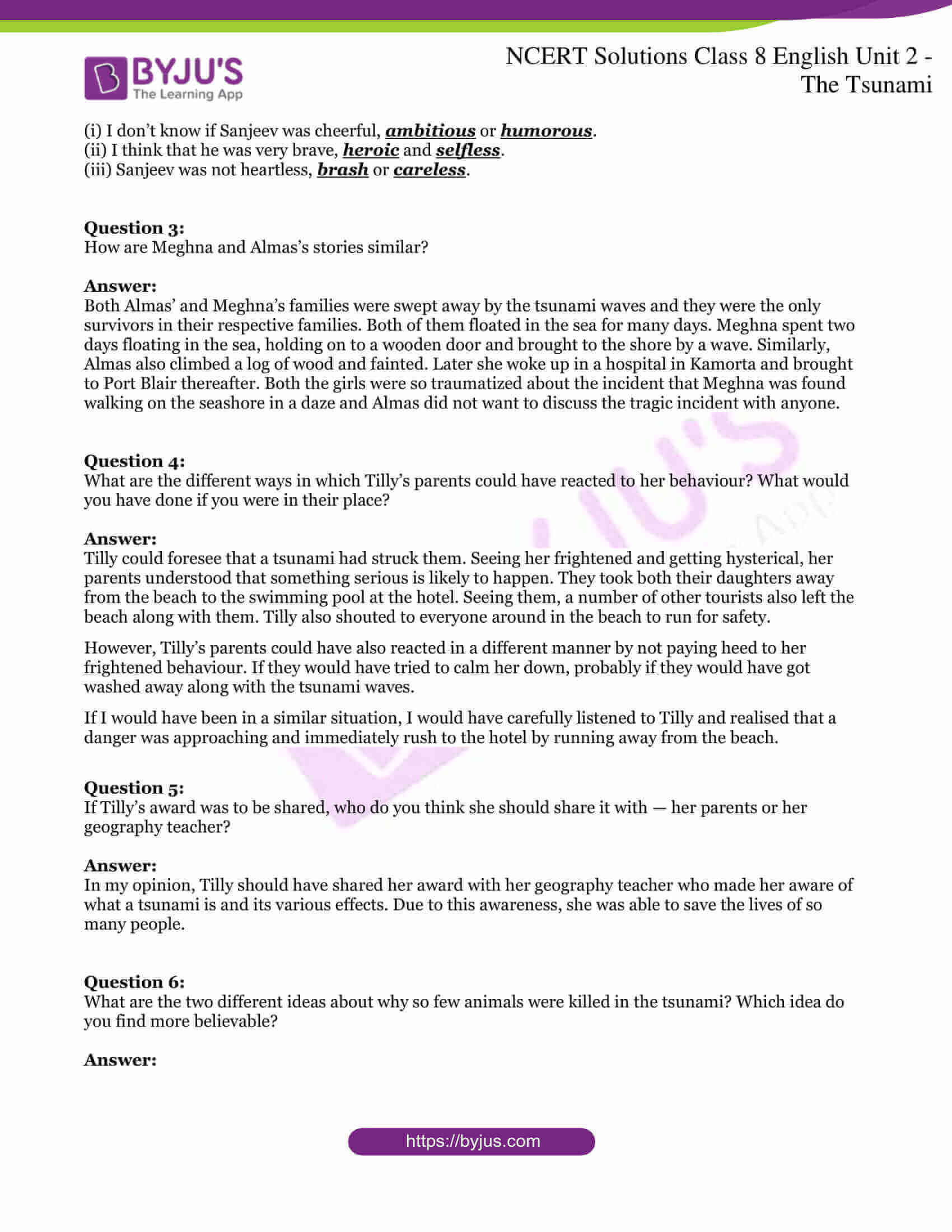 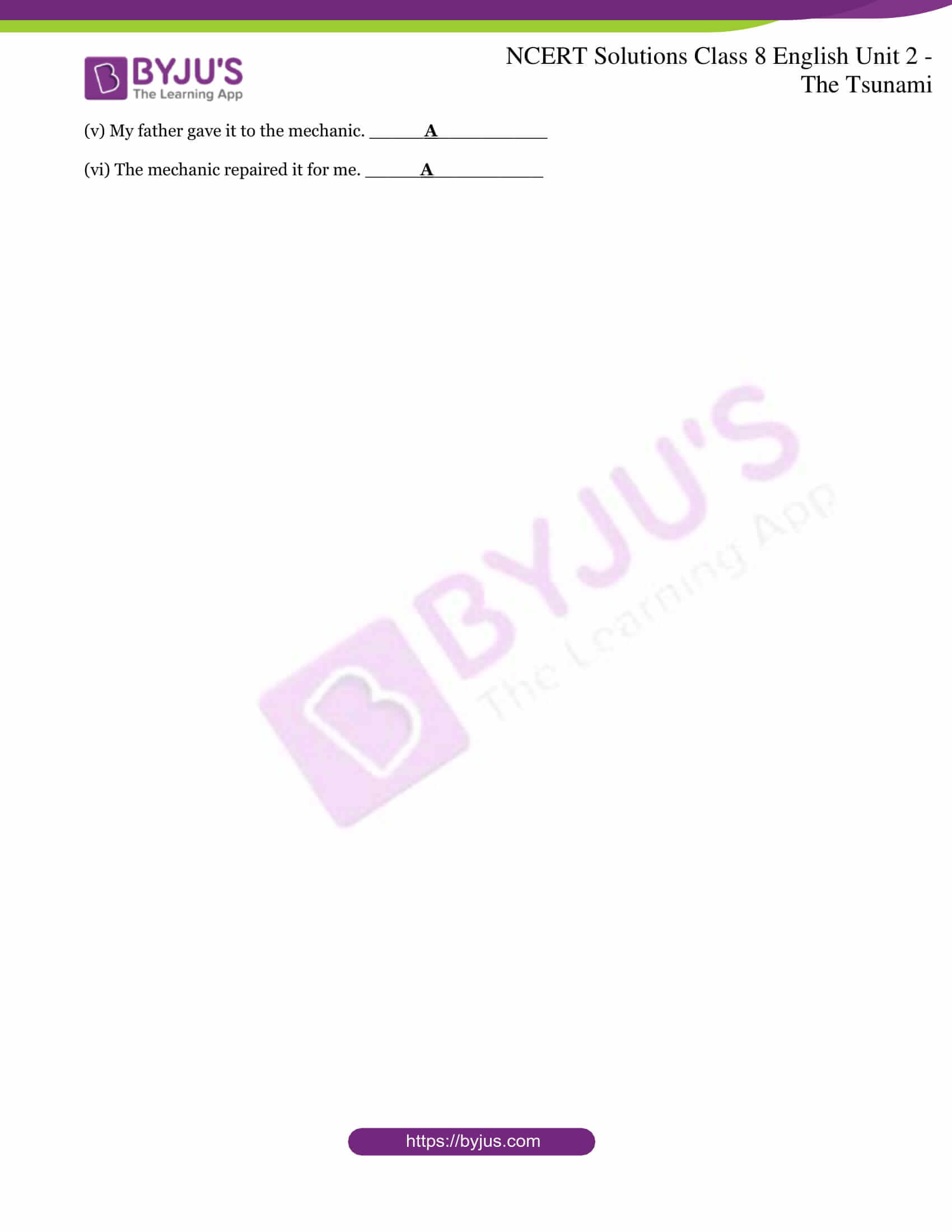 Say whether the following are true or false.

1. Ignesious lost his wife, two children, his father-in-law, and his brother-in-law in the tsunami.

2. Sanjeev made it to safety after the tsunami.

3. Meghna was saved by a relief helicopter.

4. Almas’s father realised that a tsunami was going to hit the island.

5. Her mother and aunts were washed away with the tree that they were holding on to.

Answer the following in a phrase or sentence.

Why did Tilly’s family come to Thailand?

Tilly Smith came with her family from South-East England to celebrate Christmas at a beach resort in southern Thailand.

What were the warning signs that both Tilly and her mother saw?

Tilly and her family had already experienced a massive earthquake off northern Sumatra earlier in the morning of 26 December 2004. Her mother saw that the water was swelling and coming closer and the beach was getting smaller and smaller. Meanwhile, Tilly also noticed that the sea slowly started to rise, foam and bubble and form whirlpools in it.

Do you think Tilly’s mother was alarmed by them?

Tilly’s mother initially didn’t understand what was happening but when she saw her frightened daughter hysterically screaming that it was a tsunami, she understood the seriousness of the condition.

Where had Tilly seen the sea behaving in the same strange fashion?

Tilly had seen the sea behaving in the same strange fashion during her geography lesson when her geography teacher had shown her class the video and told them that tsunamis can be caused by earthquakes, volcanoes and landslides.

Where did the Smith family and the others on the beach go to escape from the tsunami?

The Smith family and the others on the beach ran back and took refuge in the third floor of the hotel to escape from the tsunami. The building withstood the surge of three tsunami waves.

How do you think her geography teacher felt when she heard about what Tilly had done in Phuket?

Tilly’s geography teacher must have felt very proud of her when she heard about what Tilly had done in Phuket. She was happy that because of her lesson and video, the young girl was able to save her family and lives of many others by warning them of the tsunami waves.

Answer using a phrase or a sentence.

Although the giant waves that rolled through the Indian Ocean killed more than 150,000 people in a dozen countries; but not many animals have been reported dead. The exact count of dead animals is not known compared to human casualties.

How many people and animals died in Yala National Park?

Sixty visitors were swept off the Patanangala beach inside the Yala National Park, no animal carcasses were found, except for two water buffaloes.

What do people say about the elephants of Yala National Park?

The people present at the Yala National Park observed three elephants running away from the Patanangala beach about an hour before the tsunami hit that place.

What did the dogs in Galle do?

The dogs in Galle refused to go for their daily run on the beach on the day the tsunami hit the coast.

When he felt the earthquake, do you think Ignesious immediately worried about a tsunami? Give reasons for your answer. Which sentence in the text tells you that the Ignesious family did not have any time to discuss and plan their course of action after the tsunami struck?

No, Ignesious did not realise a tsunami had struck when he felt the earthquake initially. He got up and carefully took his television set off its table and put it down on the ground so that it would not fall and break. Then the family rushed out of the house.

Ignesious family did not have any time to discuss and plan their course of action after the tsunami struck due to chaos and confusion. When the tremors stopped, they saw the sea rising. In the chaos and confusion, two of his children caught hold of the hands of their mother’s father and mother’s brother, and rushed in the opposite direction.

Which words in the list below describe Sanjeev, in your opinion? (Look up the dictionary for words that you are not sure of.)

Use words from the list to complete the three sentences below.

In my opinion, the words that describe Sanjeev are brave, heroic and selfless.

(i) I don’t know if Sanjeev was cheerful, ambitious or humorous.

(ii) I think that he was very brave, heroic and selfless.

(iii) Sanjeev was not heartless, brash or careless.

How are Meghna and Almas’s stories similar?

Both Almas’ and Meghna’s families were swept away by the tsunami waves and they were the only survivors in their respective families. Both of them floated in the sea for many days. Meghna spent two days floating in the sea, holding on to a wooden door and brought to the shore by a wave. Similarly, Almas also climbed a log of wood and fainted. Later she woke up in a hospital in Kamorta and brought to Port Blair thereafter. Both the girls were so traumatized about the incident that Meghna was found walking on the seashore in a daze and Almas did not want to discuss the tragic incident with anyone.

What are the different ways in which Tilly’s parents could have reacted to her behaviour? What would you have done if you were in their place?

Tilly could foresee that a tsunami had struck them. Seeing her frightened and getting hysterical, her parents understood that something serious is likely to happen. They took both their daughters away from the beach to the swimming pool at the hotel. Seeing them, a number of other tourists also left the beach along with them. Tilly also shouted to everyone around in the beach to run for safety.

However, Tilly’s parents could have also reacted in a different manner by not paying heed to her frightened behaviour. If they would have tried to calm her down, probably if they would have got washed away along with the tsunami waves.

If I would have been in a similar situation, I would have carefully listened to Tilly and realised that a danger was approaching and immediately rush to the hotel by running away from the beach.

If Tilly’s award was to be shared, who do you think she should share it with — her parents or her geography teacher?

In my opinion, Tilly should have shared her award with her geography teacher who made her aware of what a tsunami is and its various effects. Due to this awareness, she was able to save the lives of so many people.

What are the two different ideas about why so few animals were killed in the tsunami? Which idea do you find more believable?

Not many animals were killed by the tsunami because most of them have a sixth sense working in them. As a matter of fact, animals know when the earth is going to shake. Some experts also believe that animals have an acute sense of hearing that helps them to hear or feel the earth’s vibration. They have the ability to sense an approaching disaster long before humans realise what’s going on and they are able to move to safer places.

Animals have a better sense of hearing and gut feeling and this is scientifically proven that they can sense disturbances and hear low frequency sounds which is not within the capacity of humans. Although this is an incredible fact, yet it’s true!

Go through Part-I carefully, and make a list of as many words as you can find that indicate movement of different kinds. (There is one word that occurs repeatedly — count how many times!) Put them into three categories.

Can you explain why there are many words in one column and not in the others?

The ‘fast movement’ has more words than the other two columns i.e. ‘slow movement’ and ‘neither slow nor fast’. This indicates that there are fast movements in a tsunami and it is extremely difficult to avert such a critical situation both for men and animals instantly. Although people were fast in their movements such as running or climbing, most of the people got washed away by the tsunami waves.

Fill in the blanks in the sentences below (the verbs given in brackets will give you a clue).

(ii) When the zoo was flooded, there was a lot of _________ and many animals escaped into the countryside. (confuse)

(i) The earth trembled, but not many people felt the trembling.

(ii) When the zoo was flooded, there was a lot of confusion and many animals escaped into the countryside.

(iii) We heard with relief that the lion had been recaptured.

(iv) The zookeeper was stuck in a tree and his rescue was filmed by the TV crew.

(v) There was much excitement in the village when the snake charmer came visiting.

Say whether the following sentences are in the Active or the Passive voice. Write A or P after each sentence as shown in the first sentence.