NCERT Solutions for Class 8 English Unit 3 Poem – Macavity: The Mystery Cat are provided here at BYJU’S for Class 8 students. The NCERT Solutions of Class 8 are solved by our panel of expert teachers, according to the latest CBSE rules. This unit has a poem “Macavity: The Mystery Cat”, which mentions the mysterious qualities of a cat, Macavity who has broken almost every human law. Mysteriously, he escapes from the crime scene every time.

Students can access and download the NCERT Solutions link given below, which have been solved as per the latest CBSE English curriculum. To know more, you can check the NCERT Solutions for Class 8 English here and explore the different chapters with great interest. 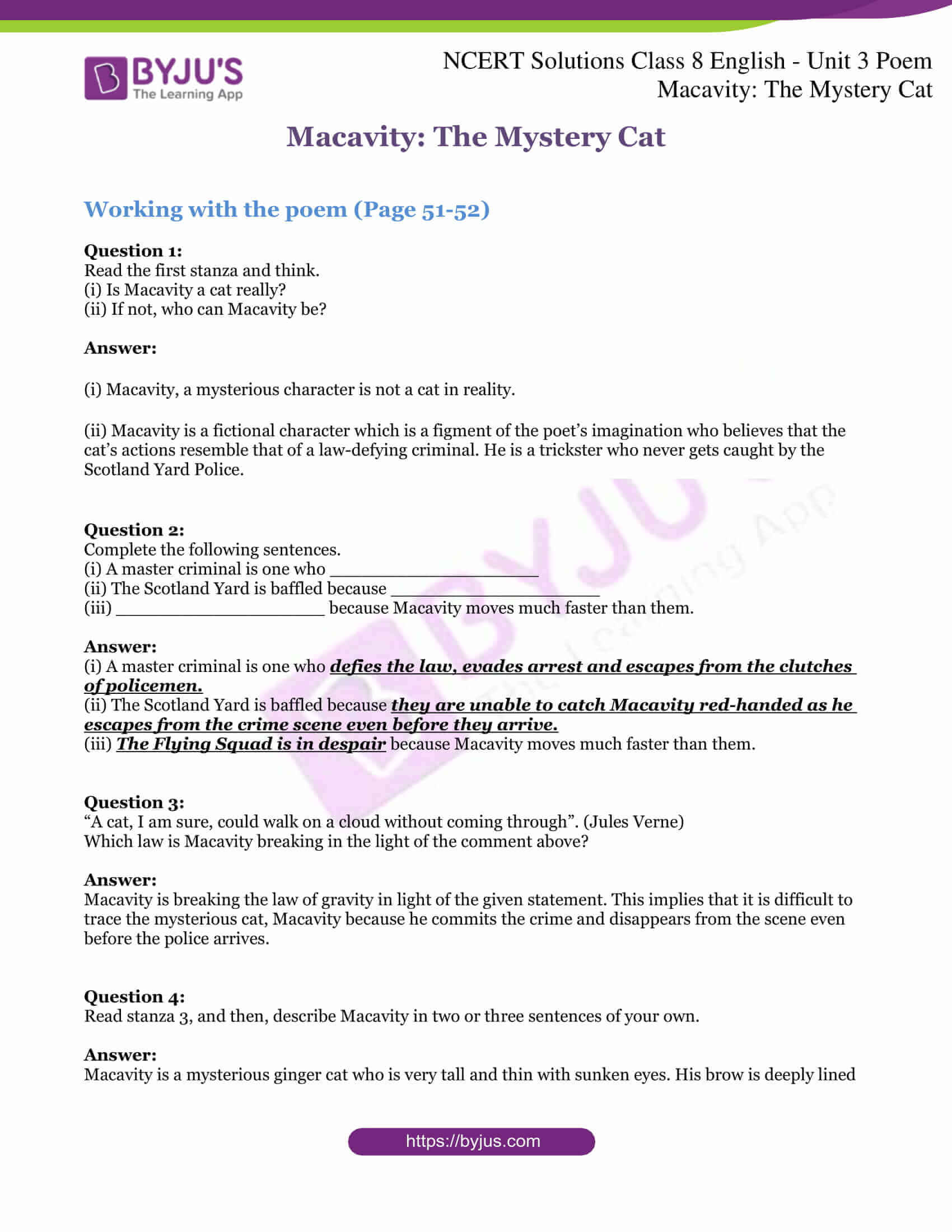 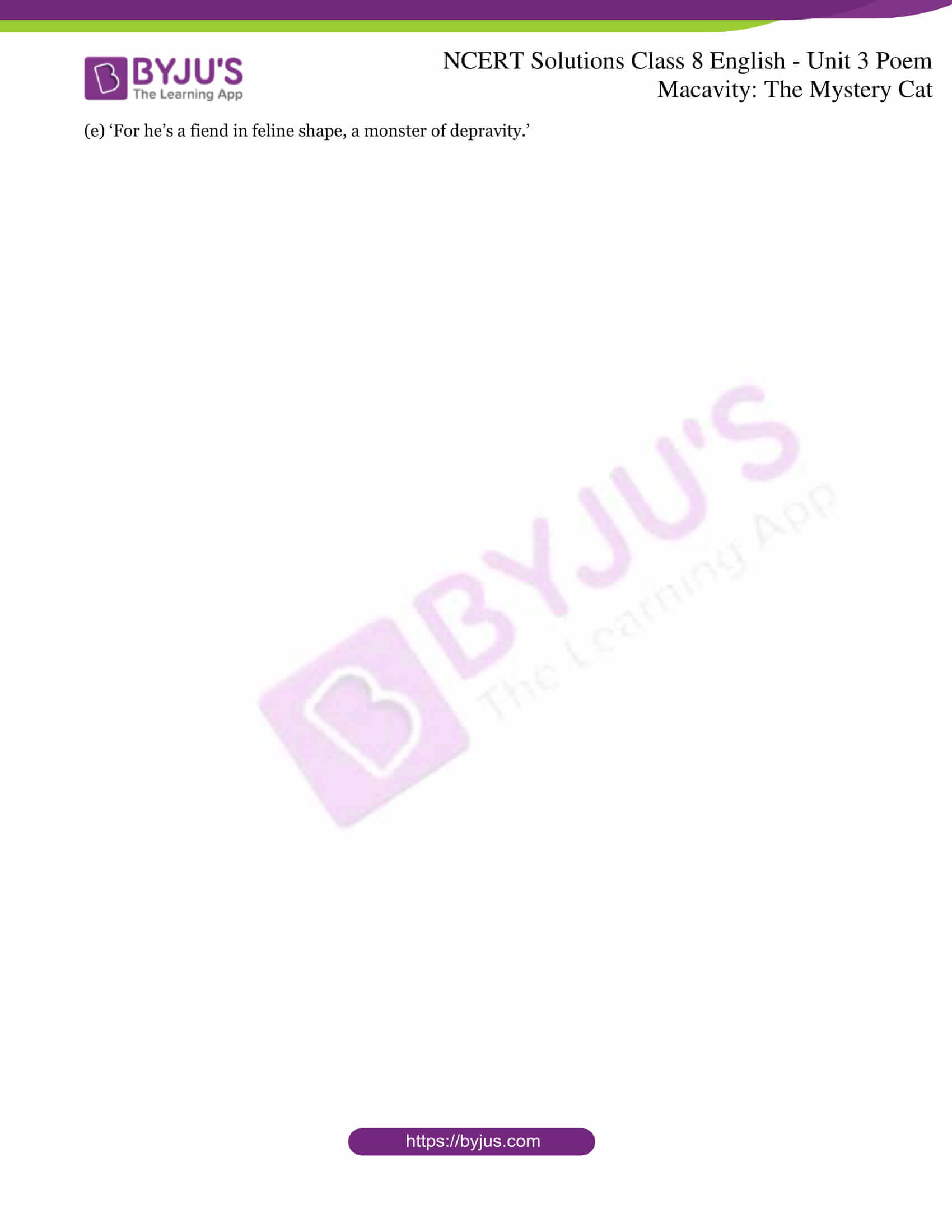 Read the first stanza and think.

(i) Is Macavity a cat really?

“A cat, I am sure, could walk on a cloud without coming through”. (Jules Verne)

Which law is Macavity breaking in the light of the comment above?

Macavity is breaking the law of gravity in light of the given statement. This implies that it is difficult to trace the mysterious cat, Macavity because he commits the crime and disappears from the scene even before the police arrives.

Read stanza 3, and then, describe Macavity in two or three sentences of your own.

Macavity is a mysterious ginger cat who is very tall and thin with sunken eyes. His brow is deeply lined with thought and he has a highly domed head. He has a dusty coat and his whiskers are uncombed due to negligence. He sways his head from side to side and makes snake-like movements. Although others might think that he is half asleep but he is always wide awake.

Say ‘False’ or ‘True’ for each of the following statements.

(i) Macavity is not an ordinary cat.

(ii) Macavity cannot do what a fakir can easily do.

(v) Macavity is a spy, a trickster and a criminal, all rolled in one.

(i) Macavity is not an ordinary cat. -> True

(ii) Macavity cannot do what a fakir can easily do. -> False

(v) Macavity is a spy, a trickster and a criminal, all rolled in one. -> True

Having read the poem, try to guess whether the poet is fond of cats. If so, why does he call Macavity a fiend and monster?

Yes, it seems the poet is very fond of cats and admires Macavity when he defies the law and manages to escape from the clutches of police every time. He calls Macavity a ‘fiend’ and a ‘monster’ as he wants to portray an evil side of the cat. He uses these terms to describe the negative activities of a criminal character who is very quick in movement and evades arrest every time and vanishes in thin air before the police arrives. The mysterious and devil-like eyes might have influenced the poet to create an evil character in the form of a cat, who is corrupt and wicked by nature.

Has the poet used exaggeration for special effect? Find a few examples of it and read those lines aloud.

Yes, the poet has used many exaggerations in the poem, such as Macavity’s defiance of gravitational law and has used terms like ‘a fiend in feline shape and a monster of depravity’ to highlight the mysterious aura surrounding the cat. He often mentions in the poem that the Scotland Yard and the Flying Squad are in utter despair due to their inability to catch the criminal as he escapes the crime scene even before they arrive. All these exaggerations indicate the monstrous and mysterious nature of Macavity, the evil criminal.

A few examples of these exaggerations from the poem are listed below: