This unit has a story “Bepin Choudhury’s Lapse of Memory”, which is a story composed by Satyajit Ray with a surprise ending. This interesting tale brings in its wake an immense psychological relief to a sophisticated executive besieged by a conspiracy, with a humorous flavour in it.

Students of Class 8 can check the English textbook NCERT Solutions, which are solved as per the CBSE English curriculum. The download link is given below. Besides, you can also explore the other important subjects of NCERT Solutions of Class 8 in PDF format here and watch your child enjoy a fruitful learning experience. 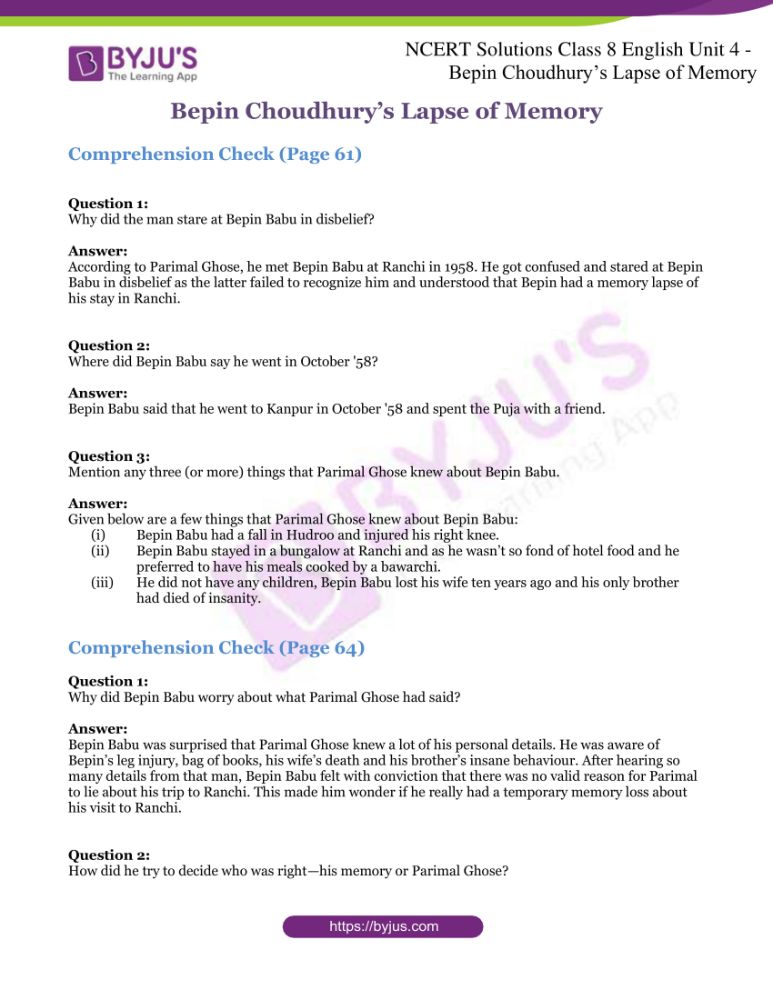 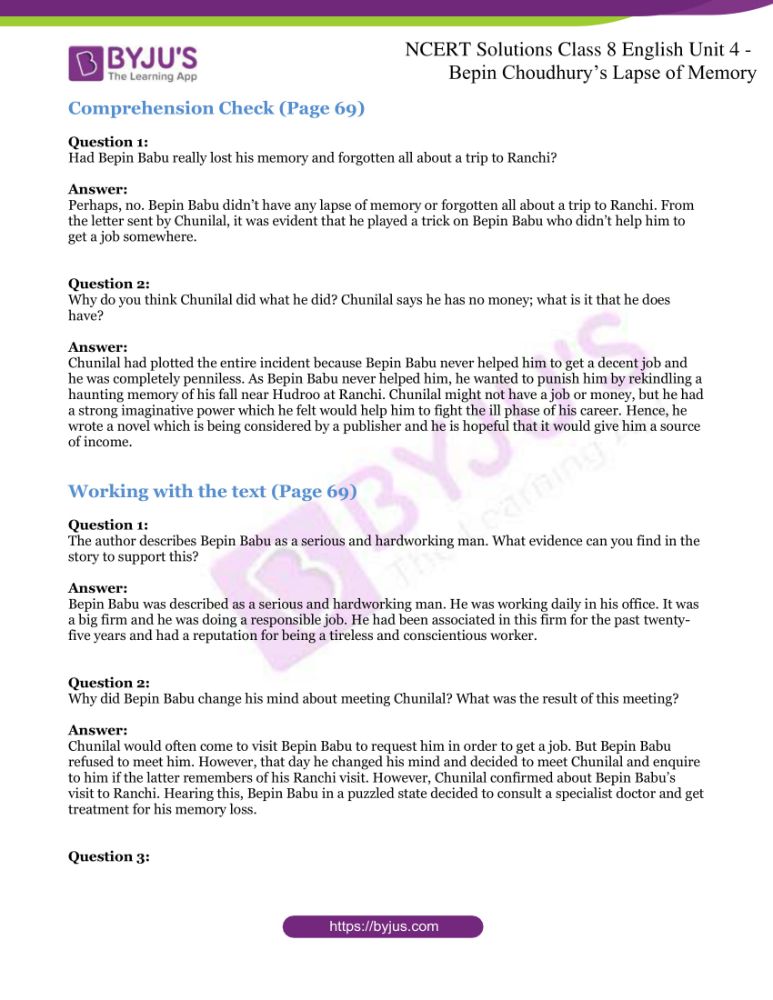 Why did the man stare at Bepin Babu in disbelief?

According to Parimal Ghose, he met Bepin Babu at Ranchi in 1958. He got confused and stared at Bepin Babu in disbelief as the latter failed to recognize him and understood that Bepin had a memory lapse of his stay in Ranchi.

Where did Bepin Babu say he went in October ’58?

Bepin Babu said that he went to Kanpur in October ’58 and spent the Puja with a friend.

Mention any three (or more) things that Parimal Ghose knew about Bepin Babu.

Given below are a few things that Parimal Ghose knew about Bepin Babu:

Why did Bepin Babu worry about what Parimal Ghose had said?

Bepin Babu was surprised that Parimal Ghose knew a lot of his personal details. He was aware of Bepin’s leg injury, bag of books, his wife’s death and his brother’s insane behaviour. After hearing so many details from that man, Bepin Babu felt with conviction that there was no valid reason for Parimal to lie about his trip to Ranchi. This made him wonder if he really had a temporary memory loss about his visit to Ranchi.

How did he try to decide who was right—his memory or Parimal Ghose?

Bepin Babu was really worried after his encounter with Parimal Ghose, who adamantly claimed of having known him since 1958 during his visit to Ranchi. Besides, when Bepin Babu checked the injury on his right knee, he realised he had no memory of this injury. Hence, to solve the confusing puzzle about his Ranchi visit, Bepin Babu decided to contact Dinesh Mukerji to check if the latter remembered the incidents that happened in 1958. This is the only way he felt all his doubts and confusion could be clarified.

Why did Bepin Babu hesitate to visit Mr. Mukerji? Why did he finally decide to phone him?

Initially Bepin Babu hesitated to visit Mr. Mukerji because he was afraid of Dinesh’s ruthless sarcasm that he might need to face. He rather ignored whatever details that Parimal divulged in the book store and regarded all as false. Nonetheless, the thought how Parimal Ghose knew so many of his personal details troubled him and he decided to finally check with Mr. Mukerji for clarity. Hence, he decided to contact Mr. Mukerji over call to avoid embarrassment right on his face.

What did Mr. Mukerji say? Did it comfort Bepin Babu, or add to his worries?

Mr. Mukerji quickly checked his diary and confirmed both he and Bepin Babu had visited Ranchi in October 1958. This confirmation put Bepin Babu in a fix and he was unable to figure out why and how come he didn’t have any memory of his Ranchi visit.

Who was Chunilal? What did he want from Bepin Babu?

Chunilal was Bepin Babu’s school mate. He’d been having a rough time lately and had been coming to see Bepin Babu for a job. Bepin Babu knew he could not do much to help Chunilal. However, Chuni kept turning up to his house like a bad penny often.

Why was Dr. Chanda puzzled? What was unusual about Bepin Babu’s loss of memory?

Dr. Chanda became puzzled after listening to Bepin Babu’s lapse of memory. He mentioned that this medical condition was typically outside his field of experience. Bepin Babu’s case was little complex because he remembered everything related to his past except for his Ranchi visit. Hence, Dr. Chanda suggested him to visit Ranchi to try recollecting any bygone incident that might remind him of the past.

Had Bepin Babu really lost his memory and forgotten all about a trip to Ranchi?

Perhaps, no. Bepin Babu didn’t have any lapse of memory or forgotten all about a trip to Ranchi. From the letter sent by Chunilal, it was evident that he played a trick on Bepin Babu who didn’t help him to get a job somewhere.

Why do you think Chunilal did what he did? Chunilal says he has no money; what is it that he does have?

Chunilal had plotted the entire incident because Bepin Babu never helped him to get a decent job and he was completely penniless. As Bepin Babu never helped him, he wanted to punish him by rekindling a haunting memory of his fall near Hudroo at Ranchi. Chunilal might not have a job or money, but he had a strong imaginative power which he felt would help him to fight the ill phase of his career. Hence, he wrote a novel which is being considered by a publisher and he is hopeful that it would give him a source of income.

Working with the text (Page 69)

The author describes Bepin Babu as a serious and hardworking man. What evidence can you find in the story to support this?

Bepin Babu was described as a serious and hardworking man. He was working daily in his office. It was a big firm and he was doing a responsible job. He had been associated in this firm for the past twenty-five years and had a reputation for being a tireless and conscientious worker.

Why did Bepin Babu change his mind about meeting Chunilal? What was the result of this meeting?

Chunilal would often come to visit Bepin Babu to request him in order to get a job. But Bepin Babu refused to meet him. However, that day he changed his mind and decided to meet Chunilal and enquire to him if the latter remembers of his Ranchi visit. However, Chunilal confirmed about Bepin Babu’s visit to Ranchi. Hearing this, Bepin Babu in a puzzled state decided to consult a specialist doctor and get treatment for his memory loss.

Bepin Babu lost consciousness at Hudroo Falls. What do you think was the reason for this?

Bepin Babu lost consciousness at Hudroo Falls as he realised this was the final place which would help him to recollect his memory of his previous visit to Ranchi in 1958. However, he couldn’t recollect a single incident and soon fell down beside a boulder near Hudroo and broke his hip by accident.

How do you think Bepin Babu reacted when he found out that Chunilal had tricked him?

When Bepin Babu found out that he was tricked by Chunilal, he was filled with remorse for not helping Chuni in his time of need. He regretted for refusing to help Chunilal and realised that he had indeed become a victim of forgetfulness as he had forgotten the real meaning of friendship at the time of his affluence.

(i) I have to cut my hair every month.

(ii) We had to go for swimming lessons last year.

(iii) She has to tell the principal the truth.

(iv) They had to take the baby to the doctor.

(v) We have to complain to the police about the noise.

(vi) Romit had to finish his homework before he could come out to play.

(vii) I had to repair my cycle yesterday.

Here are a few idioms that you will find in the story. Look for them in the dictionary in the following way.

First, arrange them in the order in which you would find them in a dictionary.

(Clue: An idiom is usually listed under the first noun, verb, adjective or adverb in it. Ignore articles or prepositions in the idiom).

To help you, we have put in bold the word under which you must look for the idiom in the dictionary.)

(ii) break into a smile (break: verb; look under ‘break into something’)

(v) beat about the bush (verb)

Now refer to your dictionary and find out what they mean.

(i) at/from close quarters – This means stay nearby or close by.

(ii) break into a smile – This means to smile suddenly.

(iii) carry on – This means to continue with some task or work.

(v) beat about the bush – This means to make rough guesses without proper knowledge.

Study the sentences in the columns below.

I saw this movie yesterday.

I have seen this movie already.

Bepin Babu has worked here since 2003.

Chunilal has written to a publisher.

I visited Ranchi once, long ago.

I have visited Ranchi once before.

Compare the sentences in the two columns, especially the verb forms.

Answer the following questions about each pair of sentences.

(i) Which column tells us that Bepin Babu is still working at the same place?

(ii) Which column suggests that Chunilal is now waiting for a reply from the publisher?

(iii) Which column suggests that the person still remembers the movie he saw?

(iv) Which column suggests that the experience of visiting Ranchi is still fresh in the speaker’s mind?

Given below are jumbled sentences. Working in groups, rearrange the words in each sentence to form correct sentences.

You will find that each sentence contains an idiomatic expression that you have come across in the lesson. Underline the idiom and write down its meaning. Then use your dictionary to check the meaning.

One sentence has been worked out for you as an example.

Jumbled sentence: vanished/ The car/ seemed to/ into thin/ have/ air.

Ans: The car seemed to have vanished into thin air.

Idiom: vanished into thin air: disappeared or vanished in a mysterious way

(i) Stop beating about the bush and tell me what you want.

Idiom: beating about the bush – To avoid coming to the main point and talk vaguely

(ii) If you don’t pay attention to the announcement, you might board the wrong train.

(iii) The villagers tried to pin the crime on the young woman.

Idiom: pin the crime – To place the blame or responsibility of a crime and implicate it on a wrong person

(iv) Bepin Babu loved telling people that he was under doctor’s orders to eat early.

(v) The teacher raised his eyebrows when the students said that they had revised all their lessons.

Idiom: raised his eyebrows – To express surprise or doubt

What do you think happened after Bepin Babu came to know the truth? Was he angry with this friend for playing such a trick on him? Or do you think he decided to help a friend in need?

When Bepin Babu came to know the truth of how Chunilal tricked him, he was ashamed and filled with remorse combined with a mixed feeling of anger for not helping Chuni when he would come to him asking for help. Bepin Babu was angry on Chunilal for his ill health, however he was also happy to know that he didn’t suffer any memory loss whatsoever. Soon after he realised that he had indeed become a victim of forgetfulness by forgetting the real purpose of friendship due to his affluence. Bepin Babu learnt a lesson from this incident and he decided to always help a friend in need going forward.