Exercise 9.4, which can be found in page 164 of your NCERT textbook, is an optional one and is mainly given to assess your understanding of the subject and the concepts that are discussed so far in the textbook. NCERT Solutions for Class 9 Maths Chapter 9 Area of Parallelograms and Triangles Exercise 9.4 gives a clear and step by step detailed solution. 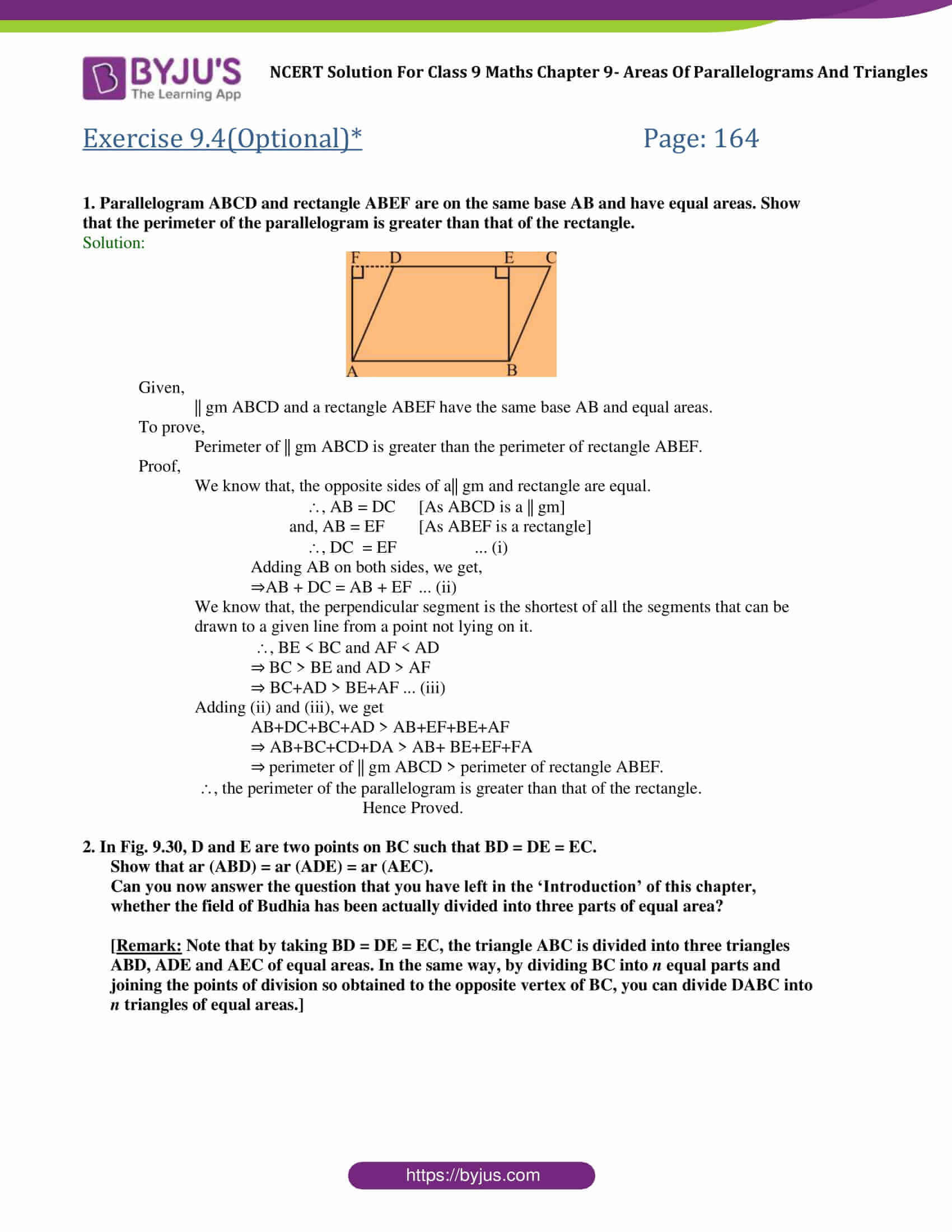 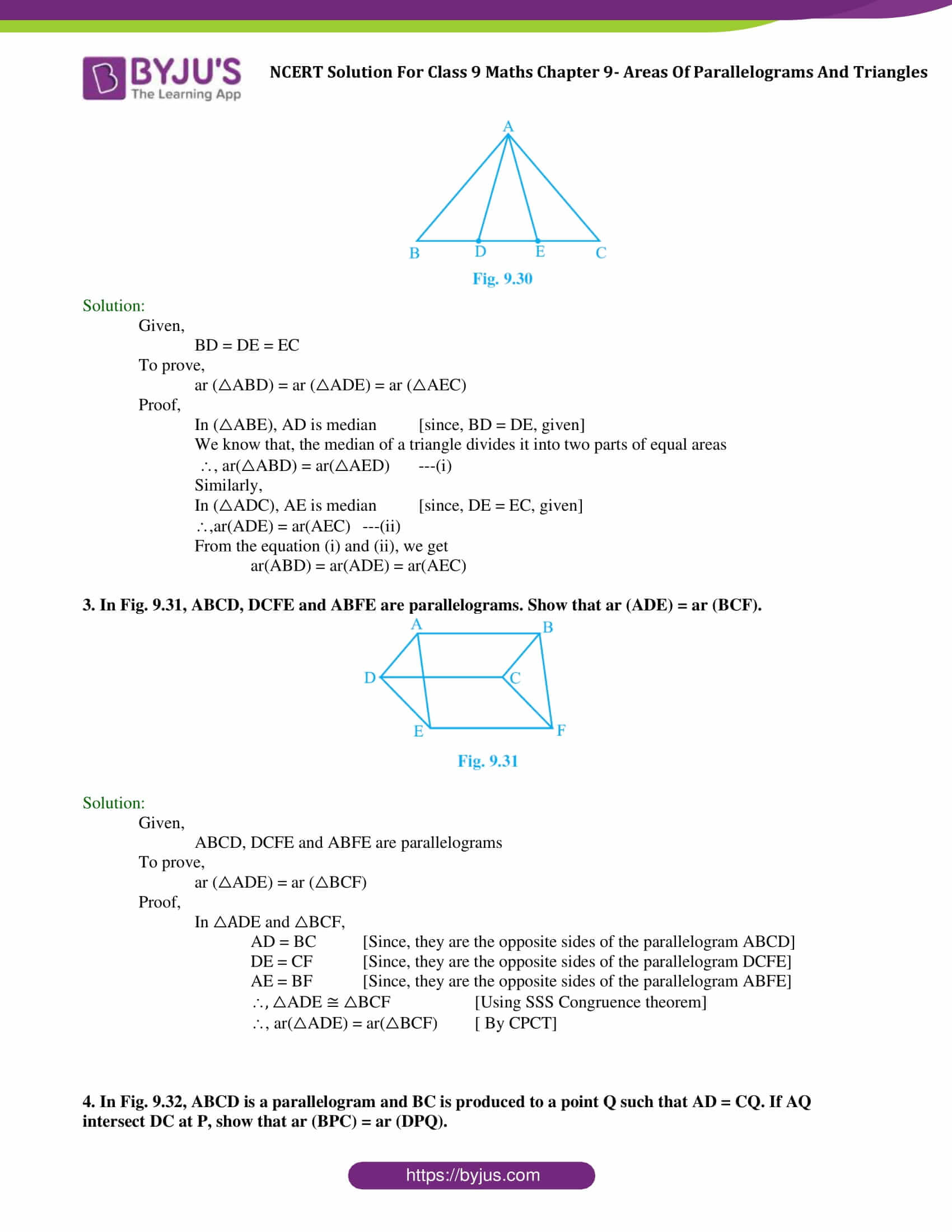 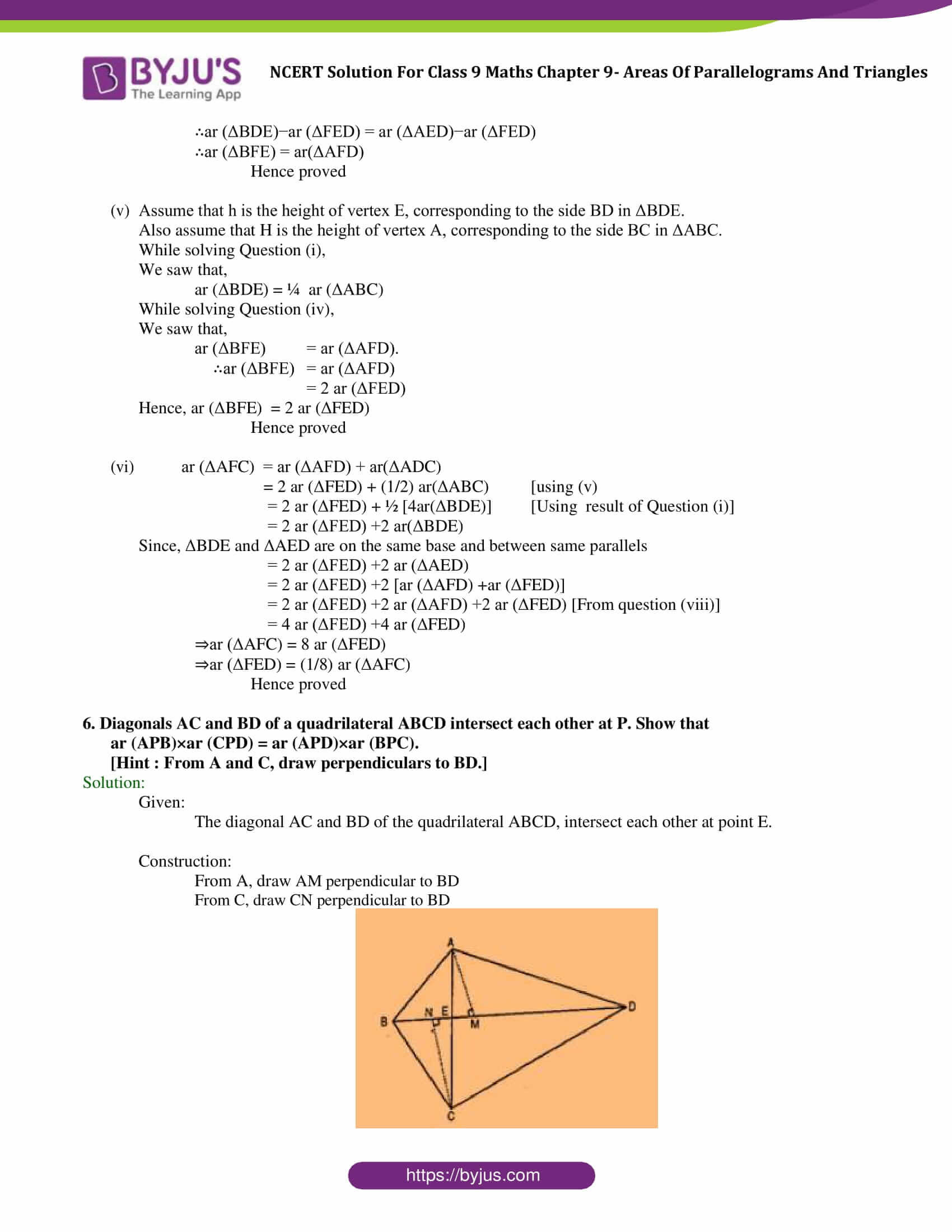 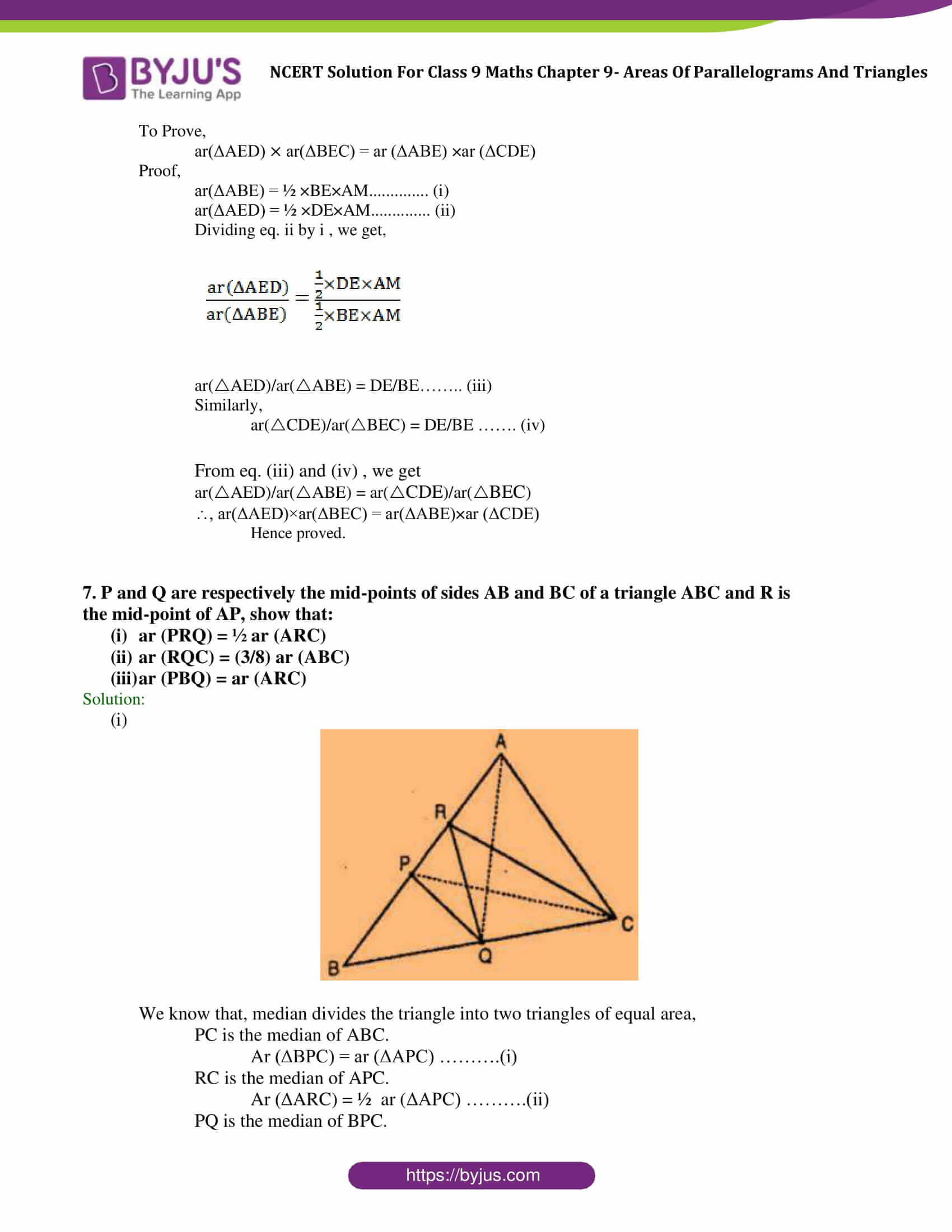 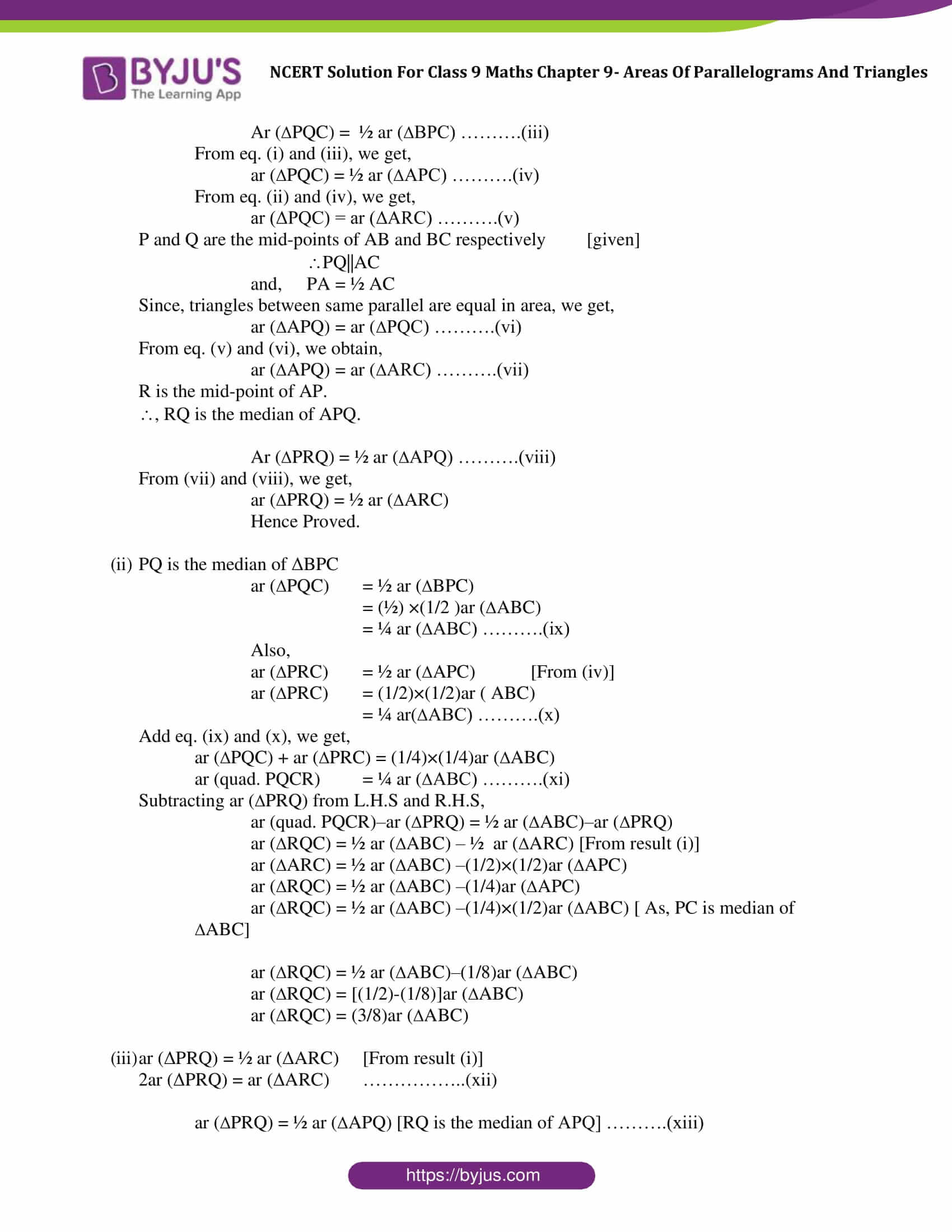 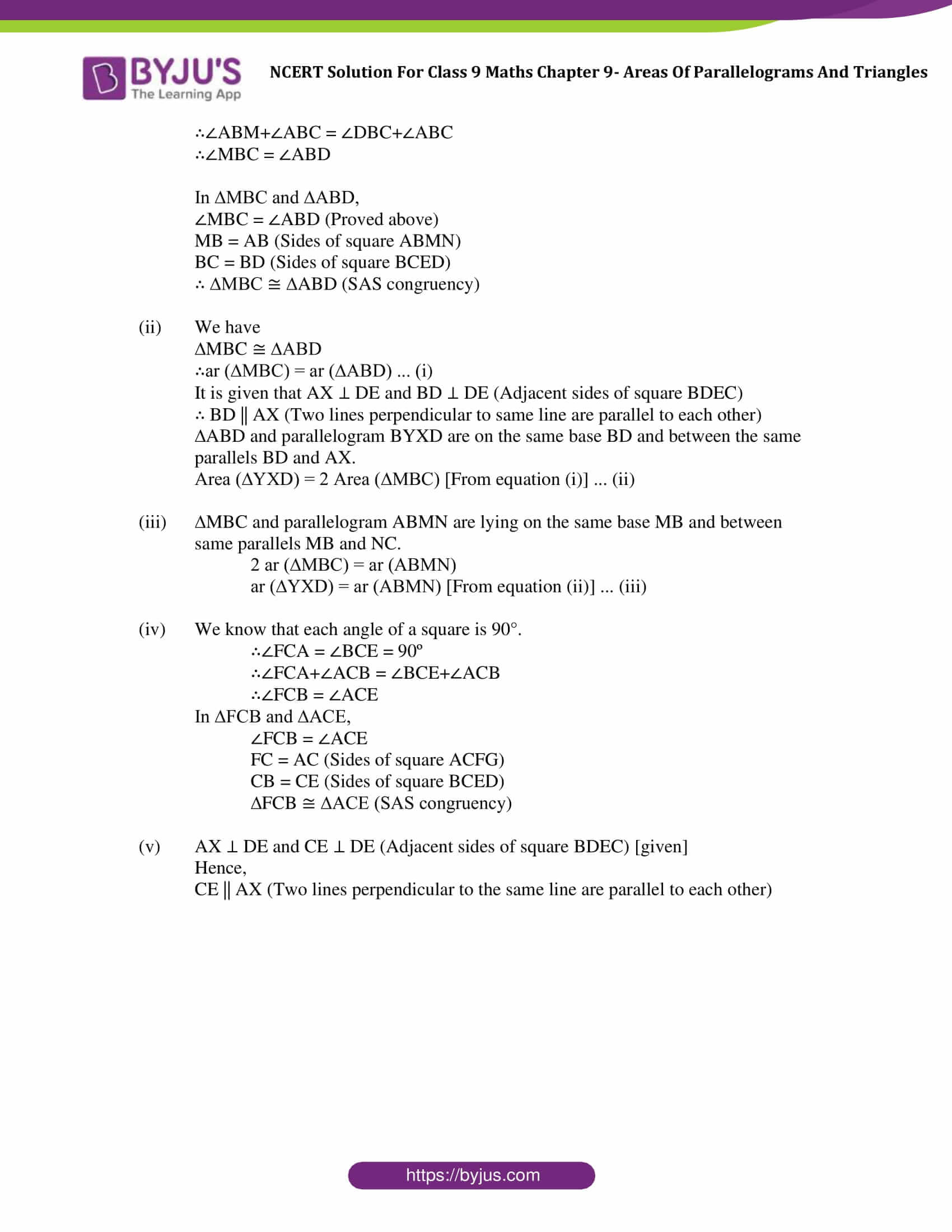 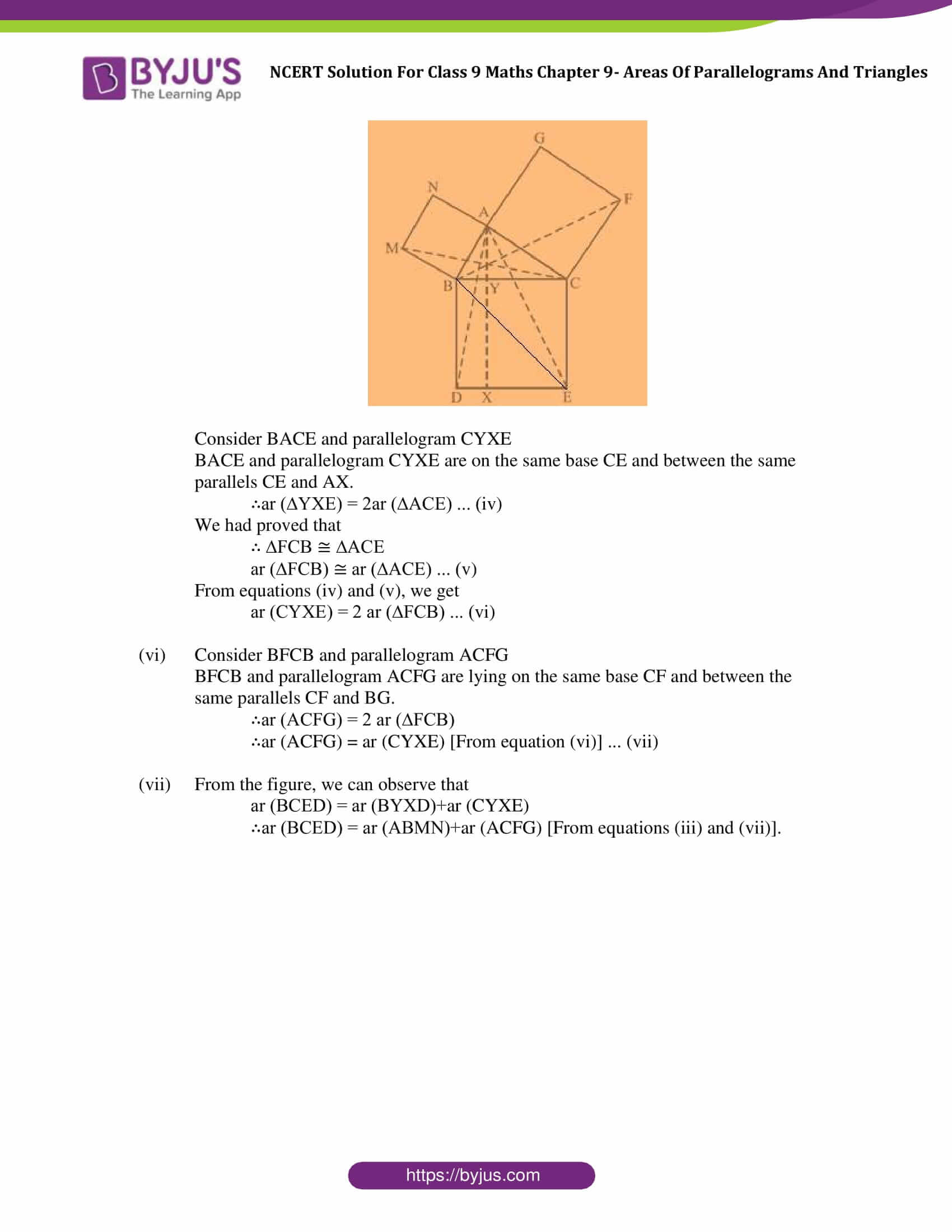 1. Parallelogram ABCD and rectangle ABEF are on the same base AB and have equal areas. Show that the perimeter of the parallelogram is greater than that of the rectangle. || gm ABCD and a rectangle ABEF have the same base AB and equal areas.

Perimeter of || gm ABCD is greater than the perimeter of rectangle ABEF.

We know that, the opposite sides of a|| gm and rectangle are equal.

Adding AB on both sides, we get,

We know that, the perpendicular segment is the shortest of all the segments that can be drawn to a given line from a point not lying on it.

, the perimeter of the parallelogram is greater than that of the rectangle.

Can you now answer the question that you have left in the ‘Introduction’ of this chapter, whether the field of Budhia has been actually divided into three parts of equal area?

[Remark: Note that by taking BD = DE = EC, the triangle ABC is divided into three triangles ABD, ADE and AEC of equal areas. In the same way, by dividing BC into n equal parts and joining the points of division so obtained to the opposite vertex of BC, you can divide DABC into n triangles of equal areas.] We know that, the median of a triangle divides it into two parts of equal areas ABCD, DCFE and ABFE are parallelograms

AD = BC [Since, they are the opposite sides of the parallelogram ABCD]

DE = CF [Since, they are the opposite sides of the parallelogram DCFE]

AE = BF [Since, they are the opposite sides of the parallelogram ABFE] ABCD is a parallelogram

Since, median of a triangle divides it into two parts of equal areas.

Since, median of a triangle divides it into two parts of equal areas.

5. In Fig.9.33, ABC and BDE are two equilateral triangles such that D is the mid-point of BC. If AE intersects BC at F, show that: 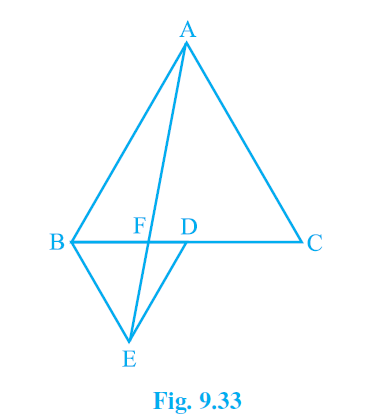 (i) Assume that G and H are the mid-points of the sides AB and AC respectively.

Join the mid-points with line-segment GH. Here, GH is parallel to third side.

, BC will be half of the length of BC by mid-point theorem. 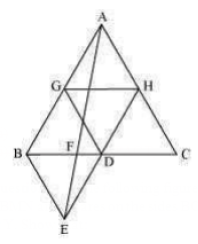 We can say that,

Since both triangles are equilateral triangle, we can say that, 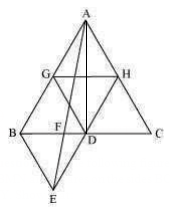 AD is the median of ΔABC.

(iv) ΔBDE and ΔAED lie on the same base (DE) and are in-between the parallel lines DE and AB.

Subtracting ar(ΔFED) from L.H.S and R.H.S,

(v) Assume that h is the height of vertex E, corresponding to the side BD in ΔBDE.

Also assume that H is the height of vertex A, corresponding to the side BC in ΔABC.

While solving Question (i),

Since, ΔBDE and ΔAED are on the same base and between same parallels

6. Diagonals AC and BD of a quadrilateral ABCD intersect each other at P. Show that

[Hint : From A and C, draw perpendiculars to BD.]

The diagonal AC and BD of the quadrilateral ABCD, intersect each other at point E.

From A, draw AM perpendicular to BD 7. P and Q are respectively the mid-points of sides AB and BC of a triangle ABC and R is the mid-point of AP, show that: We know that, median divides the triangle into two triangles of equal area,

PC is the median of ABC.

RC is the median of APC.

PQ is the median of BPC.

Since, triangles between same parallel are equal in area, we get,

R is the mid-point of AP.

(ii) PQ is the median of ΔBPC

But, we know that,

At the same time,

8. In Fig. 9.34, ABC is a right triangle right angled at A. BCED, ACFG and ABMN are squares on the sides BC, CA and AB respectively. Line segment AX ^ DE meets BC at Y. Show that: 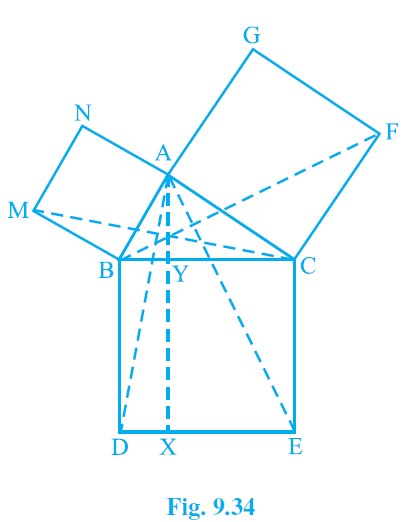 Note : Result (vii) is the famous Theorem of Pythagoras. You shall learn a simpler proof of this theorem in Class X.

BC = BD (Sides of square BCED)

∆ABD and parallelogram BYXD are on the same base BD and between the same parallels BD and AX.

(iii) ∆MBC and parallelogram ABMN are lying on the same base MB and between same parallels MB and NC. 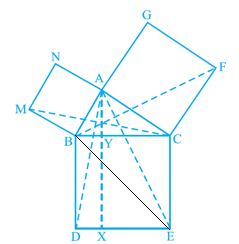 BACE and parallelogram CYXE are on the same base CE and between the same parallels CE and AX.

We had proved that

BFCB and parallelogram ACFG are lying on the same base CF and between the same parallels CF and BG.

(vii) From the figure, we can observe that

This will also help you to understand this topic. Summary of the concepts discussed in the NCERT Solution for Class 9 Maths Chapter 9 Area of Parallelograms and Triangles are as follow: 1. Area of a figure is a number (in some units) associated with the part of the plane enclosed by that figure. 2. Two congruent figures have equal areas but the converse need not be true. 3. If a planar region formed by a figure T is made up of two non-overlapping planar regions formed by figures P and Q, then are (T) = ar (P) + ar (Q), where (X) denotes the area of figure X. 4. Two figures are said to be on the same base and between the same parallels, if they have a common base (side) and the vertices, (or the vertex) opposite to the common base of each figure lie on a line parallel to the base. 5. Parallelograms on the same base (or equal bases) and between the same parallels are equal in area. 6.