Introduction
There are several changes we come across daily e.g dissolving sugar in water, or flattening a metal rod by beating it. These involve changes in the form of the substance. Changes can be classified as:
(i) Physical
(ii) Chemical

To know the Difference Physical and Chemical Change, visit here.

Formation of metal oxides are examples of chemical changes. They are formed by the reaction of oxygen in air.
– Burning of Magnesium ribbon:
– 2Mg + O2 → 2MgO
– The product formed is the oxide of magnesium, which is in the form of ash. It does not look anything like the magnesium ribbon used for burning.

Reaction of metallic oxides with water

Reaction between baking soda and vinegar

When a pinch of baking soda is added to vinegar we hear a hissing sound and observe the formation of bubbles.

Observations that indicate a chemical change

For More Information On Corrosion of Metals, Watch The Below Video: 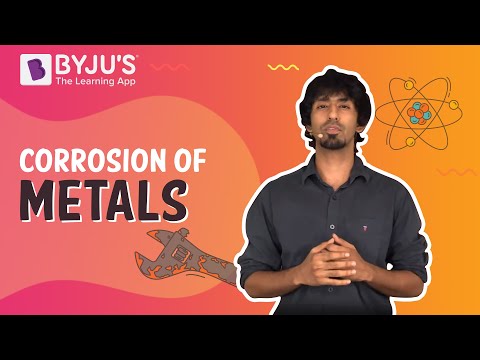 To know more about Rusting of Iron, visit here.

Galvanization
– The process of depositing zinc on the surface of Iron to prevent rusting is called as galvanisation.
– Example: Iron water pipes are galvanised. Ships are made out of iron which is galvanised. Due to the presence of salts in seawater, the process of rusting is hastened. Hence ships need to replace their iron body every year.

Crystallisation
– The process of separation of salts from their solution is called as crystallisation. It is a purification technique that purifies seawater or separates crystals from impure samples. It is a physical change.

When substances made of Iron are exposed to oxygen and moisture in the atmosphere, it forms a red layer, which is called rust.

What is meant by ‘Corrosion of metals’?

Corrosion is the deterioration of a material as a result of its interaction with its surroundings and can occur at any point or at any time during petroleum and natural gas processing.

What are ‘Metallic oxides’?

Metal oxides are crystalline solids that contain a metal cation and an oxide anion. They react with water to form bases or with acids to form salts.