In Chapter 8 of CBSE Class 8 Science, students will learn about the basic structural unit of an organ, known as the cell. Cells may be compared to bricks. Bricks are normally assembled to create a building. Similarly, cells are assembled to build the body of every organism. We also provide the solutions with the CBSE Class 10 Science Chapter 8-Cell-Structure and Functions Objective Questions framed from this chapter of the textbook.

Meanwhile, based on the modified exam pattern that includes more of MCQs, we have also provided the chapter-wise CBSE Class 10 Science objective questions that are expected to be included in the exam papers for the final exams.

Find here some of the main topics discussed in this chapter. The MCQs are also based on the major concepts from these topics:

8.1 Discovery of the Cell

8.6 Comparison of Plant and Animal Cells

1. Which organelle is called the “powerhouse of the cell”?

Solution: The mitochondrion is called the “powerhouse of the cell” because it is responsible for producing energy-rich ATP molecules. Cells use ATP for all their energy needs.

2. Which of the following instruments can be used to observe cells?

Solution: A microscope is an optical instrument used to observe objects that are invisible to the naked eye. It is used to view and study cell structure. The science of viewing small objects using a microscope is called microscopy.

3. Which of the following scientists discovered cells in cork slices?

Solution: Robert Hooke in 1665 observed thin slices of cork under a simple magnifying device. He observed box-like structures and named them ‘cells’. This is because these structures reminded him of the cells in a monastery.

4. Which among the following organelles synthesizes lipids?

5. Which of the following statements is incorrect about Endoplasmic Reticulum?

A. It is involved in lipid synthesis.

B. It is involved in ribosome synthesis.

C. It is the post office of the cell.

Answer: (C) It is the post office of the cell

∙ Golgi apparatus is called the post office of the cell since it is involved in the packaging, processing and transportation of substances.

6. Which among the following is not the function of lysosomes?

A. Breaking down of food particles.

B. Protection against the pathogens.

Solution: Lysosomes break down and digest food particles in a cell. They also help the cell to protect itself from pathogens, by forming a complex along with the pathogen, called phagosome. They also aid in recycling proteins and digest worn-out cells. Hence, they are known as the ‘suicidal bags’. But they do not aid in photosynthesis.

7. Assertion (A): Chromosomes are responsible for the transfer of characteristics from parents to offspring.

Reason (R): Chromosomes are present in the nucleus.

A. Both A and R are true and R is the correct explanation of A

B. A is true but R is false

C. A is false but R is true

D. Both A and R are true but R is not the correct explanation of A

Answer: (D) Both A and R are true but R is not the correct explanation of A

Solution: In the nucleus, thread-like structures called chromosomes are present. These carry all the information needed by the cell to function and to reproduce. They are responsible for inheritance i.e., transfer of characteristics from parents to the offspring. Hence, both the statements are correct. Chromosomes being present in the nucleus has nothing to do with their function.

8. Among the following which cell can be seen with an unaided eye?

Solution: Most of the cells are microscopic in size and are not visible to the unaided eye. They need to be enlarged or magnified by a microscope. Some cells are big enough to be seen with the unaided eye. Example of that is a hen’s egg which is considered as a single cell. It can be seen by the naked eye.

9. The fluid present between the cell membrane and the nucleus is called 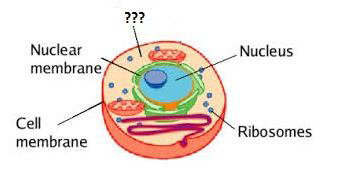 Solution: The jelly-like fluid present between the cell membrane and the nuclear membrane is called the cytoplasm. It houses all the cellular organelles and is the site for most of the metabolic activities taking place in the cell.

(i) Ribosomes are located on the chromosomes.

(ii) Cell is located in the nucleus.

(iii) Chloroplasts are located in the nucleolus.

11. I am a double-membraned cell organelle. I produce energy-rich molecules called ATP. I have my own genetic material. Who am I? 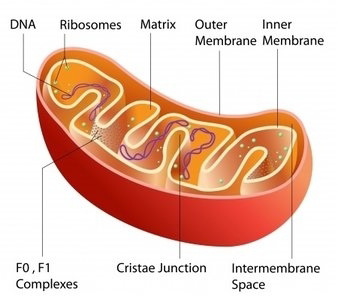 Mitochondria are double-membraned cell organelle present in the cytoplasm. They have their own genetic material. They produce ATP, which are energy-rich molecules. Since they produce energy rich molecules, they are called the ‘powerhouse’ of the cell.

12. Which of the following is the non-living part of the cell?

Solution: Cell wall is the non-living part of the cell. It allows all the substances to pass through it. They only have structural function and determine the shape of cells. On the contrary, cell membrane which is living, is active and has molecules present in it that are always dynamic.

A. Vacuole of amoeba

B. False feet of amoeba

Answer: (B) False feet of amoeba 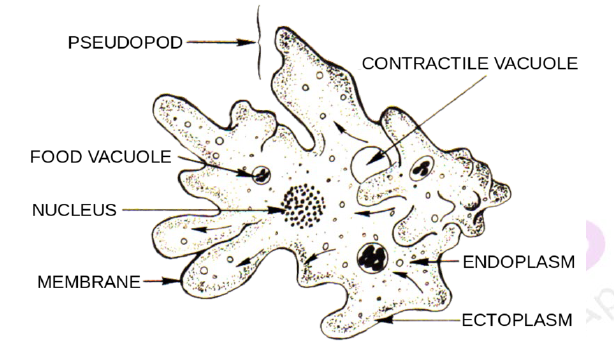 Amoeba have pseudopodia, which are projections of varying lengths protruding out of its body. Amoeba does not have a regular shape and uses pseudopodia for locomotion and digestion.

14. Based on the following options, how does a plant cell differ from an animal cell?

Solution: An outer thick layer of plant cell is called the cell wall. This additional layer surrounding the cell membrane is required by the plants for protection and for the shape of the cell. All the green plants contain the pigment chlorophyll. It traps sunlight required for photosynthesis. Chlorophyll are present inside the chloroplasts. Mitochondria (sing. mitochondrion) is present in both animal and plant cells. It produces energy in the form of ATP.

15. Based on the given statements, choose the correct option.

Statement 1: Amoeba and WBCs use pseudopodia for locomotion.

Statement 2: Amoeba and WBCs are both capable of independent existence.

Statement 3: Amoeba and WBCs can change their shapes.

A. Statement 3 is incorrect.

B. Statement 1 and 2 are incorrect.

Answer: (B) Statement 1 and 2 are incorrect.

Solution: Amoeba and WBCs have cell membranes and can change their shapes. WBCs use pseudopodia to engulf pathogens during phagocytosis, while amoeba uses pseudopodia for locomotion and engulfing food. Amoeba is a unicellular organism and can exist independently. WBCs, on the other hand, are incapable of independent existence.

16. If your father has brown eyes, you may also have brown eyes. If your mother has curly hair, you might also end up having curly hair. This transfer of characteristics is due to the transfer of ______.

Solution: Nucleus contains thread-like structures called chromatins. Chromosomes are condensed forms of chromatin. During cell division, these chromosomes carry genes and help in the transfer of characters from parents to offspring.

17. In an animal cell, which among the following organelles has its own DNA?

Solution: Mitochondria and plastids are semi autonomous cell organelles since they possess their own DNA and ribosomes. Chloroplasts, chromoplasts and leucoplasts are types of plastids and are absent in animal cells.

18. Which organelle is called the “suicide bag” of the cell?

19. The technique in which cellular components are coloured for better observation is called:\

Solution: Cell staining is the technique of colouring different cellular organelles. It is used to visualise cells and cellular components better under a microscope. By using different stains, one can preferentially stain specific cell components, such as a nucleus, cell wall, or the entire cell.

20. Which of the following is not a postulate of cell theory?

A. Cell is the basic unit of life.

B. All cells develop from pre-existing cells.

D. All living organisms are composed of cells.

Solution: The main postulates of cell theory are:

• All living organisms are composed of one or more cells.

• Cell is the basic unit of structure, function, and organisation in all organisms.

All living cells do not have cell walls. It is present only in plants, fungi and bacteria.