Soil: Soil Horizons and its Types

Soil is one of the most important natural resources. It supports varied life forms.

Soils are composed of different layers but how to recognize the order of different layers? To know the precedence of layers, we can perform an activity. Add some soil to a glass of water and allow it to settle. Refer the figure below. The rotting dead matter in the soil is known as humus. Humus provides necessary nutrients to the soils.

Weathering – It is the process of formation of soils. Soils are formed by breaking down of rocks by water, wind and different climatic conditions.

A vertical cross section of different layers of soil is known as soil profile. Each layer has different texture, colour, chemical composition and depth. These layers are known as horizons. 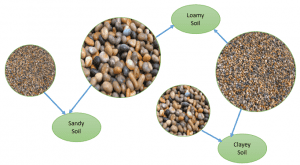 Absorption of water by soils

Take 100 gm of water in a flask and start pouring it over the soil. Note the initial level of water. Keep pouring until the water starts dripping from the soil. Using the calculations below, we can calculate the percentage of water absorbed by soil.

Get detailed solutions to the questions of NCERT Books for chapter Soil along with detailed explanation only at BYJU’S.