NCERT Solutions are exceptionally helpful books while preparing for the CBSE Class 12 Economics Board examinations. These Solutions are crafted by the subject matter experts to help students grasp the concepts effortlessly. This chapter is a brief introduction to Microeconomics.

NCERT Solution for Class 12 Economics Chapter 1 – Introduction gives a brief presentation about the subject with the exercises. Economics is a social science that studies human traits which aim at the distribution of scant resources in such a way that buyer can maximise their satisfaction, manufacturers can maximise their surplus yield, and society can maximise its social comfort. It is all about making choices in the existence of insufficiency or scarcity.

Scarcity means inadequacy of resources and goods in relation to their demand. Scarcity is the source of all economic issues. 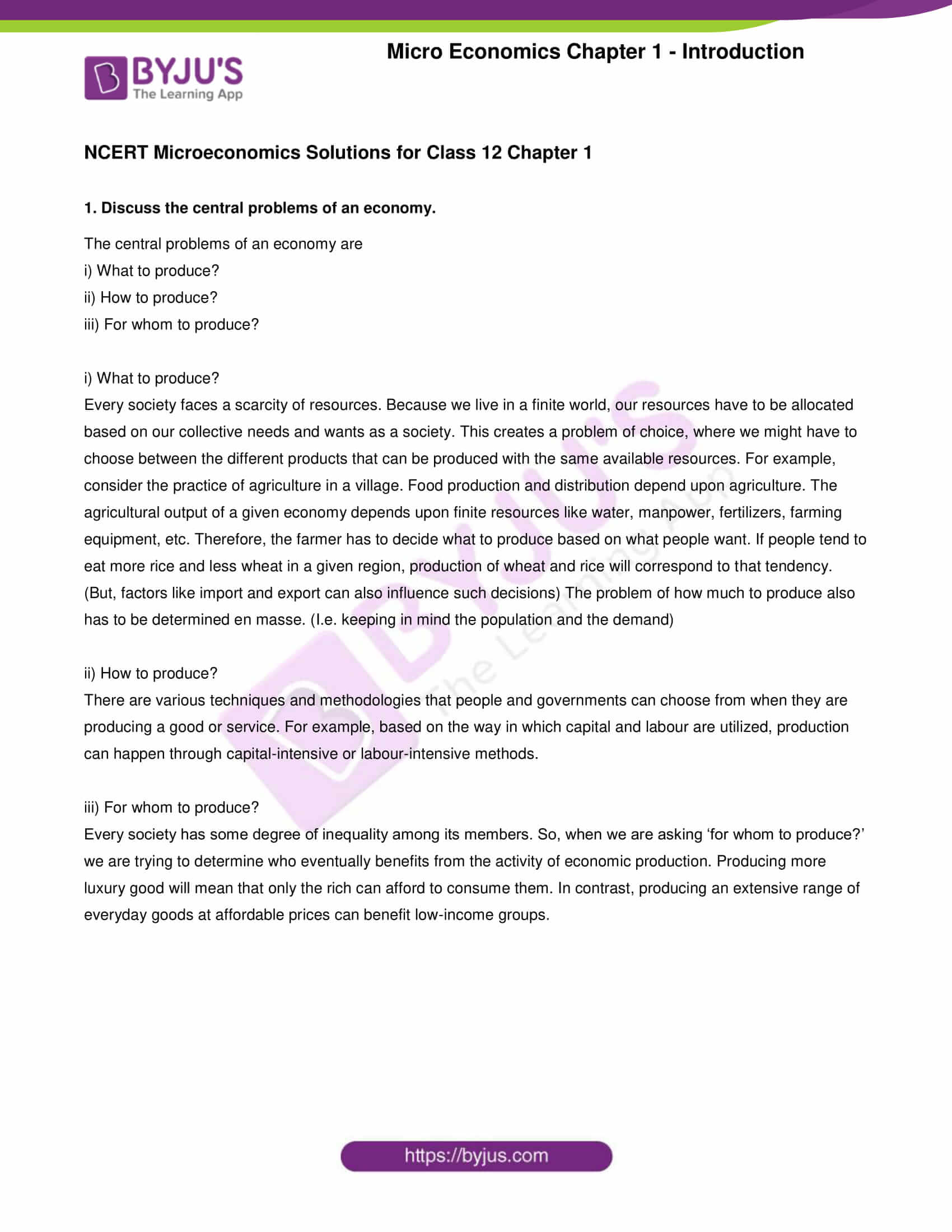 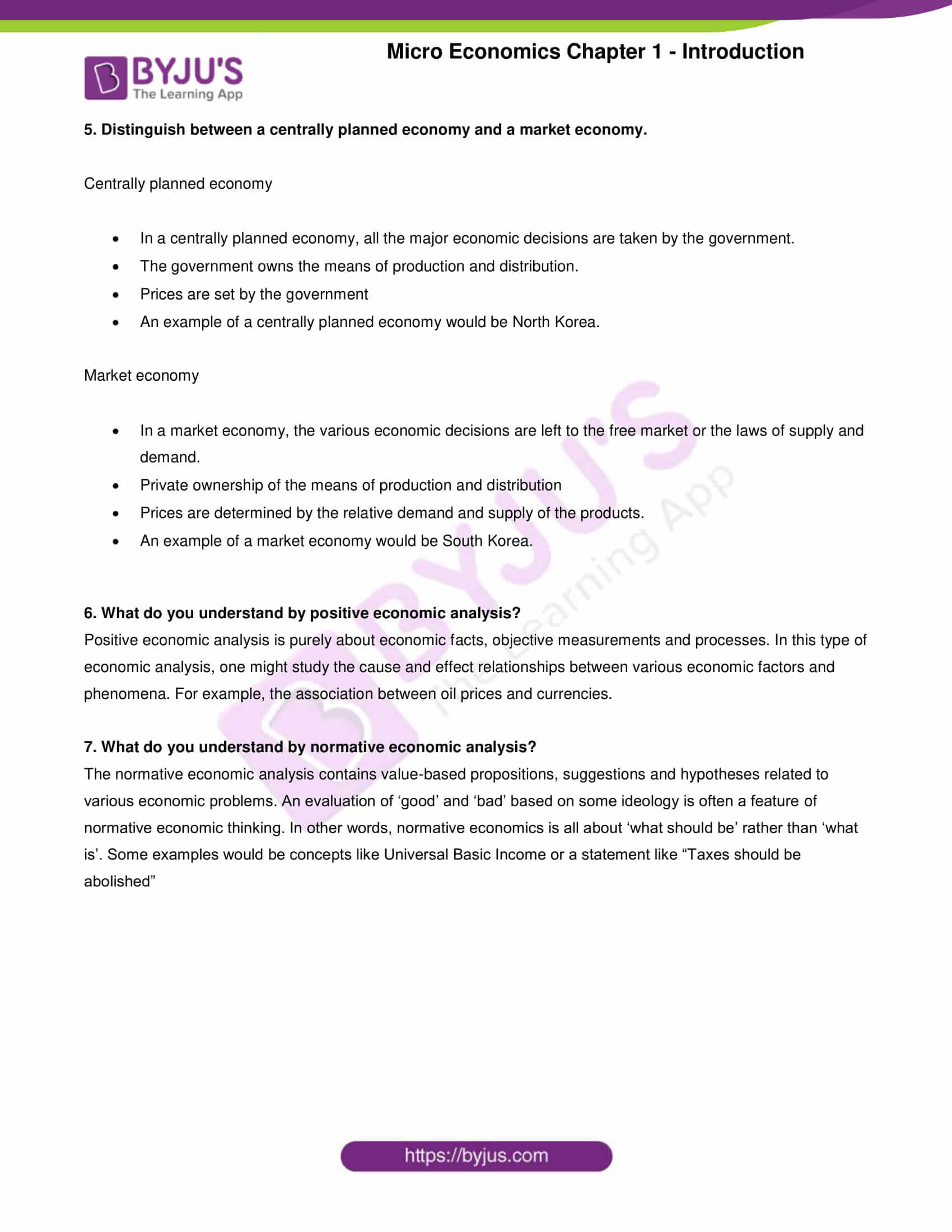 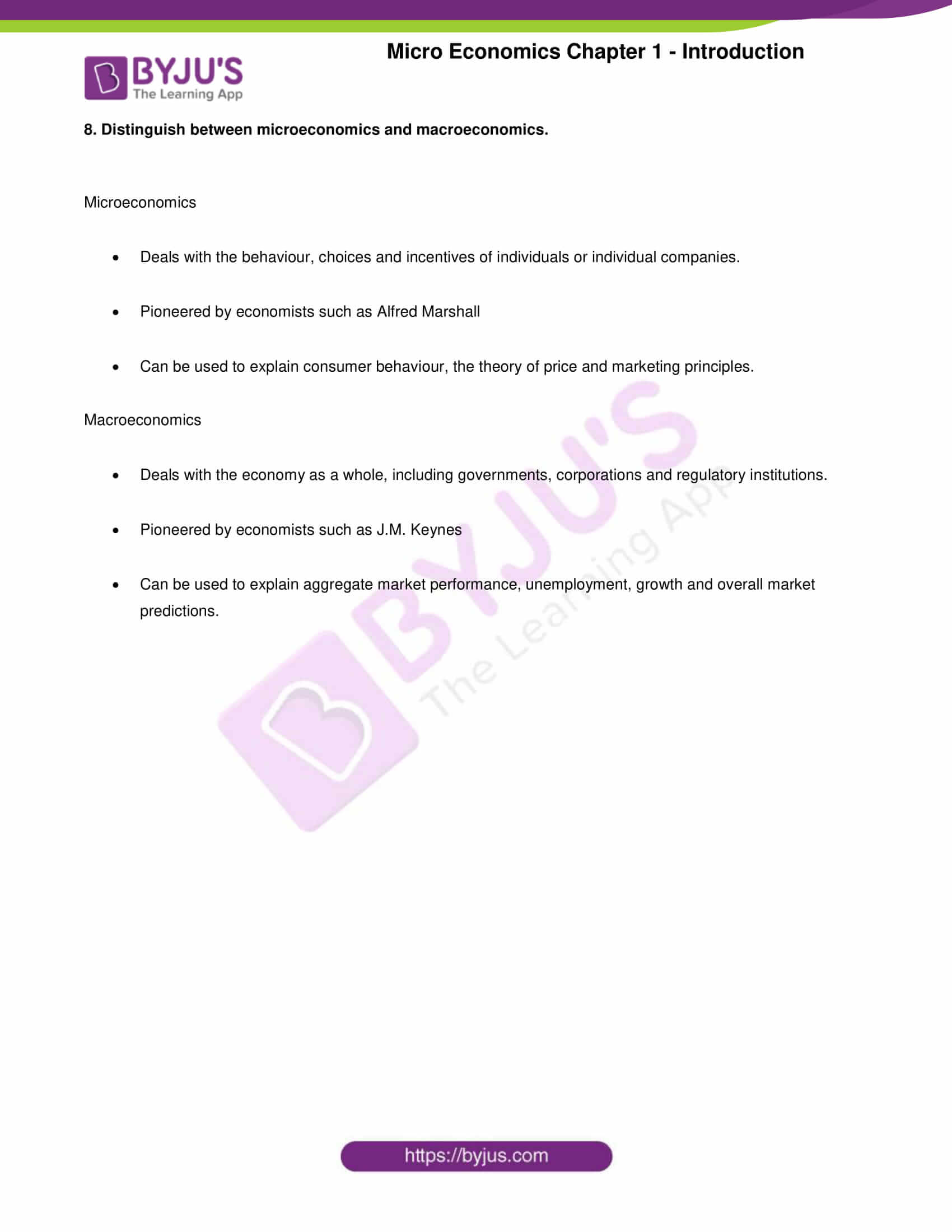 1. Discuss the central problems of the economy.

The central problems of an economy are

i) What to produce?

ii) How to produce?

iii) For whom to produce?

i) What to produce?

Every society faces a scarcity of resources. Because we live in a finite world, our resources have to be allocated based on our collective ‘needs and wants’ as a society. This creates a problem of choice, where we might have to choose between the different products that can be produced with the same available resources. For example, consider the practice of agriculture in a village. Food production and distribution depend upon agriculture. The agricultural output of a given economy depends upon finite resources like water, workforce, fertilisers, farming equipment, etc. Therefore, the farmer has to decide what to produce based on what people want. If people tend to eat more rice and less wheat in a given region, the production of wheat and rice will correspond to that tendency. (But factors like import and export can also influence such decisions.) The problem of how much to produce also has to be determined en masse. (i.e., keeping in mind the population and the demand.)

ii) How to produce?

There are various techniques and methodologies that people and governments can choose from when they are producing a good or service. For example, based on the way in which capital and labour are utilised, production can happen through capital-intensive or labour-intensive methods.

iii) For whom to produce?

Every society has some degree of inequality among its members. So, when we are asking ‘for whom to produce?’, we are trying to determine who eventually benefits from the activity of economic production. Producing more luxury goods will mean that only the rich can afford to consume them. In contrast, producing an extensive range of everyday goods at affordable prices can benefit low-income groups.

2. What do you mean by the production possibilities of an economy?

The production possibilities of an economy refer to the capability of an economy to produce different goods with the available resources, accessible technologies and other means of production.

3. What is a production possibility frontier?

4. Discuss the subject matter of Economics.

The subject matter of Economics is often categorised into two main branches – Microeconomics and Macroeconomics. Economics is often defined as the study of the production, distribution and consumption of goods and services. Another way of looking at Economics would be in terms of scarcity and how society organises the exchanges that happen between various scarce resources.

Microeconomics is about individual consumers and businesses whose decisions and behaviour affect the economy and vice versa. For example, a topic like the costs of production would come under Microeconomics.

On the other hand, Macroeconomics is all about how the economy functions as a whole. For example, topics like national income and aggregate quantitative measures like deflation and inflation would come under Macroeconomics.

5. Distinguish between a centrally planned economy and a market economy.

6. What do you understand by positive economic analysis?

Positive economic analysis is purely about economic facts, objective measurements and processes. In this type of economic analysis, one might study the cause-and-effect relationships between various economic factors and phenomena. For example, the association between oil prices and currencies.

7. What do you understand by normative economic analysis?

The normative economic analysis contains value-based propositions, suggestions and hypotheses related to various economic problems. An evaluation of ‘good’ and ‘bad’ based on some ideology is often a feature of normative economic thinking. In other words, normative economics is all about ‘what should be’ rather than ‘what is’. Some examples would be concepts like Universal Basic Income or a statement like, “Taxes should be abolished.”