NCERT Solutions for Class 9 Economics Chapter 4 – Food Security in India contains the solutions to the exercises given in the economics book. NCERT Solutions of the exercises are provided which will help class 9 students to develop a skill for writing answers in a proper way. These NCERT solutions will be useful for school exams as the source of these are from the NCERT textbooks. The NCERT solutions are easy and accurate which will align school students’ preparation as per the questions asked in the examinations. 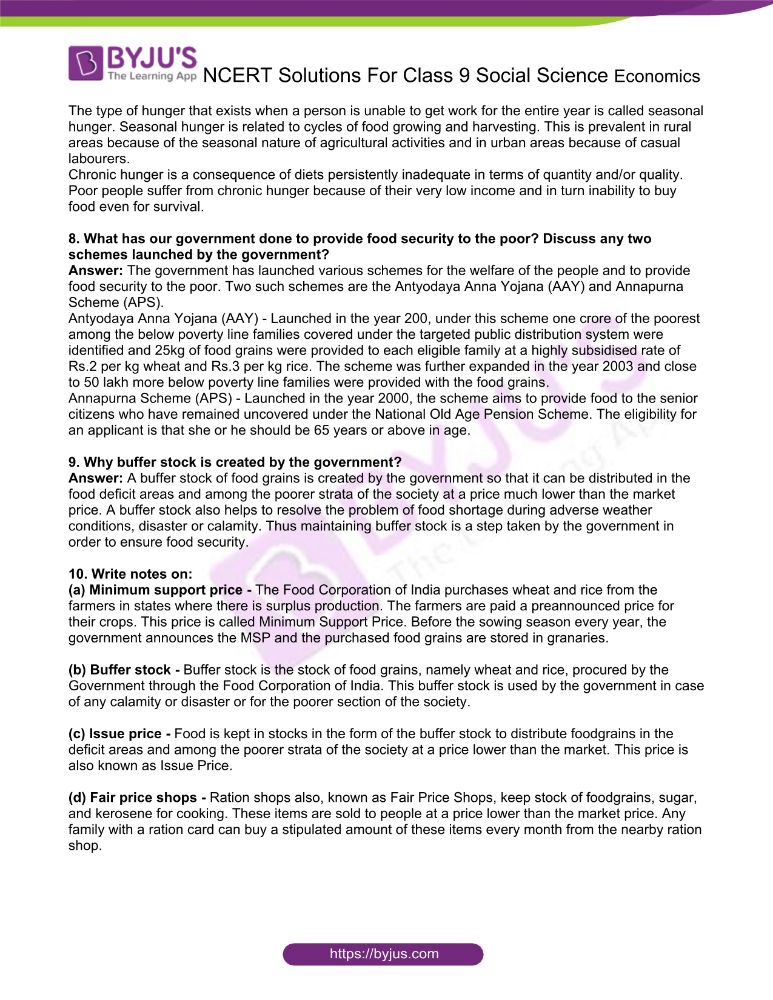 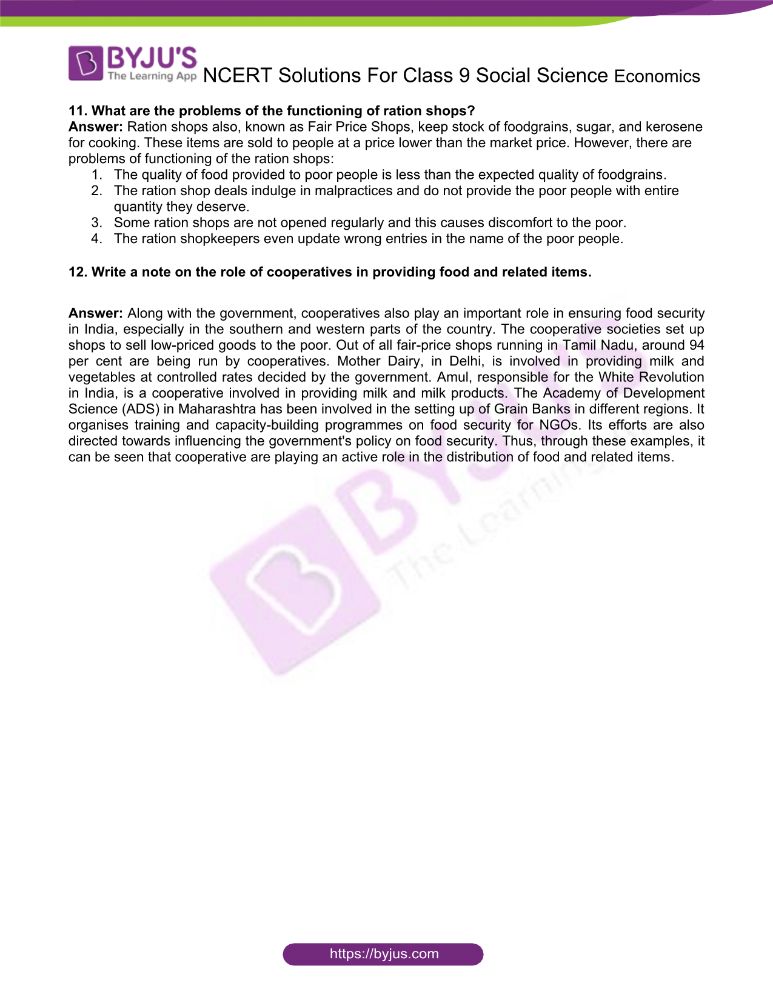 The solutions for Chapter 4 of Economics are given below. Students should also check NCERT Solutions for Class 9 for other subjects.

1. How is food security ensured in India?

To ensure the availability of food to all sections of the society the Indian government carefully designed food security system, which is composed of two components: (a) buffer stock and (b) public distribution system. Food security is ensured in India in the following ways:

2. Which are the people more prone to food insecurity?

The people living below the poverty line might be food insecure all the time while better-off people might also turn food insecure due to calamity or disaster. The social composition along with the inability to buy food also plays a role in food insecurity. The SCs, STs and some sections of the OBCs (lower castes among them) who have either poor land-based or very low land productivity are prone to food insecurity. Other than these sections, people hit by a natural disaster are also likely to be food insecure.

3. Which states are more food insecure in India?

4. Do you believe that green revolution has made India self-sufficient in food grains? How?

Post-independence, India adopted a new strategy in the agricultural field which led to the Green Revolution, especially for the production of wheat and rice. Ever since India has avoided famine even in adverse weather conditions and various varieties of crops grow all across the country. This availability of food grains even in adverse conditions at the country level ensured the Government to have a proper food security system. Hence, it can be said that the green revolution has made India self-sufficient in food grains.

5. A section of people in India are still without food. Explain?

A section of people in India are still without food despite a large increase in the food grain production in the country. This is because of the increased price of commodities and people not being able to afford food to feed themselves and their families. Unemployment can also be a cause of this chronic hunger that poor people suffer in rural areas.

6. What happens to the supply of food when there is a disaster or calamity?

When there is a disaster or calamity the production and cultivation of food grains is highly affected. The production decreases and this causes a shortage of food grains and ultimately in the hiked prices of food grains. The region affected by calamity might also turn into a food-insecure state if the calamity lasts for a longer period of time.

Hunger is one of the most important aspects indicating food security. Hunger results in poverty and there are two dimensions of hunger, one is seasonal hunger and the other is chronic hunger.

The type of hunger that exists when a person is unable to get work for the entire year is called seasonal hunger. Seasonal hunger is related to cycles of food growing and harvesting. This is prevalent in rural areas because of the seasonal nature of agricultural activities and in urban areas because of casual labourers.

Chronic hunger is a consequence of diets persistently inadequate in terms of quantity and/or quality. Poor people suffer from chronic hunger because of their very low income and in turn inability to buy food even for survival.

8. What has our government done to provide food security to the poor? Discuss any two schemes launched by the government?

The government has launched various schemes for the welfare of the people and to provide food security to the poor. Two such schemes are Antyodaya Anna Yojana (AAY) and Annapurna Scheme (APS).

Antyodaya Anna Yojana (AAY) – Launched in the year 200, under this scheme one crore of the poorest among the below poverty line families covered under the targeted public distribution system were identified and 25kg of food grains were provided to each eligible family at a highly subsidised rate of Rs.2 per kg wheat and Rs.3 per kg of rice. The scheme was further expanded in the year 2003 and close to 50 lakh below poverty line families were provided with the food grains.

Annapurna Scheme (APS) – Launched in the year 2000, the scheme aims to provide food to the senior citizens who have remained uncovered under the National Old Age Pension Scheme. The eligibility for an applicant is that she or he should be 65 years or above in age.

9. Why buffer stock is created by the government?

A buffer stock of food grains is created by the government so that it can be distributed in the food deficit areas and among the poorer strata of the society at a price much lower than the market price. A buffer stock also helps to resolve the problem of food shortage during adverse weather conditions, disaster or calamity. Thus maintaining buffer stock is a step taken by the government in order to ensure food security.

(a) Minimum support price – The Food Corporation of India purchases wheat and rice from the farmers in states where there is surplus production. The farmers are paid a pre announced price for their crops. This price is called Minimum Support Price. Before the sowing season every year, the government announces the MSP and the purchased food grains are stored in granaries.

(b) Buffer stock – Buffer stock is the stock of food grains, mainly wheat and rice, procured by the Government through the Food Corporation of India. This buffer stock is used by the government in case of any calamity or disaster or for the poorer section of the society.

(c) Issue price – Food is kept in stocks in the form of the buffer stock to distribute foodgrains in the deficit areas and among the poorer strata of the society at a price lower than the market. This price is also known as Issue Price.

(d) Fair price shops – Ration shops also, known as Fair Price Shops, keep stock of foodgrains, sugar, and kerosene for cooking. These items are sold to people at a price lower than the market price. Any family with a ration card can buy a stipulated amount of these items every month from the nearby ration shop.

11. What are the problems of the functioning of ration shops?

Ration shops also, known as Fair Price Shops, keep stock of foodgrains, sugar, and kerosene for cooking. These items are sold to people at a price lower than the market price. However, there are problems of functioning of the ration shops:

12. Write a note on the role of cooperatives in providing food and related items.

Along with the government, cooperatives also play an important role in ensuring food security in India, especially in the southern and western parts of the country. The cooperative societies set up shops to sell low-priced goods to the poor. Out of all fair-price shops running in Tamil Nadu, around 94 per cent are being run by cooperatives. Mother Dairy, in Delhi, is involved in providing milk and vegetables at controlled rates decided by the government. Amul, responsible for the White Revolution in India, is a cooperative involved in providing milk and milk products. The Academy of Development Science (ADS) in Maharashtra has been involved in the setting up of Grain Banks in different regions. It organises training and capacity-building programmes on food security for NGOs. Its efforts are also directed towards influencing the government’s policy on food security. Thus, through these examples, it can be seen that cooperative are playing an active role in the distribution of food and related items.

Chapter 4 – Food Security in India of the Economics NCERT book class 9 will help students learn about food security in India. Food security of a nation is ensured if all of its citizens have enough nutritious food available, all persons have the capacity to buy food of acceptable quality and there is no barrier on access to food. Students will also study:

1. What is Food Security?

2. Why is Food Security needed?

3. Who are food insecure?