NCERT Solutions for Class 10 Maths Chapter 10- Circles Exercise 10.2 are researched and written by experienced faculty at BYJU’S. This exercise is prepared to help the students’ exam preparation and to improve their understanding of the topics.

These solutions cover problems on the number of tangents from a point on circles. This is a very important topic from the exam point of view. This solution covers mostly the long and descriptive types of questions that are often asked in the board examination. In order to practise questions on Number of Tangents from a Point on a Circle, students are advised to study this exercise solution thoroughly.

How it is helpful 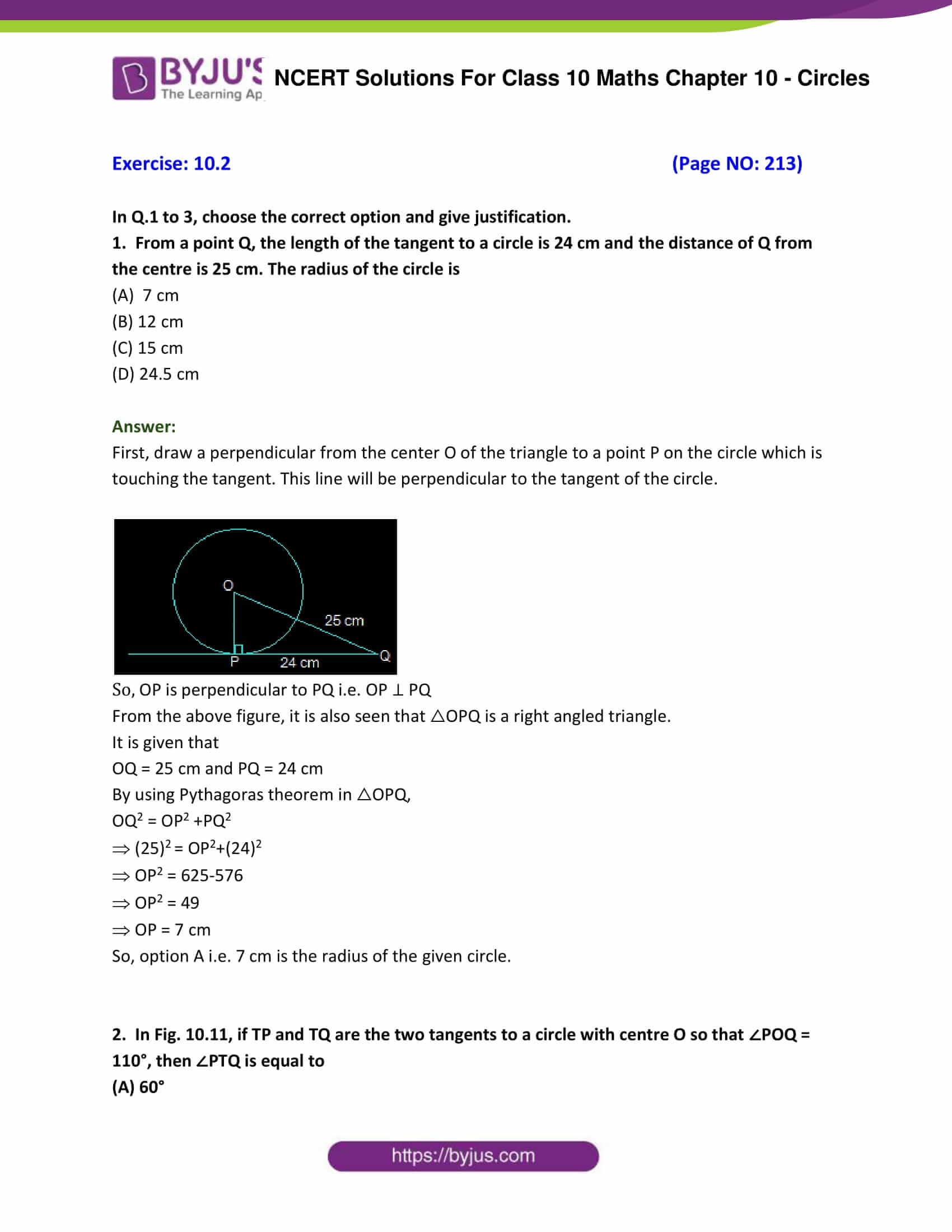 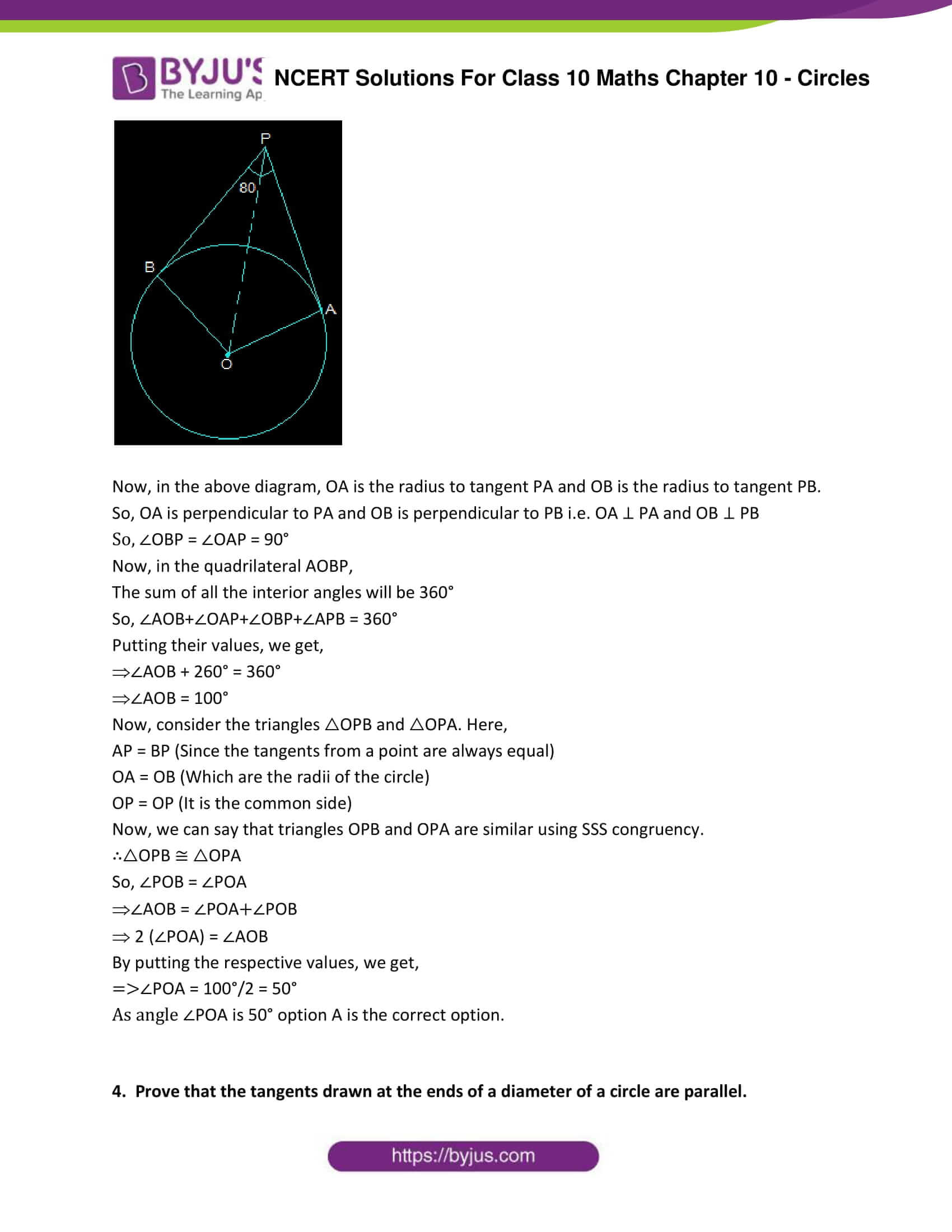 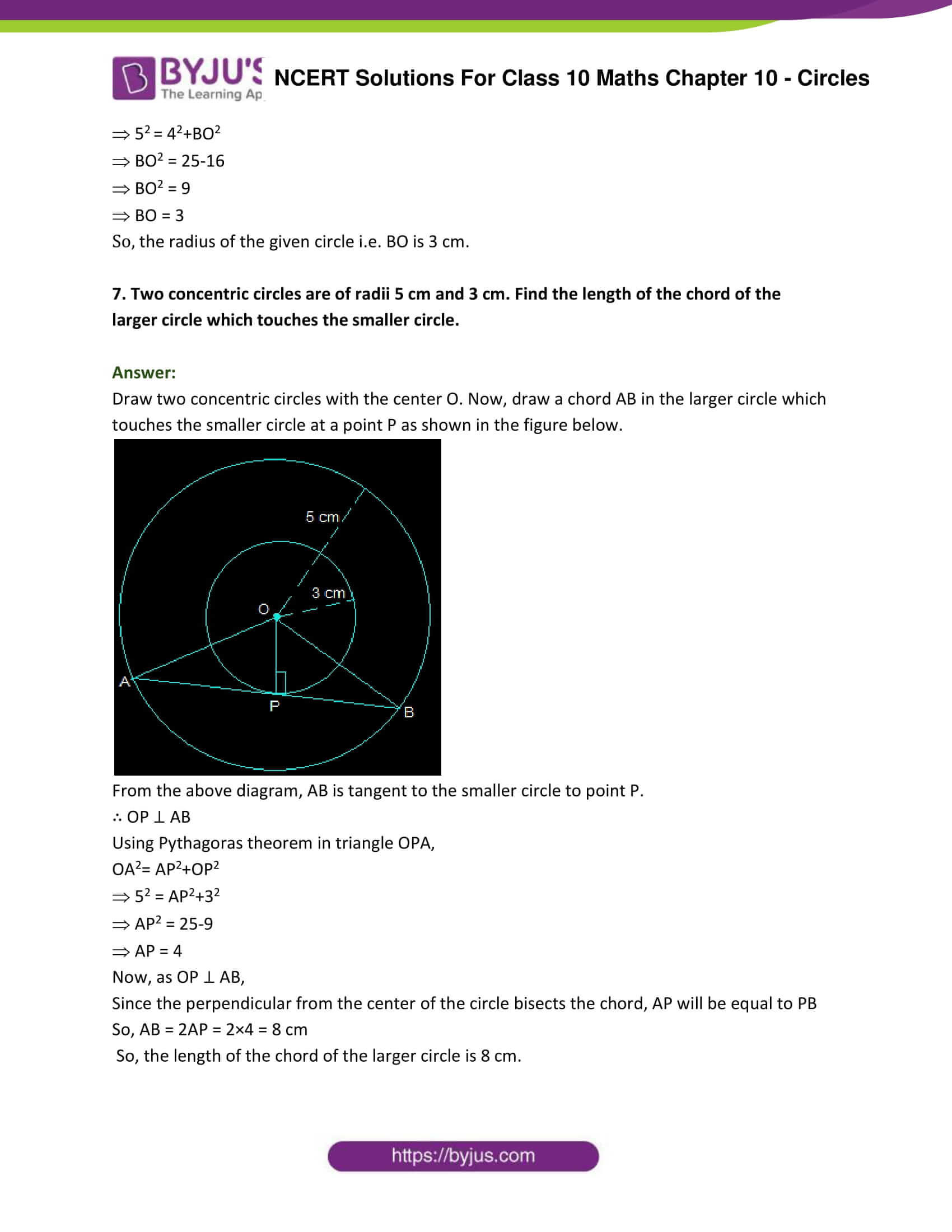 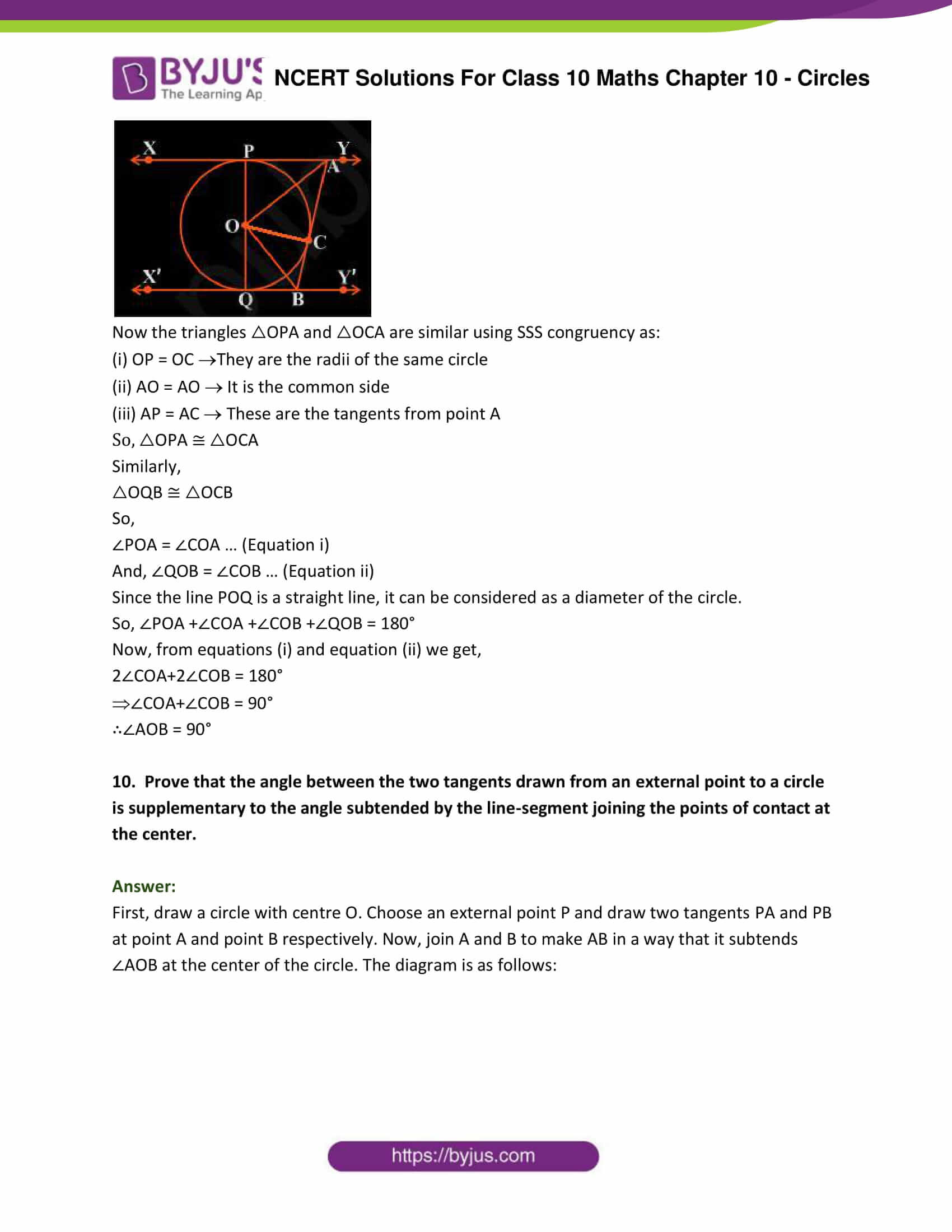 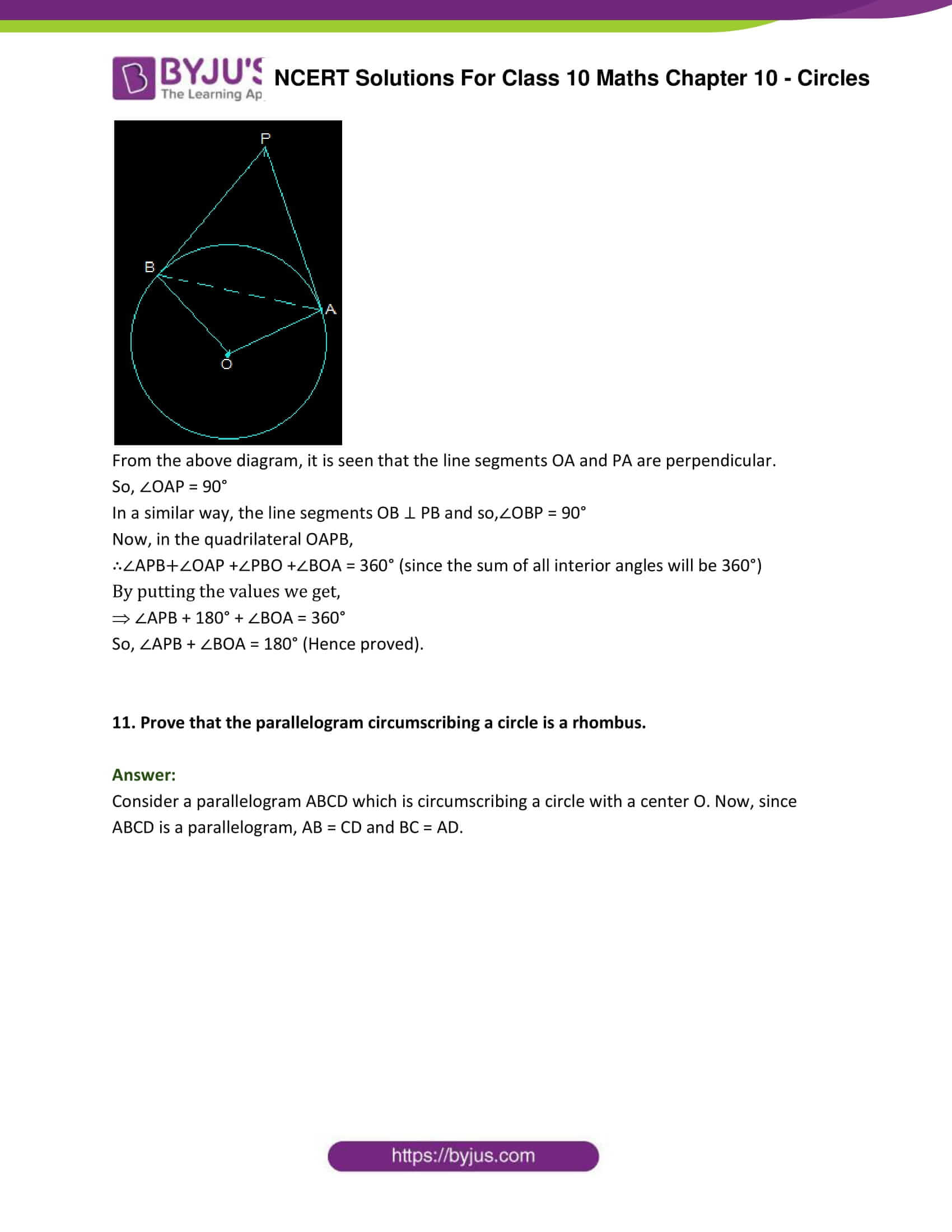 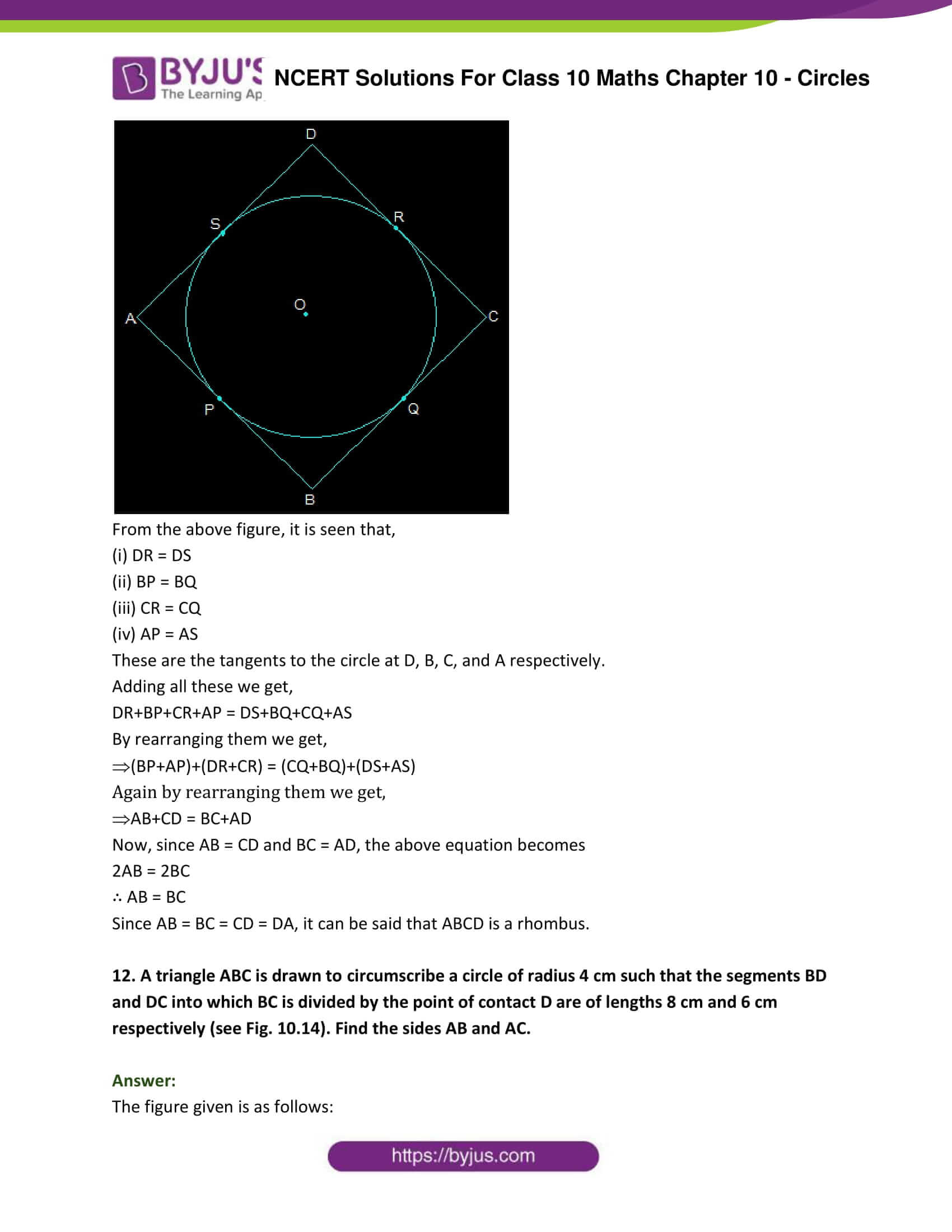 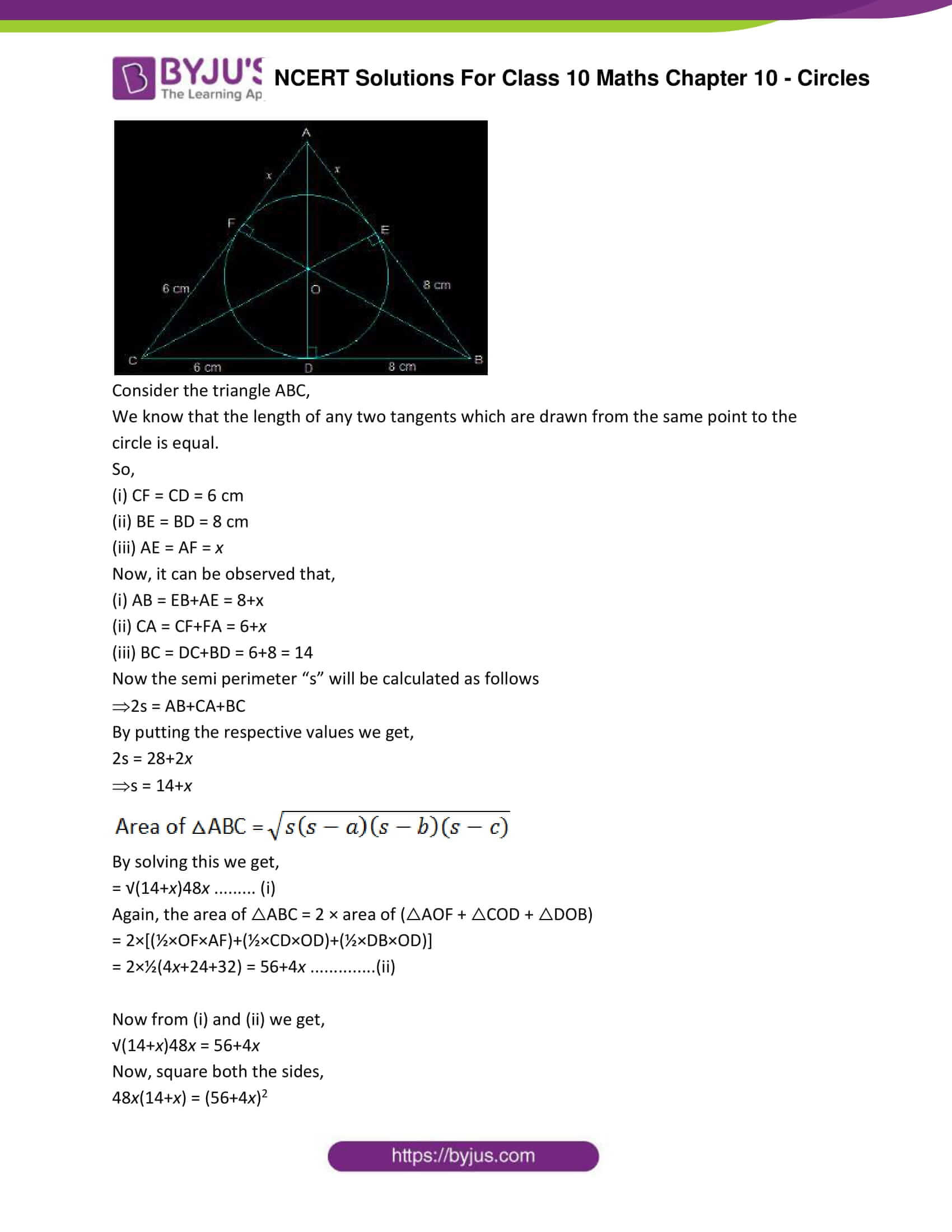 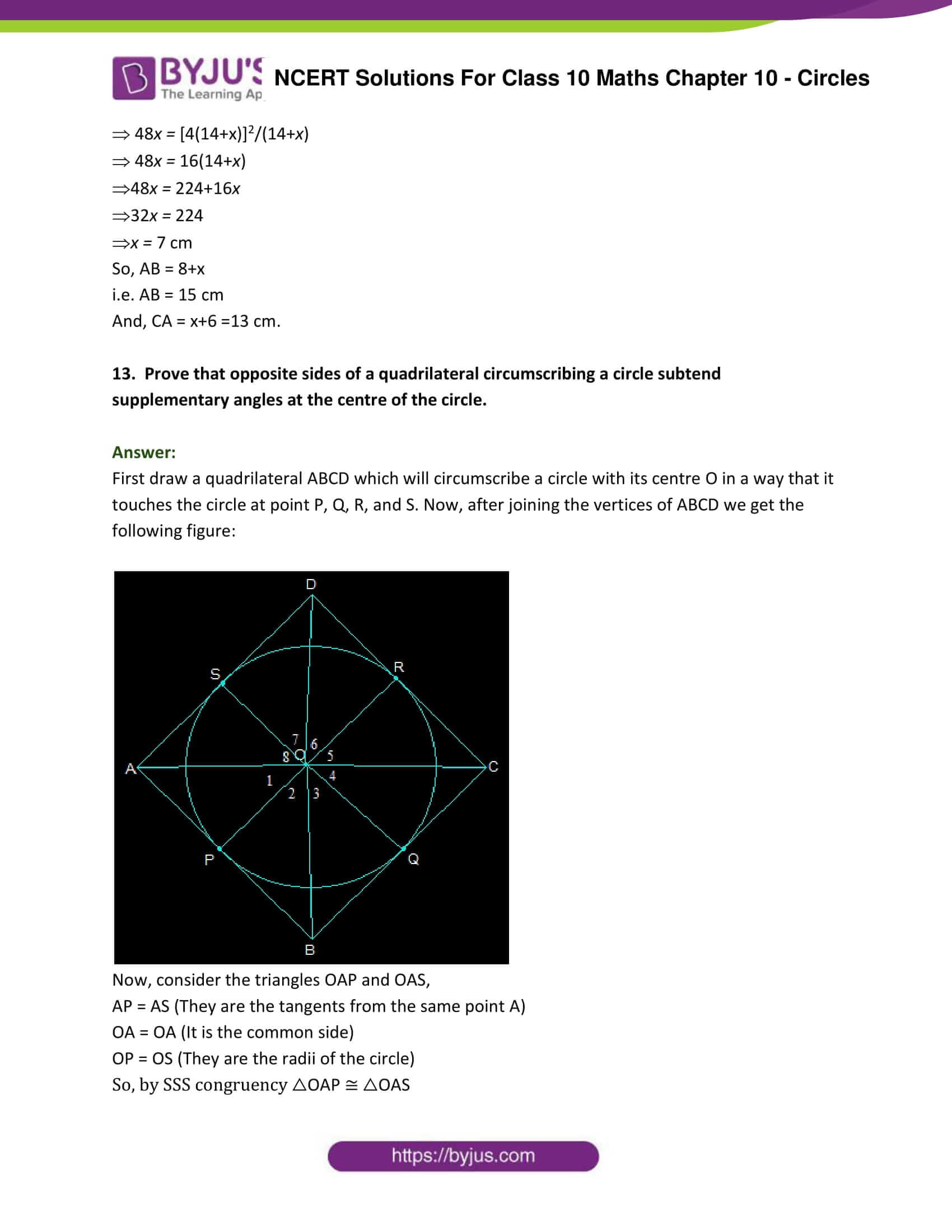 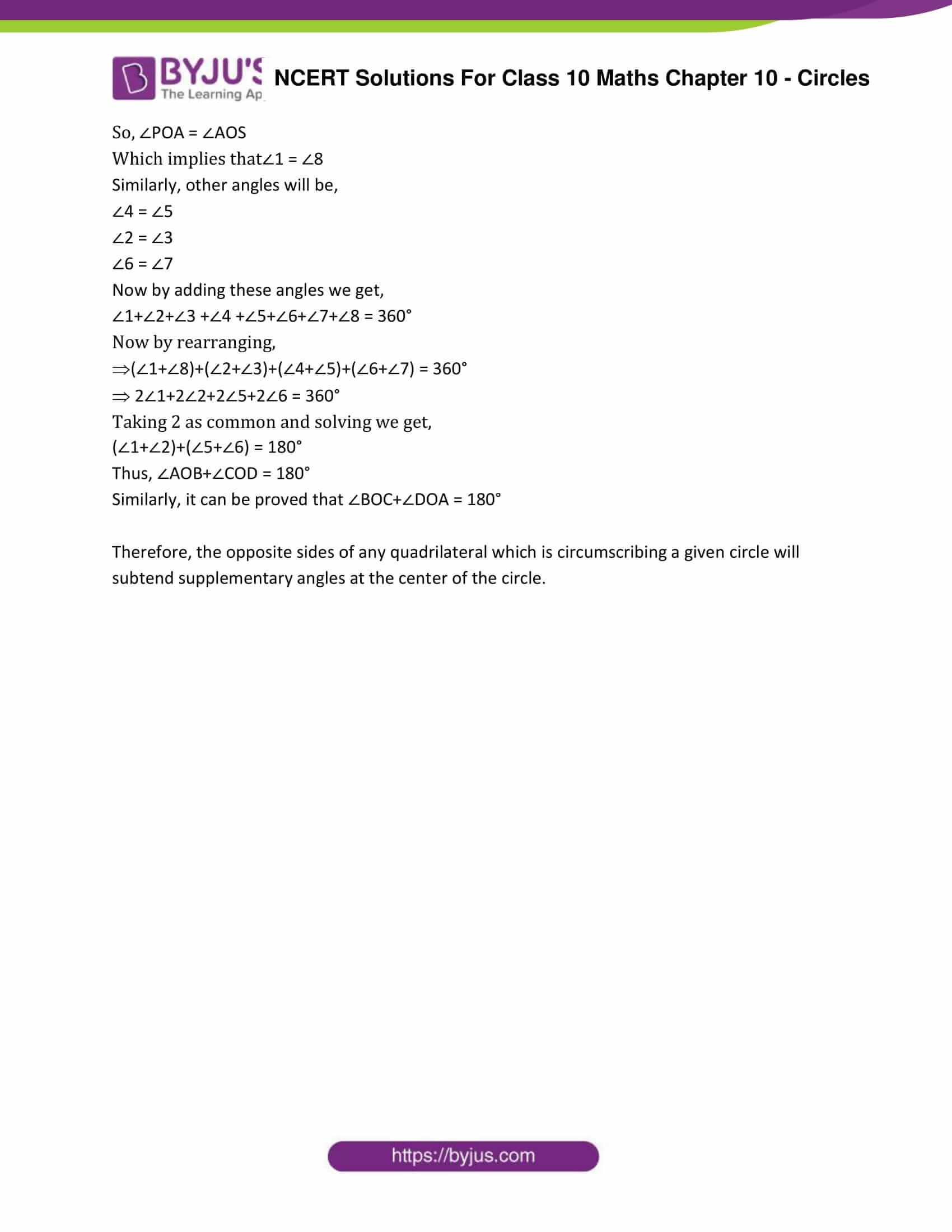 In Q.1 to 3, choose the correct option and give justification.

1. From a point Q, the length of the tangent to a circle is 24 cm and the distance of Q from the centre is 25 cm. The radius of the circle is

By using Pythagoras theorem in △OPQ, 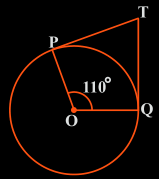 Now, in the quadrilateral POQT, we know that the sum of the interior angles is 360°

Now, by putting the respective values we get,

3. If tangents PA and PB from a point P to a circle with centre O are inclined to each other at angle of 80°, then ∠ POA is equal to

First, draw the diagram according to the given statement. 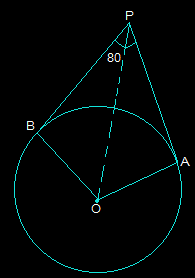 Now, in the quadrilateral AOBP,

The sum of all the interior angles will be 360°

Putting their values, we get,

AP = BP (Since the tangents from a point are always equal)

OA = OB (Which are the radii of the circle)

Now, we can say that triangles OPB and OPA are similar using SSS congruency.

By putting the respective values, we get,

As angle ∠POA is 50° option A is the correct option.

4. Prove that the tangents drawn at the ends of a diameter of a circle are parallel. 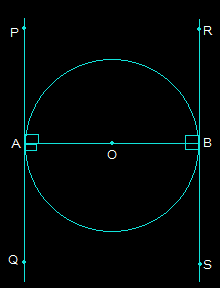 So, it can be said that line PQ and the line RS will be parallel to each other. (Hence Proved).

5. Prove that the perpendicular at the point of contact to the tangent to a circle passes through the center.

Let, O is the centre of the given circle.

A tangent PR has been drawn touching the circle at point P.

Draw QP ⊥ RP at point P, such that point Q lies on the circle.

Now, the above case is possible only when centre O lies on the line QP.

Hence, perpendicular at the point of contact to the tangent to a circle passes through the centre of the circle.

6. The length of a tangent from a point A at distance 5 cm from the centre of the circle is 4 cm. Find the radius of the circle.

Draw the diagram as shown below.

Here, AB is the tangent that is drawn on the circle from a point A.

So, the radius OB will be perpendicular to AB i.e. OB ⊥ AB

7. Two concentric circles are of radii 5 cm and 3 cm. Find the length of the chord of the larger circle which touches the smaller circle.

Draw two concentric circles with the center O. Now, draw a chord AB in the larger circle which touches the smaller circle at a point P as shown in the figure below. 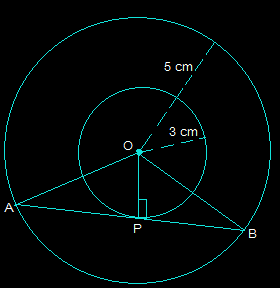 Since the perpendicular from the center of the circle bisects the chord, AP will be equal to PB

So, the length of the chord of the larger circle is 8 cm.

The figure given is: 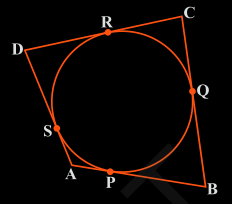 From this figure we can conclude a few points which are:

From the figure given in the textbook, join OC. Now, the diagram will be as- 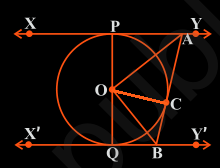 Now the triangles △OPA and △OCA are similar using SSS congruency as:

(i) OP = OC They are the radii of the same circle

(iii) AP = AC These are the tangents from point A

Since the line POQ is a straight line, it can be considered as a diameter of the circle.

Now, from equations (i) and equation (ii) we get,

10. Prove that the angle between the two tangents drawn from an external point to a circle is supplementary to the angle subtended by the line-segment joining the points of contact at the center.

First, draw a circle with centre O. Choose an external point P and draw two tangents PA and PB at point A and point B, respectively. Now, join A and B to make AB in a way that it subtends ∠AOB at the center of the circle. The diagram is as follows: 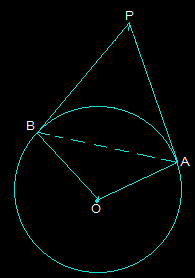 From the above diagram, it is seen that the line segments OA and PA are perpendicular.

Now, in the quadrilateral OAPB,

By putting the values we get,

11. Prove that the parallelogram circumscribing a circle is a rhombus. 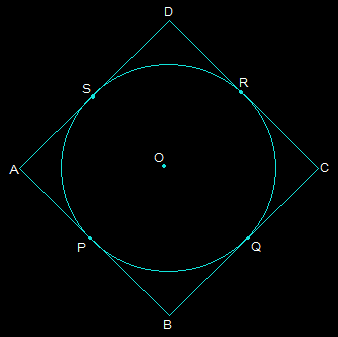 From the above figure, it is seen that,

These are the tangents to the circle at D, B, C, and A, respectively.

Adding all these we get,

Again by rearranging them we get,

Now, since AB = CD and BC = AD, the above equation becomes

12. A triangle ABC is drawn to circumscribe a circle of radius 4 cm such that the segments BD and DC into which BC is divided by the point of contact D are of lengths 8 cm and 6 cm, respectively (see Fig. 10.14). Find the sides AB and AC.

The figure given is as follows: 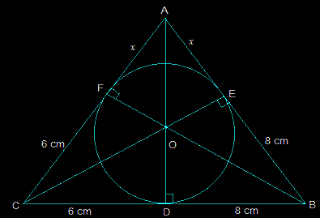 We know that the length of any two tangents which are drawn from the same point to the circle is equal.

Now, it can be observed that,

Now the semi perimeter “s” will be calculated as follows

By putting the respective values we get,

By solving this we get,

Now, square both the sides,

13. Prove that opposite sides of a quadrilateral circumscribing a circle subtend supplementary angles at the centre of the circle.

First draw a quadrilateral ABCD which will circumscribe a circle with its centre O in a way that it touches the circle at point P, Q, R, and S. Now, after joining the vertices of ABCD we get the following figure: 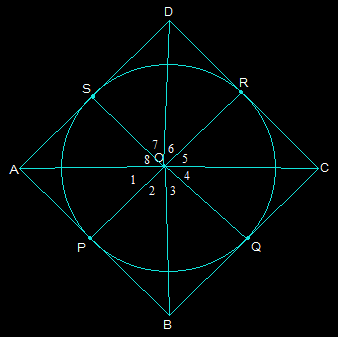 AP = AS (They are the tangents from the same point A)

OP = OS (They are the radii of the circle)

Similarly, other angles will be,

Now by adding these angles we get,

Taking 2 as common and solving we get,

Therefore, the opposite sides of any quadrilateral which is circumscribing a given circle will subtend supplementary angles at the center of the circle.