The natural motion of air, due to a current in a particular direction is called as wind.

To know more about “Movement of Air”, visit here.

Wind current is a current of air, sometimes of considerable force, moving generally horizontally from areas of high pressure to areas of low pressure.

Wind currents due to uneven heating of land and water

Rains are caused when winds from the oceans and seas flow towards land carrying moisture. The moisture in the clouds get saturated after a point and pour down as showers, which we call as monsoons.

To Know About Different Types Of Storms, Watch The Below Video: 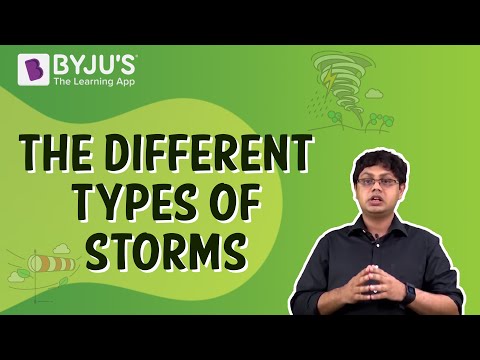 Thunderstorms develop in areas that are very hot and humid like India. The high temperatures create strong upward currents that carry water vapour to high altitudes where they condense and fall down again. Due to such drastic pressure variations, they are accompanied by lightning and strong winds.

Structure of a Cyclone

For More Information On Structure of a Cyclone, Watch The Below Video:

Cyclones are given different names in different parts of the world. They are called as hurricanes in the American continent and as typhoons in Japan.

The force due to earth’s rotation that tries to deflect winds towards left or right is known as Coriolis effect.

To know more about Thunderstorms and Cyclones, visit here.

Steps to follow if a storm is followed by lightning

To know more about Safety Measures during Thunderstorm and Lightning, visit here.

Measures of safety from tornados

To know more about Safety Measures and Role of Technology, visit here.

Name the different types of storms?

What are the effects of a cyclone?

What is a ‘Tornado’?

A violently rotating column of air touching the ground, usually attached to the base of a thunderstorm.