The Government of India has a Ministry of Human Resource Development. The Ministry was created in 1985 with an aim to improve people’s skills. This just shows how important people are as a resource for the country. Human resources, like other resources are not equally distributed over the world. They differ on a range of levels, such as their educational levels, age and sex. Their numbers and characteristics also keep changing. Students can learn more about Human Resources from Chapter 6 of CBSE Class 8 Geography. One of the best resources for the students to understand the concepts and revise thoroughly for the exam are CBSE Notes Class 8 Geography Chapter 6-Human Resources.

Revising the Chapter will ensure that the student will score well in the exam. Find below in this article, the link to download the CBSE Class 8 Notes from Chapter 6 of Geography.

People are a nation’s greatest resource. Nature’s bounty becomes significant only when people find it useful. It is people with their demands and abilities that turn them into ‘resources’. Hence, human resource is the ultimate resource.

The way in which people are spread across the earth’s surface is known as the pattern of population distribution. Over 90% of the world’s population lives in about 30% of the land surface. Distribution of population is uneven. Some areas are crowded and some areas are sparsely populated. The crowded areas are south and south-east Asia, Europe and northeastern North America. Very few people live in high latitude areas, tropical deserts, high mountains and areas of equatorial forests. Many more people live north of the Equator than south of the Equator. Almost three-quarters of the world’s people live in two continents, Asia and Africa. 60% of the world’s people stay in just 10 countries. All of them have more than 100 million people.

Topography: People prefer to live on plains rather than mountains and plateau as these areas are suitable for farming, manufacturing and service activities.

Examples: Densely populated fertile plains such as Ganga and Brahmaputra in India, Hwang-He, Chang Jiang in China and the Nile in Egypt.

Water: People prefer to live in areas where freshwater is easily available. River valleys of the world are densely populated while deserts have spare population.

Example: Diamond mines of South Africa and the discovery of oil in the Middle East lead to settling of people in these areas.

Examples: Osaka in Japan and Mumbai in India are two densely populated areas.

The population change refers to change in the number of people during a specific time. The world population is not stable. It has increased manifold due to changes in the number of births and deaths. Until the 1800s, the world’s population grew steadily but slowly. Large numbers of babies were born, but they died early too. Causes: no proper health facilities- no sufficient food available for all the people-farmers not able to produce enough to meet the food requirements of all the people. This resulted in a low increase in population. In 1804, the world population hit 1 bn and later about 155 years later in 1959, the population reached 3 billion-is also known as population explosion. Also, later in 1999, about 40 years later, the population doubled reaching 6 billion. The main reason for this growth: better food supplies and medicine, deaths were reduced, while the number of births still remained fairly high.

Births are usually measured using the birth rate i.e. the number of live births per 1,000 people. Deaths are usually measured using the death rate i.e. the number of deaths per 1,000 people. Migrations are the movement of people in and out of an area. Births and deaths are the natural causes of population change. Difference between the birth rate and the death rate of a country is called the natural growth rate. The population increase in the world is mainly due to a rapid increase in natural growth rate.

Another cause for population size change- Migration. People may move within a country or between countries. Emigrants are people who leave a country; Immigrants are those who arrive in a country. Countries like the United States of America and Australia have gained in-numbers by in-migration or immigration. Sudan is an example of a country that has experienced a loss in population numbers due to out-migration or emigration.

Economic development has little to do with how crowded a place is. Bangladesh and Japan-densely populated. But, Japan is more economically developed than Bangladesh. People vary in age, sex, literacy level, health condition, occupation and income level. Population composition refers to the structure of the population.

• The percentage of the total population, subdivided into males and females, in each of those groups.

The population pyramid of Kenya 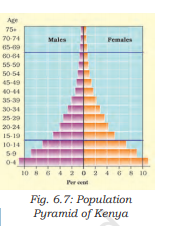 The population pyramid shown above for Kenya has birth and death rates both high, hence it is broad at the base and rapidly narrows towards the top. This is because although many children are born, a large percentage of them die in their infancy, relatively few become adults and there are very few old people. 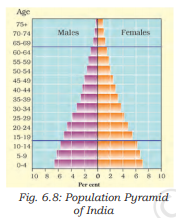 In countries like India where death rates (especially amongst the very young) are decreasing, the pyramid is broad in the younger age groups, because more infants survive to adulthood. This can be seen in the pyramid above for India. Such populations contain a relatively large number of young people and which means a strong and expanding labour force. 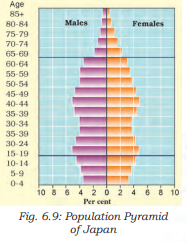 In countries like Japan, low birth rates make the pyramid narrow at the base. Decreased death rates allow numbers of people to reach old age. Skilled, spirited and hopeful young people endowed with a positive outlook are the future of any nation.

What is the meaning of ‘Human resource’?

The term human resources refers to the size of the population of a country along with its efficiency, educational qualities, productivity, organisational abilities and farsightedness.

What is ‘Economic development’?

Economic Development is programs, policies or activities that seek to improve the economic well-being and quality of life for a community.

What is ‘Population pyramid’?

The population pyramid represents the breakdown of the population by gender and age at a given point in time.