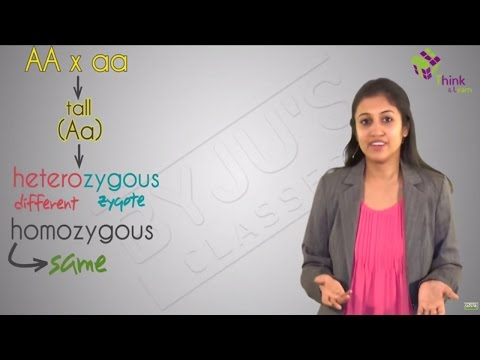 Heredity is the transfer of characteristics or the inheritance of traits from the parents to their offspring. A chromosome is a thread-like structure in the nucleus of a cell that carries the genetic materials. A gene is a small unit of DNA in the chromosomes responsible for a particular characteristic of an organism. The offspring developed may have similarities and dissimilarities with their parents. The differences in the traits of an offspring from the parents are known as variations. Genetic changes are the reason for these differences. We can acquire desired variations artificially, this is where hybridization comes into the play.

The process of crossing of genes or different genotype of two organisms is known as hybridization.

Let’s see how hybridization helps in variation with illustrations.

Now, we will cross these two plants, one with its alleles as “aa” and the other one with “AA” alleles. In this case, the hybridization will result in a plant with “Aa” gene. Here, the plant will be tall as the allele “A” dominant over the allele “a”.

This was Mendel’s experiment. Mendel in his first hybrid experiment took pea plants with tall and short characteristics and produced progeny from them. He observed the percentage of short plants and tall plants and found that all plants were tall.

The different possibilities of hybridization of different types of genes of plants can be explained by Punnett square. It is a simple table in which different types of gametes (sex cells with the given traits) of one parent is kept at one side of the table and those of the other are kept at the another side. Now the various possibilities are obtained and written inside the square blocks.

Heterozygous dominants are the one that have different alleles while homozygous are the one who have similar dominant alleles.  To know more about the hybridization of plants and about the Punnett square, watch the video.