NCERT Solutions for Class 12 Chemistry Chapter 14 Biomolecules are intended for students of Class 12 looking to write their Class 12 board exams. Class 12 Chemistry Chapter 14 deals with the topic of biomolecules and contains questions and solutions on topics such as saccharides, glycogen, cellulose, starch and more. Biomolecules solutions pdf provided here has answers to the textbook question along with other important questions, worksheets, MCQs, HOTS (Higher Order Thinking Skills) and exemplary questions prepared by experts at BYJU’S.

Biomolecules are the organic compounds present as essential constituents of the living organism in different cells. Biomolecules include carbohydrates, proteins, enzymes, vitamins and nucleic acids. To help students to get familiar with the topics we have provided a downloadable form of solutions for chapter 14 PDF. This PDF will help students to score good marks.

Life is made up of chemicals, living beings are constituted from chemicals known as biomolecules such as carbohydrates, vitamins, lipids, proteins and nucleic acids. These biomolecules interact with each other and constitute the molecular logic of life processes. In addition, some simple molecules like vitamins and mineral salts also play an important role in the functions of organisms. Structures and functions of some of these biomolecules are discussed NCERT Grade 12 Chemistry Chapter 14, Biomolecules.

After studying this chapter, students will be able to explain the characteristics of biomolecules like carbohydrates, proteins and nucleic acids and hormones; classify carbohydrates, proteins, nucleic acids and vitamins on the basis of their structures; explain the difference between DNA and RNA and describe the role of biomolecules in bio-system.

The NCERT Chemistry solutions for Class 12 chemistry has been designed in such a way that they enable students to effectively tackle chemistry questions. Using these solutions students can go ahead towards understanding difficult concepts and performing better in exams. They can use NCERT Solutions for Class 12 chemistry chapter 14 pdf for their reference and be well versed in all the topics before the exams. Students can perform well in the exams by going through and solving the NCERT solutions. The solutions which include important questions and sample papers will help students get a broader idea about the different types of questions along with their difficulty level as well as the marking scheme. Students can go through each question provided below carefully to get complete benefits of the Class 12 chemistry chapter biomolecules NCERT exercise question solution.

Q 1. What are monosaccharides?

Monosaccharides know as simple sugars comprise of one sugar unit that cannot be further broken down into simple sugars.

Q 2. What are reducing sugars?

Those type of carbohydrates which reduces the Fehling’s solution and Tollen’s reagent are termed as reducing sugars.

The two main functions of carbohydrate in a plant are:

(a) Polysaccharides like starch act as a storage molecule.

(b) Cellulose is used to build the cell wall, and it is a polysaccharide

Q 5. What do you understand by the term glycosidic linkage?

The linkage which forms by the loss of water between two monosaccharide units through an oxygen atom is known as glycosidic linkage.

For example, in a sucrose molecule, two monosaccharide units, -glucose and  – fructose, are joined together by a glycosidic linkage. Q 6. What is glycogen? How is it different from starch?

Glycogen also termed as animal starch is found only in animals. It is a polysaccharide.

Both Glycogen and starch are the main sources of glucose that provides energy to humans that are later converted into carbohydrates.

They differ in structure. Starch comprises of a chain and a branched compound whereas glycogen is composed of a single molecule and it is branched.

Q 7.  What are the hydrolysis products of (i) sucrose and (ii) lactose? 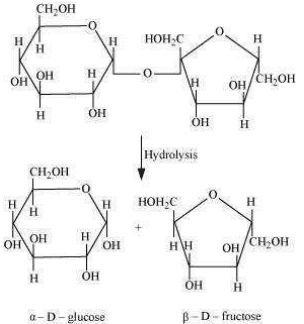 (b) On hydrolysis of lactose, it will give -D-galactose and -D-glucose. 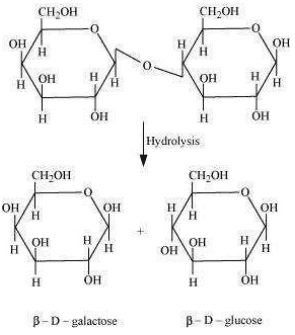 Q 8. What is the basic structural difference between starch and cellulose?

While, cellulose is a straight-chain polysaccharide of – D-glucose units joined by C1−C4 glycosidic linkage ( – link). 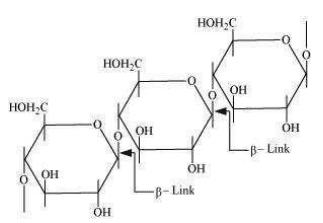 Q 9. What happens when D-glucose is treated with the following reagents?
(i) HI (ii) Bromine water (iii) HNO3

(a) After heating a D-glucose with HI for a long time, n-hexane is formed.

(b) After treating a D-glucose with water, D- gluconic acid is produced.

(c) After treating with , D – glucose get oxidised to give saccharic acid.

Q 10. Enumerate the reactions of D-glucose which cannot be explained by its open chain structure.

(i) The pentaacetate of glucose does not react with hydroxylamine. This shows that a free −CHO group is not present in glucose.

(ii) Aldehydes form the hydrogen sulphite additional product by giving 2,4 – DNP test, Schiff’s test and react with . But glucose does not undergo these reactions.

Q 11. What are essential and non-essential amino acids? Give two examples of each type.

Those amino acids which are required by the human body are called essential amino acids, but these cannot be produced inside the human body. They must be taken from any external source like food. As for example leucine and valine.

Those acids which are required by the human body but these type of acids can be produced inside the body are called non – essential amino acids. Example: glycine and alanine.

We can refer to the specific sequence, in which various amino acids are present if we talk about the primary structure of the protein. Like the sequence of linkage between amino acid in a polypeptide chain.

The amino acids are arranged in a different sequence in each of the proteins. A little difference in the sequence of the arrangements will create a completely different protein. 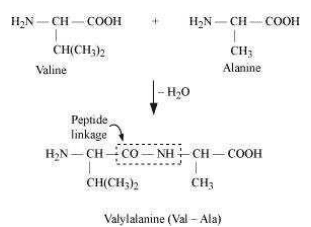 This result in the unfolding of the globules ad uncoils the helix.  And the consequences of this change are that the protein results in the loss of its biological activity. This loss of biological activity by the protein is called denaturation.  During this process, no changes are encountered in primary structure whereas tertiary and secondary structures will be destroyed.

Example for denaturation, proteins is the coagulation of egg white when an egg is boiled.

Q 13. What are the common types of secondary structure of proteins?

Secondary structures of proteins are of two types:

In this structure, the −NH group of an amino acid residue forms H-bond with the

Group of the adjacent turn of the right – handed screw ( – helix ). 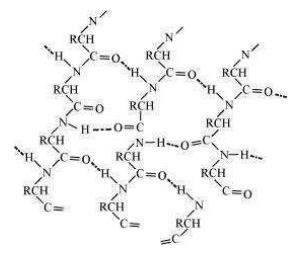 Q 14. What type of bonding helps in stabilising the α-helix structure of proteins?

Group of the adjacent turns of the  -helix help in stabilising the helix.

Q 16. How do you explain the amphoteric behaviour of amino acids?

In the presence of water or aqueous solution, the carboxyl group of an amino acid can lose a proton and the amino group can accept a proton to give a dipolar ion known as zwitterion.

Therefore, the amino acid can act both as an acid and as a base, in the presence of zwitterionic form.

The protein that catalyses the biological reactions are called enzymes. They are very particular in nature and for some specific substrate, they catalyse particular reactions.

Example: Maltase is the enzymes which are used to catalyse the hydrolysis of maltose into glucose.

Also, oxidoreductase enzymes are those which are used to catalyse the oxidation of one substrate with the simultaneous reaction of another substrate.

Q 18.  What is the effect of denaturation on the structure of proteins?

Q 19. How are vitamins classified? Name the vitamin responsible for the coagulation of blood.

We can classify vitamins on the basis of solubility in water or fat into two categories.

(a) Water-Soluble vitamins: Vitamins which are soluble in water comes in the category.

For example, B group vitamins ()  and vitamin C.

(b) Fat-soluble vitamins:  Those vitamins which are soluble only in fat, not in water come under this group. For example Vitamins A, D  E, and K

However, biotin or vitamin H is neither soluble in water nor in fat.

The vitamin which is responsible for coagulation of blood is Vitamin K.

Q 20. Why are vitamin A and vitamin C essential to us? Give their important sources.

The sources of these two vitamins are:

Q 21. What are nucleic acids? Mention their two important functions.

Nucleic acids are long-chain polymers of nucleotides, so they are also known as polynucleotides.

(i) It is responsible for heredity. In heredity, there is a transfer of inherent characters from one generation to another.  And this process is held by the DNA.

(ii) The protein cell synthesis is held by the Nucleic acid (both RNA and DNA). The protein synthesis is majorly done by the various RNA molecules in a cell while DNA contains the message for the synthesis of a specific protein.

Q 22.  What is the difference between a nucleoside and a nucleotide?

A Nucleotide is formed by the combination of all the three basic components of nucleic acids (i.e., base, a pentose sugar, and phosphoric acid). 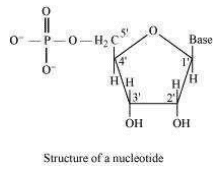 On the other hand, A nucleoside is formed by the attachment of a base to 1’ position of the sugar.

Q 23. The two strands in DNA are not identical but are complementary. Explain.

Q 24. Write the important structural and functional differences between DNA and RNA.

The difference on the basis of their functions is:

The differences on the basis of their structures are as follows:

What are the different types of RNA found in the cell?

BYJU’S NCERT solutions for chemistry covers all the chapters in general. So students can benefit from not just one but many other NCERT Solutions for Class 12 chemistry. Students also get an additional advantage as they can learn NCERT or CBSE based Class 12 chemistry chapters and topics within their comfort zone. They can access the materials right from their homes or from anywhere. Students can also download and use our free learning app. BYJU’S also provides experienced subject experts who can clarify most of the doubts of the students while guiding them to learn the subject and its concepts in a more structured manner.

In case, if a student faces problems while referring NCERT Class 12 chemistry solutions, they can approach the BYJU’S support team to clear all their doubts. Apart from chemistry, students can also submit all their queries regarding other subjects including physics, maths and biology. And that is not just it. BYJU’S also keeps track of all the progress that student’s make. Feedbacks are provided at regular intervals.