Polymers are high molecular mass substances consisting of a very large number of simple repeating structural units joined together through covalent bonds in a regular fashion. Chapter 15 Polymers has been solved by expert teachers as per CBSE textbook guidelines. Students studying in Class 12 have the pressure of scoring good marks in the board examination. To score good marks in the board examination one must solve the NCERT Class 12 chemistry question papers.

Classification of Polymers based on Molecular Forces:

Elastomers, Fibres, Thermoplastic And Thermosetting. Types of polymerization. The molecular mass of polymers. Biodegradable polymers. Two Greek words combine to form a term ‘polymer’. In Greek, ‘poly’ means many and ‘mers’ means part or unit. It is also referred to as macromolecules. Examples of polymers are Butadiene, Buna – N etc. Homo-polymers and Copolymers are two types of polymers which are based on their repeating structural unit. A chemical process to produce a chain-like structure or network of molecules called polymer by combining monomers is called polymerization.

There are two types of polymerization reactions:

This was the introduction to the chapter 15th of chemistry class 12. Along with NCERT sample questions, one must solve previous year questions and participate in a mock test.

Polymers can be defined as a huge molecular mass macro-molecules made of repeating monomer-derived structural units. Polymers consists of a huge molecular mass of (). Numerous units of monomers are combined together in one polymer by covalent bonds. The polymers either be both natural and synthetic. Examples of polymers include rubber, polythene, nylon 6, 6. Simple and reactive molecules, called monomers, fuse together in large groups by covalent bonds to produce polymers.

Q2: What are natural and synthetic polymers? Give two examples of each type.

Q4: How do you explain the functionality of a monomer?

The functional of a monomer may be defined as the total number of retaining sites, which are in this particular monomer.

For example, adipic acid and 1, 3-butadiene is two and that of propene and ethene is one

The mechanism of high molecular mass formation () macro-molecules, consisting of repeated structural units formed from monomers is known as polymerization. There are several monomer units in a polymer that are joined by tight covalent bonds.

is a homo-polymer, the reason being that it is derived from a single monomer unit, .

Q7: Determine the groups where the polymers are graded according to molecular forces?

Polymers are classified into groups given below based on the intermolecular magnitude of forces present in polymers:

Q8: How can you differentiate between addition and condensation polymerisation?

Condensation Polymerisation: The process in which the polymers are formed by the repeating condensation reactions between the two different bifunctional or trifunctional monomers. In this process molecules such as hydrochloric acid or water is eliminated.

For example, nylon 6, 6 is the result of adipic acid and hexamethylenediamine polymerization of the reaction condensation.

Addition Polymerisation: The process in which, the monomers having double or triple bonds are added repeatedly to form polymers.

For example, Addition polymerization of ethene leads to the formation of Polyethene.

Q9: Explain the term copolymerisation and give two examples.

Co-polymerisation is the mechanism by which polymers are formed from two or more monomeric units. In a copolymer, there are multiple units of every monomer. Example of copolymerization is the process of forming polymer Buna-S from 1, 3-butadiene and styrene.

The formation of copolymer Nylon 6, 6 is from adipic acid and hexamethylenediamine.

Q10: Write the free radical mechanism for the polymerisation of ethene.

Ethene polymerization into polythene consists of exposing or heating as the initiator a mixture of ethene with a small amount of benzoyl peroxide to light. 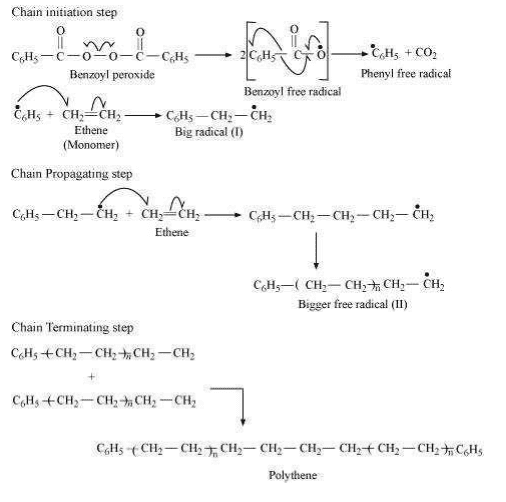 Q 11: Define thermoplastics and thermosetting polymers with two examples of each.

Q 13: Write the name and structure of one of the common initiators used in free radical addition polymerisation.

Benzoyl peroxide is one of the common initiator’s name and structure used in free radical polymerization.

Q 14: How does the presence of double bonds in rubber molecules influence their structure and reactivity?

Natural rubber is a linear cis-polyisoprene consisting of double bonds between the two units of isoprene  .

Intermolecular interactions between the different isoprene strands are relatively weak because of this cis-configuration. On account of this different natural rubber, strands are arranged randomly. So it’s showing elasticity.

Q 15: Discuss the main purpose of vulcanisation of rubber.

During this process, a mixture of raw rubber with sulphur and a suitable additive is heated to a temperature range of between 373 K and 415 K.

Q 16: What are the monomeric repeating units of Nylon-6 and Nylon-6,6?

Q 17: Write the names and structures of the monomers of the following polymers:
(i) Buna-S (ii) Buna-N (iii) Dacron (iv) Neoprene 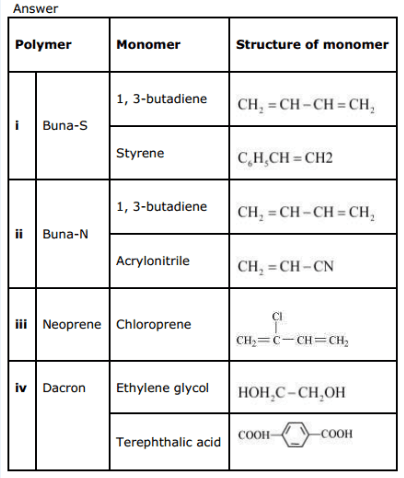 Q 18: Identify the monomer in the following polymeric structures. 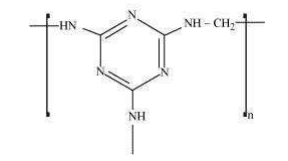 (i) Hexamethylene diamine is the monomer of the given polymeric structure

and decanoic acid
.
(ii) The monomers of the polymeric structure given are:

Q 19: How is dacron obtained from ethylene glycol and terephthalic acid ?

Dacron is formed by the condensation polymerisation of terephthalic acid and ethylene glycol. 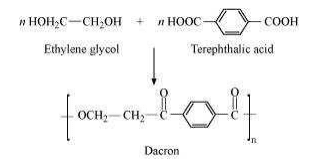 A polymer which bacteria can decompose is called a Biodegradable Polymer. Poly-β-hydroxybutyrate-CO-β-hydroxyvalerate (PHBV) an example of an aliphatic biodegradable polyester.

BYJU’S gives you polymers Class 12 important questions, polymer pdf book, polymers Class 12 videos, animations, lecture notes on polymers and the assignments that will help you immensely in your Class 12 and entrance exam preparation.