NCERT Solutions for Class 9 History Chapter 2 is designed completely based on the syllabus and guidelines of the latest CBSE Term II exams. The French Revolution created new possibilities and dramatically brought changes to equality, fraternity and liberty in Europe. However, not everyone was in favour of this change in society, which give rise to factions like liberals, radicals and conservatives.

Get the best NCERT Solutions to Class 9 History and perform well in your History exams. Chapter 2 – Socialism in Europe and the Russian Revolution covers topics such as Nazism, French Revolution, Colonialism and Social Revolution. These solutions are prepared by our subject-matter experts, giving you accurate answers to questions provided in the NCERT textbook of Class 9 History.

Chapter 2 Socialism In Europe And The Russian Revolution 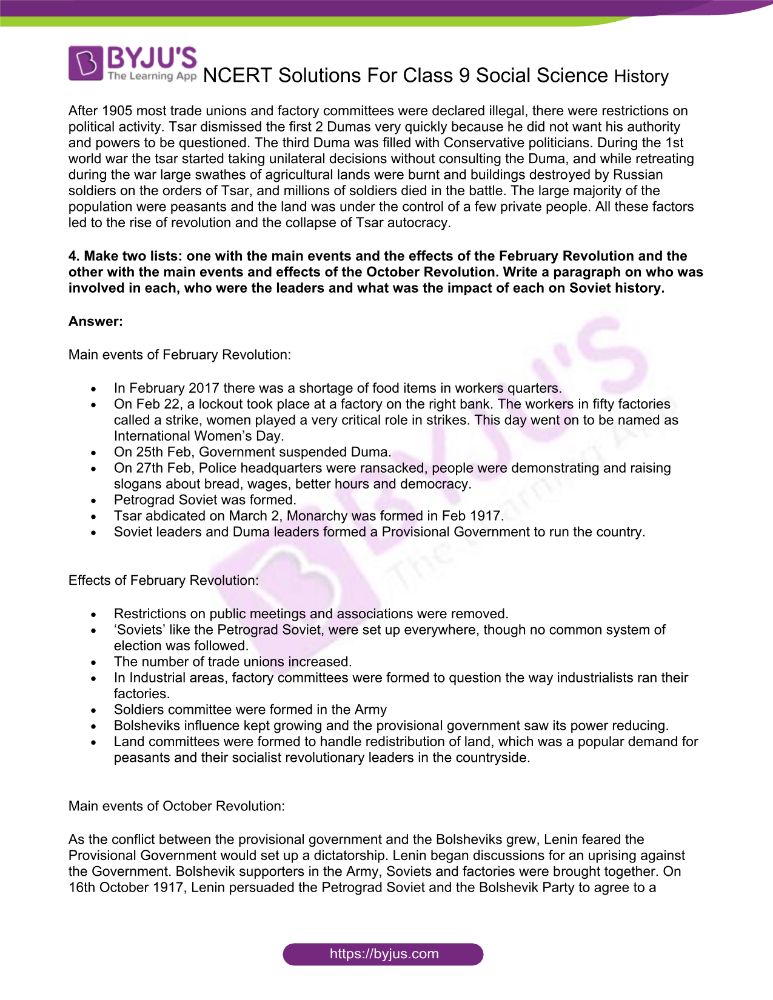 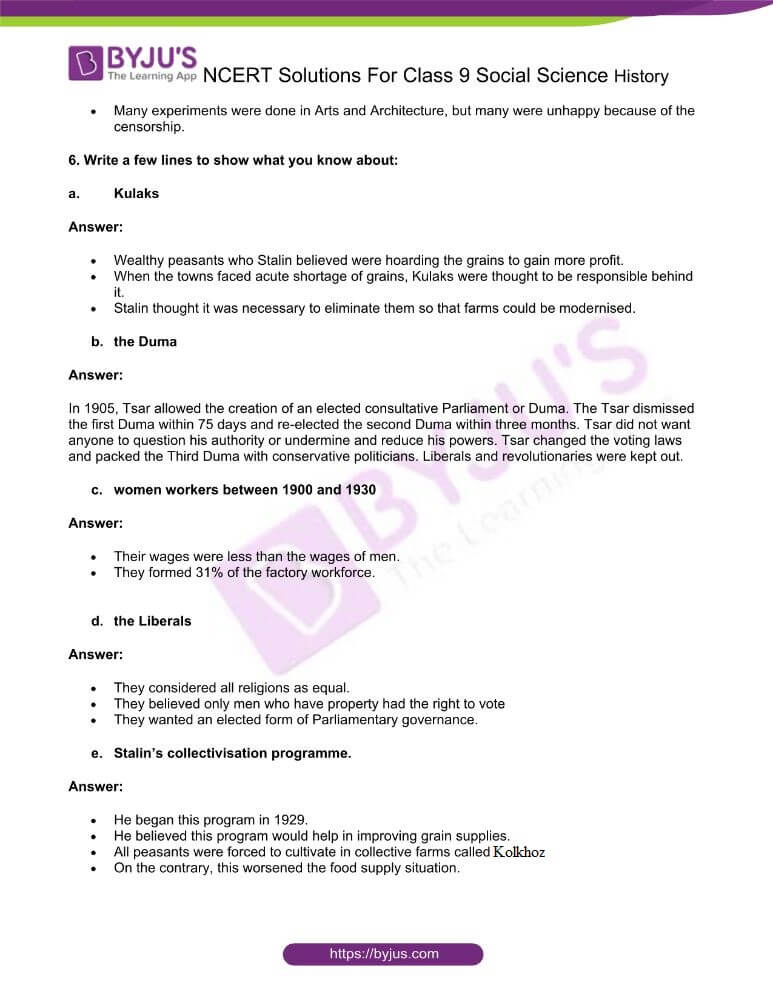 The Solutions for Chapter 2 of India and the Contemporary World-I are given below. Students should also check NCERT Solutions for Class 9 for other subjects.

1. What were the social, economic and political conditions in Russia before

Workers were a divided group. Some had strong links with the villages; others had settled permanently in cities. Workers were divided based on their skills. The division among workers reflected in their dress and manners too.

Russia was an autocracy. Unlike other European countries, The Tsar was not subject to a Parliament. Liberals in Russia campaigned to end this state of affairs.

1905 was the year when the incident of ‘Bloody Sunday’ took place. 100 workers were killed, and about 300 were wounded. Bloody Sunday started a series of events that became known as the 1905 revolution.

2. In what ways was the working population in Russia different from other countries in Europe, before 1917?

The vast majority of Russia’s population were agriculturists. About 85 per cent of Russian empires population earned their living from Agriculture. This proportion was higher than in most European countries. In France and Germany, the proportion was between 40 per cent and 50 per cent. Cultivators produced for the market as well as for their own needs and Russia was a major exporter of grain.

3. Why did the Tsarist autocracy collapse in 1917?

After 1905, most trade unions and factory committees were declared illegal. There were restrictions on political activity. The Tsar dismissed the first 2 Dumas very quickly because he did not want his authority and powers to be questioned. The third Duma was filled with Conservative politicians. During the 1st world war, the tsar started taking unilateral decisions without consulting the Duma. While Russian soldiers were retreating from the war, large swathes of agricultural lands were burnt and buildings destroyed by them on the orders of Tsar. Millions of soldiers have also died in the battle. The large majority of the population were peasants, and the land was under the control of a few private people. All these factors led to the rise of revolution and the collapse of Tsar autocracy.

Effects of the February Revolution:

Main events of the October Revolution:

As the conflict between the provisional government and the Bolsheviks grew, Lenin feared the Provisional Government would set up a dictatorship. Lenin began discussions for an uprising against the government. Bolshevik supporters in the Army, Soviets and factories were brought together. On 16th October 1917, Lenin persuaded the Petrograd Soviet and the Bolshevik Party to agree to a socialist seizure of power. A military revolutionary committee was appointed by the Soviet under Leon Trotsky to organize the seizure. The uprising began on 24th October 1917. Military men who were loyal to the government seized the buildings of two Bolshevik newspapers. Pro-Government troops were sent to take over telephone and telegraph offices and protect the Winter Palace. In retaliation, the Military Revolutionary Committee ordered its supporters to seize government offices and arrest ministers. A ship named Aurora bombed the Winter Palace, other ships sailed down the Neva and took over various military positions. By the end of the month, the city was under the control of committee and ministers had resigned. By December, Bolsheviks controlled the Moscow-Petrograd area.

Effects of the October Revolution.

5. What were the main changes brought about by the Bolsheviks immediately after the October Revolution?

6. Write a few lines to show what you know about:

In 1905, Tsar allowed the creation of an elected consultative Parliament or Duma. The Tsar dismissed the first Duma within 75 days and re-elected the second Duma within three months. The Tsar did not want anyone to question his authority or undermine and reduce his powers. The Tsar changed the voting laws and packed the Third Duma with conservative politicians. Liberals and revolutionaries were kept out.

Socialism in Europe and the Russian Revolution Summary

Chapter 1 of NCERT Social Science History textbook – Indian and the Contemporary World-I is titled as ‘ Socialism in Europe and the Russian Revolution.’ Some of the important political traditions of the nineteenth century and how they influenced change in European society will be discussed. Through the revolution in Russia, socialism became one of the most significant and powerful ideas to shape society in the twentieth century.

1. The Age of Social Change

3. The February Revolution in Petrograd

4. What Changed after October?

5. The Global Influence of the Russian Revolution and the USSR

What are the main topics that students will learn in Chapter 2 of NCERT Solutions for Class 9 History?


How can I download the NCERT Solutions for Class 9 History Chapter 2 PDF online?

You can download the NCERT Solutions for Class 9 History Chapter 2 PDF from the links provided at BYJU’S website. Students only need to register themselves with BYJU’S to download the solutions PDF for free. All the solutions are created by expert tutors having vast experience in their respective subject following the latest CBSE guidelines. Students wishing to obtain a better idea of answering the textbook questions can refer to the solutions PDF. Further, all the solutions are written in a simple and understandable language to help students learn with ease and perform well in their Class 9 CBSE Term II exams.

Why should students opt the BYJU’S NCERT Solutions for Class 9 History Chapter 2 for reference?

Students should opt the BYJU’S NCERT Solutions for Class 9 History Chapter 2 as it’s handy and easy to comprehend. Moreover, the solutions can be viewed online and downloaded in PDF for offline use by the students at no cost and without any time constraints. All the solutions are curated by subject experts at BYJU’S using simple language for the ease of learning. Neat explanations in paragraphs and using bulletins in the solutions help students learn answer presentation skills vital for exams.