According to the Revised term-wise CBSE Syllabus 2022-23, this chapter has been removed.

Nomads are people who do not live in one place but move from one area to another to earn their living. In the modern scenario, we still come across nomads and nomadic communities around the world who have no permanent houses. Among all the nomads there is one such typed called pastoral nomads who are cattle herders and roam around in search for pastures for their cattle. Practising the questions mentioned in Chapter 5 – Pastoralists in the Modern World will help the students to analyze their level of preparation and the understanding of concepts. The NCERT Solutions for Class 9 History to these questions present in the textbooks can help students to clear their doubts easily.

Chapter 5 Pastoralists In The Modern World 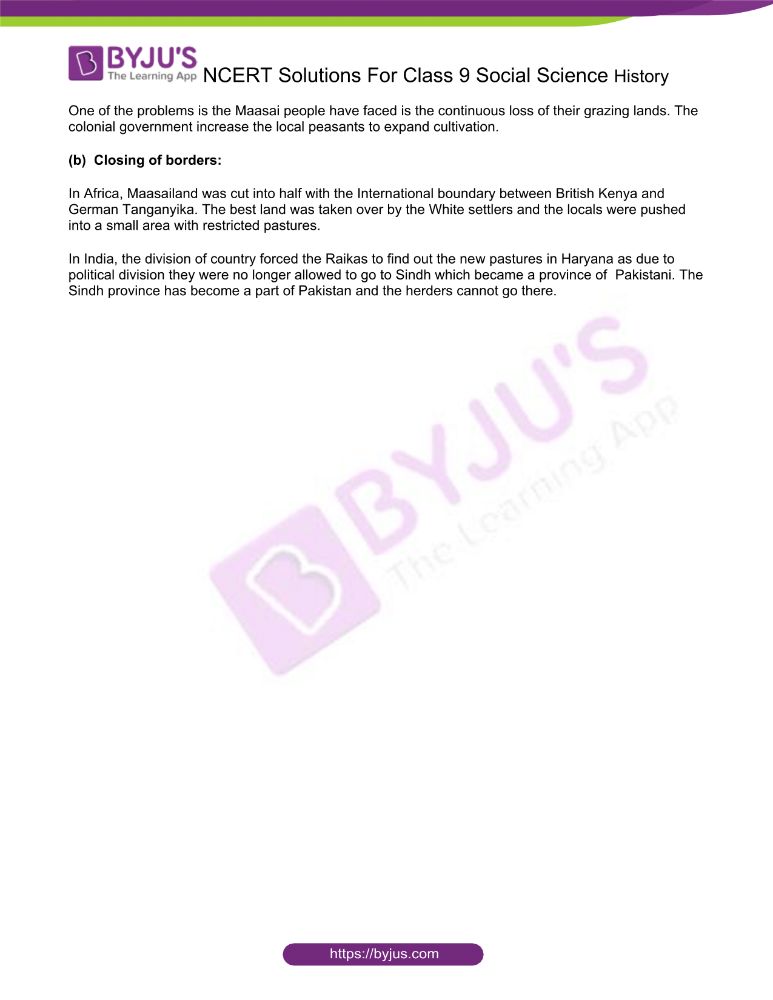 The solutions for Chapter 5, Pastoralists in the Modern World are given below. Students should also check NCERT Solutions for Class 9 for other subjects.

Q.1 Explain why nomadic tribes need to move from one place to another. What are the advantages to the environment of this continuous movement?

Solution: Nomadic tribes move from one location in order to maintain their sustenance and way of lie. As they are involved in animal husbandry, the availability of water is paramount to their existence along with fresh pastures for their animals. When the pasture is depleted they move to next area looking for new grazing grounds.

The advantages of the environment are as follows:

(I) The environment gets a chance to regrow and recover, thus maintaining the ecological balance of the area.

(II) It prevents overgrazing as this will lead to depletion of future grazing grounds.

(III) The manure of the animals helps in fertilising the soil, which will be instrumental in repeating the nomadic process of moving from one location to another a possibility.

Q.2 Discuss why the colonial Government in India brought in the following laws. In each case explain how the law changed the lives of the pastoralists.

Solution: a. Wasteland rules: The colonial government considered all uncultivated lands or wastelands as unproductive as it neither generated revenue or agricultural produce. In order to bring these ‘wasteland’ under cultivation, the Waste Land Rules were enacted throughout India from the mid-nineteenth century. These lands were given to select individuals with various concessions and encouraged to settle them. Most of these lands were earlier used by pastoralists for grazing. So the expansion of cultivation meant that there was a decline in the number of pastures and a problem for pastoralists.

b. Forest Acts: Various forest acts were enacted in order to produce commercially viable timber like deodar or sal. Some tracts of forests were declared ‘Reserved’ which meant pastoralists were denied access to these forests. Those that were classified as ‘Protected’, pastoralists had some customary grazing rights but their movements were restricted severely.

These laws were enacted as the colonial authorities believed that grazing destroyed roots and depleted the fertility of the forests. It affected the pastoralists in the sense that their movements were restricted with specific timings to control how much time they spent in the forests. One can safely say their lives were ruled by the permits of the forest departments.

C. Criminal Tribes Act: The British authorities regarded nomadic people with suspicion and contempt. Nomadic tribes were moved from one place to another in search of grazing grounds. This made it difficult for them to control and identify such people. While on the other hand, they saw the settled people as peaceful and law-abiding.

Thus in order to bring nomadic and pastoralist people under their control, the British passed the Criminal Tribes Act in 1871. Through this act, communities of craftsmen, traders and pastoralists were classified as criminals by birth and nature.

They were forced to settle in one location and could not move without a permit. The village police kept a close watch on them as a result.

d. Grazing Tax: In order to increase its revenue, the colonial government imposed a tax on land, salt, canal water, and also animals. Pastoralists had to pay a tax on every animal they took to grazing in the pastures.

The Grazing Tax was introduced in India by the mid-nineteenth century. In the 1850s, the right to collect these taxes were auctioned off to contractors. The contractors on their part tried to extract as much tax as possible in order to recover the money they paid to the government. In order to pay less, the pastoralists had to decrease the number of animals they took for grazing.

Q.3 Give reasons to explain why the Maasai community lost their grazing lands.

Solution: In the late nineteenth century, in what would be knowns as the ‘scramble for Africa’, European imperial powers slicing up the region into different colonies with little to no regard about the local sentiments. In 1885, the land of the Maasai, Maasailand, was cut into half with an international boundary between British Kenya and German Tanzania. As a result, the best grazing lands were reserved for white settlers with Maasai being pushed into a small area in southern Kenya and northern Tanzania.

Large areas of grazing land were also turned into game reserves like the Maasai Mara and Samburu National Park in Kenya and Serengeti Park in Tanzania. Pastoralists were not allowed to enter these reserves; they could neither hunt animals nor graze their herds in

Q.4 There are many similarities in the way in which the modern world forced changes in the lives of pastoral communities in India and East Africa. Write about any two examples of changes which were similar for Indian pastoralists and the Maasai herders.

Solution: India and East Africa were under occupation by European colonial powers. There were many similarities in which both the regions were exploited by these powers

Various forest laws were also responsible for changing the lives of pastoralists both in India and Africa.

In India, the forest was classed as reserved and protected. No pastoralist was allowed access into the reserved forest.

One of the problems is the Maasai people have faced is the continuous loss of their grazing lands. The colonial government increase the local peasants to expand cultivation.

b) Closing of borders:

In Africa, Maasailand was cut into half with the International boundary between British Kenya and German Tanganyika. The best land was taken over by the White settlers, and the locals were pushed into a small area with restricted pastures.

In India, the division of country forced the Raikas to find out the new pastures in Haryana as due to political division they were no longer allowed to go to Sindh which became a province of Pakistani. The Sindh province has become a part of Pakistan, and the herders cannot go there

Pastoralism in the Modern World Summary

The NCERT Class 9 India and the Contemporary World – II Chapter 5 talks about the following topics:

1. Pastoral Nomads and their Movements

1.2 On the Plateaus, Plains and Deserts

2.1 How Did these Changes Affect the Lives of Pastoralists?

2.2 How Did the Pastoralists Cope with these Changes?

3.1 Where have the Grazing Lands Gone?

3.2 The Borders are Closed

Can the NCERT Solutions for Class 9 History Chapter 5 be considered as the best study material for exam preparations?

What are the benefits of referring to the NCERT Solutions for Class 9 History Chapter 5?

Students are recommended to answer the textbook questions by referring to the NCERT Solutions for Class 9 History Chapter 5 so that the learning is complete at one go. All the solutions are created by subject experts in a comprehensive manner that enables students to understand the important concepts better. Students will be able to analyse the type of questions that might appear in the final exams when using this resource regularly. Further, the solutions aid students to finish the syllabus on time so that they can focus on revisions prior to the exam.

What will students learn from Chapter 5 of NCERT Solutions for Class 9 History?

Below are the topics which students will learn in Chapter 5 of NCERT Solutions for Class 9 History:
1. Pastoral Nomads and their Movements
a) In the Mountains
b) On the Plateaus, Plains and Deserts
2. Colonial Rule and Pastoral Life
a) How Did these Changes Affect the Lives of Pastoralists?
b) How Did the Pastoralists Cope with these Changes?
3. Pastoralism in Africa
a) Where have the Grazing Lands Gone?
b) The Borders are Closed
c) When Pastures Dry