By definition, matter or material is anything that has mass and occupies space. Everything we see around us is matter. For example, a water bottle is made up of plastic or any metal, both of which are examples of matter. The matter has properties or characteristics, by which they can be identified. The major properties of materials can be categorized under:

For More Information On Thermal Expansion, Watch The Below Video: 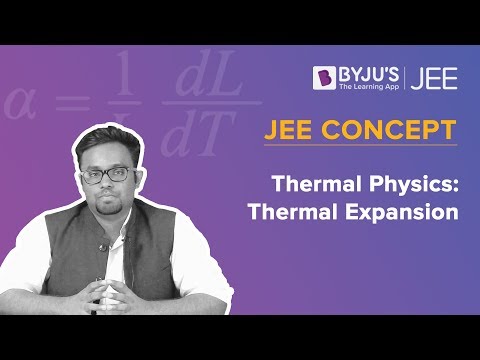 What are Thermal Properties of Matter?

Thermal properties of a material decide how it reacts when it is subjected to heat fluctuation (excessive heat or very low heat, for example). The major components of thermal properties are:

Heat capacity can be measured by the following formula:

is the amount of heat transferred, is the change in temperature.

What is Thermal Expansion?

When heat is passed through a material, its shape changes. Generally, a material expands when heated. This property of a material is called Thermal Expansion. There can be a change in the area, volume and shape of the material. For example, railway tracks often expand and as a result, get misshapen due to extreme heat.

What is Thermal conductivity

It is the property of a material to conduct heat through itself. Materials with high thermal conductivity will conduct more heat than the ones with low conductivity. Some materials do not conduct heat at all because of the insulating properties of materials.

What is Thermal stress?

The stress experienced by a body due to either thermal expansion or contraction is called thermal stress. It can be potentially destructive in nature as it can make the material explode.

What is ‘Thermal Equilibrium’?

The condition under which two substances in physical contact with each other exchange no heat energy is known as thermal equilibrium.

The quality or power of conducting or transmitting heat/ electricty is called as conductivity.

What is ‘Emissive power’?

Emittance (or emissive power) is the total amount of thermal energy emitted per unit area per unit time for all possible wavelengths.