In Chapter 1, you have learned that the division of power among different levels of government is one of the major forms of power sharing in modern democracies. In this chapter, you will understand the theory and practice of federalism in India. Towards the end of the chapter, you will know about the local government, a new and third tier of Indian federalism.

Here we have compiled the “CBSE Notes Class 10 Political Science Chapter 2 – Federalism”, which will provide a clear insight into the chapter and all the important concepts. You can download Class 10 Civics Chapter 2 notes in pdf format from the link below and can refer it offline as well.

Federalism is a system of government in which power is divided between a central authority and various constituent units of the country.

Some of the key features of federalism system are:

Different Routes Through Which Federations Can be Formed

Two aspects are crucial for the institutions and practice of federalism: mutual trust between the government of different levels and agreement to live together. There are two kinds of routes through which federations have been formed.

What Makes India a Federal Country?

1) Union List: It includes subjects of national importance such as the defence of the country, foreign affairs, banking, communications and currency. The Union Government alone can make laws relating to the subjects mentioned in this list.

2) State List: It contains subjects of State and local importance such as police, trade, commerce, agriculture and irrigation. The State Governments alone can make laws relating to the subjects mentioned in this list.

How is Federalism Practised?

The real success of federalism in India is attributed to its nature of democratic politics. Have a look at some of the major ways in which federalism is practised in India.

Restructuring the Centre-State relations is one more way in which federalism has been strengthened in practice. If no single party gets a clear majority in the Lok Sabha, the major national parties can alliance with many parties including several regional parties to form a government at the Centre. This led to a new culture of power sharing and respect for the autonomy of State Governments.

When power is taken away from Central and State governments and given to the local government, it is called decentralisation. The basic idea behind decentralisation is that there are a large number of problems and issues which are best settled at the local level. Local people can also directly participate in the decision making.

A major step towards decentralisation was taken in 1992. The Constitution was amended to make the third-tier of democracy more powerful and effective. Here are the key features of 3-tier democracy:

Rural local government is popularly known as Panchayati Raj. Each village, or a group of villages in some States, has a gram panchayat. This is a council consisting of several ward members, often called panch, and a president or sarpanch. They are directly elected by all the adult population living in a village or ward. Gram Panchayat is the decision-making body for the entire village.

The Panchayat works under the overall supervision of the Gram Sabha. All the voters in the village are its members. It has to meet at least twice or thrice in a year to approve the annual budget of the gram panchayat and to review the performance of the Gram Panchayat.

All the Panchayat Samitis or Mandals in a district together constitute the Zilla (district) Parishad. Members of the Lok Sabha, MLAs of the district, some other officials of other district-level bodies are the members of Zilla Parishad. 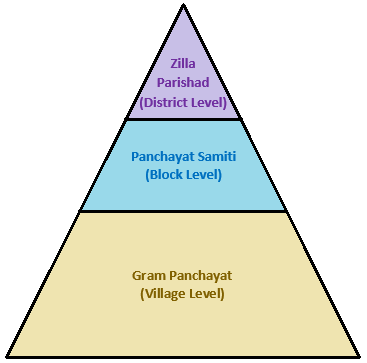 This new system of local government is the largest experiment in democracy conducted anywhere in the world. Constitutional status for local government has helped to deepen democracy in our country. It has also increased women’s representation and voice in our democracy.

Federalism is a system of government in which power is divided between a central authority and various constituent units of the country.

What are the sects under ‘Panchayati Raj’?

Panchayati Raj system consists of: Gram Panchayat at the village level, Panchayat Samiti at the block level and Zila Parishad at the district level.

What are the functions of ‘Municipality’?

1. Urban planning including town planning.2. Regulation of land-use and construction of buildings.3. Planning for economic and social development.4. Roads and bridges.5. Water supply for domestic, industrial and commercial purposes.