In Class 9, you have studied that in a democracy all power does not rest with any one organ of the government. An intelligent sharing of power among the legislature, executive and judiciary is very important for the design of democracy. In this chapter, the idea of power sharing is explained in detail, drawing parallels between the stories of Belgium and Sri Lanka. Also, you will learn the different forms of power sharing.

You can download the CBSE Notes Class 10 Political Science Chapter 1 – Power Sharing in PDF format from the link below.

Belgium is a small country in Europe with a population of over 1 crore, about half the population of Haryana. Of the country’s total population, 59% speaks Dutch language, 40% of people speak French and the remaining 1% speak German. Look at the map below to know the language variation of Belgium. The minority French-speaking community was rich and powerful, so they got the benefit of economic development and education. This created tensions between the Dutch-speaking and French-speaking communities during the 1950s and 1960s. 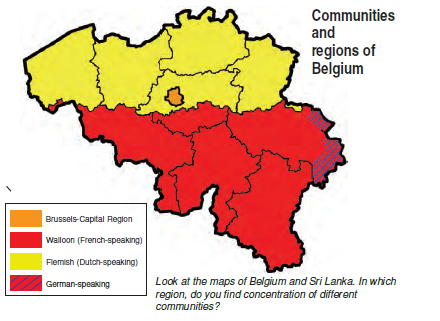 In Belgium, the government handled the community difference very well. Between 1970 and 1993, Belgian leaders amended their constitution four times and came up with a new model to run the government.

Here are some of the elements of the Belgian model.

The Belgium model was very complicated but it helped to avoid civic strife between the two major communities.

Now, let’s take the situation of another country, Sri Lanka. It is an island nation having a population of 2 crores, about the same as in Haryana. Sri Lanka has a diverse population. The major social groups are the Sinhala-speakers (74%) and the Tamil-speakers (18%). Among Tamils, there are two subgroups, “Sri Lankan Tamils” and “Indian Tamils”. You can see the map below to know the population distribution of different communities of Sri Lanka. In Sri Lanka, the Sinhala community enjoyed the bigger majority and imposed its will on the entire country.

Sri Lanka emerged as an independent country in 1948. The Sinhala community was in the majority so they had formed the government. They also followed preferential policies that favoured Sinhala applicants for university positions and government jobs. These measures taken by the government gradually increased the feeling of alienation among the Sri Lankan Tamils. Sri Lankan Tamils felt that constitution and government policies denied them equal political rights, discriminated against them in getting jobs and other opportunities and ignored their interests. Due to this, the relationship between the Sinhala and Tamil communities become poor. Sri Lankan Tamils launched parties and struggles for the recognition of Tamil as an official language, for regional autonomy and equality of opportunity in securing education and jobs. But their demand was repeatedly denied by the government. The distrust between the two communities turned into widespread conflict and turned into a CIVIL WAR. As a result, thousands of people of both the communities have been killed. Many families were forced to leave the country as refugees and many more lost their livelihoods. The civil war ended in 2009 and caused a terrible setback to the social, cultural and economic life of the country.

What have you learned from the Stories of Belgium and Sri Lanka?

Why is power sharing desirable?

You will find the answer to this question in the points below.

Let us call the first set of reasons Prudential and the second moral. The prudential reasons stress that power sharing will bring out better outcomes, whereas the moral reasons emphasise the act of power sharing as valuable.

Most of you must think that Sharing power = dividing power = weakening the country. A similar thing was believed in the past. It was assumed that all the power of a government must reside in one person or group of persons located at one place. Otherwise, it would be very difficult to make quick decisions and to enforce them. But these notions have changed with the emergence of democracy. In a democracy, people rule themselves through institutions of self-government. Everyone has a voice in the shaping of public policies. Therefore, in a democratic country, political power should be distributed among citizens.

In modern democracies, power sharing can take many forms, as mentioned below:

What is ‘Power Sharing’?

Power sharing means the distribution of power among the organs of the government such as the legislature, executive and judiciary.

What are the languages spoken in Belgium?

Where is Sri Lanka located?

Sri Lanka is an island in the Indian Ocean, located to the south of Indian Subcontinent. sprawling over the area of 65,525 Sq. km.