Why Do We Need Political Parties?

A Political Party is a group of people who come together to contest elections and hold power in the government. They agree on some policies and programmes for the society with a view to promote the collective good. Parties reflect fundamental political divisions in a society. Thus, a party is known by which part it stands for, which policies it supports and whose interests it upholds. A political party has three components:

Political parties fill political offices and exercise political power. Parties do so by performing a series of functions mentioned below:

The Necessity of Political Parties

How Many Parties Should We Have?

In a democracy, any group of citizens is free to form a political party. More than 750 parties are registered with the Election Commission of India. But not all these parties are serious contenders in the elections. So the question, then is: how many major or effective parties are good for democracy?

In some countries, only one party is allowed to control and run the government. These are called one-party systems. This system is not considered as a good option for democracy.

In some countries, power usually changes between the two main parties. Such a party system is called a two-party system. Eg: The United States of America and the United Kingdom.

If several parties compete for power, and more than two parties have a reasonable chance of coming to power either on their own strength or in alliance with others, it is called a multiparty system. Eg: India.

When several parties in a multi-party system join hands for the purpose of contesting elections and winning power, it is called an alliance or a front.

Every party in the country has to register with the Election Commission. It offers some special facilities for large and established parties. The Election Commission has laid down detailed criteria of the proportion of votes and seats that a party must get in order to be a recognised party.

There were 7 recognised national parties in the country in 2018. Here are the details of these parties:

The Election Commission has classified some of the major parties of the country as “State parties”. These are also referred to as regional parties. Some of these parties are:

The Map below shows the Regional Parties in India (as on 13th April 2018): 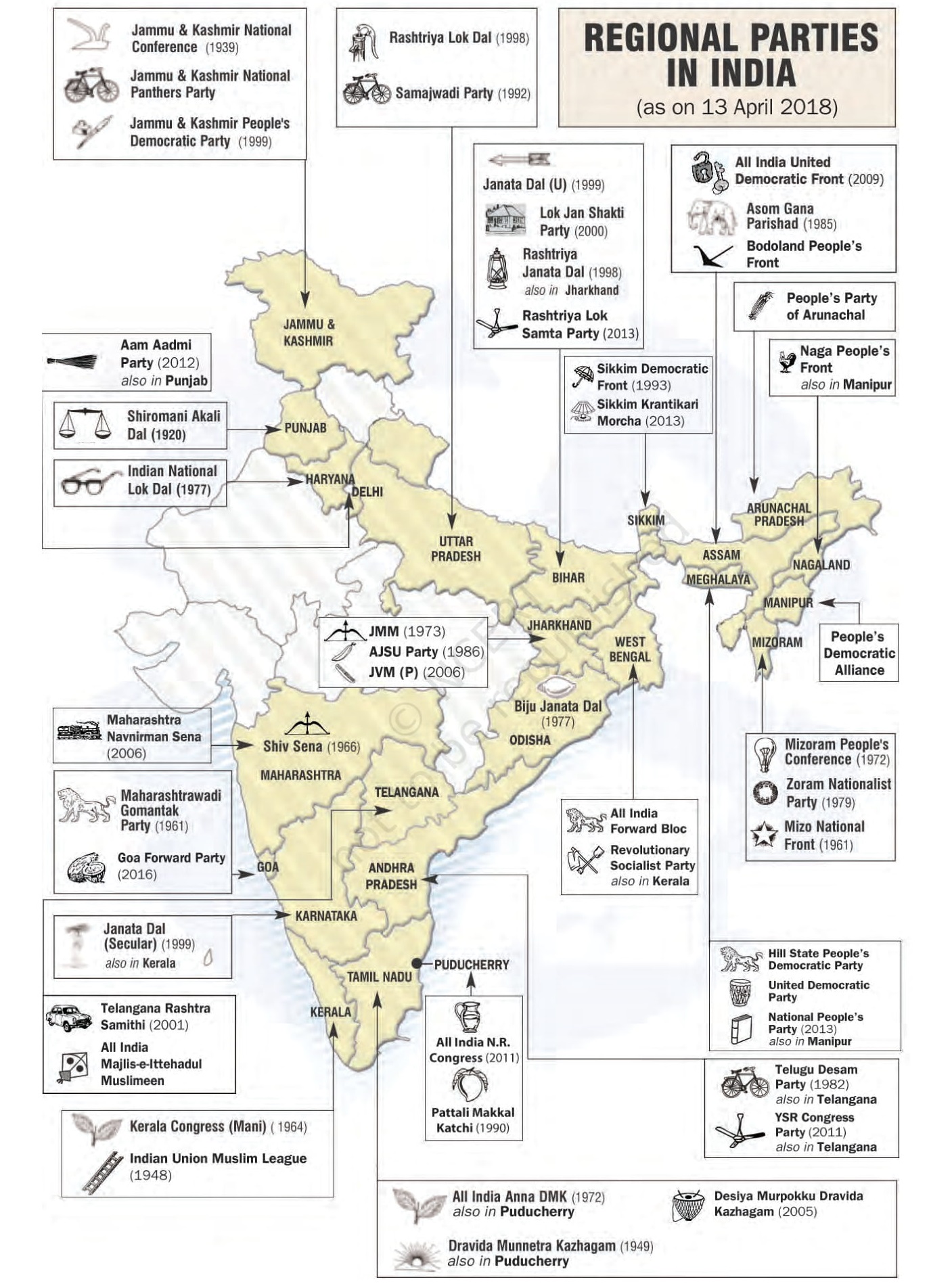 Popular dissatisfaction and criticism have focused on 4 problem areas in the working of political parties. These are:

How can Parties be Reformed?

Have a look at some of the recent efforts and suggestions to reform political parties and its leaders in India. Some efforts are listed below:

There are two other ways in which political parties can be reformed.

We have compiled History, Geography, Political Science and Geography notes at one place. You can access them by visiting CBSE Class 10 Social Science Notes at BYJU’S. Keep learning and stay tuned for further updates on CBSE and other competitive exams. Download the BYJU’S App and subscribe to YouTube channel to access interactive Maths and Science videos.

What are the functions of political parties?

1. Contest elections 2. Introduce programmes and policies for welfare of the public 3. Take legislative decisions and execute them legally

How many political parties are there in India?

The Election Commission of India recorded a count of 2858 political parties all over India in September 2021.

What is the minimum age in India to join a political party?

A person should be of a minimum age of 25 years to be a part of any poliical party in india.