By now, you must have known that the Parliament is in charge of making laws. In CBSE Notes Class 8 Civics Chapter 4 – Understanding Laws you will find the answers to questions such as Do laws apply to everyone? How do new laws come into being? Could there be laws that are unpopular or controversial? What should we as citizens do under such circumstances? So, go through the notes and understand important topics which are discussed in this chapter.

Do Laws Apply to All?

The law cannot discriminate between persons on the basis of their religion, caste or gender. What the rule of law means is that all laws apply equally to all citizens of the country and no one can be above the law. Neither a government official nor a wealthy person nor even the President of the country is above the law. Any crime or violation of law has a specific punishment as well as a process through which the guilt of the person has to be established.

How Do New Laws Come About?

Parliament has an important role in making laws. There are many ways through which this takes place.

For More Information On Law Making 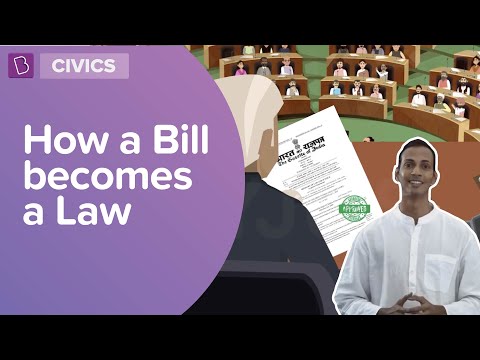 Sometimes a law can be constitutionally valid and hence legal, but it can continue to be unpopular and unacceptable to people because they feel that the intention behind it is unfair and harmful. When a large number of people begin to feel that a wrong law has been passed, then there is pressure on the Parliament to change this.

The involvement and enthusiasm of the people help Parliament perform its representative functions properly.

We hope CBSE Social Science Notes for Class 8 Civics helped you in your studies. Keep learning and stay tuned for more updates on CBSE and NCERT. Download BYJU’S App and subscribe to YouTube channel to access interactive Maths and Science videos.

1. Duty of a citizen to follow laws 2. To avoid dispute 3. To leave in peace and harmony

A bill is proposed legislation under consideration by a legislature is a bill.

What is a ‘controversial law’?

Controversial laws are those which favour one section of the society against the other.