Atoms are the smallest particle of a chemical element that can possibly exist. We have learnt that atoms and molecules are the basic building blocks of matter and the existence of different kinds of matter is due to different atoms which constitute them. Through CBSE class 9 science chapter 4 notes for Structure of atoms we understand the structure and composition of atoms in detail.

Thomson’s Model Of An Atom 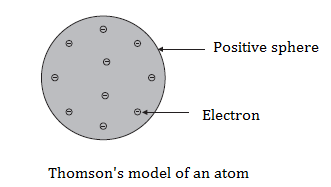 He proposed the following:

Rutherford’s Model Of An Atom

Rutherford carried out an experiment where fast-moving alpha particles were made to fall on a thin gold foil. The following were his observations:

Following were his conclusions from the a-particle scattering experiment:

On the basis of his experiment, Rutherford put forward the nuclear model of an atom, which had the following features:

Drawbacks of Rutherford’s model of the atom:

Neils Bohr put forward the following postulates about the model of an atom: Neutrons have no charges, they have a mass nearly equal to that of a proton. They are found in nucleus of all atoms except in hydrogen. They are represented as ‘n’. Hence, the mass of an atom is given by the sum of masses of protons and neutrons present in the nucleus.

Distribution Of Electrons In Different Orbits

The distribution of electrons into different orbits of an atom was suggested by Bohr and Bury.

The following rules are followed for writing the number of electrons in different energy levels or shells:

Hence the maximum number of electrons in different shells are as follows:

Atomic number – denoted by ‘Z’. It is defined as the total number of protons present in the nucleus of an atom.

In the notation for an atom, the atomic number, mass number and symbol of the element are to be written as:

It can be defined as the atoms of the same element, having the same atomic number but different mass numbers. Therefore, we can say that there are three isotopes of a hydrogen atom, namely protium, deuterium and tritium.

It can be defined as the atoms of different elements with different atomic numbers, which

number 18. The number of protons in these atoms is different, but the mass number of

both these elements is 40