NCERT class 12 Biology exemplar for chapter 3 pdf presents you the questions and answers given in NCERT exemplar book together with important questions from previous year examination, extra questions prepared by subject experts at BYJU’S, worksheets, assignments and exercises. 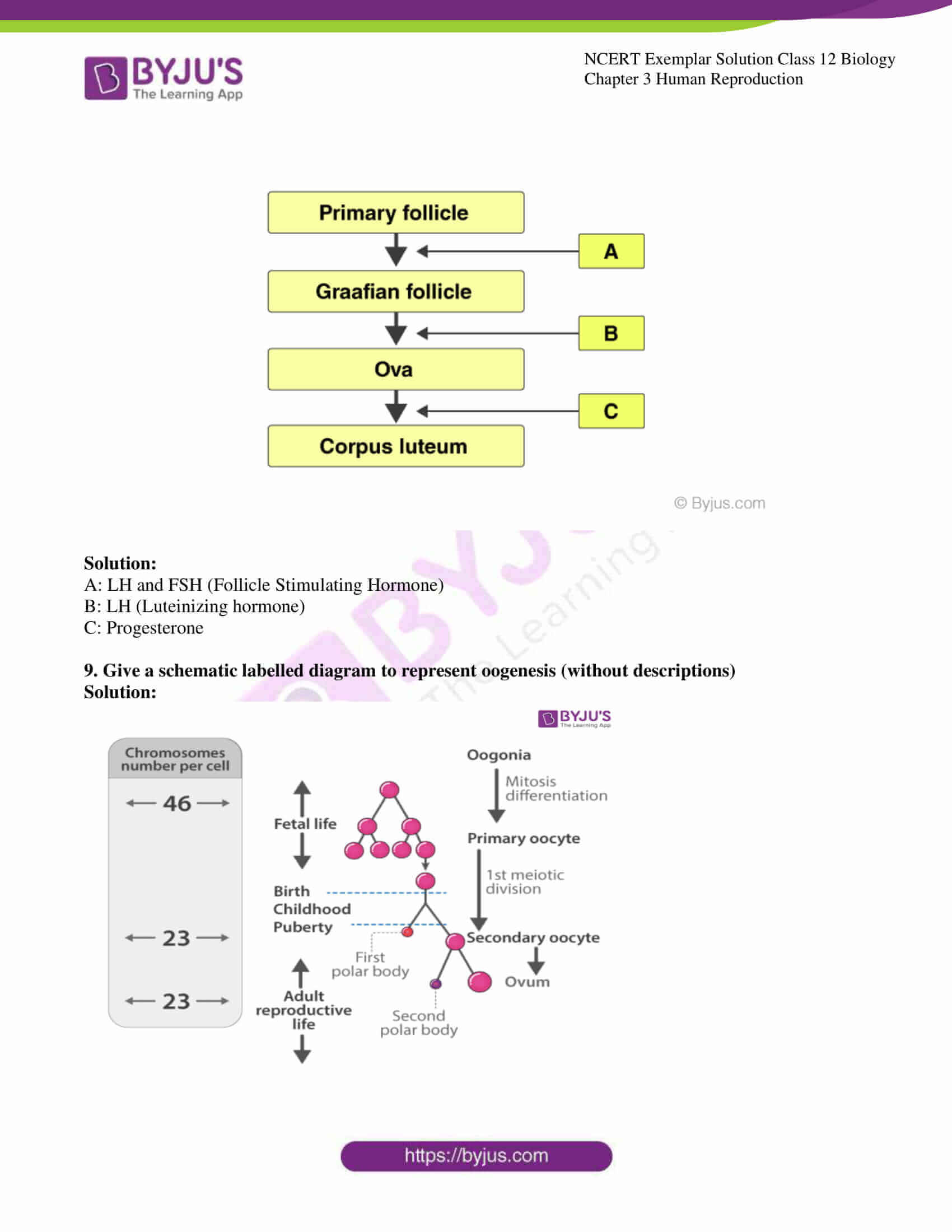 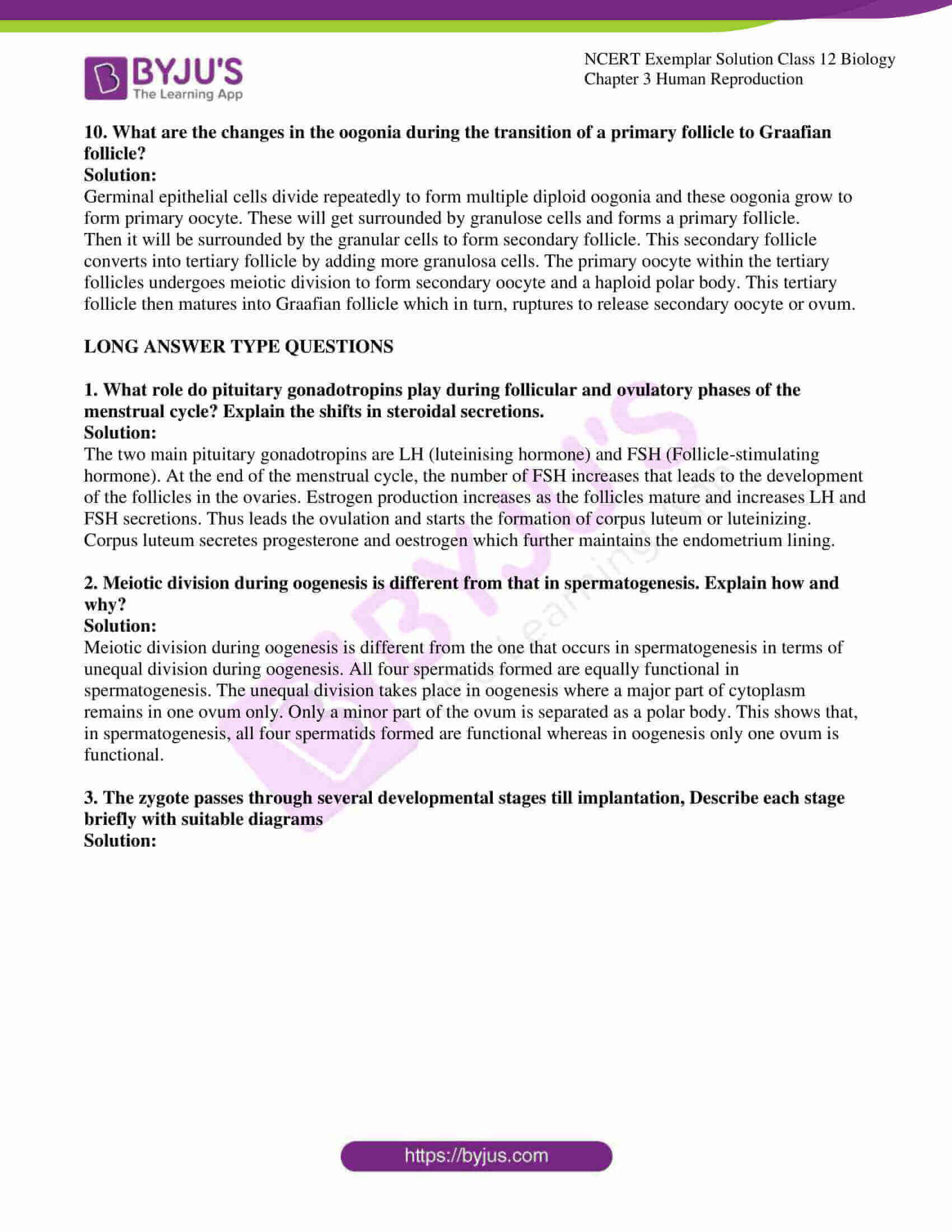 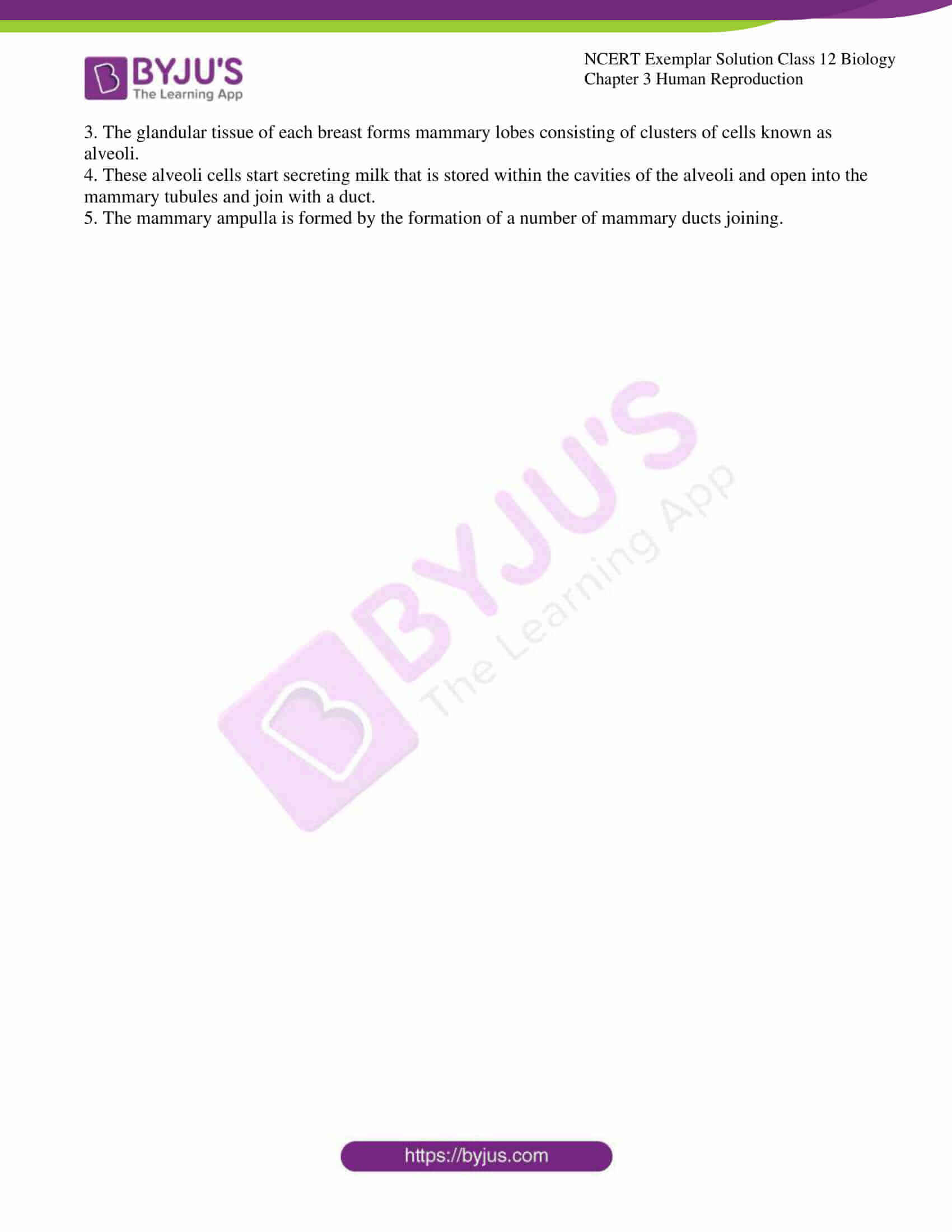 1. Choose the incorrect statement from the following:

a. In birds and mammals, internal fertilisation takes place

b. Colostrum contains antibodies and nutrients

c. Polyspermy in mammals is prevented by the chemical changes in

2. Identify the correct statement from the following:

a. High levels of estrogen trigger the ovulatory surge.

b. Oogonial cells start to proliferate and give rise to functional ova in

d. Progesterone level is high during the post-ovulatory phase of

3. Spot the odd one out from the following structures with reference to the

4. Seminal plasma, the fluid part of semen, is contributed by.

5. Spermiation is the process of the release of sperms from:

6. Mature Graafian follicle is generally present in the ovary of a healthy

7. The acrosomal reaction of the sperm occurs due to:

a. Its contact with zona pellucida of the ova

b. Reactions within the uterine environment of the female

c. Reactions within the epididymal environment of the male

d. Androgens produced in the uterus

8. Which one of the following is not a male accessory gland?

9. The spermatogonia undergo division to produce sperms by the process

of spermatogenesis. Choose the correct one with reference to above.

a. Spermatogonia have 46 chromosomes and always undergo meiotic

d. Spermatozoa are transformed into spermatids

10. Match between the following representing parts of the sperm and their

functions and choose the correct option.

11. Which among the following has 23 chromosomes?

12. Match the following and choose the correct options:

13. Which of the following hormones is not secreted by human placenta?

14. The vas deferens receives duct from the seminal vesicle and opens into

15. Urethral meatus refers to the:

b. Opening of vas deferens into urethra

c. The external opening of the urinogenital duct

16. Morula is a developmental stage:

a. Between the zygote and blastocyst

b. Between the blastocyst and gastrula

c. After the implantation

d. Between implantation and parturition

17. The membranous cover of the ovum at ovulation is:

18. Identify the odd one from the following:

1. Given below are the events in human reproduction. Write them in correct sequential order. Insemination, gametogenesis, fertilisation, parturition, gestation, implantation

2. The path of sperm transport is given below. Provide the missing steps in blank boxes.

3. What is the role of cervix in the human female reproductive system?

Cervix is the part of the female reproductive system that connects the uterus to the womb. It allows sperms to pass and also act as a reservoir for the sperm.

4. Why are menstrual cycles absent during pregnancy.

Gonadotropin Hormone (hCG) will start producing once a woman gets pregnant. This hormone starts developing Corpus Luteum that secretes a hormone called progesterone which maintains the thickness of the endometrium lining and prevents it from shedding. The level of oestrogen and progesterone during pregnancy results in the absence of the menstrual cycle.

5. Female reproductive organs and associated functions are given below in column A and B. Fill the blank boxes.

6. From where the parturition signals arise-mother or foetus? Mention the main hormone involved in parturition.

Parturition is a term that is used to describe the delivery of baby and placenta from the mother’s uterus to the outside world. Oxytocin is the principal hormone involved in parturition.

7. What is the significance of epididymis in male fertility?

The epididymis is a coiled structure within the scrotum. Sperms mature physiologically, their motility and fertilizing capacity increases within the epididymis.

8. Give the names and functions of the hormones involved in the process of spermatogenesis. Write the names of the endocrine glands from where they are released.

9. The mother germ cells are transformed into a mature follicle through a series of steps. Provide the missing steps in the blank boxes.

10. During reproduction, the chromosome number (2n) reduces to half (n) in the gametes and again the original number (2n) is restored in the offspring, what are the processes through which these events take place?

During gametogenesis, the chromosome number (2n) reduces to half (n) and the actual number (2n) of chromosomes is restored in the offspring after fertilization.

11. What is the difference between a primary oocyte and a secondary oocyte?

12. What is the significance of ampullary–isthmic junction in the female reproductive tract?

Ovum fertilization takes place at the ampullary-isthmic junction in the female reproductive tract.

13. How does zona pellucida of ovum help in preventing polyspermy?

Proteases destroy the protein link between the cell and vitelline membrane as well as between the receptor protein and any other sperm bound to it, hence, prevent polyspermy.

14. Mention the importance of LH surge during the menstrual cycle.

LH or luteinizing hormone surge leads to the rupture of Graafian follicle and releases ovum into the fallopian tube. LH surge is responsible for the luteal phase in the ovarian cycle.

15. Which type of cell division forms spermatids from the secondary spermatocytes?

1. A human female experiences two major changes, menarche and menopause during her life. Mention the significance of both the events.

Menarche is the beginning of the menstrual cycle in a female’s life that starts at the age of puberty and marks the attainment of sexual maturity.

Menopause is the end stage of a woman’s menstrual cycle that marks the end of the reproductive stage.

2. a. How many spermatozoa are formed from one secondary spermatocyte?

b. Where does the first cleavage division of zygote take place?

(a) Two spermatozoa are formed from one secondary spermatocyte.

(b) The first cleavage division of zygote takes place in the fallopian tube or oviduct.

3. Corpus luteum in pregnancy has a long life. However, if fertilization does not take place, it remains active only for 10-12 days. Explain.

During pregnancy, corpus luteum releases a large amount of progesterone and oestrogen due to the neural signal given by the maternal endometrium to the hypothalamus. The embryo will be maintained until the gestation period after the release of luteinising hormone. If the fertilization does not occur, corpus luteum would not be able to remain active for more than 10-12 days because of the lack of progesterone which is required to maintain the corpus luteum.

4. What is foetal ejection reflex? Explain how it leads to parturition?

5. Except for the endocrine function, what are the other functions of the placenta?

1) Attaches uterus to the uterine wall.

2) Provides nutrients to the growing foetus.

3) Provides oxygen to the foetus.

6. Why do doctors recommend breastfeeding during the initial period of infant growth?

Doctors recommend breastfeeding during the initial period of infant growth because for a few days during the start of lactation, the milk produced by colostrum (the female mammary glands), is full of antibodies.

7. What are the events that take place in the ovary and uterus during the follicular phase of the menstrual cycle?

i. The primary follicle matures into Graafian follicle.

ii. After this the secretion on oestrogen takes place.

iii. The endometrium lining of the uterus regenerates through proliferation.

8. Given below is a flow chart showing ovarian changes during the menstrual cycle. Fill in the spaces giving the name of the hormones responsible for the events shown. 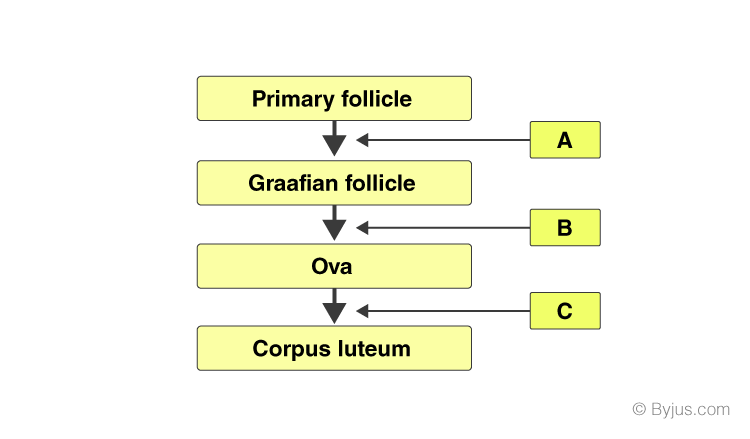 9. Give a schematic labelled diagram to represent oogenesis (without descriptions) 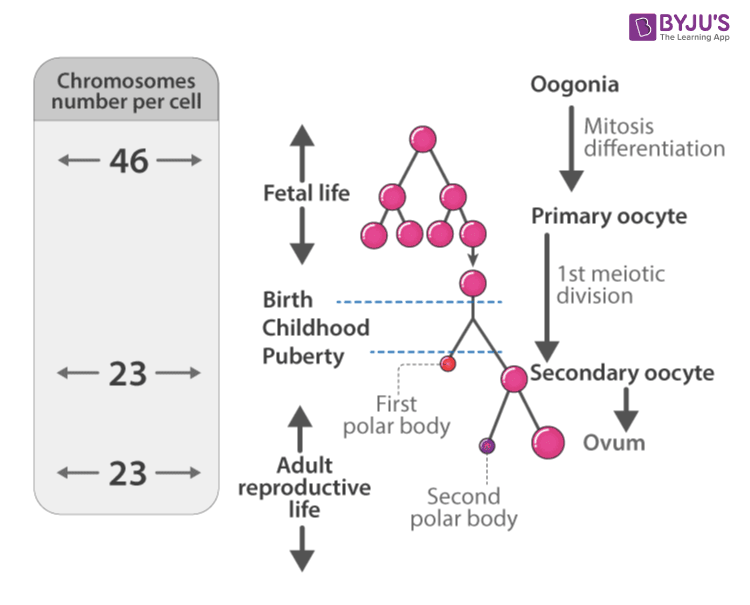 10. What are the changes in the oogonia during the transition of a primary follicle to Graafian follicle?

Germinal epithelial cells divide repeatedly to form multiple diploid oogonia and these oogonia grow to form primary oocyte. These will get surrounded by granulose cells and forms a primary follicle.

1. What role do pituitary gonadotropins play during follicular and ovulatory phases of the menstrual cycle? Explain the shifts in steroidal secretions.

The two main pituitary gonadotropins are LH (luteinising hormone) and FSH (Follicle-stimulating hormone). At the end of the menstrual cycle, the number of FSH increases that leads to the development of the follicles in the ovaries. Estrogen production increases as the follicles mature and increases LH and FSH secretions. Thus leads the ovulation and starts the formation of corpus luteum or luteinizing.

2. Meiotic division during oogenesis is different from that in spermatogenesis. Explain how and why?

3. The zygote passes through several developmental stages till implantation, Describe each stage briefly with suitable diagrams 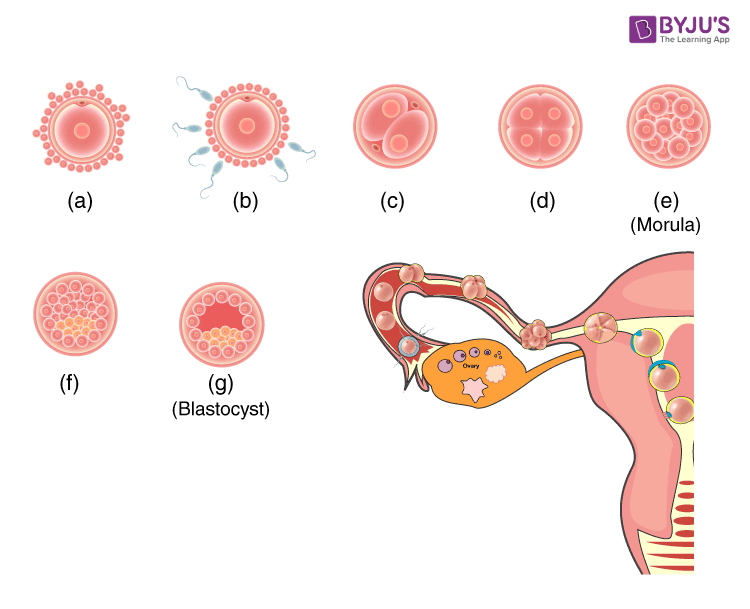 In the figure, ‘a’ shows the zygote formation after the fusion of male and female gametes and ‘b’ shows the entrance of zygote to the isthmus.

Cleavage stage: Within the isthmus, the zygote formed by the fusion of the male and female gamete, enters the two-cell stage known as cleavage.

Blastomere: The cleavage formed, undergoes mitosis. At first, it forms a 2 then 4, then 8 and finally 16 cells stage. These daughter cells are called as blastomere.

Morula: The 8-16 cell blastomere are known as a morula. This morula divides continuously to form a blastocyst and moves into the uterus.

4. Draw a neat diagram of the female reproductive system and label the parts associated with the following (a) production of gamete, (b) site of fertilization (c) site of implantation and, (d) birth canal. 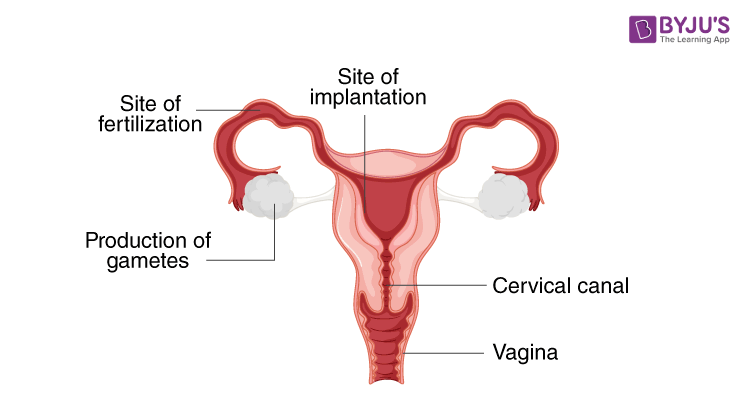 5. With a suitable diagram, describe the organisation of mammary gland. 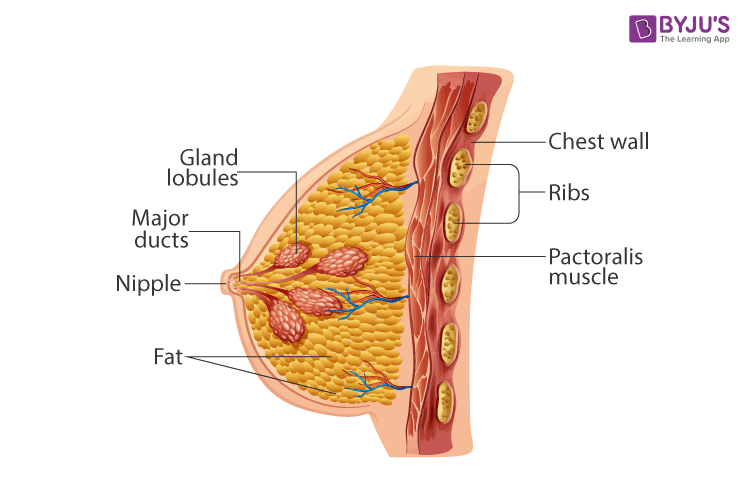 1. The mammary gland is a paired organ which has an undeveloped duct system and adipose tissue.

2. The secretion of oestrogen and progesterone increases when a woman gets pregnant and produce milk when a glandular system in the mammary glands.

3. The glandular tissue of each breast forms mammary lobes consisting of clusters of cells known as alveoli.

4. These alveoli cells start secreting milk that is stored within the cavities of the alveoli and open into the mammary tubules and join with a duct.

5. The mammary ampulla is formed by the formation of a number of mammary ducts joining.

Biology is a theoretical subject which often gets evaporated from a mind. It is very difficult to memorise the minute details which are often asked in entrance examinations. In order to help students memorise all the details of Biology concepts, BYJU’S bring very interesting videos and animations that help you not only understand the topic thoroughly but also assist you in memorising the topic for a very long period of time.

For Chapter-wise NCERT exemplars of all the classes and subjects register with BYJU’S or download BYJU’S learning App.