NCERT Solutions are considered as one of the best study materials while preparing for the CBSE Class 12 Economics Board examinations. This study resource possesses deep knowledge and the Solutions collated by the subject matter experts are no different. 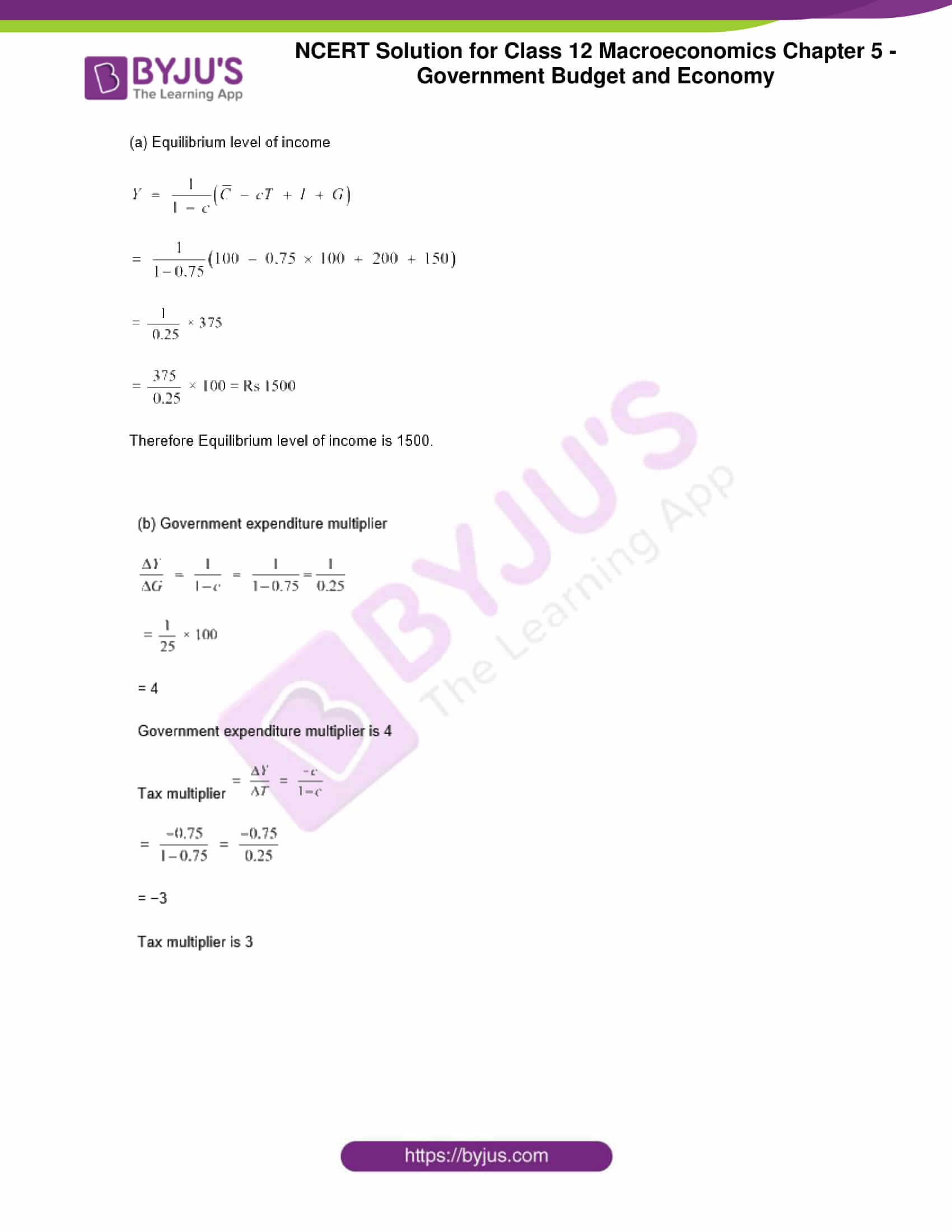 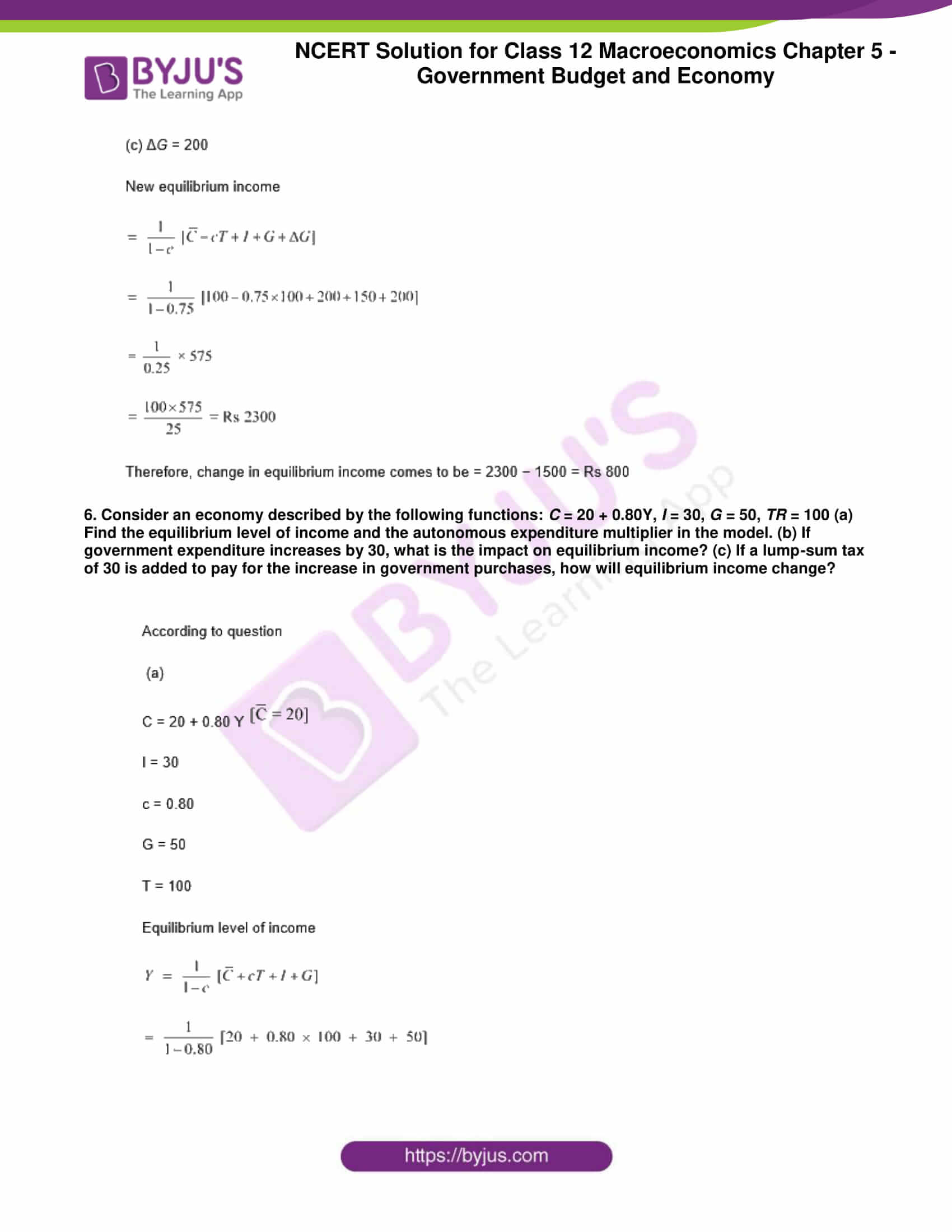 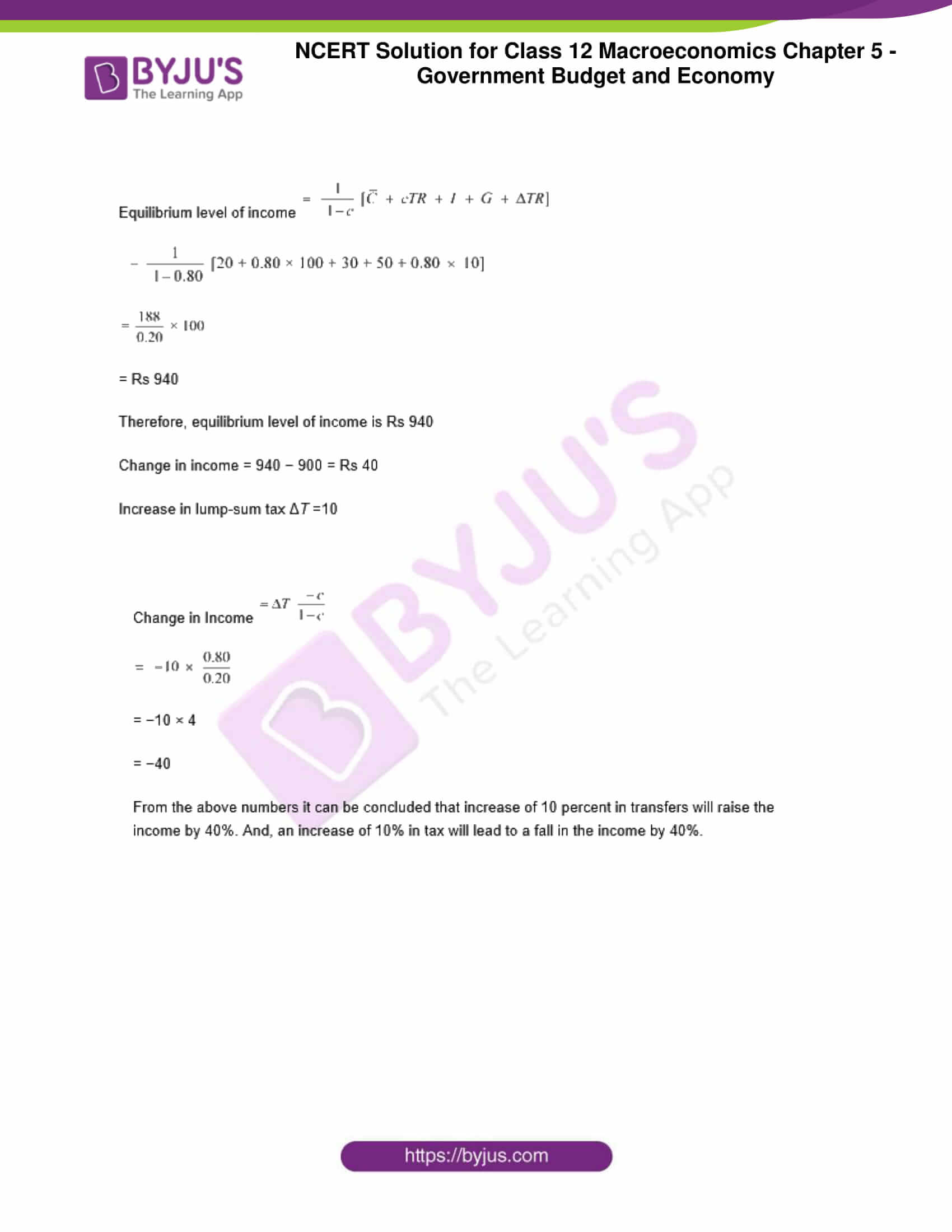 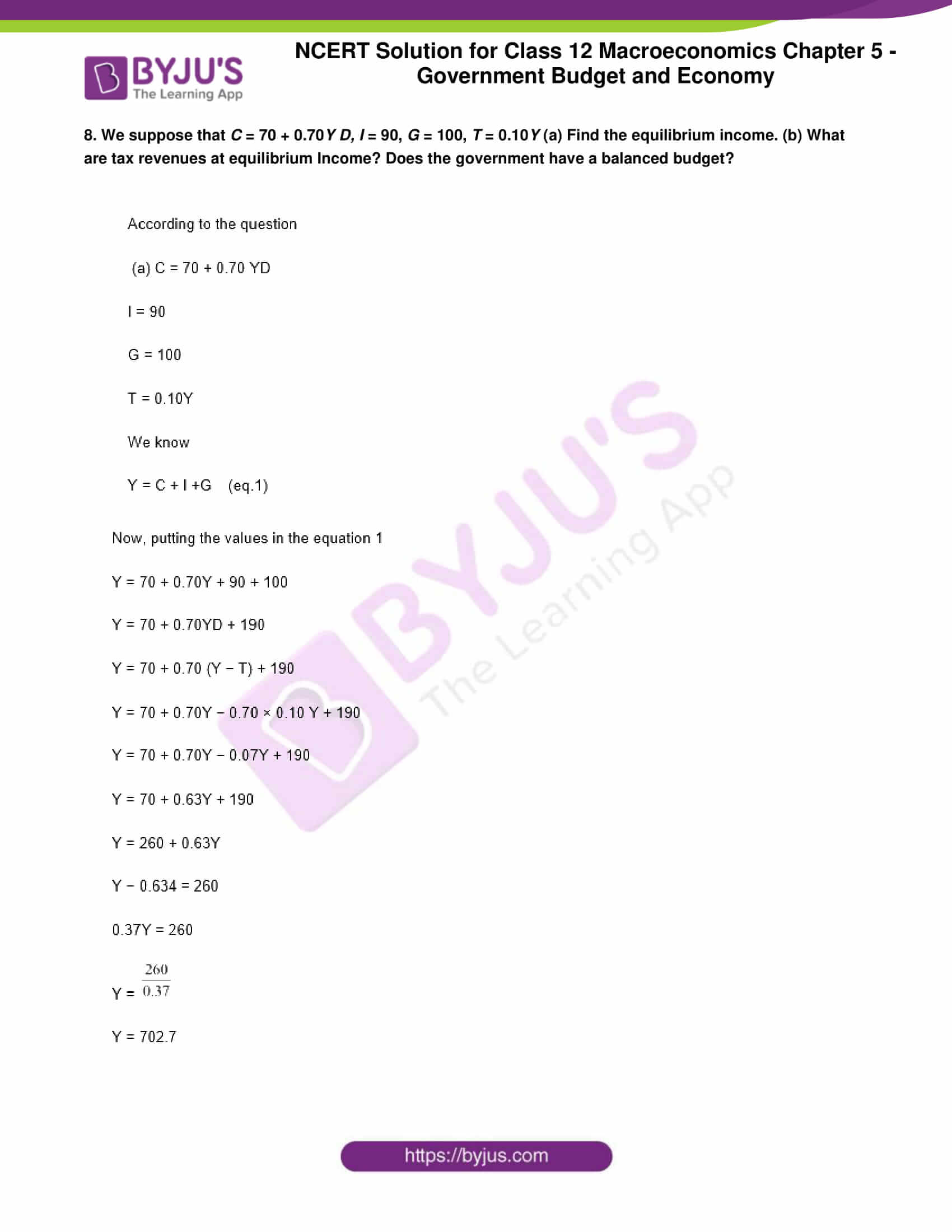 1. Explain why public goods must be provided by the government.

Therefore, government should provide public goods for the following reasons:

1. So that benefits of the public goods can be enjoyed by all members of the society.

3. ‘The fiscal deficit gives the borrowing requirement of the government’. Elucidate.

Fiscal deficit is referred to as the shortfall in government’s income as compared to its spending. A high fiscal deficit means that the government is borrowing more money than that it is earning. A higher fiscal deficit creates a burden of loan and interest payment for future generation.

Fiscal deficit is determined by

4. Give the relationship between the revenue deficit and the fiscal deficit.

5. Suppose that for a particular economy, investment is equal to 200, government purchases are 150, net taxes (that is lump-sum taxes minus transfers) is 100 and consumption is given by C = 100 + 0.75Y (a) What is the level of equilibrium income? (b) Calculate the value of the government expenditure multiplier and the tax multiplier. (c) If government expenditure increases by 200, find the change in equilibrium income. 6. Consider an economy described by the following functions: C = 20 + 0.80Y, I = 30, G = 50, TR = 100 (a) Find the equilibrium level of income and the autonomous expenditure multiplier in the model. (b) If government expenditure increases by 30, what is the impact on equilibrium income? (c) If a lump-sum tax of 30 is added to pay for the increase in government purchases, how will equilibrium income change? 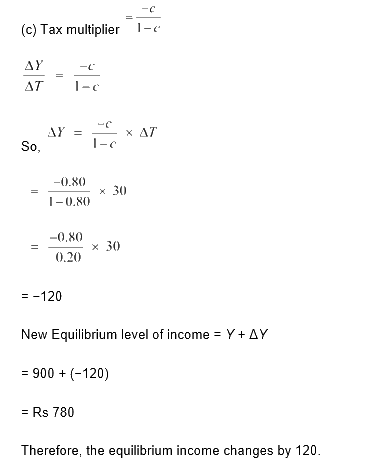 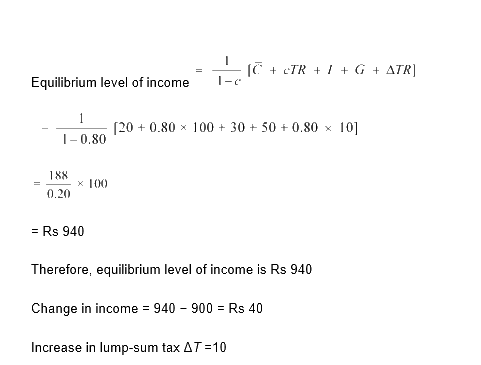 9. Suppose marginal propensity to consume is 0.75 and there is a 20 per cent proportional income tax. Find the change in equilibrium income for the following (a) Government purchases increase by 20 (b) Transfers decrease by 20. 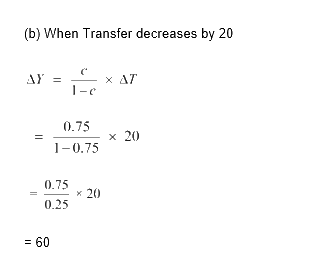 Therefore the change in equilibrium income is 20.

10. Explain why the tax multiplier is smaller in absolute value than the government expenditure multiplier.

The following example will help in understanding

This shows that government expenditure multiplier is always more than the tax multiplier.

Public debt is referred to the amount of money that a government owes to banks, financial institutions and other sources of finance. It is known to impose a burden on the economy in the following ways:

1. Government may impose taxes or print new money to repay the existing debts. Such a situation will hamper the productivity of the nation.

2. A high level of debt creates burden on future generations in form of interests and taxes being levied on the younger generation, it will result in lower consumption and savings.

4. Wealth of the nation is depleted when loans are repaid to foreign institutions and countries.

Fiscal deficit will not always result in inflation. If a situation arises when the government expenditure increases and tax reduction is seen, it will cause deficit in the government which leads to increase in aggregate demand. Firms will not be able to meet the demand thus generated which will result in price increase. Therefore fiscal deficits can become inflationary, but it will not be inflationary in the case when resources are less utilized due to insufficient demand and less output, then if the government is spending more also, more resources will be employed in order to meet the growing demand and there will be no pressure on price rise. In such a situation a high fiscal deficit along with high demand and greater output will not create an inflationary situation.

14. Discuss the issue of deficit reduction.

Government can reduce budget deficit by the following methods

Decreasing Expenditure can be achieved by:

a. More planned activities should be undertaken by government to reduce expenditure.

b. Encouraging private sector to contribute to some major capital projects will help reduce expenditure.

Increase in revenue can be obtained by:

a. Raising taxes or introducing new taxes can contribute to increase in revenue.

b. By selling stakes in PSU by a process called divestment can bring in more revenue.

NCERT Solution for Class 12 Economics Chapter 5 – Government Budget And Economy.  This chapter explains in brief a manner about how the budget and employment are determined.