Here we have brought to you the most accurate and elaborate NCERT Solutions for Class 6 English Chapter 6 The Monkey and the Crocodile where we have answered all the questions of the English supplementary reader A Pact with the Sun. These NCERT Solutions for Class 6 will help students get a clear understanding of how to frame solutions and score well in their examinations.

This is a famous story from the Panchatantra which is about a monkey and a crocodile. It takes the readers through their journey of short-lived friendship. A story filled with emotions of friendship, betrayal, and greed, it teaches the students that quick intelligence can prove to be one’s biggest saviour.

Click on the link provided below to download these NCERT Solutions for Class 6 English in PDF format, and enjoy learning anywhere, anytime! 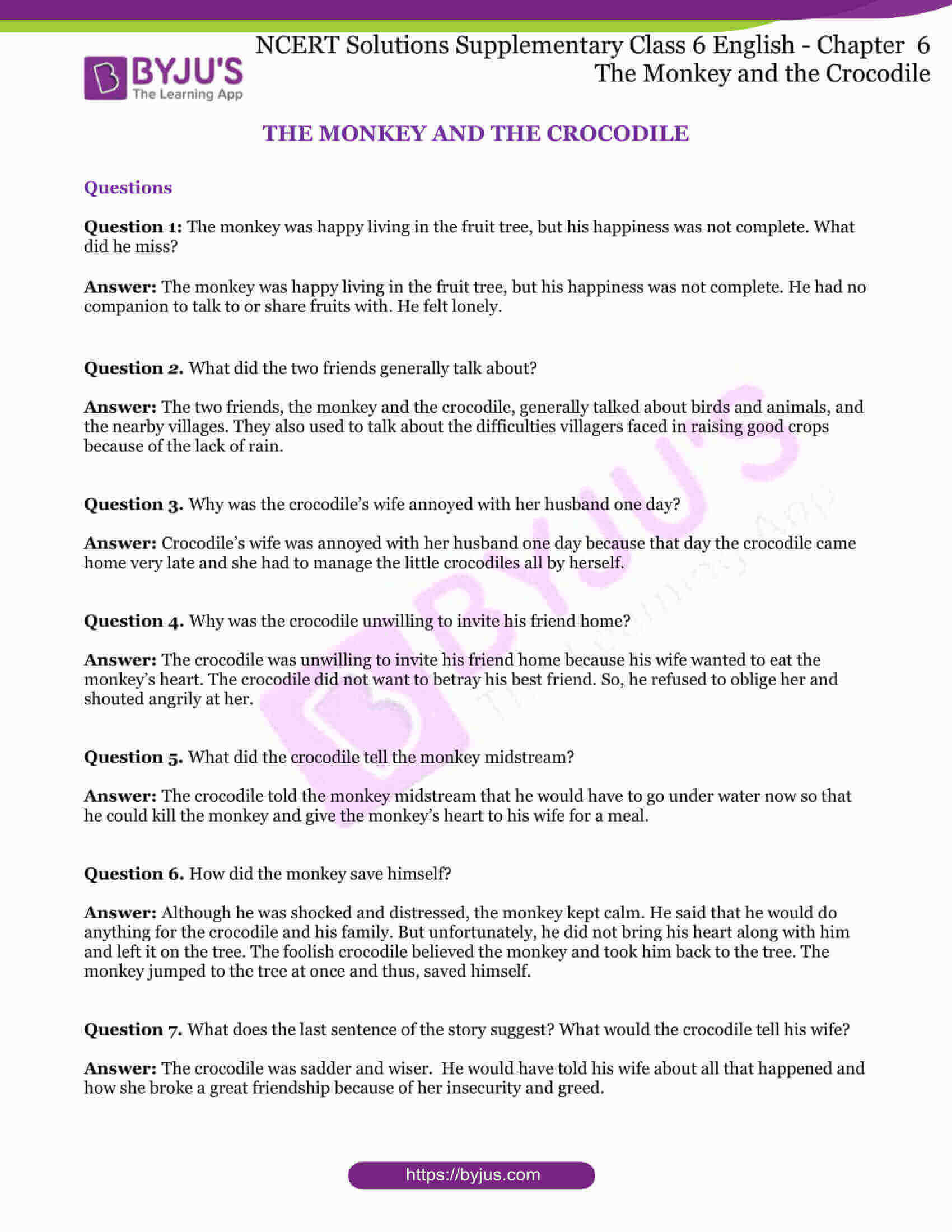 THE MONKEY AND THE CROCODILE

The Monkey and the Crocodile

Question 1: The monkey was happy living in the fruit tree, but his happiness was not complete. What did he miss?

Answer: The monkey was happy living in the fruit tree, but his happiness was not complete. He had no companion to talk to or share fruits with. He felt lonely.

Question 2. What did the two friends generally talk about?

Answer: The two friends, the monkey and the crocodile, generally talked about birds and animals, and the nearby villages. They also used to talk about the difficulties villagers faced in raising good crops because of the lack of rain.

Question 3. Why was the crocodile’s wife annoyed with her husband one day?

Answer: Crocodile’s wife was annoyed with her husband one day because that day the crocodile came home very late and she had to manage the little crocodiles all by herself.

Question 4. Why was the crocodile unwilling to invite his friend home?

Answer: The crocodile was unwilling to invite his friend home because his wife wanted to eat the monkey’s heart. The crocodile did not want to betray his best friend. So, he refused to oblige her and shouted angrily at her.

Question 5. What did the crocodile tell the monkey midstream?

Answer: The crocodile told the monkey midstream that he would have to go under water now so that he could kill the monkey and give the monkey’s heart to his wife for a meal.

Question 6. How did the monkey save himself?

Answer: Although he was shocked and distressed, the monkey kept calm. He said that he would do anything for the crocodile and his family. But unfortunately, he did not bring his heart along with him and left it on the tree. The foolish crocodile believed the monkey and took him back to the tree. The monkey jumped to the tree at once and thus, saved himself.

Question 7. What does the last sentence of the story suggest? What would the crocodile tell his wife?

Answer: The crocodile was sadder and wiser. He would have told his wife about all that happened and how she broke a great friendship because of her insecurity and greed.