NCERT Solutions for Class 6 English Unit 9 – What Happened To The Reptiles of the Supplementary Reader – A Pact with the Sun can be downloaded for free at BYJU’S. These solutions will help students to solve the textbook and exercise questions with ease and also develop their English writing skills. The NCERT Solutions of Class 6 English have been solved by our panel of expert teachers in order to provide well-structured solutions for Class 6 students.

The story, “What Happened To The Reptiles” is about Pambupatti, a peaceful village that is inhabited by a variety of people. Long ago, only reptiles lived in the forest, and how the absence of different reptiles caused disruption in the lives of other living beings. This chapter enlightens students that every living creature has a key role to play in the environment. This story emphasizes the significance of co-existence and living in peace and harmony by all living creatures.

You can download these NCERT Solutions for Class 6 English in PDF format through the link given below. 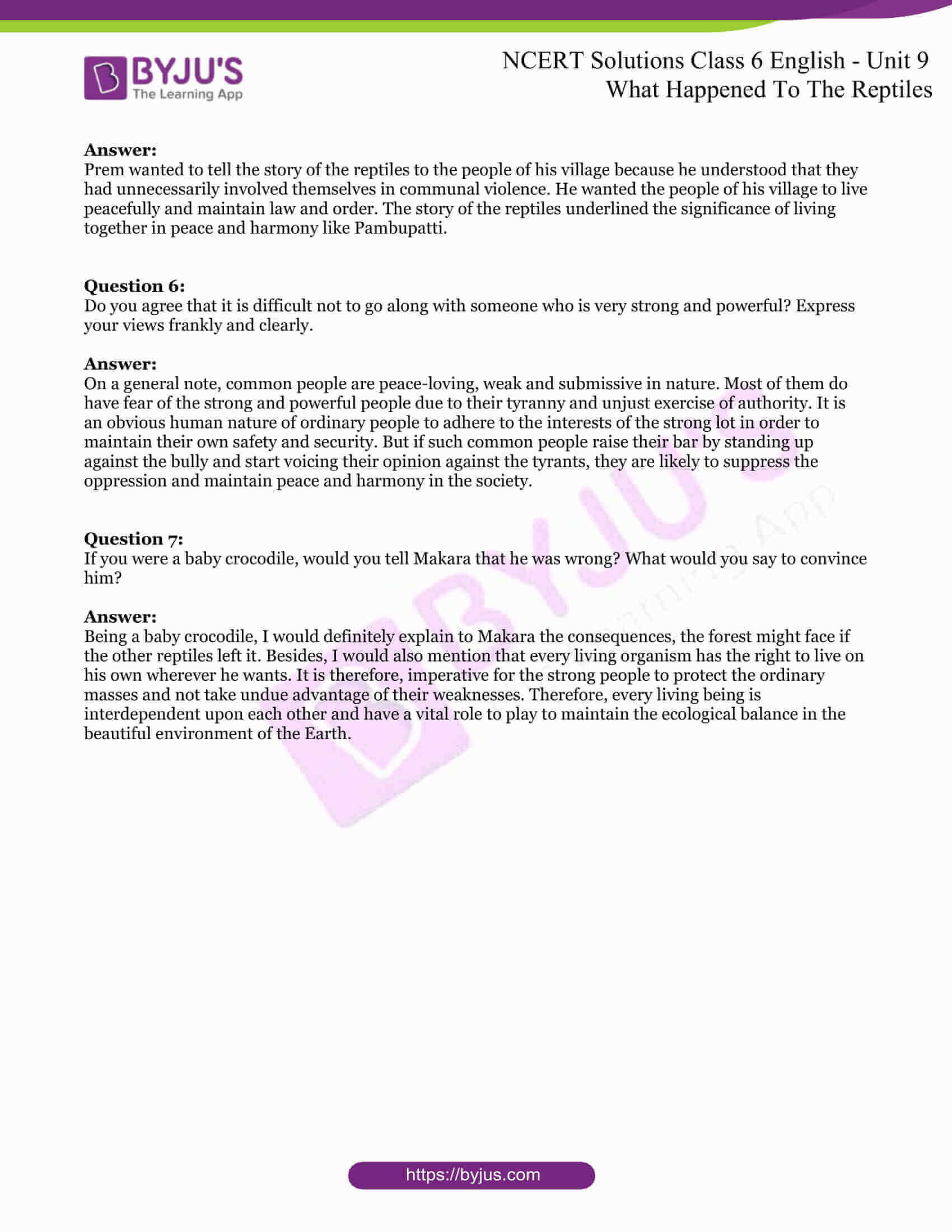 What Happened To The Reptiles

In what way is Pambupatti different from any other village?

People in Pambupatti lived peacefully as they did not fight or get involved in communal riots in the name of religion or language. This proved that Pambupatti was not like any other village, but different from them.

Why is Prem determined not to return to his village?

Prem was determined not to return to his village because communal riots of hate and violence was happening in his village. He and other villagers felt that it was unsafe for them to reside in the village where houses were being burnt in fire and people were killing each other and getting involved in communal violence.

Why did Makara dislike tortoises, snakes and lizards? Write a line about each.

Makara disliked tortoises because they were slow and stupid, who carried their houses on their backs.

Makara disliked snakes because they were slimy, made funny noises and were poisonous in nature.

Makara disliked lizards because they had the strangest habits such as changing colour which made them unreliable.

What went wrong when the tortoises, snakes and lizards left the forest?

When the tortoises, snakes and lizards left the forest, it was going through a tough phase. The forest filled with a rotting smell of fruits and animals due to the absence of the tortoises. Once the snakes left, the forest was taken over by the rats as there was no one to eat them. Finally, the nasty insects grew bigger and multiplied in millions due to the absence of the lizards.

Why do you think Prem wants to tell the story of the reptiles to the people of his village?

Prem wanted to tell the story of the reptiles to the people of his village because he understood that they had unnecessarily involved themselves in communal violence. He wanted the people of his village to live peacefully and maintain law and order. The story of the reptiles underlined the significance of living together in peace and harmony like Pambupatti.

Do you agree that it is difficult not to go along with someone who is very strong and powerful? Express your views frankly and clearly.

On a general note, common people are peace-loving, weak and submissive in nature. Most of them do have fear of the strong and powerful people due to their tyranny and unjust exercise of authority. It is an obvious human nature of ordinary people to adhere to the interests of the strong lot in order to maintain their own safety and security. But if such common people raise their bar by standing up against the bully and start voicing their opinion against the tyrants, they are likely to suppress the oppression and maintain peace and harmony in the society.

If you were a baby crocodile, would you tell Makara that he was wrong? What would you say to convince him?

Being a baby crocodile, I would definitely explain to Makara the consequences, the forest might face if the other reptiles left it. Besides, I would also mention that every living organism has the right to live on his own wherever he wants. It is therefore, imperative for the strong people to protect the ordinary masses and not take undue advantage of their weaknesses. Therefore, every living being is interdependent upon each other and have a vital role to play to maintain the ecological balance in the beautiful environment of the Earth.