What are minerals? A naturally occurring substance with a definite chemical composition is called a mineral. Minerals are not evenly distributed over space but are concentrated in a particular area or rock formations. Did you know that the salt in your food and graphite in your pencil are also minerals? Students can explore further about the various types of minerals and power resources from Chapter 3 of NCERT Class 8 Geography book. NCERT Solutions for Class 8 Geography Chapter 3 Mineral and Power Resources contain solutions to the exercises given in the Geography book-Resources and Development. These NCERT Solutions of the exercises provided by BYJU’s help students to prepare for the exams.

Students can download the NCERT Solutions for Class 8 Geography PDF below. 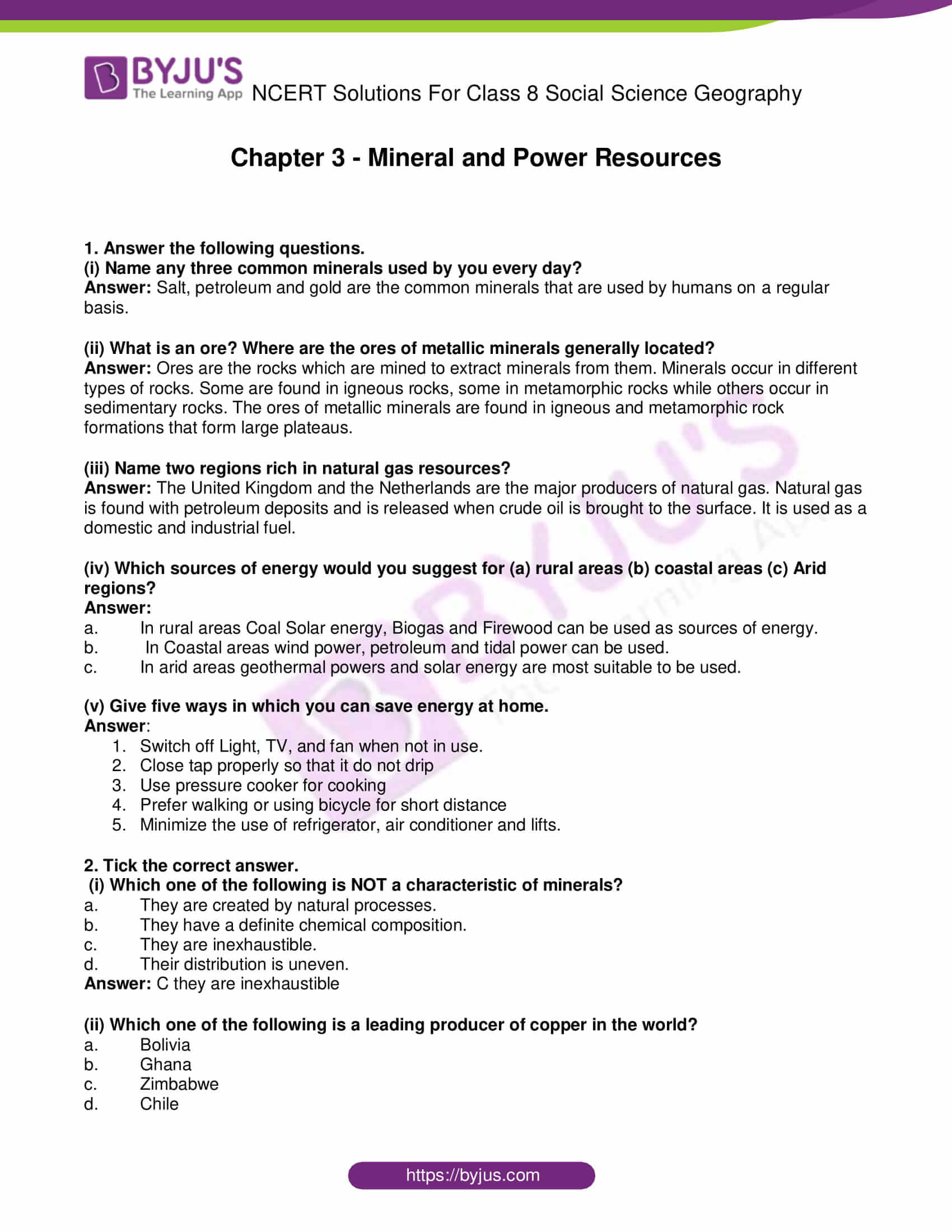 (i) Name any three common minerals used by you every day?

Answer: Salt, petroleum and gold are the common minerals that are used by humans on a regular basis.

(ii) What is an ore? Where are the ores of metallic minerals generally located?

Answer: The United Kingdom and the Netherlands are the major producers of natural gas. Natural gas is found with petroleum deposits and is released when crude oil is brought to the surface. It is used as a domestic and industrial fuel.

(iv) Which sources of energy would you suggest for (a) rural areas (b) coastal areas (c) Arid regions?

(a) In rural areas – coal, solar energy, bio-gas and firewood can be used as sources of energy.

(b) In coastal areas – wind power, petroleum and tidal power can be used.

(C) In arid areas, geothermal powers and solar energy are the most suitable sources of energy to be used.

(v) Give five ways in which you can save energy at home.

(i) Which one of the following is NOT a characteristic of minerals?

(a) They are created by natural processes.

(b) They have a definite chemical composition.

(c) They are inexhaustible.

(d) Their distribution is uneven.

Answer: (c) They are inexhaustible

(ii) Which one of the following is a leading producer of copper in the world?

(iii) Which one of the following practices will NOT conserve LPG in your kitchen.

(a) Cooking food in an open pan, kept on low flame.

(b) Soaking the dal for some time before cooking it.

(d) Keeping the vegetables chopped before lighting the gas for cooking.

Answer: (a) Cooking food in an open pan, kept on low flame

(i) Environmental aspects must be carefully looked into before building huge dams.

Answer: Construction of a huge dam creates large scale destruction of natural vegetation and wildlife in those areas, which get submerged. This is not good for the ecosystem. Hence, environmental aspects must be carefully looked into, before building huge dams.

(ii) Most industries are concentrated around coal mines.

Answer: Coal is an important source of energy and hence most of the industries are located around coal mines.

(iii) Petroleum is referred to as “black gold”.

Answer: Petroleum is a thick black liquid and is a valuable resource for various industries. Hence, it is also known as “Black Gold”.

Answer: Quarrying creates many problems. Fine dust particles spread in the air around a quarrying site. Dust particles from quarry can cause respiratory problems. Quarrying also destroys natural vegetation and thus the home of many wild animals.

4. Distinguish between the following.

Answer: The gaseous fuel formed from the conversion of organic waste such as dead plant, animal material, animal dung and kitchen waste is called biogas. Biogas is a mixture of methane and carbon dioxide and produces a huge amount of organic manure each year. Whereas, natural gas is extracted with petroleum deposits when crude oil is brought to the surface.

Types of Minerals: On the basis of composition, minerals are classified into metallic and nonmetallic types.