NCERT Solutions for Class 8 History Chapter 2 – From Trade to Territory The Company Establishes Power contains the solutions to the exercises given in the History book – ‘Our Pasts-III’. NCERT Solutions to the exercises are provided, which will be useful for school exams, as they are sourced from the NCERT textbooks. The NCERT solutions are easy and accurate, which will align school students’ preparation with the questions asked in the examinations.

Chapter 2 From Trade To Territory The Company Establishes Power 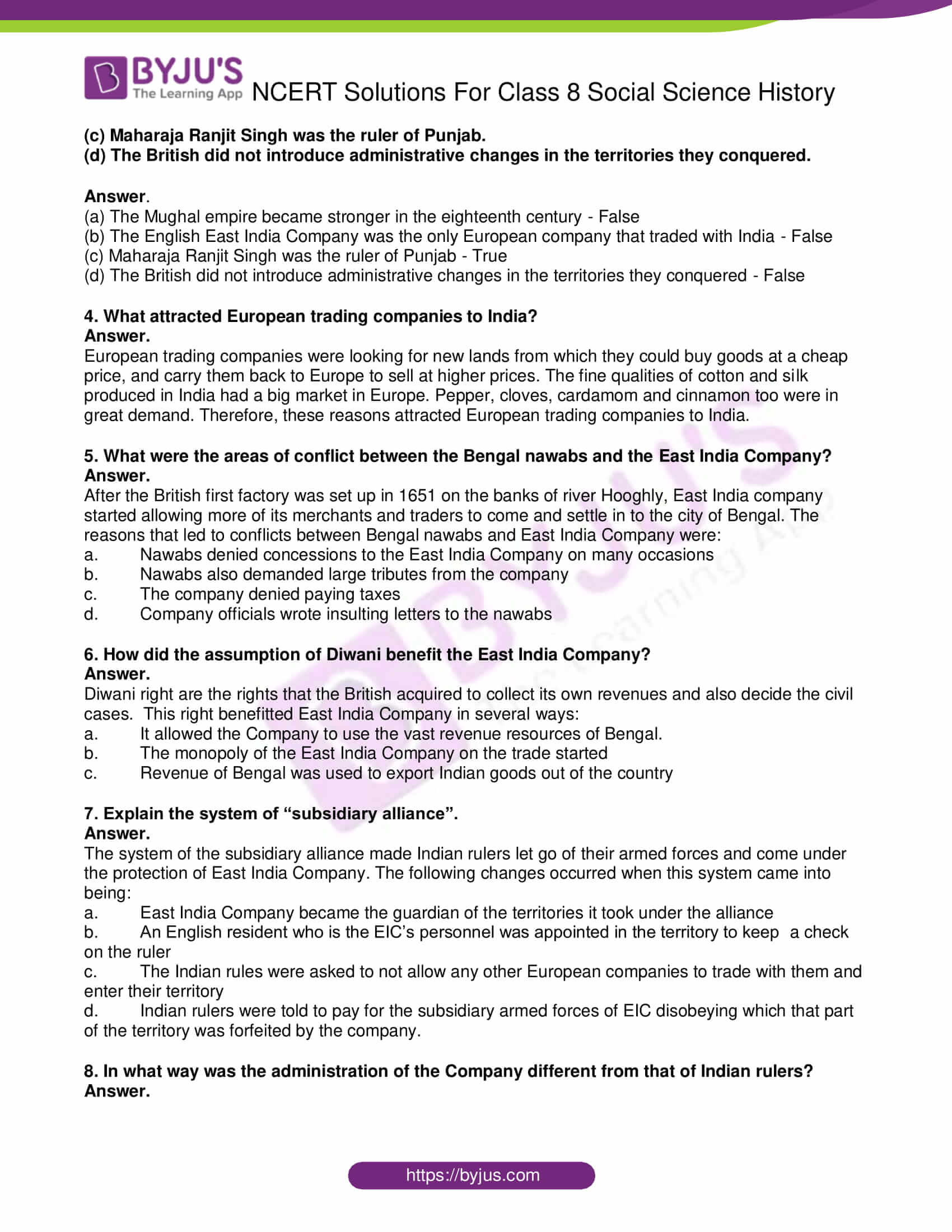 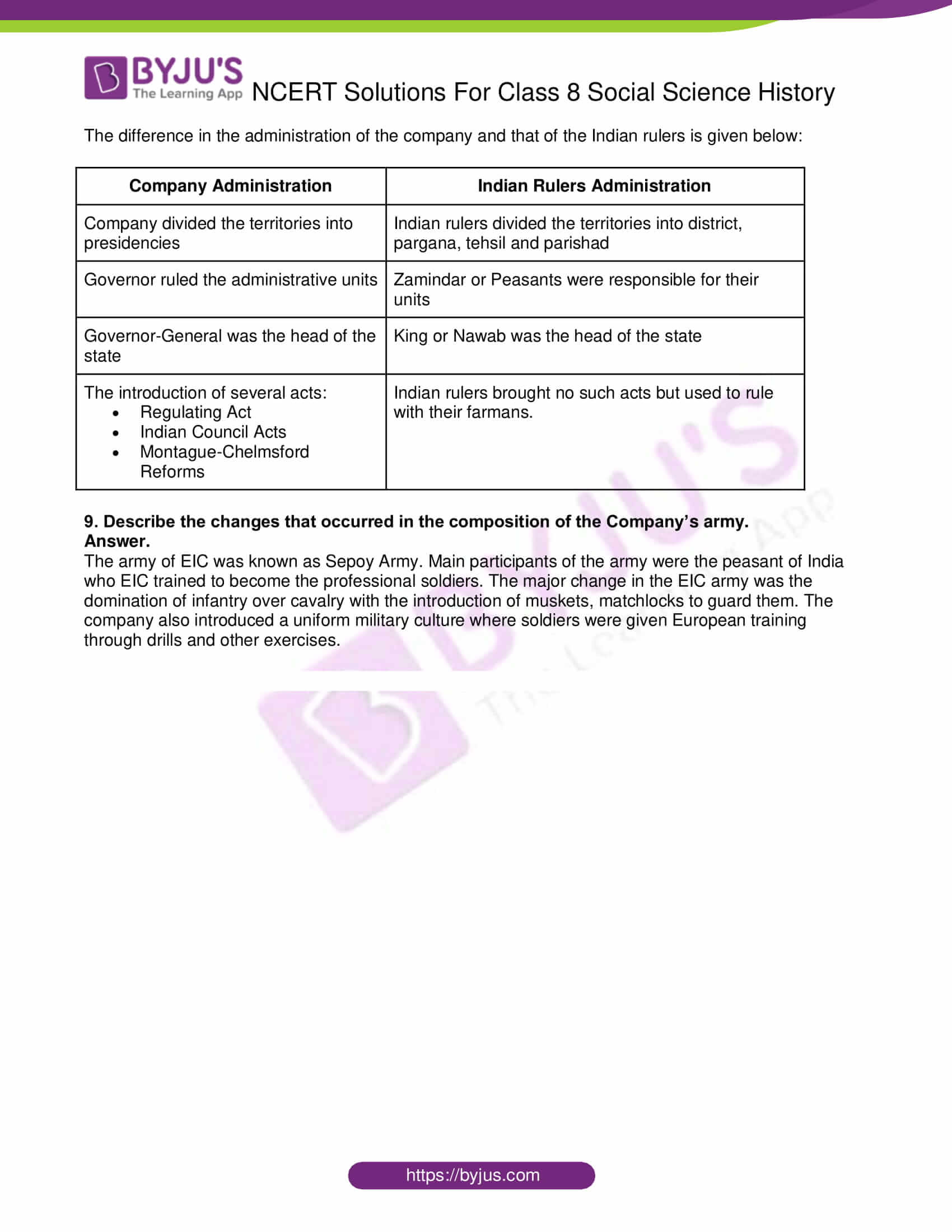 The solutions for chapter 2 of ‘Our Pasts-III’ are given below. Students should also check NCERT Solutions for Class 8 for other subjects.

(b) Haidar Ali and Tipu Sultan were the rulers of Mysore.

(d) Maratha kingdoms were located mainly in the South-western part of India.

(a) The Mughal empire became stronger in the eighteenth century.

(b) The English East India Company was the only European company that traded with India.

(c) Maharaja Ranjit Singh was the ruler of Punjab.

(d) The British did not introduce administrative changes in the territories they conquered.

(a) The Mughal empire became stronger in the eighteenth century – False

(c) Maharaja Ranjit Singh was the ruler of Punjab – True

European trading companies were looking for new lands from which they could buy goods at a cheap price and carry them back to Europe to sell at higher prices. The fine qualities of cotton and silk produced in India had a big market in Europe. Spices like Pepper, cloves, cardamom and cinnamon too were in great demand. These were the reasons that attracted European trading companies to India.

5. What were the areas of conflict between the Bengal nawabs and the East India Company?

After the first British factory was set up in 1651 on the banks of the river Hooghly, East India company started allowing more of its merchants and traders to visit and settle down at the city of Bengal. The reasons that caused the conflicts between Bengal nawabs and East India Company were:

a. Nawabs denied concessions to the East India Company on many occasions

b. Nawabs also demanded large tributes from the company

d. The company officials wrote insulting letters to the nawabs

6. How did the assumption of Diwani benefit the East India Company?

Diwani rights are the rights that the British acquired to collect their own revenues and have the authority to decide on civil cases. This right benefited East India Company in several ways:

a. It allowed the Company to use the vast revenue resources of Bengal

b. The monopoly of the East India Company on the trade started

c. Revenue of Bengal was used to export Indian goods out of the country

7. Explain the system of “subsidiary alliance”.

The system of the subsidiary alliance made Indian rulers let go of their armed forces and come under the protection of East India Company. The following changes occurred when this system came into being:

a. East India Company became the guardian of the territories that it took under the alliance

b. An English resident, who served as the EIC’s personnel, was appointed in the territory to keep a check on the ruler

c. The Indian rules were asked not to allow any other European companies to trade with them and enter their territory

d. Indian rulers were told to pay for the subsidiary armed forces of the EIC, disobeying which led to that part of the territory being forfeited by the company

8. In what way was the administration of the Company different from that of Indian rulers?

The difference in the administration of the company and that of the Indian rulers is given below:

9. Describe the changes that occurred in the composition of the Company’s army.

The army of EIC was known as Sepoy Army. The main participants of the army were the peasants of India, trained by the EIC to become professional soldiers. The major change in the EIC army was the domination of infantry over cavalry with the introduction of muskets, matchlocks to guard them. The company also introduced a uniform military culture where soldiers were given European training through drills and other exercises.

From Trade to Territory The Company Establishes Power Summary

Chapter 2 of ‘Our Pasts-III’ deals with the advent of European power in India. It talks about how the Mughal empire fell with the death of Aurangzeb and how the Nawabs started disintegrating with the Mughal empire. Students will also read about how East India Company got the royal charter to trade with India and how later, the Battle of Plassey and Buxar changed its role in Indian society. Starting with its establishment of the first factory in Hooghly river and with the introduction of land revenue systems such as Subsidiary Alliance, East India Company slowly and steadily started acquiring Indian territories.

Students should read the chapters under the following heads:

b. How trade led to battles

c. The Battle of Plassey

a. Tipu Sultan – The “Tiger of Mysore”

b. War with the Marathas

c. The claim to paramountcy

d. The Doctrine of Lapse

a. The Company army