Mathematical numbers used in comparing two things which are similar to each other in terms of units are ratios. A ratio can be written in three different ways viz, x to y, x: y and

Comparing things similar to each other is the concept of ratio. And when two ratios are the same, they are said to be in proportion to each other. It is represented by the symbol ‘::’ or ‘=’.

Introduction to Ratio and Proportion

Two quantities are in the golden ratio if their ratio is the same as the ratio of their sum to larger of the two quantities.

Example: Father’s age is 75 years and the daughter’s age is 25 years.

Difference between fractions and ratios

For More Information On Difference Between Fractions And Ratios, Watch The Below Video. 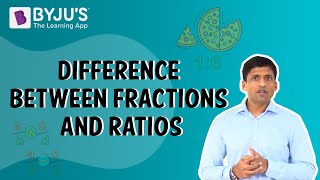 Here, both the above ratios are equal.

To know more about Comparison of Ratios, visit here.

When the given ratios are equal, then these ratios are called as equivalent ratios.

The method in which first we find the value of one unit and then the value of required number of units is known as Unitary Method.

If two ratios are equal, then they are said to be in proportion.

Uses of ratios and proportions

To know more about Ratios and Proportion, visit here.

What is the ‘Golden ratio’?

What is known as the ‘Unitary method’?

The unitary method is a process of finding the value of a single unit. Based on this value, the value of the required number of units are found

What is meant ‘Fraction’?

A fraction represents a part of a whole or, more generally, any number of equal parts.