Cubes and Cube Roots Class 8 Notes given here come in an easy to understand format and students can quickly go through all the topics given in chapter 7. The notes will help students to understand and remember the concepts better and prepare well for the exams.

For More Information On Cube Numbers, Watch The Below Video. In geometry, a cube is a solid figure where all edges are equal and are perpendicular to each other.

For example, take a cube of unit side. If we arrange these cubes to form a bigger cube of side 3 units, we find that there are a total of 27 such unit cubes that make up a cube of 3 units. Similarly, a cube of 4 units will have 64 such unit cubes.

In the prime factorisation of any number, if each prime factor appears three times, then the number is a perfect cube.

To know more about Finding the Cube of a Number, visit here.

For More Information On Cube Roots, Watch The Below Video. 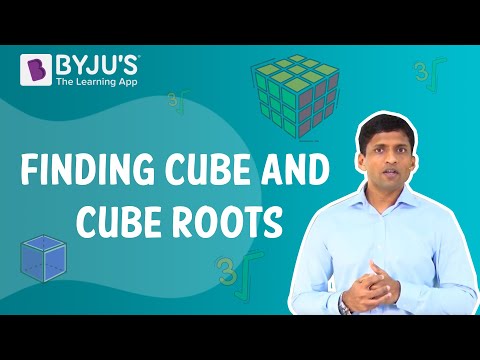 Finding the cube root is the inverse operation of finding the cube.
We know that 33=27. We can also write the same equation as 3√27=3. The symbol ‘3√‘ denotes ‘cube root‘.

We can find the cube root of a number by prime factorisation method by the following steps:

If a cube number is given we can find out its cube root using the following steps:

Differences of Squares of Triangular Numbers and Converse

Triangular numbers: It is a sequence of the numbers 1, 3, 6, 10, 15 etc. It is obtained by continued summation of the natural numbers. The dot pattern of a triangular number can be arranged as triangles.
​​​​​​
Sum of two consecutive triangular numbers gives us a square number. For example, 1+3=4=22 and 3+6=9=32.

Also, if the difference between the squares of two numbers is a cube number, then these numbers are consecutive triangular numbers.

What are ‘cube numbers’?

A cube number is a number multiplied by itself 3 times.

What are ‘consecutive triangular numbers’?

Units digit of a number is the digit in the one’s place of the number.