CBSE Class 8 History Chapter 7 – Civilising the Native, Educating the Nation will help students understand the implication British rule had on the lives of students. The British in India wanted not only territorial conquest and control over revenues. They also felt that they had a cultural mission: they had to “civilise the natives”, change their customs and values. Students can understand the concepts of this chapter thoroughly by referring to CBSE Class 8  History notes of Chapter 7, provided below in downloadable PDF format.

How the British saw Education

The tradition of Orientalism

In 1783, William Jones arrived in Calcutta, appointed as a junior judge at the Supreme Court. Jones was a linguist who had studied Greek and Latin at Oxford and knew French, English, Arabic and Persian. At Calcutta, he learnt the subtleties of Sanskrit language, grammar and poetry from pandits. He also studied ancient Indian texts on law, philosophy, religion, politics, morality, arithmetic, medicine and the other sciences.

Henry Thomas Colebrooke and Nathaniel Halhed were also interested in the ancient Indian heritage, to master the Indian languages and to translate Sanskrit and Persian works into English. Jones along with them set up the Asiatic Society of Bengal and started a journal called Asiatick Researches.

Jones and Colebrooke felt that the Indian civilisation had attained its glory in the ancient past, but had subsequently declined. To understand India better, it was necessary to discover the sacred and legal texts that were produced in the ancient period. Jones and Colebrooke went on discovering ancient texts, understanding their meaning, translating them, and making their findings known to others. This project will help Indians rediscover their own heritage, and understand the lost glories of their past.

The Company officials felt that institutions should encourage the study of ancient Indian texts and Sanskrit and Persian literature and poetry. Hindus and Muslims should learn what they were already familiar with, and what they valued and treasured.

In 1781, a madrasa was set up in Calcutta to promote the study of Arabic, Persian and Islamic law; and the Hindu College was established in Benaras in 1791 to encourage the study of ancient Sanskrit texts that would be useful for the administration of the country.

For More Information On Education in British India 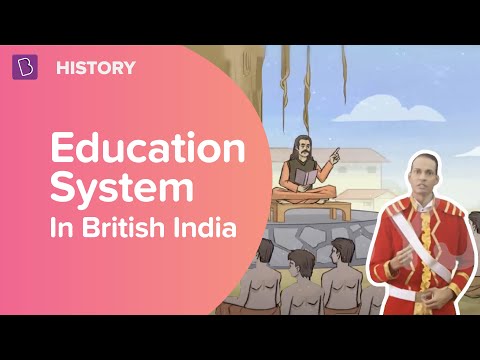 “Grave errors of the East”

The British officials started criticising the Orientalist vision of learning and said that knowledge of the East was full of errors and unscientific thought. Eastern literature was non-serious and light-hearted. James Mill was one of those who attacked the Orientalists. The aim of education should be to teach what was useful and practical. So Indians should be familiar with the scientific and technical advances that the West had made.

Thomas Babington Macaulay saw India as an uncivilised country that needed to be civilised. He urged that the British government in India should stop wasting public money in promoting Oriental learning, for it was of no practical use. Macaulay thought English language would help Indians to read some of the finest literature the world had produced; make them aware of the developments in Western science and philosophy. The English Education Act of 1835 was introduced and English was made the medium of instruction for higher education. English textbooks began to be produced for schools.

In 1854, the Court of Directors of the East India Company in London sent an educational dispatch to the Governor-General in India. It was issued by Charles Wood, the President of the Board of Control of the Company, known as Wood’s Despatch. It draws an outline of the educational policy that was to be followed in India, and emphasised on the practical benefits of a system of European learning, as opposed to Oriental knowledge.

The British introduced several measures, following the 1854 Despatch. Education departments of the government were set up to extend control over all matters regarding education. Steps were taken to establish a system of university education. In 1857, universities were being established in Calcutta, Madras and Bombay. Attempts were also made to bring about changes within the system of school education.

What Happened to the Local Schools?

The report of William Adam

In the 1830s, William Adam toured the districts of Bengal and Bihar and had been asked by the Company to report on the progress of education in vernacular schools.

According to the report presented by Adam, over 1 lakh, pathshalas were present in Bengal and Bihar with no more than 20 students each. These institutions were set up by wealthy people, or the local community. The education system was flexible with no fixed fee, no printed books, no separate school building, no benches or chairs, no blackboards, no system of separate classes, no roll call registers, no annual examinations, and no regular time-table.

Classes were held under a banyan tree, in the corner of a village shop or temple, or at the guru’s home. School fees depended on the income of the parents: the rich had to pay more than the poor. The guru decided what to teach, orally in accordance with the needs of the students. Students were sat together in one place and the guru interacted separately with groups of children with different levels of learning.

This flexible system was suited to local needs. During the harvest time classes were not held. The pathshala started once again when the crops had been cut and stored.

The Company was concerned primarily with higher education. After 1854 the Company decided to improve the system of vernacular education by introducing order within the system, imposing routines, establishing rules, ensuring regular inspections.

The Company appointed a number of government pandits, gave them charge of four to five schools. The task of the pandit was to visit the pathshalas and try and improve the standard of teaching. Each guru was asked to submit periodic reports and take classes according to a regular timetable. Teaching was based on textbooks and learning was to be tested through a system of annual examination. Students were asked to pay a regular fee, attend regular classes, sit on fixed seats, and obey the new rules of discipline.

Pathshalas which accepted the new rules were supported through government grants. The consequence of new rules and routines was earlier children from poor peasant families had been able to go to pathshalas, since the timetable was flexible. The new system demanded regular attendance, even during harvest time when children of poor families had to work in the fields.

The Agenda for a National Education

Before the British officials, many thinkers from different parts of India began to talk of the need for a wider spread of education. Some Indians felt that Western education would help modernise India and urged the British to open more schools, colleges and universities, and spend more money on education. There were other Indians who reacted against Western education. Mahatma Gandhi and Rabindranath Tagore were two such individuals.

“English education has enslaved us”

According to Mahatma Gandhi, Western civilisation created a sense of inferiority in the minds of Indians. It made the Indians perceive it as superior and destroyed the pride they had in their own culture. Indians educated in these institutions began admiring British rule. Mahatma Gandhi wanted an education that could help Indians recover their sense of dignity and self-respect. During the national movement, he urged students to leave educational institutions in order to show to the British that Indians were no longer willing to be enslaved.

Education in English distanced Indians from their own social surroundings, and made them “strangers in their own lands”. Mahatma Gandhi said that education ought to develop a person’s mind and soul. Literacy did not count as education. As nationalist sentiments spread, other thinkers also began thinking of a system of national education, which would be radically different from that set up by the British.

Rabindranath Tagore started Shantiniketan in 1901. During his childhood days, he found school suffocating and oppressive. So, after growing up he wanted to establish a school where the child was happy, free and creative, and able to explore his own thoughts and desires. He felt that childhood ought to be a time of self-learning, outside the rigid and restricting discipline of the schooling system set up by the British. According to Tagore, the existing schools killed the natural desire of the child to be creative, along with his sense of wonder.

Tagore said that creative learning could be encouraged only within a natural environment. Gandhiji was against Western civilisation and its worship of machines and technology. Tagore, on the other hand, wanted to combine elements of modern Western civilisation with the best Indian tradition. He emphasised the need to teach science and technology at Shantiniketan, along with art, music and dance.

Many individuals and thinkers were thinking of a way as to how the national educational system could be fashioned. Some wanted changes within the system set up by the British and felt that the system could be extended to include wider sections of people. Others urged that alternative systems be created so that people were educated into a culture that was truly national.

Who was William Adam?

William Adam was a British Baptist minister, missionary, abolitionist and a Harvard professor.

What is Shantiniketan famous for?

Shantiniketan, a veritable abode of peace and tranquility, is famous for the world renowned Viswa Bharati University founded by Rabindranath Tagore in 1921.

What is the meaning of ‘National education’?

The National Policy on Education (NPE) is a policy formulated by the Government of India to promote and regulate education in India.