A 4 sided polygon bounded by 4 finite line segments is known as a quadrilateral. The word ‘quadrilateral’ is composed of two Latin words, quadri meaning ‘four ‘and latus meaning ‘side’. Hence, it is a two dimensional figure having four sides (or edges) and four vertices.

A diagonal is a line segment connecting the 2 non-consecutive vertices of a polygon. As it is known that based on diagonals, polygons can be classified as convex and concave. 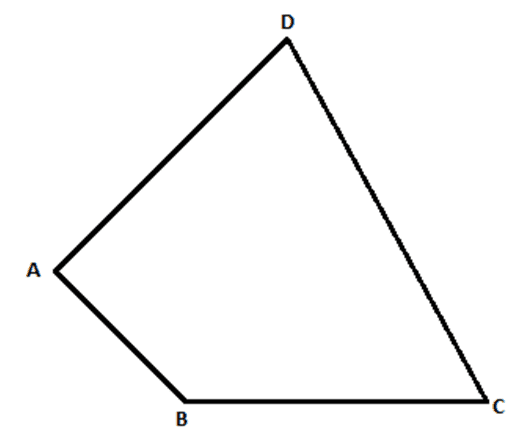 Thus, it can be seen that the sum of interior angles in a quadrilateral is always 360°.

Based on lengths of sides and angles, types of convex quadrilaterals are:

Let us now consider higher order polygons and try to figure out the sum of their interior angles. Consider a pentagon as shown:

In pentagon PQRST, diagonals PR and PS divide the polygon into three triangles.

It can be seen that:

Adding the above three equations, we get:

Consider a hexagon ABCDEF as shown and the sum of its interior angles can be figured out in similar way: In hexagon ABCDEF, diagonals AC,AD and AE divide the polygon into four triangles.

So, the property can be generalized as:

Also, for any n-sided polygon, the sum of exterior angles of any polygon is always 360°.

Thus for a regular polygon, measure of each exterior angle (∅) is given as: