NCERT Solutions for Class 7 Civics Chapter 5 “Women Change the World” are available here for free downloading in PDF format. Also, we have provided the answers on the page itself. Students who are finding it difficult to answer the exercise question are advised to go through these NCERT Solutions. Referring to these solutions will help in understanding how much to write for a particular question, depending on its marks allocation. Moreover, students will get to learn a better way of expressing their answers in the exam. 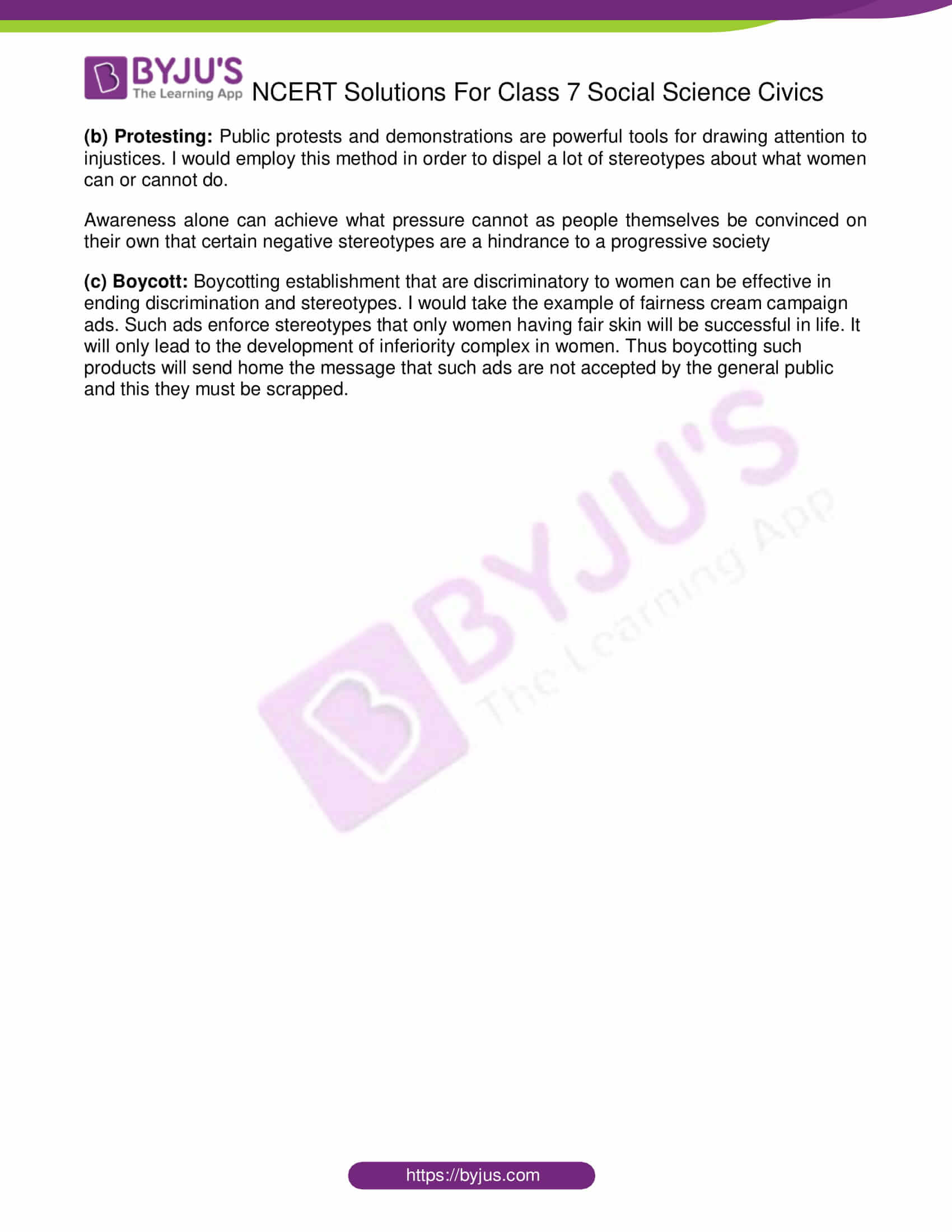 The solutions for chapter 5, Women Change the World are given below. Students should also check NCERT Solutions for Class 7 for other subjects.

1. How do you think stereotypes, about what women can or cannot do, affect women’s right to equality?

Solution: Rigorous social conditioning has enforced the stereotype that women are considered inferior to men. It is a prevalent belief that women do not have the technical mind to be engineers and scientists and that they are only fit for professions like teaching and nursing. This stereotype about which profession they can or cannot pursue hinders the fight for women’s equality. It is also a reason why they are paid less than their male counterparts.

2. List one reason why learning the alphabet was so important for women like Rashundari Devi, Ramabai and Rokeya.

Solution: It was by learning the alphabet that women like Rashundari Devi, Ramabai and Rokeya were able to write letters, stories and autobiographies which describes their own struggle against inequality prevalent in society.

3. “Poor girls drop out of school because they are not interested in getting an education”. Re-read the last paragraph on page 62 and explain why this statement is not true.

Solution: Poor girls do not leave school because they want to, but rather they are compelled to leave for a wide variety of reasons. In rural and certain backward areas of the country, schools lack basic infrastructure such as buildings, blackboards, stationary etc. Also, teachers are not available on a regular basis. At times, parents of the girls also feel that it is not important to educate a girl child, as they think a girl’s ultimate goal is to be married. Thus, they are even less willing to spend money on sending their daughters to schools.

4. Can you describe two methods of struggle that the women movements used to raise issues? If you had to organize a struggle against stereotypes, about what women can or cannot do, what method would you employ from the ones that you have read about? Why would you choose this particular method?

Solution: The women’s movement used several methods to raise issues. Three of them are:

(a) Campaigning: It is an important part of the women’s movement, as it fights discrimination and women-related violence. Campaigns have also led to new laws being passed. One notable example is a law being passed in 2006 that gives legal protection to women who are victims of domestic violence. A similar campaign in the late ’90s gave birth to a law that protected women from sexual harassment at the workplace.

(b) Protesting: Public protests and demonstrations are powerful tools for drawing attention to injustices. I would employ this method in order to dispel a lot of stereotypes about what women can or cannot do. Awareness alone can achieve what pressure cannot, as people themselves be convinced on their own that certain negative stereotypes are a hindrance to a progressive society

(c) Boycott: Boycotting the establishments that are discriminatory to women can be effective in ending discrimination and stereotypes. I would take the example of fairness cream campaign ads. Such advertisements reinforce stereotypes that only women having fair skin will be successful in life. It will only lead to the development of inferiority complexes in women. Thus boycotting such products will send home the message that such ads are not accepted by the general public and that they must be scrapped.