The term media refers to the communication channels through which news, music, movies, education, promotional messages, and other data reach the common people. In this chapter, students will learn what an independent media means and how the media plays a vital role in setting up the agendas. In the exercise, there are 5 questions, and we have provided the answers to 4 questions in NCERT Solutions for Class 7 Civics Chapter 6 “Understanding Media”. The last question is based on a project, so students need to work on it by themselves. The solutions for chapter 6, Understanding Media are given below. Students should also check NCERT Solutions for Class 7 for other subjects.

1. In what way does the media play an important role in a democracy?

Solution: Media plays an important role in democracy, as it provides news and details of events taking place around the country and all over the world. It also acts as a watchdog to the conduct of the government by:

2. Can you give this diagram a title? What do you understand about the link between media and big business from this diagram? 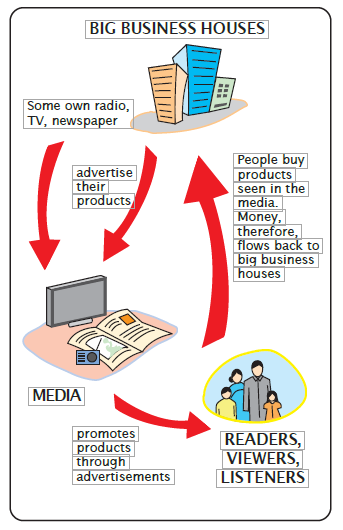 Solution: Title can be given as – “Influence of Big Business Houses on Media”. Big businesses and corporations approach the media to sell their products through them. This is the most effective and cheapest way to reach the masses and ultimately influence their decisions regarding the purchase of these products.

3. You read about the ways in which the media ‘sets the agenda’. What kind of effect does this have in a democracy? Provide two examples to support your point of view.

Solution: Media creates and influences public opinion in a democracy. It can influence public opinion for or against any issue. Although the scenario has changed, as it forms public opinion in favour of the highest bidder or those in power. The neutrality, it is supposed to showcase, has completely disappeared in its quest to bring in more viewers and profits.

One example of this can be of your own school event having its annual day celebrations, but there is no coverage by the media as there is no famous personality attending the event. Thus, it highlights the selective attitude of the media.

A positive aspect of this can be of the recent example of the media finding out about alarming levels of pesticides present in cola drinks. They published reports that indicated a high level of pesticides and made the public aware of the importance of monitoring the quality of these cola drinks in accordance with international quality and safety standards. This was done despite the government unabashedly declaring the cola drinks safe to drink. Public outcry over this made the government retract its statement and order an inquiry into the quality standards of the drink.

4. As a class project, decide to focus on a particular news topic and cut out stories from different newspapers on this. Also, watch the coverage of this topic on TV news, compare two newspapers and write down the similarity – and differences in their reports. It might help to ask the following questions:

(a) What information is this article providing?

(b) What information is it leaving out?

(c) From whose point of view is the article being written?

(d) Whose point of view is being left out and why?

Answer: Students are suggested to this project by themselves.