Our Earth is a dynamic planet. It constantly undergoes changes inside and outside. The interior of the Earth consists of crust, mantle and core. The earth’s crust is made up of various types of rocks. There are three major types of rocks: igneous rocks, sedimentary rocks and metamorphic rocks. Minerals are naturally occurring substances which have certain physical properties and definite chemical composition. For students, NCERT Solutions for Class 7 Geography is undoubtedly one of the best learning and reference tools to safely rely on for all the answers to the textbook questions.

Chapter 2: Inside Our Earth

Students can also get the NCERT Solutions for Class 7 for other subjects at the linked article. 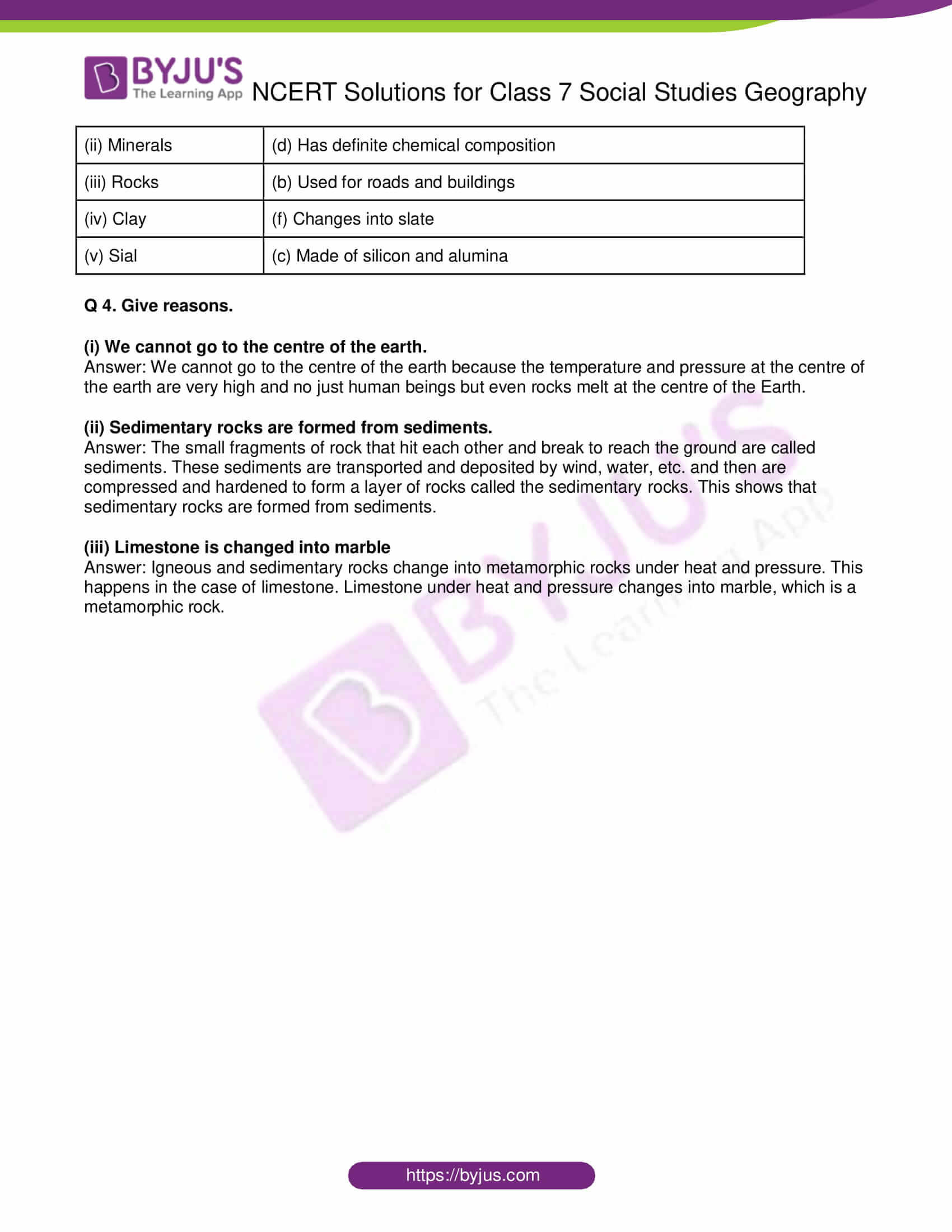 (i) What are the three layers of the earth?

Answer: the three layers of earth are :

Answer: the three types of rocks are:

(iv) How are extrusive and intrusive rocks formed?

Answer: The molten lava comes out of volcanoes, reaches the earth’s surface and cools down rapidly to become a solid piece of rock. This is how extrusive rocks are formed. For example – basalt.

When the molten lava solidifies deep inside the earth’s crust, the rocks so formed are called intrusive rocks. For example – granite.

(v) What do you mean by a rock cycle?

Answer: The process of transformation of rocks from one type to another, due to changes in certain conditions in a cyclic manner, is called a rock cycle.

(vi) What are the uses of rocks?

(vii) What are metamorphic rocks?

Answer: The type of rocks formed when igneous and sedimentary rocks experience heat and pressure are called metamorphic rocks.

(i) The rock which is made up of molten magma is

(ii) The innermost layer of the earth is

(iii) Gold, petroleum and coal are examples of

(iv) Rocks which contain fossils are

(v) The thinnest layer of the earth is

(i) We cannot go to the centre of the earth.

Answer: The small fragments of rock that hit each other and break to reach the ground are called sediments. These sediments are transported and deposited by wind, water, etc. and then are compressed and hardened to form a layer of rocks called the sedimentary rocks. This shows that sedimentary rocks are formed from sediments.

(iii) Limestone is changed into marble

Inside Our Earth Summary

Chapter 2 – Inside Our Earth from the NCERT geography book discusses:

The NCERT Geography book for class 7 is Our Environment and students can get solutions for all the chapters at BYJU’S. For NCERT Solutions for Class 7 Social Sciences, visit the linked article.