Air is all around us. It’s a mixture of different gases. The air in Earth’s atmosphere is made up of approximately 78 percent nitrogen and 21 percent oxygen. Our atmosphere is divided into five layers starting from the earth’s surface. The five layers are Troposphere, Stratosphere, Mesosphere, Thermosphere and Exosphere. Weather is this hour-to-hour, day to day condition of the atmosphere. The average weather condition of a place for a longer period of time represents the climate of a place. For students of Class 7, NCERT Solutions for Class 7 Geography provides a strong foundational knowledge of the chapters and will play a prominent role while preparing for the final exam.

Students can also get the NCERT Solutions for Class 7 for other subjects at the linked article. 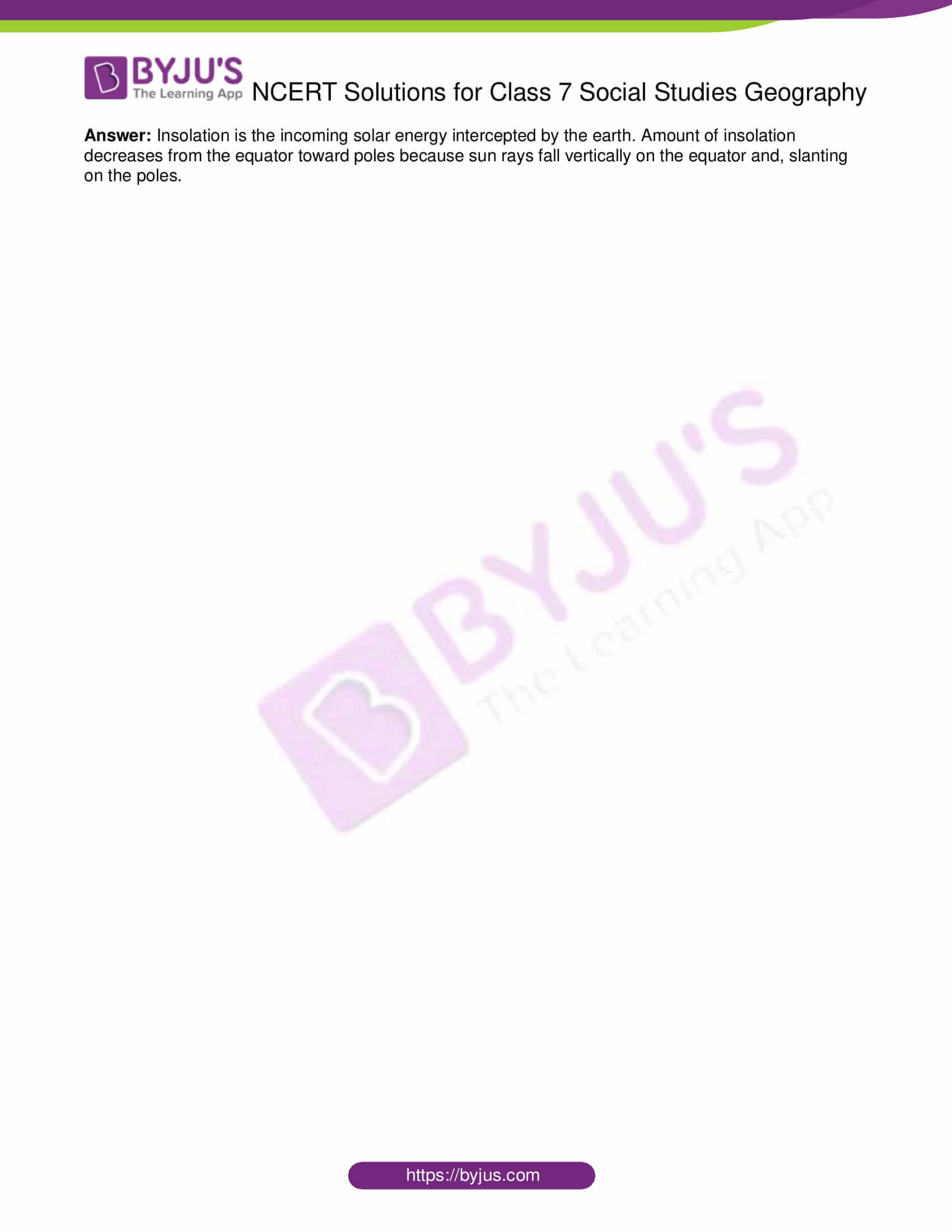 (i) What is the atmosphere?

Answer: The blanket of air surrounding the earth is called the atmosphere. The atmosphere primarily comprises nitrogen and oxygen in bulk and other gases like carbon dioxide, helium, ozone, etc in lesser quantities. All living beings on earth depend on the atmosphere for their survival.

(ii) Which two gases make the bulk of the atmosphere?

Answer: The two gases that make the bulk of the atmosphere are:

(iii) Which gas creates a greenhouse effect in the atmosphere?

Answer: Carbon dioxide is the gas that creates the greenhouse effect in the atmosphere.

(iv) What is the weather?

Answer: The hour to hour or the day to day condition of the atmosphere is called weather. Weather can change dramatically from day-to-day. It may be classified as hot, dry, cold or wet.

Answer: The three types of rainfall are as follows:

(vi) What is air pressure?

Answer: Air pressure is defined as the pressure exerted by the weight of air on the earth’s surface. The air pressure decreases as height increases and is the highest at the sea level.

(i) Which of the following gases protects us from harmful sun rays?

(ii) The most important layer of the atmosphere is

(iii) Which of the following layers of the atmosphere is free from clouds?

(iv) As we go up the layers of the atmosphere, the pressure

(v) When precipitation comes down to the earth in the liquid form, it is called

(i) Wet clothes take longer time to dry on a humid day?

Answer: Wet clothes take longer time to dry on a humid day because the amount of water in the air is more on a humid day than on a sunny day. Due to which, the rate of evaporation decreases and air soaks in less water from the clothes.

(ii) Amount of insolation decreases from the equator towards poles?

Answer: Insolation is the incoming solar energy intercepted by the earth. Amount of insolation decreases from the equator toward poles, because sun rays fall vertically on the equator and slant on the poles.

The chapter “Air” from the NCERT Geography book deals with:

Our Environment is the NCERT Geography book for students of Class 7. For NCERT Solutions for Class 7 Social Sciences, visit the linked article.