NCERT Solutions for Class 8 English Unit 4 - The Treasure Within

This unit “The Treasure Within” is about a conversation between Ms Bela Raja who is an editor of Sparsh, a newsletter from the Resource Centre, The Valley School at Bangalore and Mr Hafeez Contractor who is one of India’s topmost architects. This unit particularly portrays that every child is an achiever in his/her own right and his/her learning style and area of interest differs from another child.

Students of 8th Standard can check the English Supplementary textbook – It So Happened for NCERT Solutions as given below. All the textbook and additional exercise questions have been solved by experts in accordance with the updated CBSE English syllabus. To explore the other important subjects of NCERT Solutions of Class 8, students may also want to check the linked article and score good marks in their exams. 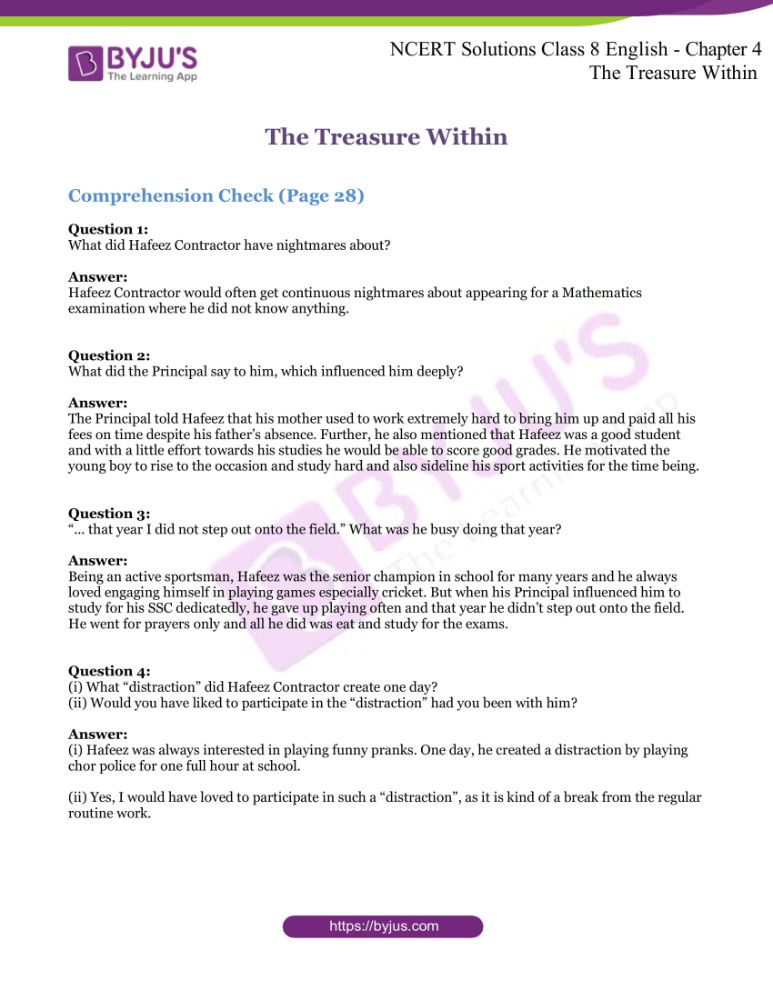 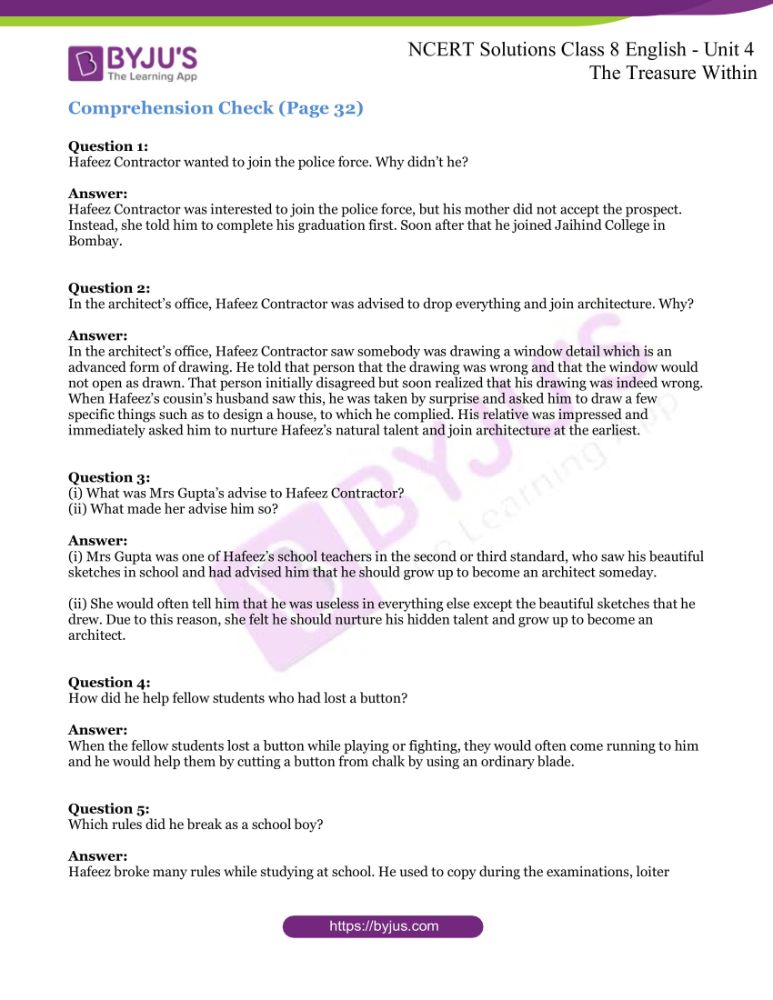 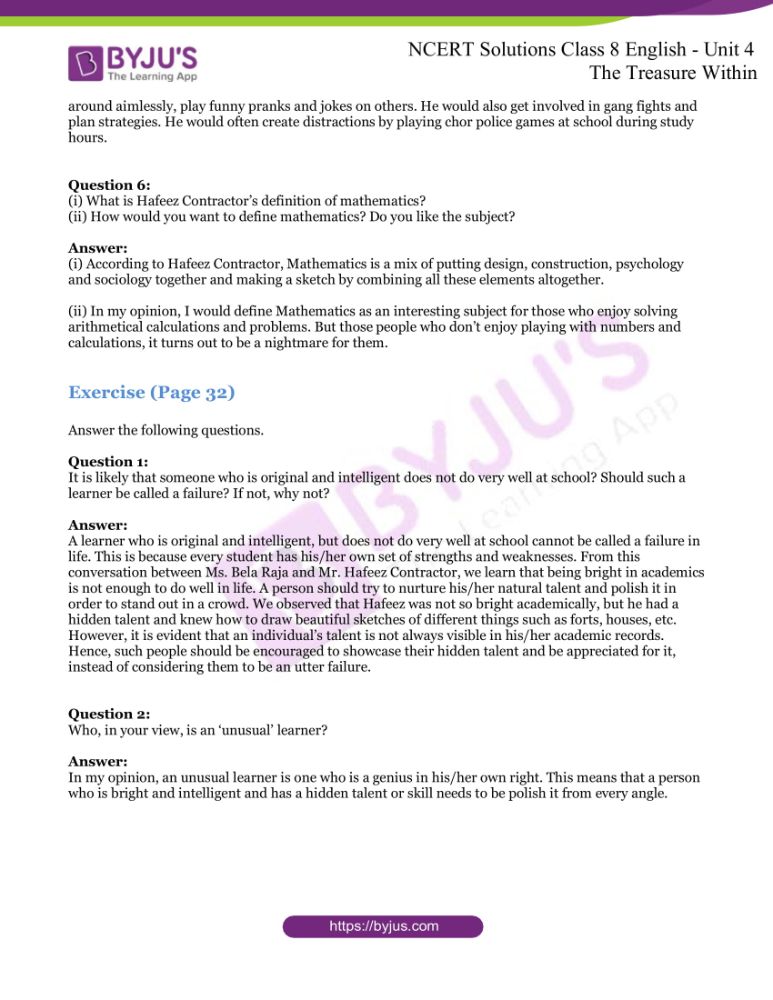 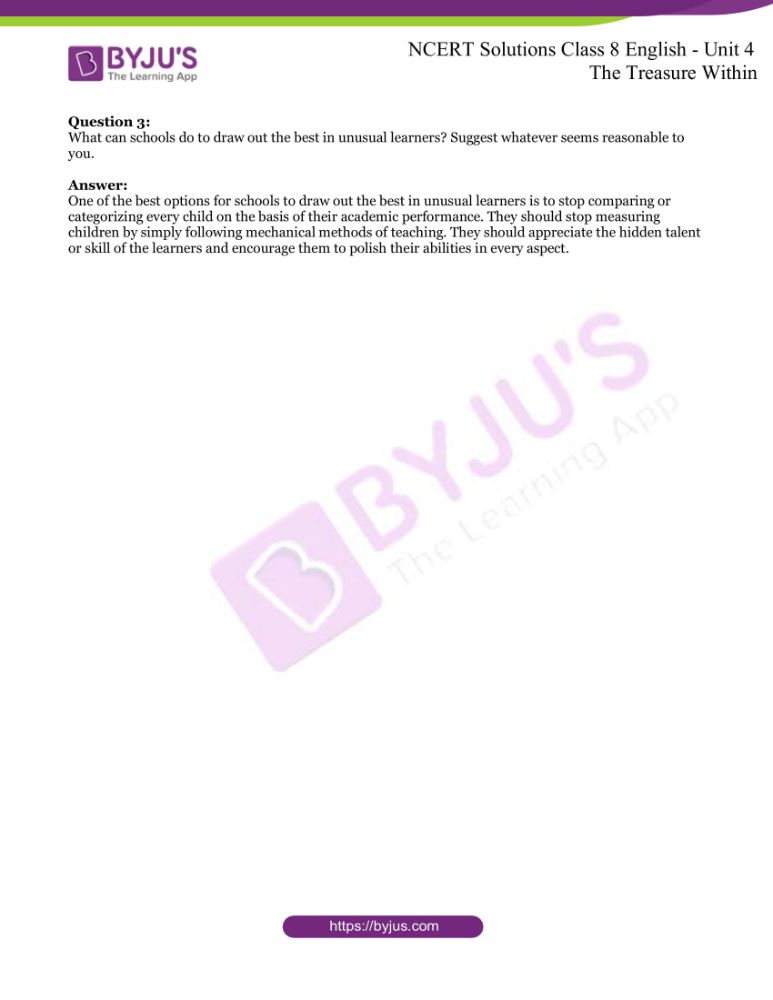 What did Hafeez Contractor have nightmares about?

Hafeez Contractor would often get continuous nightmares about appearing for a Mathematics examination where he did not know anything.

What did the Principal say to him, which influenced him deeply?

The Principal told Hafeez that his mother used to work extremely hard to bring him up and paid all his fees on time despite his father’s absence. Further, he also mentioned that Hafeez was a good student and with a little effort towards his studies he would be able to score good grades. He motivated the young boy to rise to the occasion and study hard and also sideline his sport activities for the time being.

“… that year I did not step out onto the field.” What was he busy doing that year?

Being an active sportsman, Hafeez was the senior champion in school for many years and he always loved engaging himself in playing games especially cricket. But when his Principal influenced him to study for his SSC dedicatedly, he gave up playing often and that year he didn’t step out onto the field. He went for prayers only and all he did was eat and study for the exams.

(i) What “distraction” did Hafeez Contractor create one day?

(ii) Would you have liked to participate in the “distraction” had you been with him?

(i) Hafeez was always interested in playing funny pranks. One day, he created a distraction by playing chor police for one full hour at school.

(ii) Yes, I would have loved to participate in such a “distraction”, as it is kind of a break from the regular routine work.

Hafeez Contractor wanted to join the police force. Why didn’t he?

Hafeez Contractor was interested to join the police force, but his mother did not accept the prospect. Instead, she told him to complete his graduation first. Soon after that he joined Jaihind College in Bombay.

In the architect’s office, Hafeez Contractor was advised to drop everything and join architecture. Why?

In the architect’s office, Hafeez Contractor saw somebody was drawing a window detail which is an advanced form of drawing. He told that person that the drawing was wrong and that the window would not open as drawn. That person initially disagreed but soon realized that his drawing was indeed wrong. When Hafeez’s cousin’s husband saw this, he was taken by surprise and asked him to draw a few specific things such as to design a house, to which he complied. His relative was impressed and immediately asked him to nurture Hafeez’s natural talent and join architecture at the earliest.

(i) What was Mrs Gupta’s advise to Hafeez Contractor?

(ii) What made her advise him so?

(i) Mrs Gupta was one of Hafeez’s school teachers in the second or third standard, who saw his beautiful sketches in school and had advised him that he should grow up to become an architect someday.

(ii) She would often tell him that he was useless in everything else except the beautiful sketches that he drew. Due to this reason, she felt he should nurture his hidden talent and grow up to become an architect.

How did he help fellow students who had lost a button?

When the fellow students lost a button while playing or fighting, they would often come running to him and he would help them by cutting a button from chalk by using an ordinary blade.

Which rules did he break as a school boy?

Hafeez broke many rules while studying at school. He used to copy during the examinations, loiter around aimlessly, play funny pranks and jokes on others. He would also get involved in gang fights and plan strategies. He would often create distractions by playing chor police games at school during study hours.

(i) What is Hafeez Contractor’s definition of mathematics?

(ii) How would you want to define mathematics? Do you like the subject?

(i) According to Hafeez Contractor, Mathematics is a mix of putting design, construction, psychology

and sociology together and making a sketch by combining all these elements altogether.

(ii) In my opinion, I would define Mathematics as an interesting subject for those who enjoy solving arithmetical calculations and problems. But those people who don’t enjoy playing with numbers and calculations, it turns out to be a nightmare for them.

It is likely that someone who is original and intelligent does not do very well at school? Should such a learner be called a failure? If not, why not?

A learner who is original and intelligent, but does not do very well at school cannot be called a failure in life. This is because every student has his/her own set of strengths and weaknesses. From this conversation between Ms. Bela Raja and Mr. Hafeez Contractor, we learn that being bright in academics is not enough to do well in life. A person should try to nurture his/her natural talent and polish it in order to stand out in a crowd. We observed that Hafeez was not so bright academically, but he had a hidden talent and knew how to draw beautiful sketches of different things such as forts, houses, etc. However, it is evident that an individual’s talent is not always visible in his/her academic records. Hence, such people should be encouraged to showcase their hidden talent and be appreciated for it, instead of considering them to be an utter failure.

Who, in your view, is an ‘unusual’ learner?

In my opinion, an unusual learner is one who is a genius in his/her own right. This means that a person who is bright and intelligent and has a hidden talent or skill needs to be polish it from every angle.

What can schools do to draw out the best in unusual learners? Suggest whatever seems reasonable to you.

One of the best options for schools to draw out the best in unusual learners is to stop comparing or categorizing every child on the basis of their academic performance. They should stop measuring children by simply following mechanical methods of teaching. They should appreciate the hidden talent or skill of the learners and encourage them to polish their abilities in every aspect.