This unit “The Fight” is about a petty fight between Ranji and another boy over swimming in a pool inside the forest. Both of them attack each other violently and throw counter-challenges at each other. At the end of the fight, both become good friends and realise that the best solution is not to fight with each other, rather fight together for a better cause.

Meanwhile, Class 8 students can refer to the NCERT Solutions of the English Supplementary textbook – It So Happened here. All the textbook and additional exercise questions have been solved by subject-matter experts, as per the updated CBSE English curriculum. Students can also explore the other important subjects of NCERT Solutions of Class 8 and score good grades in their exams. 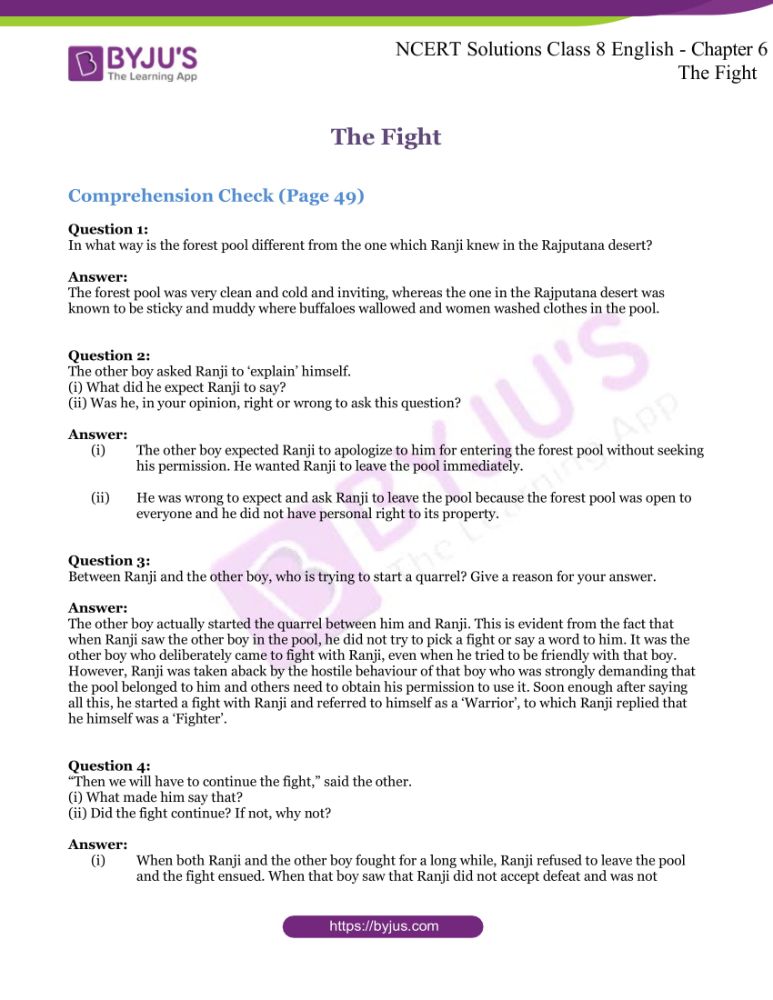 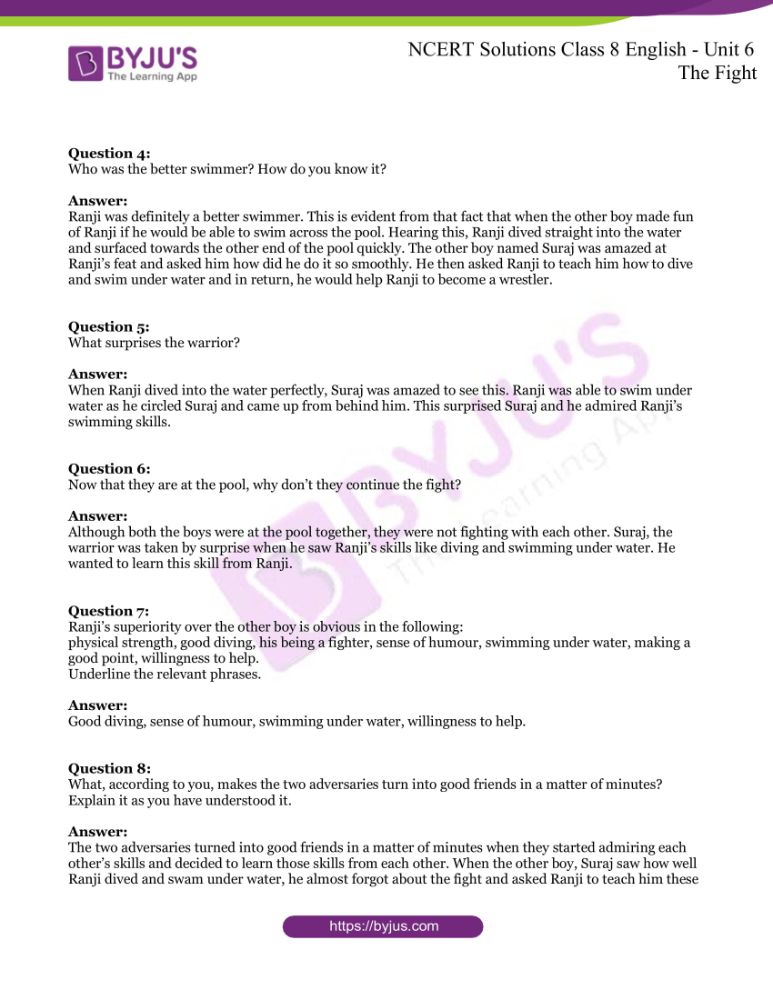 In what way is the forest pool different from the one which Ranji knew in the Rajputana desert?

The forest pool was very clean and cold and inviting, whereas the one in the Rajputana desert was known to be sticky and muddy where buffaloes wallowed and women washed clothes in the pool.

The other boy asked Ranji to ‘explain’ himself.

(i) What did he expect Ranji to say?

(ii) Was he, in your opinion, right or wrong to ask this question?

Between Ranji and the other boy, who is trying to start a quarrel? Give a reason for your answer.

The other boy actually started the quarrel between him and Ranji. This is evident from the fact that when Ranji saw the other boy in the pool, he did not try to pick a fight or say a word to him. It was the other boy who deliberately came to fight with Ranji, even when he tried to be friendly with that boy. However, Ranji was taken aback by the hostile behaviour of that boy who was strongly demanding that the pool belonged to him and others need to obtain his permission to use it. Soon enough after saying all this, he started a fight with Ranji and referred to himself as a ‘Warrior’, to which Ranji replied that he himself was a ‘Fighter’.

“Then we will have to continue the fight,” said the other.

(i) What made him say that?

(ii) Did the fight continue? If not, why not?

What is it that Ranji finds difficult to explain at home?

When Ranji reached home, he found it difficult to explain the cuts and bruises that showed on his face, leg and arms. It was difficult to conceal the fact that he had been in an unusually violent fight with Suraj. Therefore, his mother insisted on his staying at home for the rest of the day.

Ranji sees his adversary in the bazaar.

(ii) What does he actually do, and why?

Ranji is not at all eager for a second fight. Why does he go back to the pool, then?

Although Ranji was not at all eager for a second fight with the other boy, but he left his home unwillingly. He remembered that he had accepted the challenge and he had to defy his enemy in order to gain respect. If he gave up, this meant that he had acknowledged his defeat to the other boy.

Who was the better swimmer? How do you know it?

Ranji was definitely a better swimmer. This is evident from that fact that when the other boy made fun of Ranji if he would be able to swim across the pool. Hearing this, Ranji dived straight into the water and surfaced towards the other end of the pool quickly. The other boy named Suraj was amazed at Ranji’s feat and asked him how did he do it so smoothly. He then asked Ranji to teach him how to dive and swim under water and in return, he would help Ranji to become a wrestler.

What surprises the warrior?

When Ranji dived into the water perfectly, Suraj was amazed to see this. Ranji was able to swim under water as he circled Suraj and came up from behind him. This surprised Suraj and he admired Ranji’s swimming skills.

Now that they are at the pool, why don’t they continue the fight?

Although both the boys were at the pool together, they were not fighting with each other. Suraj, the warrior was taken by surprise when he saw Ranji’s skills like diving and swimming under water. He wanted to learn this skill from Ranji.

Ranji’s superiority over the other boy is obvious in the following:

physical strength, good diving, his being a fighter, sense of humour, swimming under water, making a good point,
willingness to help.

What, according to you, makes the two adversaries turn into good friends in a matter of minutes? Explain it as you have understood it.

The two adversaries turned into good friends in a matter of minutes when they started admiring each other’s skills and decided to learn those skills from each other. When the other boy, Suraj saw how well Ranji dived and swam under water, he almost forgot about the fight and asked Ranji to teach him these swimming skills. Suraj had a well-built physique and when he noticed that Ranji had a lean body structure, he said that he would help him to become a good wrestler if Ranji taught him the swimming skills, to which Ranji readily agreed to help. Finally, the two claimants gave up their fight and became good friends.

Is fighting the only way of resolving differences of opinion? What else can be done to reach a mutually acceptable settlement?

Have you ever been in a serious fight only to realize that it was unnecessary and futile? Share your experience/views with others frankly and honestly.

Yes, it is in human nature to pick a fight on minor issues sometimes. However, such fights or arguments can be resolved through discussion and respecting each other’s point of view. Once both the parties agree to resolve the conflict, they can do it peacefully without hurting each other’s emotions and sentiments.

Why do some of us find it necessary to prove that we are better than others? Will you be amused or annoyed to read the following sign at the back of the car in front of you?

“I may be going slow but I am ahead of you.”

It is common in human nature when one person tries to pull down on another by exhibiting one’s superiority over the other person. We should avoid ego clashes and misunderstandings from creeping into our relationship with other people.

In my opinion, I would be amused to read the sign “I may be going slow but I am ahead of you.” and take it on a lighter note and laugh it off.