NCERT Solutions for Class 8 English Chapter 9 - The Comet - I

NCERT Solutions for Class 8 English Chapter 9 – The Comet – I can be downloaded for free at BYJU’S in PDF format for CBSE students. The NCERT Solutions for Class 8 English link of Chapter 9 is provided below. All the solutions and exercise questions have been attempted by our subject-matter experts, in accordance with the updated CBSE rules and regulations.

This chapter “The Comet – I” is about a new comet that has appeared in the sky and is heading straight towards the earth. A head-on collision is likely and unavoidable, which means this could possibly end life on this planet. It depicts how various scientists and religious leaders react to this critical situation in their own respective ways.

Meanwhile, Class 8 students can refer to the NCERT Solutions of the English Supplementary textbook – It So Happened here. All the textbooks and additional exercise questions are solved by our panel of experts in consideration with the latest CBSE English syllabus. Students can also discover the other important subjects of NCERT Solutions of Class 8 and score well in their exams. 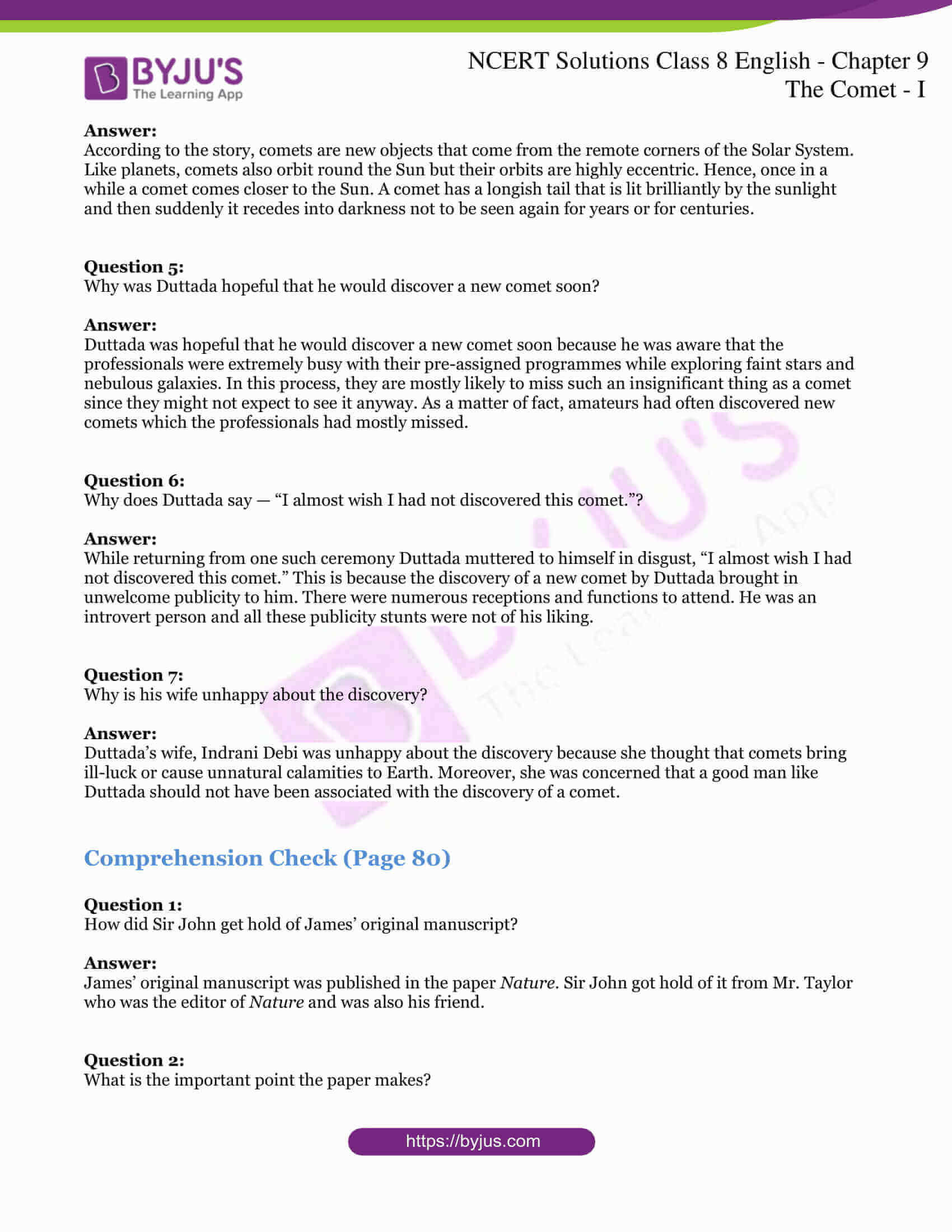 Why does Indrani Debi dislike Duttada’s “hobnobbing” with Dibya?

Duttada was very fond of star gazing and would enjoy spending a lot of time with his telescope “Dibya” trying to discover a comet in the night sky. Indrani Debi disliked Duttada’s “hobnobbing” with Dibya because she thought that the telescope was like a woman who had ensnared her husband and had grabbed all his attention.

She is complaining and smiling. Why is she smiling?

Indrani Debi had complaints about the wretched Dibya, Duttada’s telescope ever since. However, she would often smile it off as she knew how utterly oblivious her husband was of the practical problems of living. Although his doctor had advised him to take special precautions against the cold, he wouldn’t remember to put on a sweater even if it was lying on his bedside chair.

(i) What was Duttada’s secret ambition?

(ii) What did he do to achieve it?

What is the difference between a planet and a comet, as given in the story?

According to the story, comets are new objects that come from the remote corners of the Solar System. Like planets, comets also orbit round the Sun but their orbits are highly eccentric. Hence, once in a while a comet comes closer to the Sun. A comet has a longish tail that is lit brilliantly by the sunlight and then suddenly it recedes into darkness not to be seen again for years or for centuries.

Why was Duttada hopeful that he would discover a new comet soon?

Duttada was hopeful that he would discover a new comet soon because he was aware that the professionals were extremely busy with their pre-assigned programmes while exploring faint stars and nebulous galaxies. In this process, they are mostly likely to miss such an insignificant thing as a comet since they might not expect to see it anyway. As a matter of fact, amateurs had often discovered new comets which the professionals had mostly missed.

Why does Duttada say — “I almost wish I had not discovered this comet.”?

While returning from one such ceremony Duttada muttered to himself in disgust, “I almost wish I had not discovered this comet.” This is because the discovery of a new comet by Duttada brought in unwelcome publicity to him. There were numerous receptions and functions to attend. He was an introvert person and all these publicity stunts were not of his liking.

Why is his wife unhappy about the discovery?

Duttada’s wife, Indrani Debi was unhappy about the discovery because she thought that comets bring ill-luck or cause unnatural calamities to Earth. Moreover, she was concerned that a good man like Duttada should not have been associated with the discovery of a comet.

How did Sir John get hold of James’ original manuscript?

James’ original manuscript was published in the paper Nature. Sir John got hold of it from Mr. Taylor who was the editor of Nature and was also his friend.

What is the important point the paper makes?

The important point that the paper makes is that Comet Dutta is likely to collide with planet Earth soon.

Why does Sir John say that James’ paper should not be published?

Sir John told that James’ paper should not be published because he was fearful that the dreadful news of the inevitable collision of the comet with Earth might cause a lot of panic around the world.

What do the two men finally decide to do?

The two men finally decide to organize an important secret conference of international experts to chalk out a plan to avert this impending calamity.