NCERT Solutions for Class 9 Geography Chapter 1 “India-Size And Location” contains the solutions to the exercises given in ‘Contemporary India’. This will help you with the right NCERT Solutions to the exercises provided at the end of every chapter. The answers will be useful for school exams as most of the questions are asked from the NCERT textbooks. So, students can study these solutions and score high in their exams. 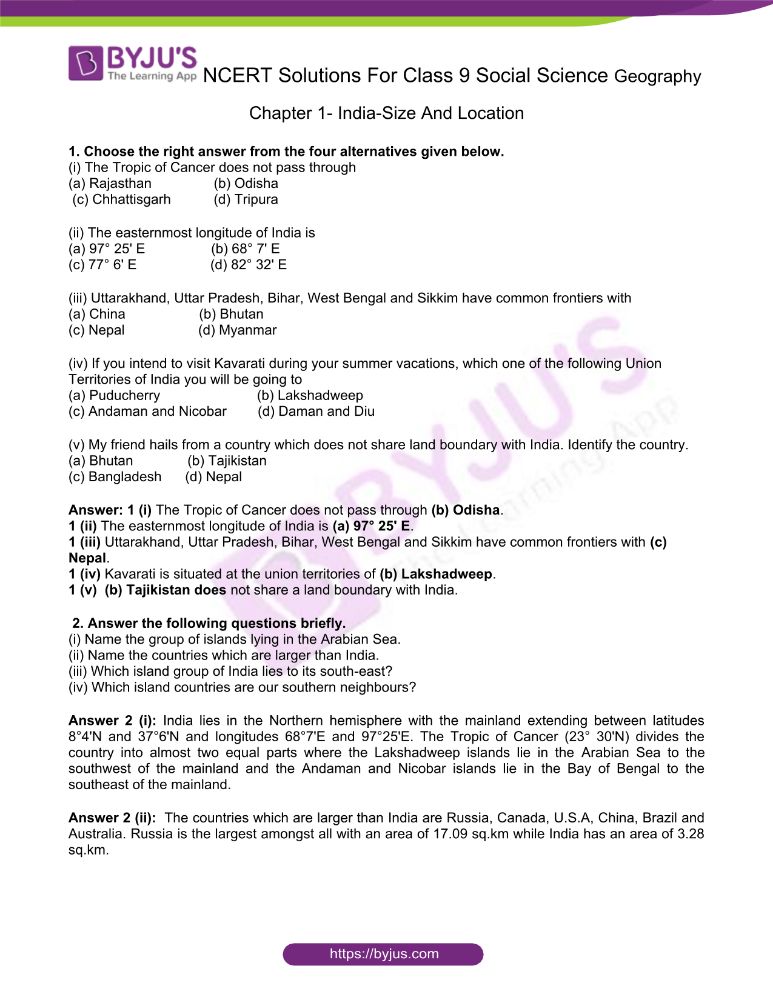 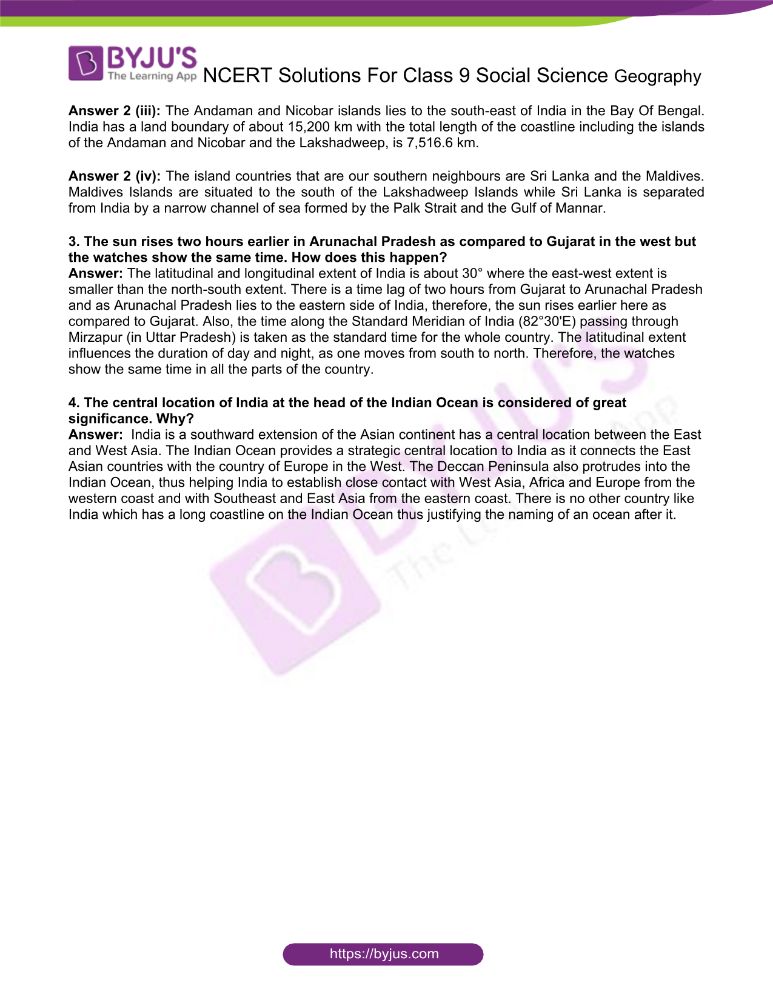 The solutions for chapter 1, India-Size And Location are given below. Students should also check NCERT Solutions for Class 9 for other subjects.

(i) The Tropic of Cancer does not pass through

(a) Rajasthan (b) Odisha

(ii) The easternmost longitude of India is

(iv) If you intend to visit Kavarati during your summer vacations, which one of the following Union Territories of India you will be going to

(a) Puducherry (b) Lakshadweep

(v) My friend hails from a country which does not share land boundary with India. Identify the country.

(a) Bhutan (b) Tajikistan

(i) The Tropic of Cancer does not pass through – (b) Odisha.

(iv) Kavarati is situated at the union territories of (b) Lakshadweep.

(v) (b) Tajikistan does not share a land boundary with India.

(i) Name the group of islands lying in the Arabian Sea.

(ii) Name the countries which are larger than India.

(iii) Which island group of India lies to its south-east?

(iv) Which island countries are our southern neighbours?

(ii): The countries which are larger than India are Russia, Canada, U.S.A, China, Brazil and Australia. Russia is the largest of all countries, with an area of 17.09 sq.km, while India has an area of 3.28 sq.km.

(iv): The island countries that are our southern neighbours are Sri Lanka and the Maldives. Maldives Islands are situated to the south of the Lakshadweep Islands, whereas Sri Lanka is separated from India by a narrow channel of sea formed by the Palk Strait and the Gulf of Mannar.

3. The sun rises two hours earlier in Arunachal Pradesh as compared to Gujarat in the west but the watches show the same time. How does this happen?

The latitudinal and longitudinal extent of India is about 30°. The east-west extent is smaller than the north-south extent. There is a time lag of two hours from Gujarat to Arunachal Pradesh. As Arunachal Pradesh lies to the eastern side of India, the sun rises here earlier when compared to Gujarat. The time along the Standard Meridian of India (82°30’E) passing through Mirzapur (in Uttar Pradesh) is taken as the standard time for the whole country. The latitudinal extent influences the duration of day and night, as one moves from south to north. Therefore, the watches show the same time in all the parts of the country.

4. The central location of India at the head of the Indian Ocean is considered of great significance. Why?

India is a southward extension of the Asian continent and is located in a central position between the East and West Asia. The Indian Ocean provides a strategic central location to India, as it connects the East Asian countries with the country of Europe in the West. The Deccan Peninsula also protrudes into the Indian Ocean, thus helping India establish close contact with West Asia, Africa and Europe from the western coast and with Southeast and East Asia from the eastern coast. There is no other country like India in the world, which has a long coastline on the Indian Ocean and thus, justifying the naming of an ocean after it.

1. Size and location of India

2. India and the world

a. Indian Ocean- the central location of India.

b. What are the countries that lie on the eastern coast and the western coast of India?

c. What are the neighbouring countries of India?

Apart from this chapter, the full set of NCERT Solutions for Class 9 Social Sciences consisting of chapter-wise answers for Geography, History, Political Science and Economics are also provided for your studies.