According to the Revised term-wise CBSE Syllabus 2021-22, this chapter has been removed.

NCERT Solutions for Class 9 Geography Chapter 6 Population contains the answers to all the questions. This chapter discusses population size and distribution, population growth, the process of population change and growth. NCERT Solutions contain the answers which are prepared by individual subject experts. The answers are written in a simple language for students’ easy understanding. Learning these solutions will help students to score high marks. 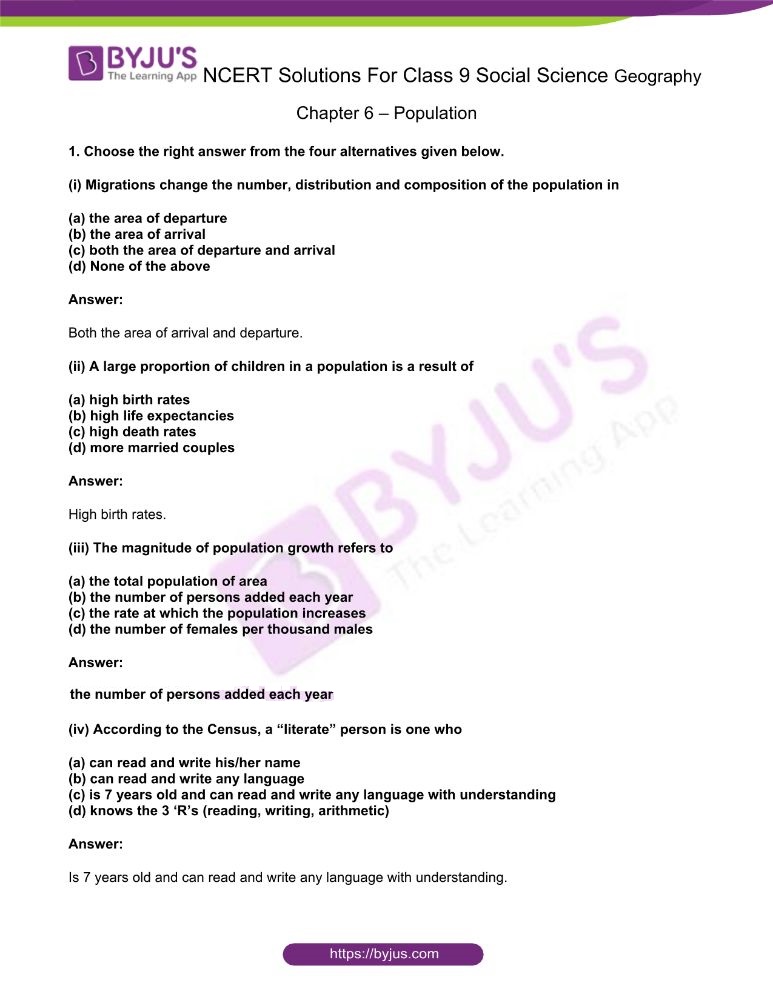 (i) Migrations change the number, distribution and composition of the population in

(a) the area of departure

(b) the area of arrival

(c) both the area of departure and arrival

Both the area of arrival and departure.

(iii) The magnitude of population growth refers to

(a) the total population of area

(b) the number of persons added each year

(c) the rate at which the population increases

(d) the number of females per thousand males

the number of persons added each year

(iv) According to the Census, a “literate” person is one who

(a) can read and write his/her name

(b) can read and write any language

Is 7 years old and can read and write any language with understanding.

(i) Why is the rate of population growth in India declining since 1981?

The decline is due to greater awareness and usage of birth control measures.

Age structure: Refers to the number of people in different age groups in that population.

Death Rate: The number of deaths per thousand persons in a year.

Birth Rate: The number of live births per thousand persons in a year.

(iv) How is migration a determinant factor of population change?

Because it changes the demographics of a country.

4. What is the relation between occupational structure and development?

The higher percentage of the population involved in a primary occupation like agriculture, animal husbandry, forestry and fishing implies – Less developed country.

We see more development in countries where people move into secondary occupations like manufacturing.

A high percentage of the population involved in a tertiary occupation like Banking, commerce, transport, and administration – implies a highly developed country.

5. What are the advantages of having a healthy population?

6. What are the significant features of the National Population Policy 2000?

Recognising that the planning of families would improve individual health and welfare, the Government of India initiated a comprehensive Family Planning Programme in 1952. The Family Welfare Programme has sought to promote responsible and planned parenthood on a voluntary basis. The National Population Policy (NDP) 2000 is a culmination of years of planned efforts. The NPP 2000 provides a policy framework for imparting free and compulsory school education up to 14 years of age, reducing the infant mortality rate to below 30 per 1000 live births, achieving universal immunisation of children against all vaccine-preventable diseases, promoting delayed marriage for girls and making family welfare a people-centred programme.

Chapter 6 – Population NCERT Geography Class 9 discusses the importance of human population in terms of growth and development. The population is a pivotal element in Social Studies. It is the point of reference from which all other elements are observed and from which they derive significance and meaning. ‘Resources’, ‘calamities’ and ‘disasters’ are all meaningful only in relation to human beings. The three major points of importance discussed in this chapter are mentioned below:

Population with respect to India has been discussed in this chapter. The distribution of population and population growth is also the concern of the people in the country. Different mediums are used to calculate the growth rate of the country every year, and the population is calculated based on it. Topics like death rate, birth rate and migration are the major reasons for population growth and development.

Literacy rate, sex ratio, occupational structure adolescent population, health and national population policy are among the other important topics that students will study in this chapter.

Can students get their doubts cleared by referring to the NCERT Solutions for Class 9 Geography Chapter 6?

Students who are unable to get their doubts cleared during school hours can utilise the NCERT Solutions of BYJU’S for the purpose. Subject experts have framed these solutions carefully with the prime objective of helping students with their annual exam preparation. To achieve high marks in Social Studies, learning the answers to the textbook question is essential. The concepts are explained in an interactive and detailed manner to aid students to seize them and perform well in the annual exams.

What are the important questions that students can expect from Chapter 6 of NCERT Solutions for Class 9 Geography in the exams?

The important questions from exam perspective that students can expect are:
1. What is the relation between occupational structure and development?
2. What are the significant features of the National Population Policy 2000?
3. What are the advantages of having a healthy population?
4. Distinguish between population growth and population change.

Why should I refer to the NCERT Solutions for Class 9 Geography Chapter 6 from BYJU’S?

If you want to learn the correct answers to the textbook questions that are according to the CBSE guidelines, all at one place then the NCERT Solutions for Class 9 Geography Chapter 6 from BYJU’S is the resource you will need. Students aspiring to score high marks can effectively utilise these resources for revision purposes and also to clarify doubts instantly. The solutions are framed by expert faculty members at BYJU’S based on the understanding abilities of Class 9 students. All the solutions are created in a neat presentable manner using bulletins wherever required to meet the CBSE standards. Most importantly, the solutions are updated according to the latest CBSE syllabus.