NCERT Solutions for Class 9 Geography Chapter 3 Drainage has questions related to the drainage system of India. The drainage system describes the river system of India. The chapter mainly deals with the Himalayan rivers, peninsular rivers, lakes and the role of rivers in the economy and river pollution. To get the answers of all the 6 questions provided in the exercise, go through the NCERT Solutions Class 9 Geography Chapter 3 Drainage. These solutions are created as per the NCERT book. Students can refer to these solutions while preparing for their CBSE Term II exams. 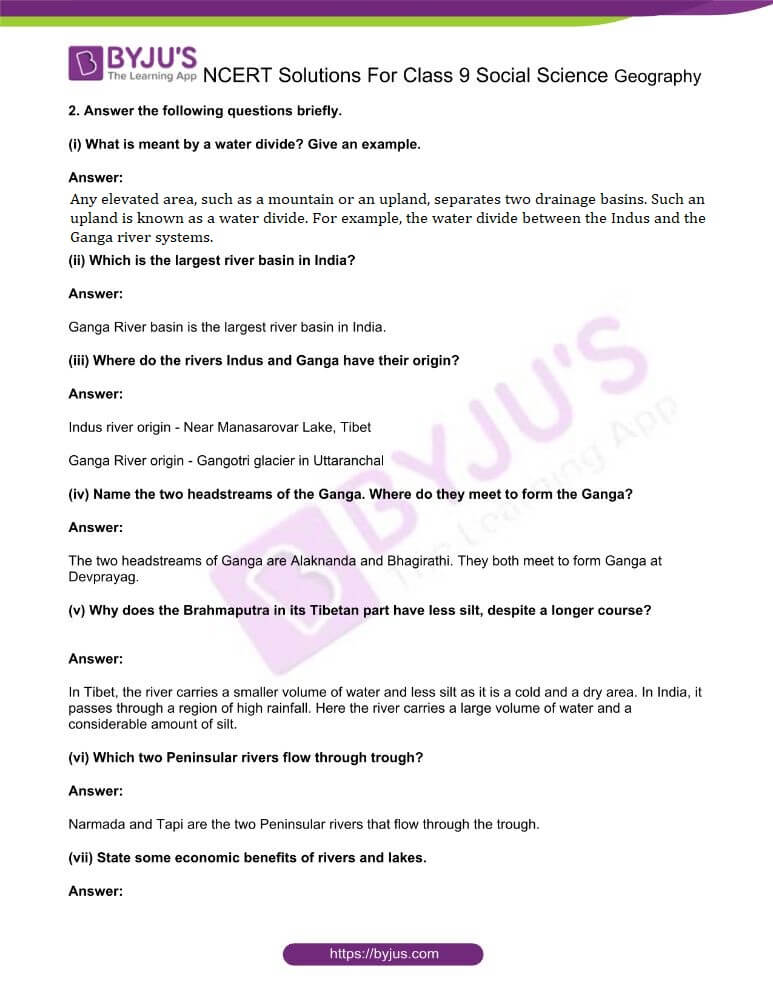 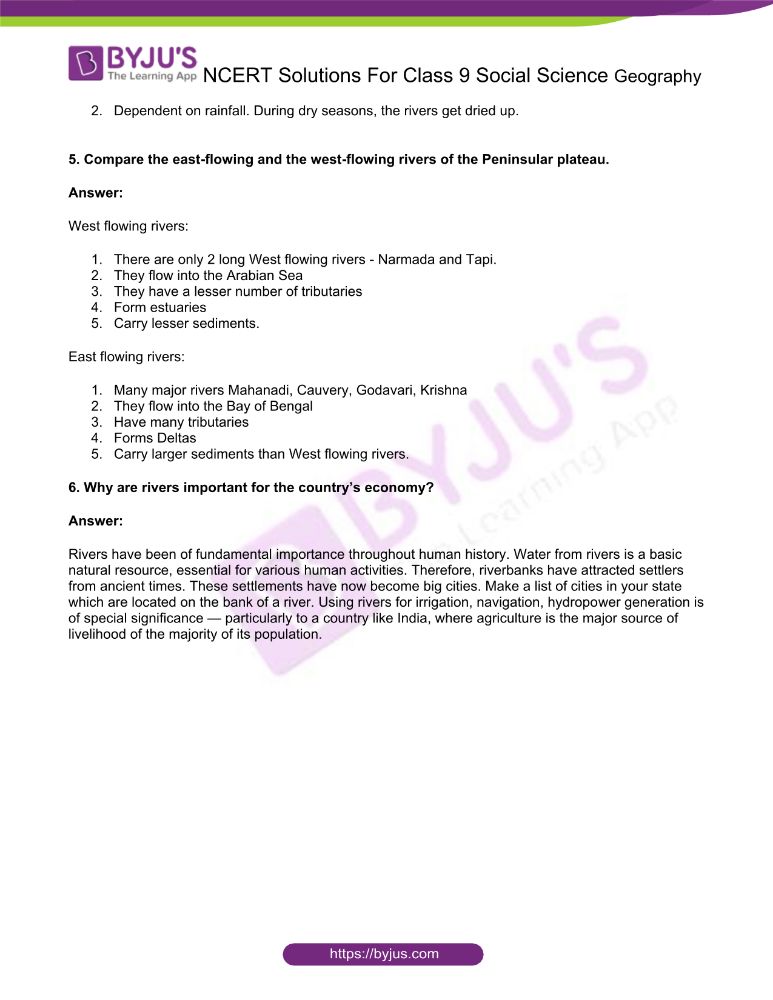 The solutions for Chapter 3 of Geography are given below. Students should also check NCERT Solutions for Class 9 for other subjects.

(i) In which of the following states is the Wular lake located?

(ii) The river Narmada has its source at

(a) Satpura (b) Amarkantak (c) Brahmagiri (d) Slopes of the Western Ghat.

(iii) Which one of the following lakes is a saltwater lake?

(iv) Which one of the following is the longest river in Peninsular India?

(v) Which one amongst the following rivers flows through a rift valley?

(i) What is meant by a water divide? Give an example.

Any elevated area, such as a mountain or an upland, separates two drainage basins. Such an upland is known as a water divide. For example, the water divide between the Indus and the Ganga river systems.

(ii) Which is the largest river basin in India?

(iii) Where do the rivers Indus and Ganga have their origin?

(iv) Name the two headstreams of the Ganga. Where do they meet to form the Ganga?

The two headstreams of Ganga are Alaknanda and Bhagirathi. They both meet to form Ganga at Devprayag.

(v) Why does the Brahmaputra in its Tibetan part have less silt, despite a longer course?

(vi) Which two Peninsular rivers flow through a trough?

Narmada and Tapi are the two Peninsular rivers that flow through a trough.

(vii) State some economic benefits of rivers and lakes.

Rivers have been of fundamental importance throughout human history. Water from rivers is a basic natural resource, essential for various human activities. Therefore, riverbanks have attracted settlers from ancient times. Using rivers for irrigation, navigation and hydropower generation is of special significance — particularly to a country like India, where agriculture is the major source of livelihood of the majority of its population.

4. Discuss the significant difference between the Himalayan and the Peninsular rivers.

5. Compare the east-flowing and the west-flowing rivers of the Peninsular plateau.

6. Why are rivers important for the country’s economy?

Rivers have been of fundamental importance throughout human history. Water from rivers is a basic natural resource, essential for various human activities. Therefore, riverbanks have attracted settlers from ancient times. These settlements have now become big cities. Make a list of cities in your state which are located on the bank of a river. Using rivers for irrigation, navigation, hydropower generation is of special significance — particularly to a country like India, where agriculture is the major source of livelihood for the majority of its population.

The term drainage describes the river system of an area. The area drained by a single river basin is called a drainage basin. Chapter 3 Drainage of NCERT Class 9 Geography books – ‘Contemporary India I’ deals with the drainage system of India. The below-mentioned topics have been discussed in detail in this chapter:

4. Role of Rivers in Economy

Students will also study the causes of river pollution and how it will affect society. Also, the concerns related to the increasing river pollution will help students learn how saving resources like water bodies can help in creating a better environment to live in.

Students can refer to the full set of NCERT Solutions for Class 9 Social Science to get answers from the Geography, History, Political Science and Economics textbook.

List out the topics covered in Chapter 3 of NCERT Solutions for Class 9 Geography?

How can students score high marks in the CBSE Term II exams using the NCERT Solutions for Class 9 Geography Chapter 3?

Before kickstarting with CBSE Term II exam preparations, it’s important that students know about the complete syllabus first. Later, a solid study plan allotting time for all the topics has to be created. The NCERT Solutions at BYJU’S provide answers to all the textbook questions to sharpen the conceptual knowledge and problem-solving skills of students. The key topics in the chapter are highlighted so that students can prioritise learning during their study time. All the solutions PDF can be accessed using the download option for free without any time restrictions .

What can be learned about the west-flowing rivers of the peninsular plateau from Chapter 3 of NCERT Solutions for Class 9 Geography.

There are only 2 long west-flowing rivers – Narmada and Tapi. They flow into the Arabian Sea and have a lesser number of tributaries. They form estuaries and carry lesser sediments. To learn more about the main topics and attain a strong grip over them, students should refer to the NCERT Solutions created by individual subject matter experts at BYJU’S.