NCERT Solutions for Class 9 Geography Chapter 2 Physical Features of India contains the answers to the exercises at the end of the chapter. The questions in the exercise are mainly related to the physiographic divisions of India such as the Himalayan Mountains, the Northern Plains, the Peninsular Plateau, the Indian Desert, the Coastal Plains and the Islands. The NCERT Solutions are easy and accurate, which will align school students’ preparation as per the questions asked in the CBSE Term I examinations. 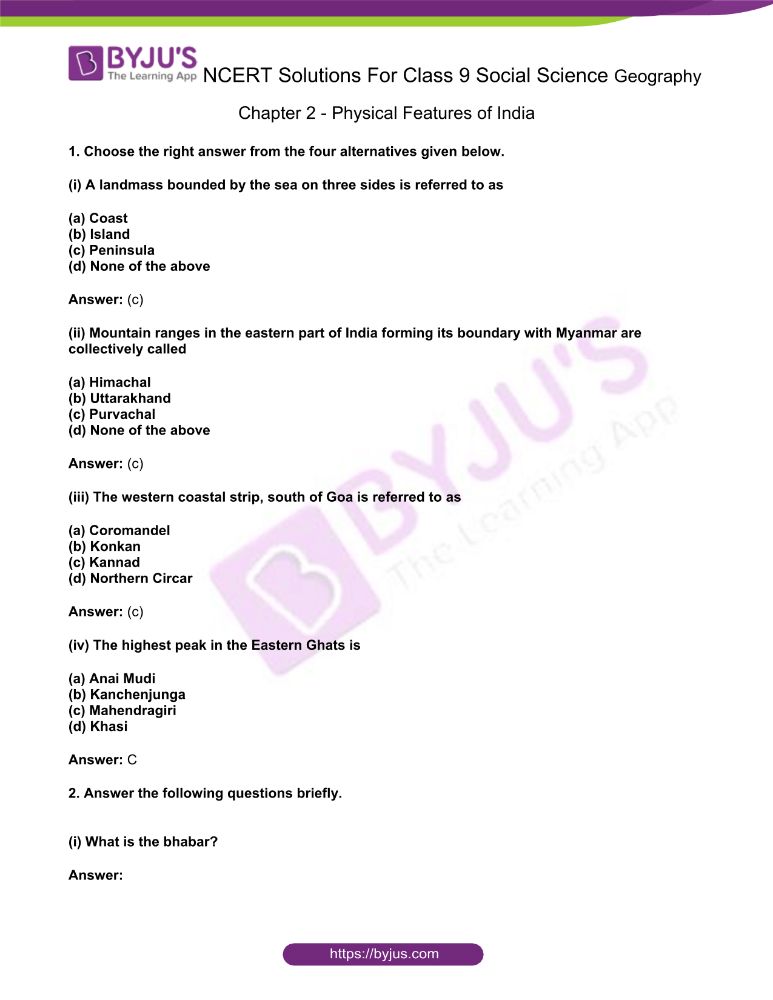 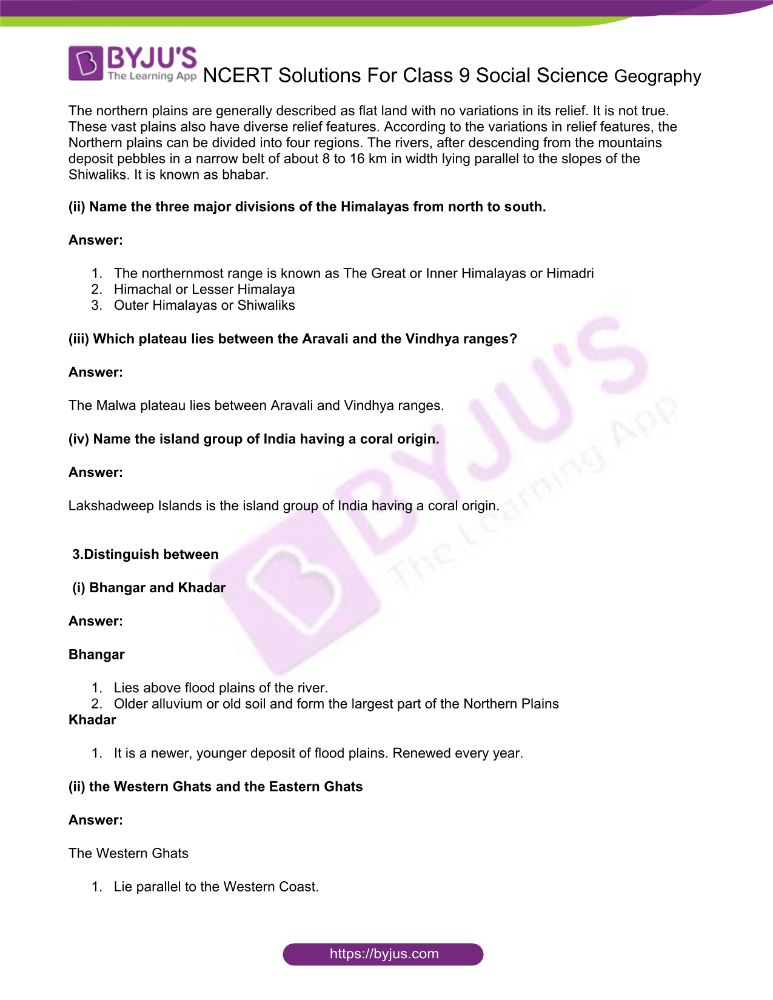 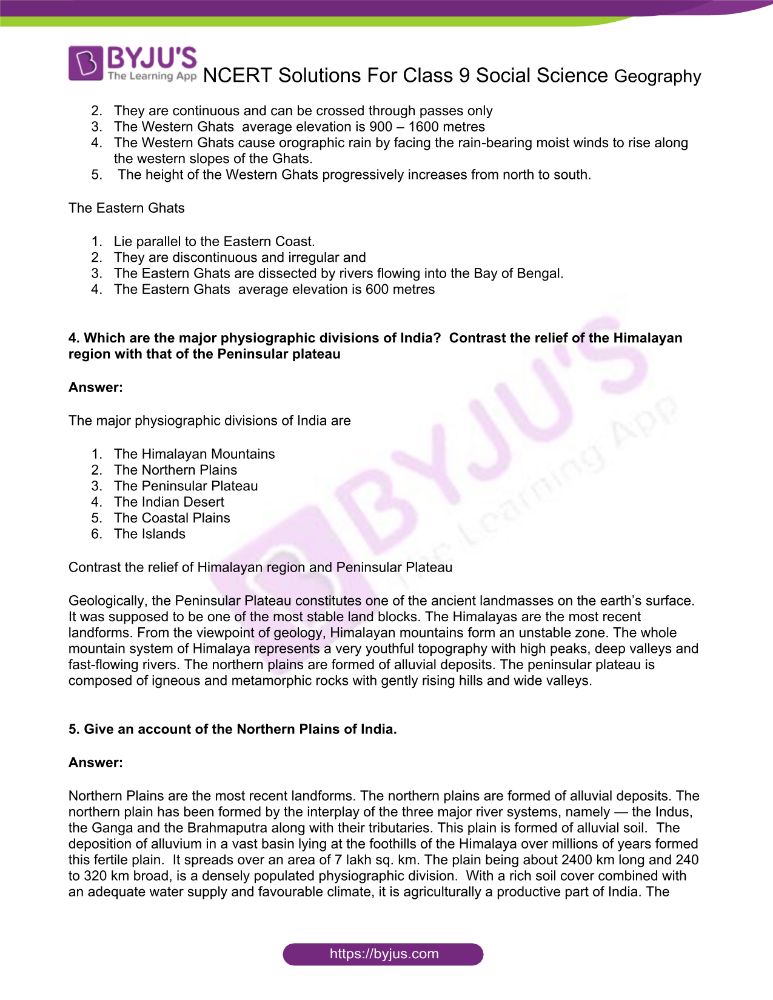 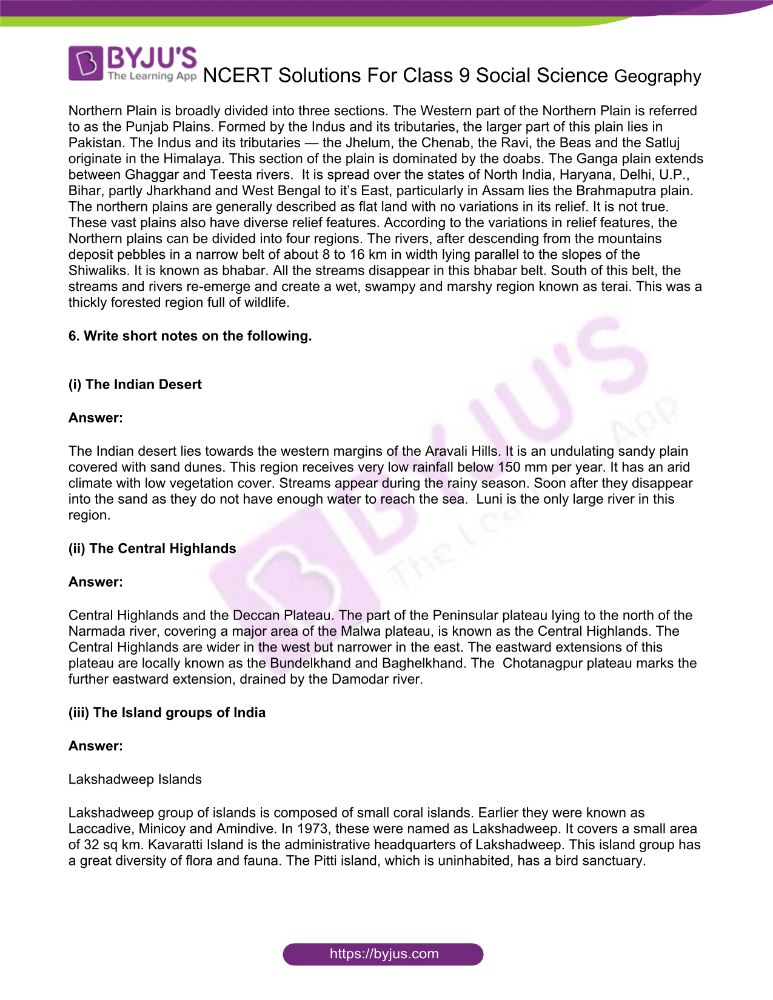 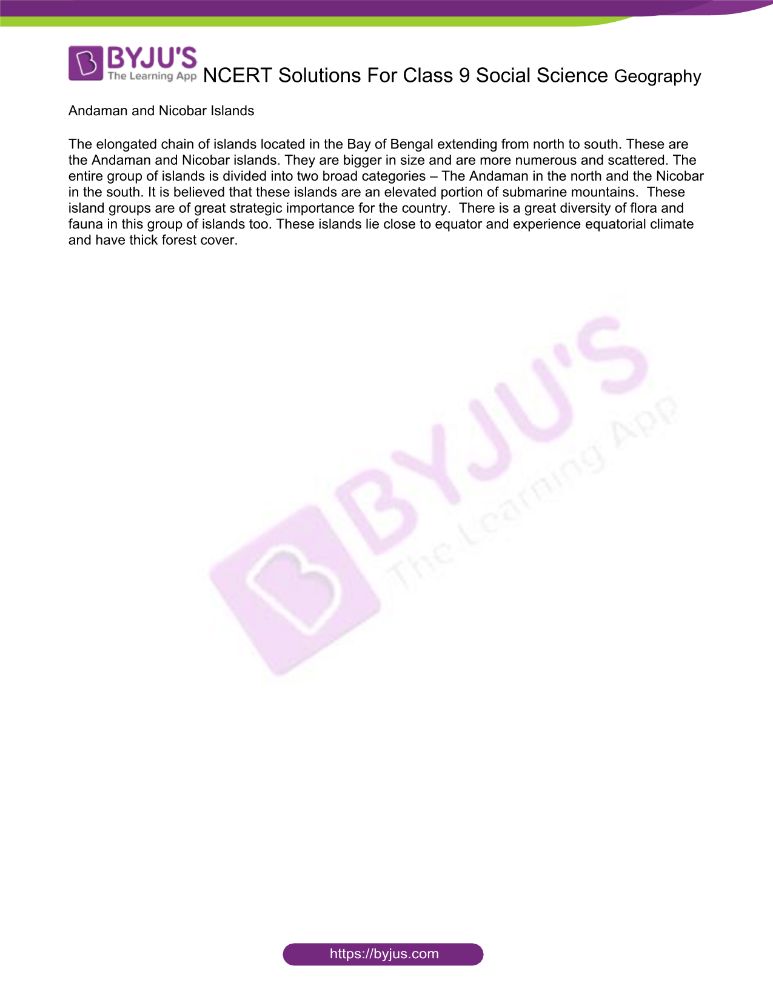 (iii) The western coastal strip, south of Goa is referred to as

(iv) The highest peak in the Eastern Ghats is

The northern plains are generally described as flatlands, with no variations in its relief. But, It is not true. These vast plains also have diverse relief features. According to the variations in relief features, the Northern plains can be divided into four regions. The rivers, after descending from the mountains deposit pebbles in a narrow belt of about 8 to 16 km in width lying parallel to the slopes of the Shiwaliks. This region is known as bhabar.

(ii) Name the three major divisions of the Himalayas from north to south.

(iii) Which plateau lies between the Aravali and the Vindhya ranges?

The Malwa plateau lies between Aravali and Vindhya ranges.

(iv) Name the island group of India having a coral origin.

Lakshadweep Islands is the island group of India having with a coral origin.

(i) Bhangar and Khadar

4. Which are the major physiographic divisions of India? Contrast the relief of the Himalayan region with that of the Peninsular plateau

The major physiographic divisions of India are

Contrast the relief of Himalayan region and Peninsular Plateau

Geologically, the Peninsular Plateau constitutes one of the ancient landmasses on the earth’s surface. It was supposed to be one of the most stable land blocks. The Himalayas are the most recent landforms. From the viewpoint of geology, Himalayan mountains form an unstable zone. The whole mountain system of Himalaya represents a very youthful topography with high peaks, deep valleys and fast-flowing rivers. The northern plains are formed of alluvial deposits. The peninsular plateau is composed of igneous and metamorphic rocks with gently rising hills and wide valleys.

5. Give an account of the Northern Plains of India.

Northern Plains are the most recent landforms. The northern plains are formed of alluvial deposits. The northern plain has been formed by the interplay of the three major river systems, namely — the Indus, the Ganga and the Brahmaputra along with their tributaries. This plain is formed of alluvial soil. The deposition of alluvium in a vast basin lying at the foothills of the Himalaya over millions of years formed this fertile plain. It spreads over an area of 7 lakh sq. km. The plain being about 2400 km long and 240 to 320 km broad, is a densely populated physiographic division. With a rich soil cover combined with an adequate water supply and favourable climate, it is agriculturally a productive part of India. The Northern Plain is broadly divided into three sections. The Western part of the Northern Plain is referred to as the Punjab Plains. Formed by the Indus and its tributaries, the larger part of this plain lies in Pakistan. The Indus and its tributaries — the Jhelum, the Chenab, the Ravi, the Beas and the Satluj all originate in the Himalaya. This section of the plain is dominated by the doabs. The Ganga plain extends between Ghaggar and Teesta rivers. It is spread over the northern states of Haryana, Delhi, U.P., Bihar and partly Jharkhand. The Ganga plains also extend towards Bengal to it’s east. Further east, in Assam lies the Brahmaputra plain. The northern plains are generally described as flatlands with no variations in its relief. However, this is not exactly true. These vast plains also have diverse relief features. According to the variations in relief features, the Northern plains can be divided into four regions. The rivers, after descending from the mountains, deposit pebbles in a narrow belt of about 8 to 16 km in width lying parallel to the slopes of the Shiwaliks. This region is known as bhabar. All the streams disappear in this bhabar belt. South of this belt, the streams and rivers re-emerge and create a wet, swampy and marshy region known as terai. This was once a thickly forested region, full of wildlife.

6. Write short notes on the following.

(i) The Indian Desert

The Indian desert lies towards the western margins of the Aravali Hills. It is an undulating sandy plain covered with sand dunes. This region receives very low rainfall. The average rainfall is below 150 mm per year. It has an arid climate with low vegetation cover. Streams appear during the rainy season. Soon after they disappear into the sand as they do not have enough water to reach the sea. Luni is the only large river in this region.

(iii) The Island groups of India

Lakshadweep group of islands is composed of small coral islands. Earlier they were known as Laccadive, Minicoy and Amindive. In 1973, these were re-named as Lakshadweep. It covers a small area of 32 sq km. Kavaratti Island is the administrative headquarters of Lakshadweep. This island group has a great diversity of flora and fauna. The Pitti island, which is uninhabited, has a bird sanctuary.

The elongated chain of islands located in the Bay of Bengal extending from north to south. These are the Andaman and Nicobar islands. They are bigger in size and are more numerous and scattered. The entire group of islands is divided into two broad categories – The Andaman in the north and the Nicobar in the south. It is believed that these islands are an elevated portion of submarine mountains. These island groups are of great strategic importance for the country. There is a great diversity of flora and fauna in this group of islands too. These islands lie close to the equator and experience equatorial climate and have thick forest cover.

NCERT Geography Class 9, Chapter 2 – Physical Features of India discusses the major physical features of the country, which includes land, plateau, mountains, deserts and islands. The Major Physiographic Divisions of India have been discussed in detail. These include:

Apart from this chapter, the full set of NCERT Solutions for Class 9 Social Science is also provided for students preparation.

What questions can students anticipate from Chapter 2 of NCERT Solutions for Class 9 Geography in the exams?

Here are some of the questions that students can expect from Chapter 2 of NCERT Solutions for Class 9 Geography in exams –
1. Give an account of the Northern Plains of India.
2. Write short notes on: (i) The Island groups of India (ii) The Indian Desert
3. Distinguish between the Western Ghats and the Eastern Ghats
4. What is bhabar?


Which are the major physiographic divisions of India discussed in the NCERT Solutions for Class 9 Geography Chapter 2?

The major physiographic divisions of India discussed in the NCERT Solutions for Class 9 Geography Chapter 2 are:
1. The Himalayan Mountains
2. The Northern Plains
3. The Peninsular Plateau
4. The Indian Desert
5. The Coastal Plains
6. The Islands
Students can obtain more insights about the important topics present in this chapter by referring to the NCERT Solutions created by subject experts at BYJU’S.

Where can students find the NCERT Solutions for Class 9 Geography Chapter 2 PDF online?

Students can find and download the NCERT Solutions for Class 9 Geography Chapter 2 PDF from the links at BYJU’S for free. Students simply need to register themselves on the website to access the resources based on their needs. The solutions comprise detailed and clear explanations of important topics with illustrations, diagrams and maps wherever required. In addition, all the solutions are updated regularly as per the CBSE syllabus to aid students score maximum marks in their annual exams. Further, students will learn the right methods of answering the textbook questions and improve on their time management skills.